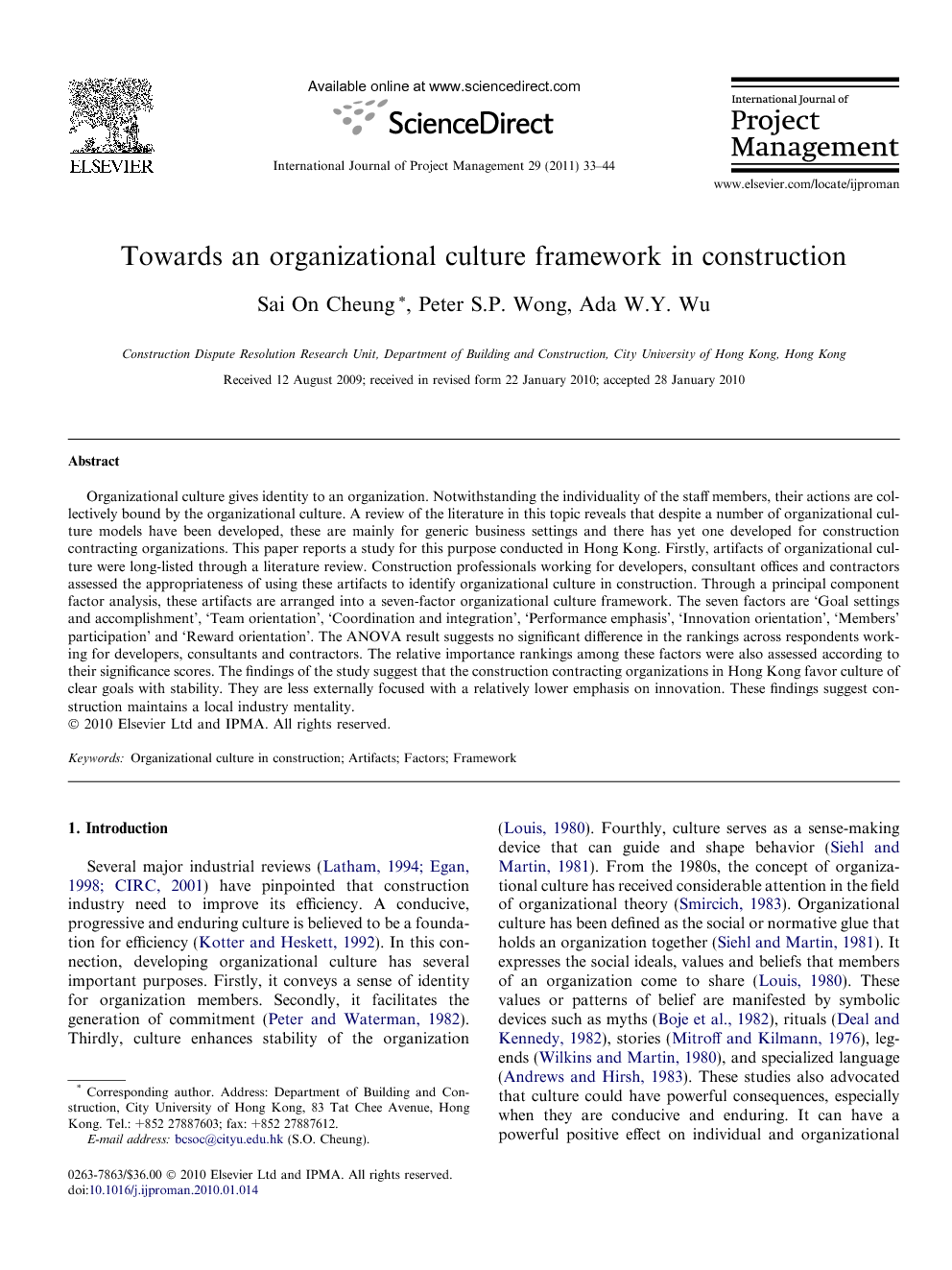 Organizational culture gives identity to an organization. Notwithstanding the individuality of the staff members, their actions are collectively bound by the organizational culture. A review of the literature in this topic reveals that despite a number of organizational culture models have been developed, these are mainly for generic business settings and there has yet one developed for construction contracting organizations. This paper reports a study for this purpose conducted in Hong Kong. Firstly, artifacts of organizational culture were long-listed through a literature review. Construction professionals working for developers, consultant offices and contractors assessed the appropriateness of using these artifacts to identify organizational culture in construction. Through a principal component factor analysis, these artifacts are arranged into a seven-factor organizational culture framework. The seven factors are ‘Goal settings and accomplishment’, ‘Team orientation’, ‘Coordination and integration’, ‘Performance emphasis’, ‘Innovation orientation’, ‘Members’ participation’ and ‘Reward orientation’. The ANOVA result suggests no significant difference in the rankings across respondents working for developers, consultants and contractors. The relative importance rankings among these factors were also assessed according to their significance scores. The findings of the study suggest that the construction contracting organizations in Hong Kong favor culture of clear goals with stability. They are less externally focused with a relatively lower emphasis on innovation. These findings suggest construction maintains a local industry mentality.

Several major industrial reviews (Latham, 1994, Egan, 1998 and CIRC, 2001) have pinpointed that construction industry need to improve its efficiency. A conducive, progressive and enduring culture is believed to be a foundation for efficiency (Kotter and Heskett, 1992). In this connection, developing organizational culture has several important purposes. Firstly, it conveys a sense of identity for organization members. Secondly, it facilitates the generation of commitment (Peter and Waterman, 1982). Thirdly, culture enhances stability of the organization (Louis, 1980). Fourthly, culture serves as a sense-making device that can guide and shape behavior (Siehl and Martin, 1981). From the 1980s, the concept of organizational culture has received considerable attention in the field of organizational theory (Smircich, 1983). Organizational culture has been defined as the social or normative glue that holds an organization together (Siehl and Martin, 1981). It expresses the social ideals, values and beliefs that members of an organization come to share (Louis, 1980). These values or patterns of belief are manifested by symbolic devices such as myths (Boje et al., 1982), rituals (Deal and Kennedy, 1982), stories (Mitroff and Kilmann, 1976), legends (Wilkins and Martin, 1980), and specialized language (Andrews and Hirsh, 1983). These studies also advocated that culture could have powerful consequences, especially when they are conducive and enduring. It can have a powerful positive effect on individual and organizational performance that is of increasing concern with the ever-increasing competitive environment (Kotter and Heskett, 1992, Wilkins and Ouchi, 1983 and Lim, 1995). A number of studies seeking to relate organizational culture and performance have been reported (Wilkins and Ouchi, 1983, Peter and Waterman, 1982, Kanter, 1983, Denison, 1984, Hansen and Wernerfelt, 1989, Gordon and DiTomaso, 1992, Safford, 1988 and Wilderom et al., 2000). Most of these studies employed correlation analysis and found significant statistical correlation between organizational culture and performance (Calori and Samin, 1991 and Petty et al., 1995).One of the early influential studies on organizational culture was on its definition and implications for managers. Schein (1986) advocated the organizational culture/leadership model and defined ‘culture’ as a pattern of basic assumptions – invented, discovered, or developed by a given group as it learns to cope with its problems of external adaptation and internal integration. Organizational culture thus serves the leader of an organization through nurturing the value system created by him to both serving and incoming members. According to Schein (1986), a strong culture is therefore one where the implicit and explicit assumptions are in harmony. Schein (1986) further pointed out that there may be several cultures operating within an organization: managerial culture that is occupationally based, group culture that is derived from geographical proximity, and worker culture that is based on shared hierarchical experiences. The organization as a whole will have an overall culture “if that whole organization has a significant shared history”. Furthermore, Cole (1997) considered culture as a two-tiered set of “shared values, norms and beliefs within an organization”. On the surface is the explicit culture, which manifests itself in the ‘official’ organizational and communication structure. Beneath the surface is the implicit culture that management and staff consider of real importance. Cole (1997) believes that implicit culture is probably closer to reality. This conception is similar to the 3-level framework of organizational culture proposed by Schein (2004) as shown in Fig. 1.