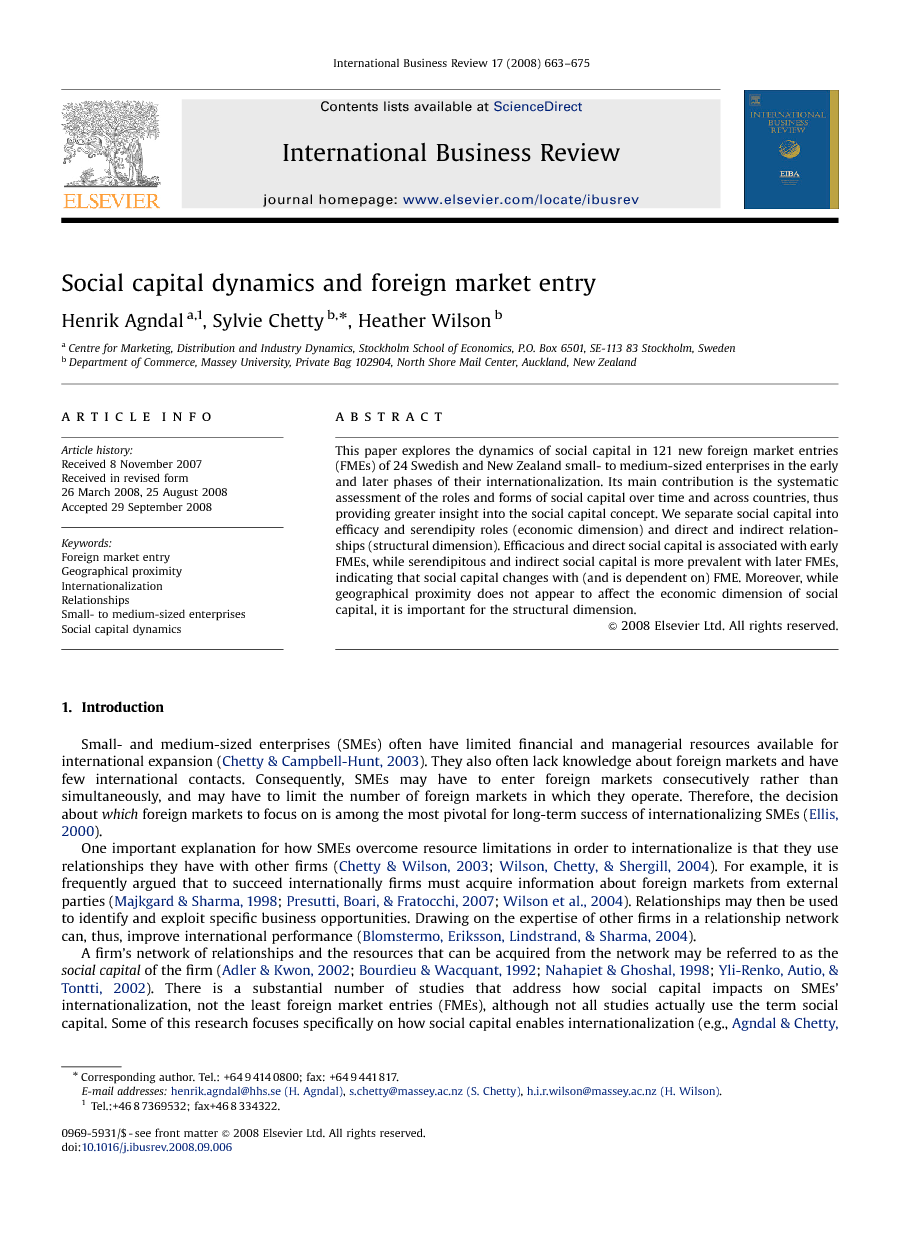 Small- and medium-sized enterprises (SMEs) often have limited financial and managerial resources available for international expansion (Chetty & Campbell-Hunt, 2003). They also often lack knowledge about foreign markets and have few international contacts. Consequently, SMEs may have to enter foreign markets consecutively rather than simultaneously, and may have to limit the number of foreign markets in which they operate. Therefore, the decision about which foreign markets to focus on is among the most pivotal for long-term success of internationalizing SMEs (Ellis, 2000). One important explanation for how SMEs overcome resource limitations in order to internationalize is that they use relationships they have with other firms (Chetty & Wilson, 2003; Wilson, Chetty, & Shergill, 2004). For example, it is frequently argued that to succeed internationally firms must acquire information about foreign markets from external parties (Majkgard & Sharma, 1998; Presutti, Boari, & Fratocchi, 2007; Wilson et al., 2004). Relationships may then be used to identify and exploit specific business opportunities. Drawing on the expertise of other firms in a relationship network can, thus, improve international performance (Blomstermo, Eriksson, Lindstrand, & Sharma, 2004). A firm's network of relationships and the resources that can be acquired from the network may be referred to as the social capital of the firm (Adler & Kwon, 2002; Bourdieu & Wacquant, 1992; Nahapiet & Ghoshal, 1998; Yli-Renko, Autio, & Tontti, 2002). There is a substantial number of studies that address how social capital impacts on SMEs’ internationalization, not the least foreign market entries (FMEs), although not all studies actually use the term social capital. Some of this research focuses specifically on how social capital enables internationalization (e.g., Agndal & Chetty, 2007), while other studies look at the importance of social capital relative to other factors in explaining FME (e.g., Andersen & Buvik, 2002; Ellis, 2000; Ellis & Pecotich, 2001). Arguably, social capital is dynamic as it may increase as well as decrease over time. This happens as firms deepen existing relationships, establish new ones and terminate problematic ones (Rauch, 2001). For the internationalizing SME, this means that the social capital available when doing business only domestically is likely to be different from the social capital available when the firm has extensive international sales (Chetty & Wilson, 2003). While the dynamic nature of social capital is often implied in internationalization research, it should be highlighted that few studies explicitly consider how the social capital of the firm changes during the internationalization process (cf. Coviello, 2006). Consequently, there is a dearth of research on the dynamic interplay between social capital and international growth (Yli-Renko et al., 2002). Social capital can both affect and be affected by FMEs, depending on when it is employed in the firm's internationalization process. To our knowledge, few—if any—studies approach social capital and international expansion in this way. Our aim is to address this gap. More precisely, the purpose is to study the dynamic influence of social capital on SMEs’ FME at different points in the internationalization process. In addition, we extend our exploration of social capital dynamics by comparing Sweden and New Zealand, two small export-dependent countries with quite different spatial implications in terms of multinational investment and access to markets. The remainder of this article is divided into six main sections. The next section reviews the literature on social capital and SME internationalization and develops five propositions. Here we contribute to the literature by combining theory of social capital, its dynamics, roles and forms, with the FME literature into one framework. The propositions are summarized in a theoretical model. To test the robustness of this framework, we undertake a systematic process of case study analysis and coding, as well as conducting exploratory statistical analysis on the sample comprising our study. This is described in the subsequent sections focusing on method of research and presentation of results. The major themes emerging from our data are further illustrated by exemplar case studies of FMEs. The final part of the article contains discussion, conclusions, implications and limitations of the study.