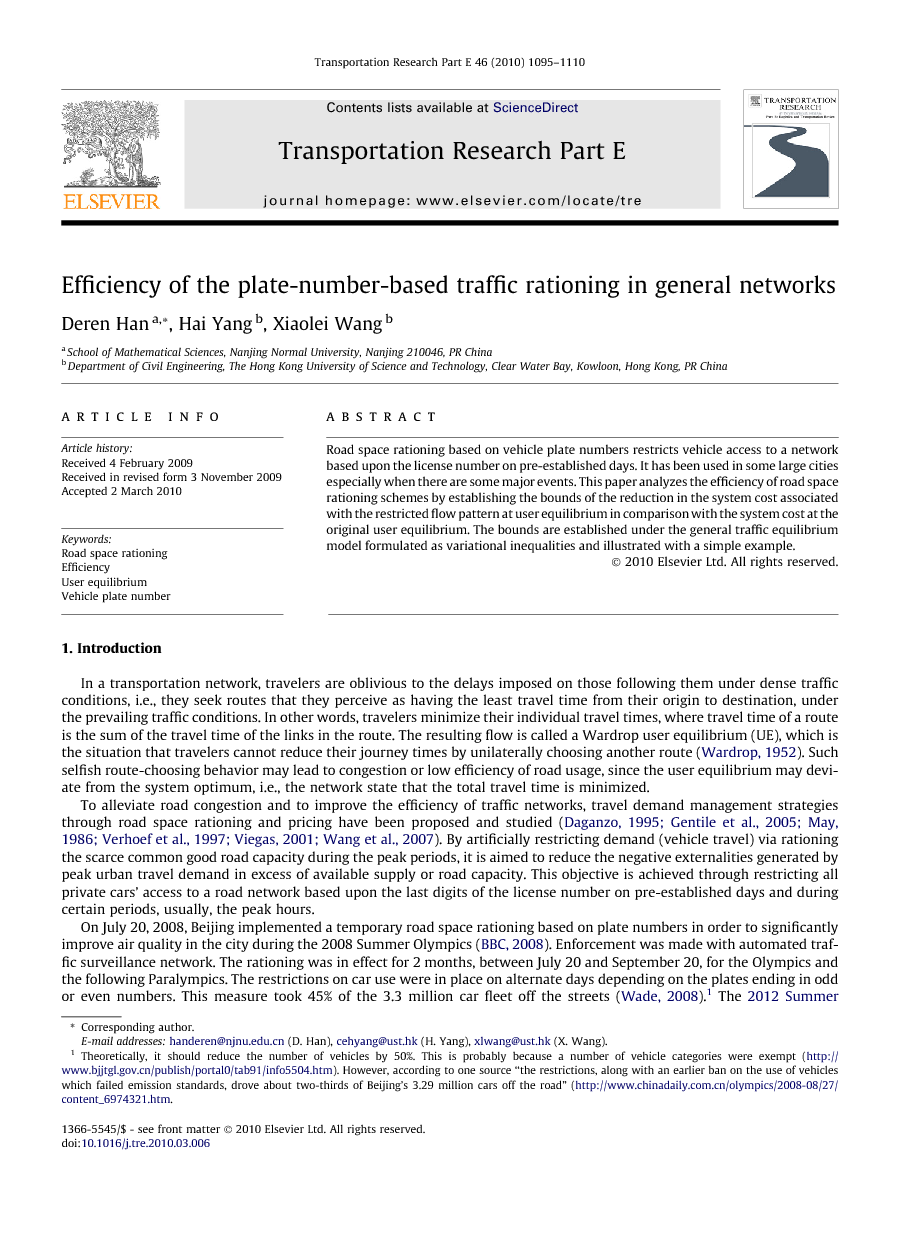 Road space rationing based on vehicle plate numbers restricts vehicle access to a network based upon the license number on pre-established days. It has been used in some large cities especially when there are some major events. This paper analyzes the efficiency of road space rationing schemes by establishing the bounds of the reduction in the system cost associated with the restricted flow pattern at user equilibrium in comparison with the system cost at the original user equilibrium. The bounds are established under the general traffic equilibrium model formulated as variational inequalities and illustrated with a simple example

In a transportation network, travelers are oblivious to the delays imposed on those following them under dense traffic conditions, i.e., they seek routes that they perceive as having the least travel time from their origin to destination, under the prevailing traffic conditions. In other words, travelers minimize their individual travel times, where travel time of a route is the sum of the travel time of the links in the route. The resulting flow is called a Wardrop user equilibrium (UE), which is the situation that travelers cannot reduce their journey times by unilaterally choosing another route (Wardrop, 1952). Such selfish route-choosing behavior may lead to congestion or low efficiency of road usage, since the user equilibrium may deviate from the system optimum, i.e., the network state that the total travel time is minimized. To alleviate road congestion and to improve the efficiency of traffic networks, travel demand management strategies through road space rationing and pricing have been proposed and studied (Daganzo, 1995, Gentile et al., 2005, May, 1986, Verhoef et al., 1997, Viegas, 2001 and Wang et al., 2007). By artificially restricting demand (vehicle travel) via rationing the scarce common good road capacity during the peak periods, it is aimed to reduce the negative externalities generated by peak urban travel demand in excess of available supply or road capacity. This objective is achieved through restricting all private cars’ access to a road network based upon the last digits of the license number on pre-established days and during certain periods, usually, the peak hours. On July 20, 2008, Beijing implemented a temporary road space rationing based on plate numbers in order to significantly improve air quality in the city during the 2008 Summer Olympics (BBC, 2008). Enforcement was made with automated traffic surveillance network. The rationing was in effect for 2 months, between July 20 and September 20, for the Olympics and the following Paralympics. The restrictions on car use were in place on alternate days depending on the plates ending in odd or even numbers. This measure took 45% of the 3.3 million car fleet off the streets (Wade, 2008).1 The 2012 Summer Olympics organization, with support from the Mayor of London office, announced in 2007 that they are planning auto exclusion zones around all venues, including London, Birmingham, Manchester, Newcastle upon Tyne, Glasgow and Cardiff (Mayor of London official website). London authorities hope this measure will work as an experiment to change the public’s travel behavior, allowing thereafter a shift from automobile to mass transit or bicycling. This severe policy has been publicized as the “First Car-free Olympics”. Long term implementation of road space rationing is common in Latin America, and in many cases, the road rationing has as a main goal the reduction of air pollution, such as the cases of Mexico City, and Santiago, Chile. SView the MathML sourcea¨o Paulo, with a fleet of 6 million vehicles in 2007, is the largest metropolis in the world with such a travel restriction, implemented first in 1996 as a measure to mitigate air pollution, and thereafter made permanent in 1997 to relieve traffic congestion. More recent implementations in Costa Rica and Honduras have had the objective of reducing oil consumption, due to the high impact this import has on the economy of small countries, and considering the steep increases in oil prices that began in 2003. In this paper, we analyze the efficiency of road space rationing via bounding the ratio between the system cost under the new user equilibrium for given traffic demand with road space rationing and that under the original user equilibrium. There are some recent literature on efficiency analysis of the toll-based traffic management, which bounded the price of anarchy, i.e., the ratio between the system cost at UE and the minimum system cost (Chau and Sim, 2003; Cole et al., 2003a and Cole et al., 2003b; Correa et al., 2004 and Czumaj and Vöcking, 2002;Han et al., in press, Han et al., 2008a and Han et al., 2008b; Han and Yang, 2008, Koutsoupias and Papadimitriou, 1999, Roughgarden and Tardos, 2002 and Roughgarden, 2002). To our best knowledge, this paper is the first trial in bounding the efficiency of the plate-number-based traffic rationing. The paper is organized as follows. In the next section, we introduce some basic definitions and describe the traffic equilibrium model under consideration. In Section 3, we establish a general lower and upper bound of the system cost associated with the rationed traffic equilibrium, which depends on solutions of semi-infinite semidefinite programming problems. In Section 4, we provide concrete bounds for some special cases. In particular, when the Jacobian matrix of link cost functions is positive definite, we show that the efficiency bound can be obtained via explicitly solving a nonlinear program with two variables. We also investigate the simplified cases with asymmetric or symmetric linear link cost functions and the case with separable nonlinear link cost functions. A simple example is given in Section 5 to illustrate our results. Section 6 offers some concluding remarks.

The contribution of the paper to the literature is that we analyzed the efficiency of traffic regulation via demand control. For doing this, we proposed several lower bounds and upper bounds of the ratio between the system cost at the new user equilibrium with rationing and the original system cost at user equilibrium. A simple example is presented to show the tightness of the bounds. Our analysis is built on the assumption that the number of users subject to rationing is fixed, which is usually the case for short-term policy, e.g., the road space rationing via even/odd of the plate last digit number during the period of Beijing Olympic Games. From a long term point of view, the users usually act as policy adaptor, rather than policy taker, which means that some users, usually those with higher value of times, may buy more cars so as to drive everyday. For such a long term traffic equilibrium model with road space rationing and variable car ownership case, the efficiency should be developed in further studies. Note that here the efficiency of the plate-number-based traffic rationing is defined on an entire network. If the regulated area is only part of a network, the result in this paper cannot be directly applied to predict the efficiency bound. As in this case, the demand for this area or the demand for the entire network, will not be necessarily within the set K′ defined by (5). Only those trips which terminated at that area, originated from that area, within that area, or whose origin and destination are linked without alternative routes outside the area, will be strictly scaled down. Some other trips will probably use the routes through the area on free days, and the routes outside the area on restricted days, which makes the demand for the area not confined to the set K′. Another aspect of our model is that, our definition of efficiency only captures the congestion reduction effect of rationing. However, as implemented in many districts, rationing is also used to improve air quality. Such environmental effects can be considered to be roughly proportional to the congestion reductions, but more details have to be figured out. Last but not least, the efficiency bound studied here can also be used to forecast the congestion effect due to population growth or car ownership increase if their resulting demand variation is uniformly distributed among different OD pairs. The only difference is to allow β > 1.