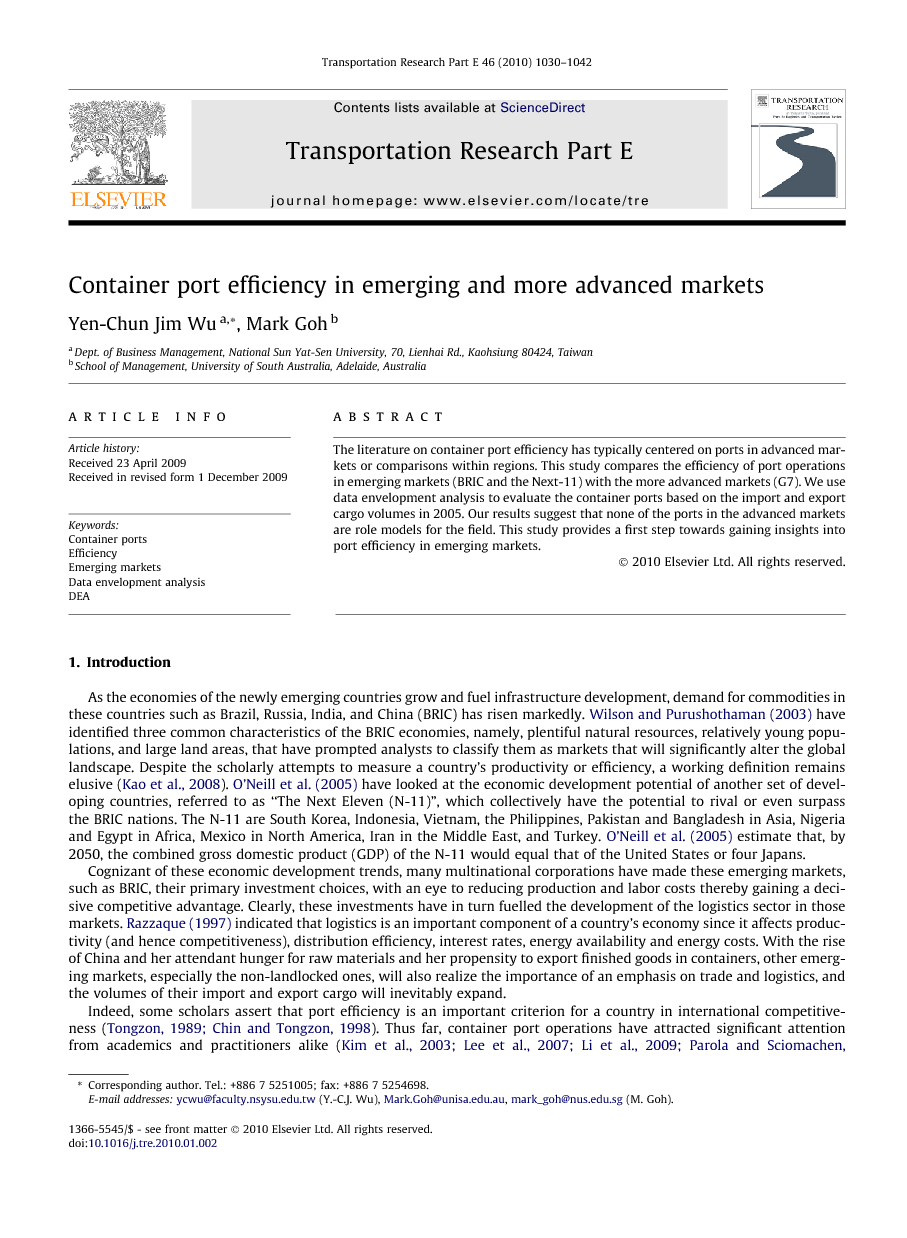 The literature on container port efficiency has typically centered on ports in advanced markets or comparisons within regions. This study compares the efficiency of port operations in emerging markets (BRIC and the Next-11) with the more advanced markets (G7). We use data envelopment analysis to evaluate the container ports based on the import and export cargo volumes in 2005. Our results suggest that none of the ports in the advanced markets are role models for the field. This study provides a first step towards gaining insights into port efficiency in emerging markets.

As the economies of the newly emerging countries grow and fuel infrastructure development, demand for commodities in these countries such as Brazil, Russia, India, and China (BRIC) has risen markedly. Wilson and Purushothaman (2003) have identified three common characteristics of the BRIC economies, namely, plentiful natural resources, relatively young populations, and large land areas, that have prompted analysts to classify them as markets that will significantly alter the global landscape. Despite the scholarly attempts to measure a country’s productivity or efficiency, a working definition remains elusive (Kao et al., 2008). O’Neill et al. (2005) have looked at the economic development potential of another set of developing countries, referred to as “The Next Eleven (N-11)”, which collectively have the potential to rival or even surpass the BRIC nations. The N-11 are South Korea, Indonesia, Vietnam, the Philippines, Pakistan and Bangladesh in Asia, Nigeria and Egypt in Africa, Mexico in North America, Iran in the Middle East, and Turkey. O’Neill et al. (2005) estimate that, by 2050, the combined gross domestic product (GDP) of the N-11 would equal that of the United States or four Japans. Cognizant of these economic development trends, many multinational corporations have made these emerging markets, such as BRIC, their primary investment choices, with an eye to reducing production and labor costs thereby gaining a decisive competitive advantage. Clearly, these investments have in turn fuelled the development of the logistics sector in those markets. Razzaque (1997) indicated that logistics is an important component of a country’s economy since it affects productivity (and hence competitiveness), distribution efficiency, interest rates, energy availability and energy costs. With the rise of China and her attendant hunger for raw materials and her propensity to export finished goods in containers, other emerging markets, especially the non-landlocked ones, will also realize the importance of an emphasis on trade and logistics, and the volumes of their import and export cargo will inevitably expand. Indeed, some scholars assert that port efficiency is an important criterion for a country in international competitiveness (Tongzon, 1989 and Chin and Tongzon, 1998). Thus far, container port operations have attracted significant attention from academics and practitioners alike (Kim et al., 2003, Lee et al., 2007, Li et al., 2009, Parola and Sciomachen, 2005 and Rodríguez-Álvarez et al., 2007). According to UNCTAD (2007), the global containership fleet increased by 17 million dead weight tons or 15.5% y-o-y, with the high growth rate reflecting greater international trade in manufactured goods and increasing containerization. For this reason, improving port efficiency or productivity has become a critical yet challenging task in the development of many countries (Turner et al., 2004). As ports are an important link in the logistics chain, the level of port efficiency affects to a large extent a country’s productivity and competitiveness. Countries need to focus on the factors that affect the efficiency of their ports and benchmark on the degree of efficiency, both between ports within a region and with the ports of other regions (González and Trujillo, 2008). However, few international studies have been conducted on the port industry in emerging markets either for the lack of data or interest. Hence, spawned by the recent economic growth of emerging markets such as those of India and China, exploring issues relevant to the port sector of such markets is of considerable importance, despite the dearth of literature. This research thus seeks to evaluate the efficiency of container ports in emerging and advanced markets. We first review and discuss the container port efficiency of the various countries of interest. Next, we apply the DEA technique to measure the efficiency of container ports. Lastly, the paper analyzes the results, and presents conclusions and some suggestions for the port sector.

This paper examines the efficiency of maritime port operations in emerging markets. Past studies have focused primarily on the operational efficiency of container ports in developed countries, on the top 30 container ports in the world, or comparing regional ports. The work on port operations in emerging markets is scant. Using the DEA-CCR, DEA-BCC, and A&P models to measure the efficiency of ports in developing countries, this study reports that the ports of Shanghai in China, Chittagong in Bangladesh, and Santos in Brazil had efficiency levels in 2005 that surpassed those in the developed G7 nations. This study used efficiency values obtained through “self-assessment” and “peer assessment” techniques to broadly analyze port operations around the world. It divided the ports studied into three separate categories. Bangladesh, China and Brazil in Group 1 had the ports with the highest “self-assessment” and “peer assessment” efficiency values, and these ports serve as benchmarks for the sector. This study’s results could be used by port operators as a reference when developing their facilities and improving operational performance. Bangladesh and China, though both belong to Group 1 as models of efficiency, have different container throughputs. Bangladesh’s container volume was 783,353 TEU while China’s was 18.08 million TEU in 2005. Despite such stark differences between the two countries in terms of inputs and outputs, both were highly efficient. This suggests that regardless of the volume of inputs and outputs, any port that plans its facilities based on the actual cargo demand can achieve outstanding operational efficiency. Also, no advanced country had a port ranked in Group 1, and only the port of Tokyo, Japan made it to Group 2. The ports of the other G7 countries studied were in the least efficient Group 3. This suggests that while the ports of the emerging countries may not have the same level of equipment than those in advanced countries, they nevertheless are more competitive than their more advanced counterparts on operational efficiency. This contradicts the result of Bookbinder and Tan (2003) who compared the logistics systems in Europe and Asia, and reported that, other than the two advanced countries (the UK and France) that were classified in the second tier, the other advanced European countries were all ranked in the top tier, while most of the countries in the lowest tier were emerging countries. One explanation for this contradiction could be that, over time, developing countries have caught up on the efficiency of their marine transport services. Ports (except those in China, Brazil and Bangladesh) need to upgrade their facilities and capacity urgently or risk suffering from the severe bottlenecks as trade volume expands. Policy makers should also consider improving the port catchment area as Dowd and Leschine (1990) have argued that the productivity of container ports and distribution stations depends on their land, equipment, and how efficiently workers are deployed. For example, India’s biggest infrastructural deficiency is its lack of electricity, due to the high levels of economic growth leading to an inordinate increase in electricity demand which have far outpaced the speed at which new power plants can be built. Also, its ports suffer from a lack of connectivity to major highways and industrial clusters, and that its inland transportation network is inefficient and slow because of the soaring costs of fuel (Chandrasekaran and Kumar, 2004). If such ports can rapidly improve their links to external transportation networks, have better integrated service provision, and improve in-port railroad transportation services, they will be able to achieve better operational efficiency (Kaisar et al., 2006). Likewise, based on the port of Chittagong in Bangladesh and through the use of in-depth interviews and Delphi techniques, Islam et al. (2006) highlighted that the lesser-developed economies can develop faster if only their inland freight transport systems support multimodal transport. In short, more efficient customs clearance, a shift in freight transport, technology & systems, and modern logistics concepts and practices must be implemented and constantly improved upon. Aside from the factors of port services, local inland conditions, availability, convenience, logistics costs, and regional centers and connectivity, research have identified other factors that influence the choice of shipping companies and owners with regard to ports. These include the size and level of activity of the free trade zones, the efficiency of the inland transportation network, inland transportation costs, the rate of physical inspection, customs clearance, and export and import lead times (Arvis et al., 2007 and Yeo et al., 2008). All these factors that can strengthen the efficiency and hence port productivity are strategic options for port operators to carefully consider when pondering on improvements to their facilities. 5.1. Limitations and future research As in any research, our study has its limitations. According to Liu (2008), the nature of the DEA-CCR and DEA-BBC models overlook environmental factors, managerial inefficiency, and statistical noise. Further study is needed to see if the proposed revised models may enhance the practicality of DEA. We recognize that numerous other non-tangible factors affect container port efficiency. This study has adopted a focus on land and equipment as variables primarily because of a lack of data on worker efficiency. If better data were available, container port efficiency could be more thoroughly explored and detailed.