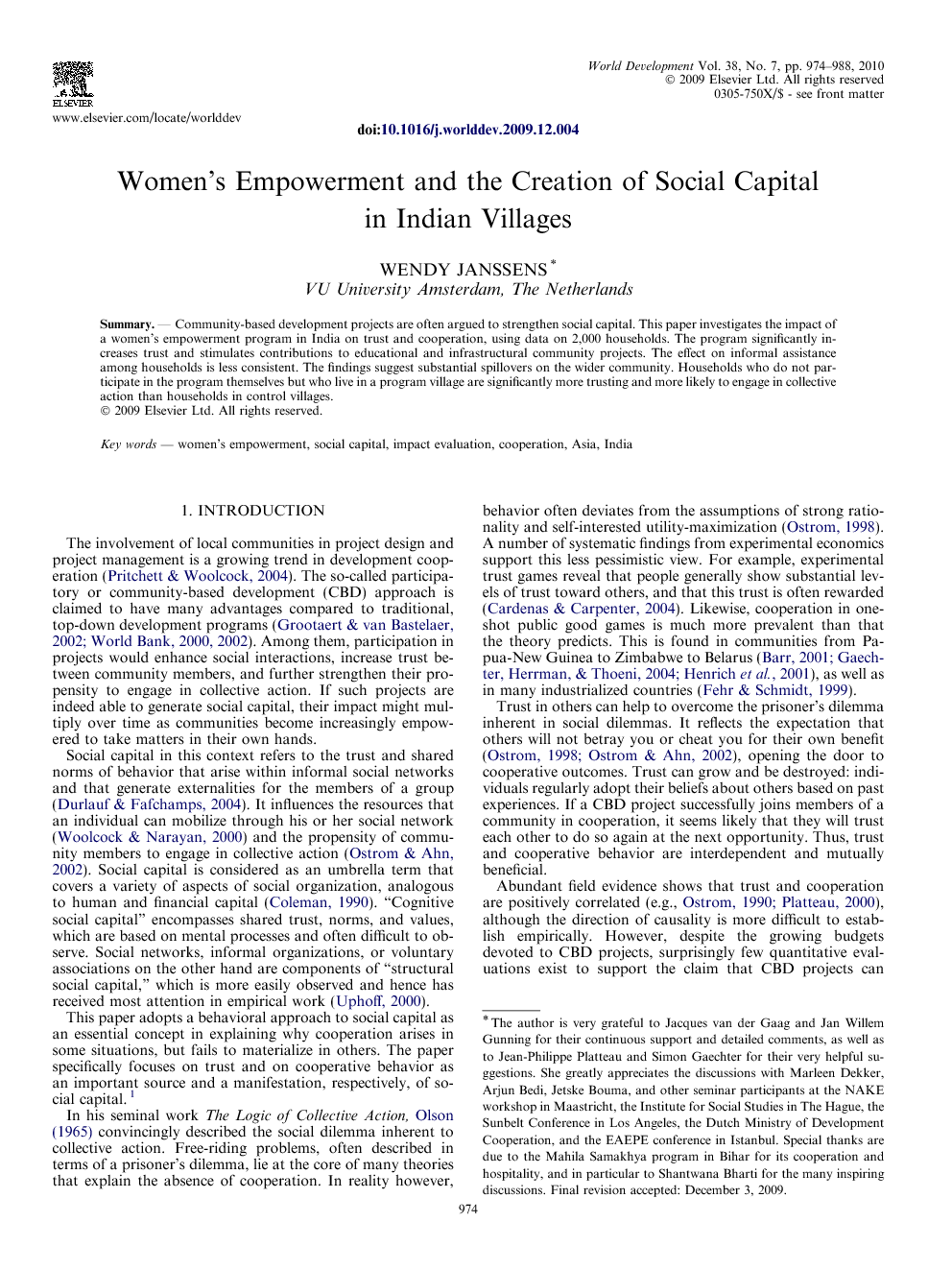 Community-based development projects are often argued to strengthen social capital. This paper investigates the impact of a women’s empowerment program in India on trust and cooperation, using data on 2,000 households. The program significantly increases trust and stimulates contributions to educational and infrastructural community projects. The effect on informal assistance among households is less consistent. The findings suggest substantial spillovers on the wider community. Households who do not participate in the program themselves but who live in a program village are significantly more trusting and more likely to engage in collective action than households in control villages.

Channels of development aid are increasingly shifting from the traditional top-down mechanisms to community-based development projects that actively involve communities in the design or the management of the project. This approach is claimed to increase social capital, in terms of trust and collective action. However, quantitative evidence to support this claim is still very limited. Based on a unique large-scale, quasi-experimental dataset, this paper examines the impact of the Mahila Samakhya program in Bihar on social capital. Bihar is one of the poorest states of India where women, the lower castes, and the landless still face substantial oppression. Through a gradual process of trust-building, Mahila Samakhya aims to empower the most disadvantaged women and to enable them to shape their own life through joint action across caste and religious boundaries. We find that Mahila Samakhya has resulted in significant increases in trust in community members and in strangers. In addition, contributions to community projects such as the construction or maintenance of schools, roads, and bridges are significantly larger in program villages than in control villages. The impact of the program is especially large among its target group: the lower castes and the poorest and least educated households. In addition, the program is able to partly offset community characteristics that inhibit collective action. We find only limited evidence that the program increases social assistance among households. This may be due to a lack of precision in the measurement of assistance that captures changes in types but not in intensity, frequency, or recipients of assistance. Further evidence suggests that the effects on social capital are especially correlated with enhanced agency and empowerment of women in Mahila Samakhya villages. A comparison of the control group with the households who live in program villages but who do not participate in the program themselves is suggestive of substantial spillover effects on the broader community, in particular regarding trust in community members and contributions to community projects. These findings should be interpreted with some caution as we cannot fully control for potential selection bias. Nevertheless, they suggest that the impact of community-based development projects on social capital trickles down to other, non-participating community members. Thus, the spin-offs of the program may set in motion a true movement of change. The study has not empirically investigated whether trust “causes” cooperation, whether trust itself might be a result of cooperative behavior, or both; or whether other aspects such as enhanced social interactions play a role. The potential multiplier effect of CBD projects is to a large extent based on the assumption that trust and cooperation are mutually reinforcing. If on the other hand causality runs only in one direction, this has implications for longer term effectiveness as well as project design. The project should focus on the “engine” of cooperation and either emphasize the building of trust, or instead increase awareness on the benefits of collective action and provide additional resources for cooperation. Further research is necessary to understand underlying dynamics and disentangle directions of causality. Also, it is not straightforward to what extent the results can be extended to other programs. Mahila Samakhya is rather unique in its careful but slow approach that puts a lot of effort in building trust and confidence among the women before it goes on to any other activity. Many community-based development projects instead start with the mobilization of individuals to join in collective action, perhaps after a few weeks of participatory meetings, based on an approach of learning-by-doing. Our results cannot predict whether such an approach is able to produce similar outcomes. Platteau and Abraham (2002) argue that rapid disbursement procedures for CBD projects are likely to be unsuccessful, if not counterproductive. Building social capital, empowering minorities, and breaking down existing social inequalities take time and intensive facilitator efforts. Hence, a comparative study of the impact of different program designs would be necessary to further gain insights in the characteristics of projects that make them successful in increasing social capital. Moreover, the women’s groups operate at their own pace and take up new activities at their own demand. This prevents the program from rapidly coming to scale. Funders of the program are neither fully in control of financial disbursements nor of project outcomes. Obviously, this asks for a great patience on their part as well as a considerable devolution of control to local communities. It is to be seen whether this is compatible with the internal incentive and reward mechanisms of multilateral and other donors.