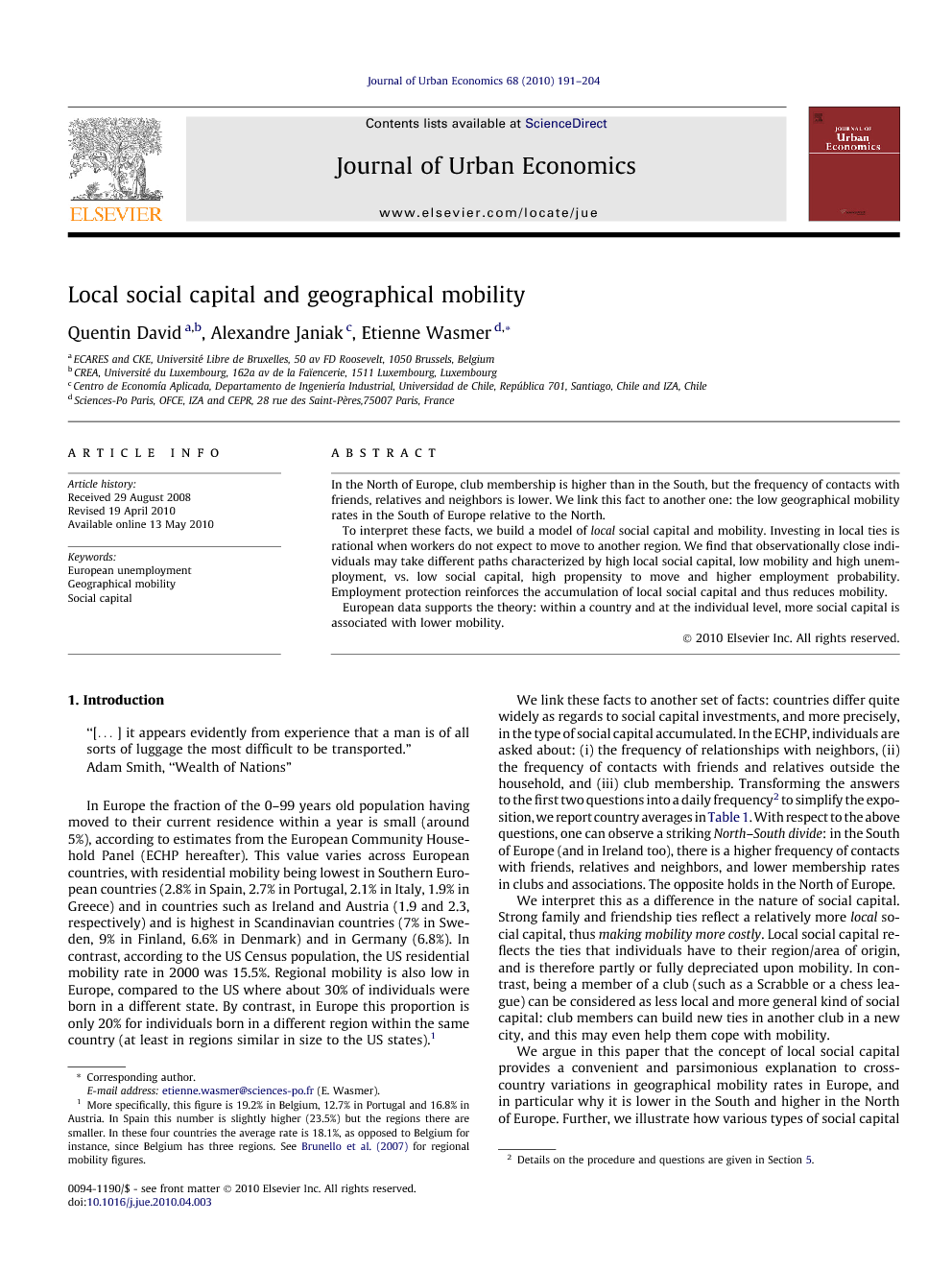 In the North of Europe, club membership is higher than in the South, but the frequency of contacts with friends, relatives and neighbors is lower. We link this fact to another one: the low geographical mobility rates in the South of Europe relative to the North. To interpret these facts, we build a model of local social capital and mobility. Investing in local ties is rational when workers do not expect to move to another region. We find that observationally close individuals may take different paths characterized by high local social capital, low mobility and high unemployment, vs. low social capital, high propensity to move and higher employment probability. Employment protection reinforces the accumulation of local social capital and thus reduces mobility. European data supports the theory: within a country and at the individual level, more social capital is associated with lower mobility.

“[… ] it appears evidently from experience that a man is of all sorts of luggage the most difficult to be transported.” Adam Smith, “Wealth of Nations” In Europe the fraction of the 0–99 years old population having moved to their current residence within a year is small (around 5%), according to estimates from the European Community Household Panel (ECHP hereafter). This value varies across European countries, with residential mobility being lowest in Southern European countries (2.8% in Spain, 2.7% in Portugal, 2.1% in Italy, 1.9% in Greece) and in countries such as Ireland and Austria (1.9 and 2.3, respectively) and is highest in Scandinavian countries (7% in Sweden, 9% in Finland, 6.6% in Denmark) and in Germany (6.8%). In contrast, according to the US Census population, the US residential mobility rate in 2000 was 15.5%. Regional mobility is also low in Europe, compared to the US where about 30% of individuals were born in a different state. By contrast, in Europe this proportion is only 20% for individuals born in a different region within the same country (at least in regions similar in size to the US states).1 We link these facts to another set of facts: countries differ quite widely as regards to social capital investments, and more precisely, in the type of social capital accumulated. In the ECHP, individuals are asked about: (i) the frequency of relationships with neighbors, (ii) the frequency of contacts with friends and relatives outside the household, and (iii) club membership. Transforming the answers to the first two questions into a daily frequency2 to simplify the exposition, we report country averages in Table 1. With respect to the above questions, one can observe a striking North–South divide: in the South of Europe (and in Ireland too), there is a higher frequency of contacts with friends, relatives and neighbors, and lower membership rates in clubs and associations. The opposite holds in the North of Europe.We interpret this as a difference in the nature of social capital. Strong family and friendship ties reflect a relatively more local social capital, thus making mobility more costly. Local social capital reflects the ties that individuals have to their region/area of origin, and is therefore partly or fully depreciated upon mobility. In contrast, being a member of a club (such as a Scrabble or a chess league) can be considered as less local and more general kind of social capital: club members can build new ties in another club in a new city, and this may even help them cope with mobility. We argue in this paper that the concept of local social capital provides a convenient and parsimonious explanation to cross-country variations in geographical mobility rates in Europe, and in particular why it is lower in the South and higher in the North of Europe. Further, we illustrate how various types of social capital have different impacts on mobility and unemployment rates. The reciprocal is also true, since the anticipation of mobility affects social capital investments, as mentioned in Glaeser et al. (2002). If individuals perceive themselves as being strongly attached to a village, a township or a region, they will invest in local social capital, because the returns from these local ties are high. Understanding the determinants of geographical mobility matters as it reflects economies’ ability to cope with change and to reallocate production factors to where they will be more efficient, and ultimately to raise the aggregate employment rate. In particular, an influential work by Bertola and Ichino (1995) documented the inability of European workers to move to more dynamic regions. According to these authors, this occurs because of wage and income compression, thus lowering the returns from mobility. Low mobility and wage compressing labor market institutions have indeed been central in many explanations of unemployment in Europe (see Layard et al., 1991 and Layard and Nickell, 1999), since residential mobility widely differs across countries. In this paper we enrich these theories using the concept of local social capital. In Section 2, we first review the literature on social capital and emphasize its implicit or explicit geographical dimensions. In Section 3 we develop a simple partial equilibrium job search model with geographical mobility decisions, given the level of social capital. We show that more social capital always reduces mobility with ambiguous effects on unemployment: social capital increases unemployment only if it depreciates more after geographical mobility than after job loss. In Section 4, we explore the determinants of social capital. We find that ex ante observationally close individuals may behave very differently: some will not invest a great deal in local social capital and will thus be more mobile and better employed, while others will invest more in local social capital, remain immobile and unemployed, but enjoy the returns to their social capital. In Section 5, we match theory and the data by providing a panel analysis based on the ECHP. Using probit, IV and fixed effects, we establish a few stable relations within the data, notably: (1) Individuals endowed with more local social capital as described by the variables “Friends/relatives”, “Neighbors” or “Club” are less likely to move to another region. (2) Individuals endowed with more local social capital such as that described by the variables “Friends” or “Neighbors” are more likely to become unemployed. (3) By contrast, individuals who are members of a club are less likely to become unemployed. (4) In all three dimensions measured, workers in a region not that of their birth have less social capital (“Friends”, “Neighbors/relatives” and “Club”). In the conclusion, we further explore the explanatory power of social capital on aggregate unemployment, and conclude that more work on this issue is needed, given the concept’s potential. Finally we argue that, as a result of these two self-reinforcing causalities and this externality, local social capital is a binding factor: even in the presence of strong economic incentives to migrate, such as regional unemployment differentials, individuals may prefer to live on welfare and enjoy local social capital.

In this paper, we discuss the fact that low mobility is the outcome of self-reinforcing factors: investments in local social capital are induced by low mobility and in turn they become a factor of immobility. We exhibit several examples of complementarity between high local social capital and low mobility rate. Data analysis supports the theory. Local social capital has unambiguous negative effects on individual geographical mobility, while it increases individual unemployment probabilities. The magnitude of the effects is quite striking. The implications of this paper on the unemployment debate can be summarized as follows. Unemployment in Europe is usually thought to be the result of various market imperfections (unemployment compensation, employment protection, good market imperfections; wage compression), with all variables negatively affecting mobility as well.26 Our paper shows that in the literature mentioned above, the factors causing unemployment are the same as those leading to accumulation of local social capital. Our theory indicates that local social capital is complementary to other explanations of high European unemployment and this has consequences regarding its persistence. Local social capital may indeed act as a bottleneck, preventing mobility. Attempts to handle unemployment by changing labor market institutions may fail given vicious circle involving immobility and high local social capital. Deregulating labor markets may simply increase inequality, but will not necessarily increase mobility a great deal. An efficient reform of the labor markets should instead combine traditional reforms and develop incentives to increase mobility, through social channels: the example of the Rotary Club given in introduction is an interesting policy that local authorities could use to attract migrants from other regions. In conclusion, we would like to suggest that differences in unemployment across European countries are related to intra-European differences in attitudes towards social capital. David et al. (2008b) report country-level regressions inspired by Layard and Nickell (1999). More particularly, they show that at the country level the log of unemployment is strongly and positively linked to social capital. We leave this for future work and simply conclude that social capital is an interesting avenue to explore.