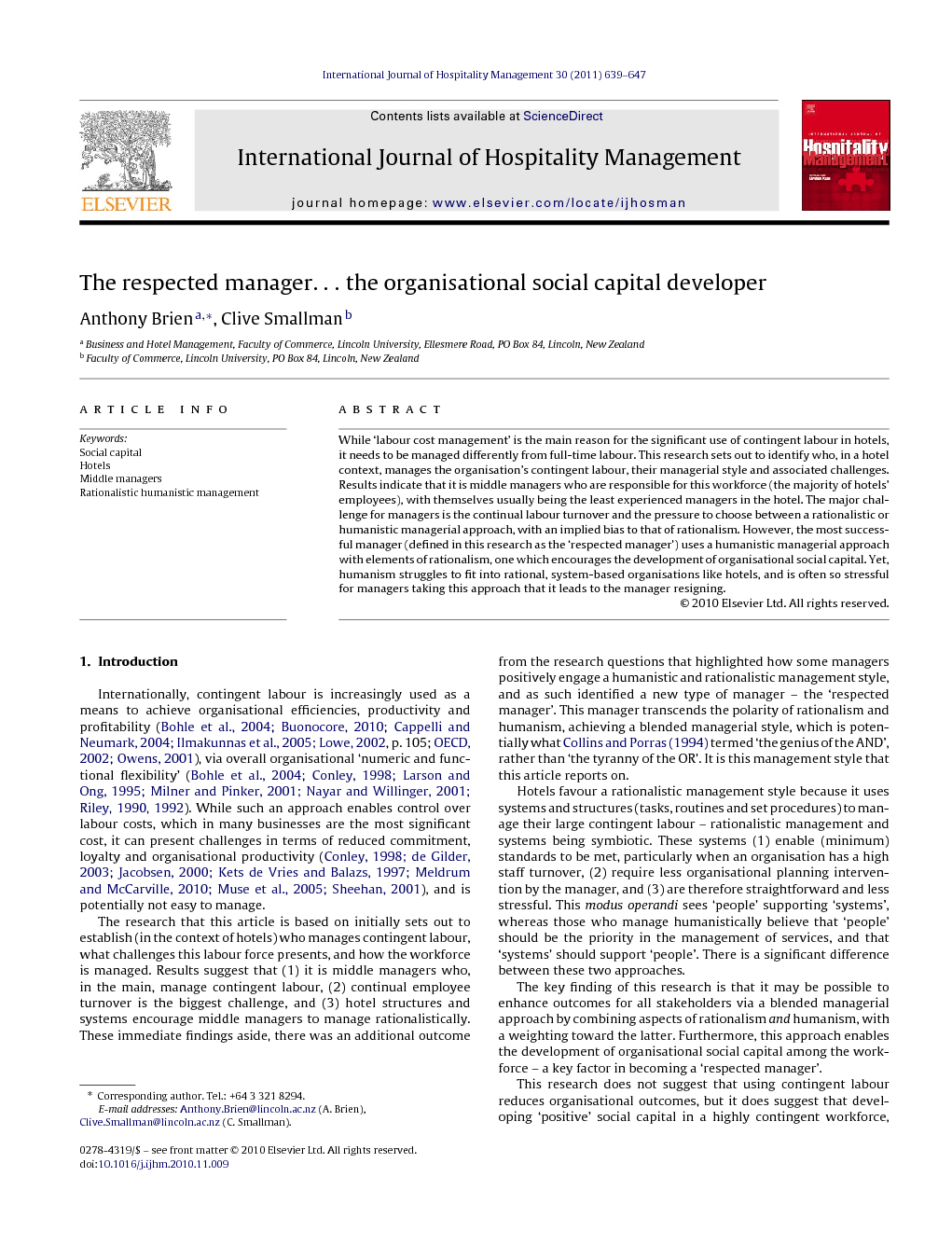 While ‘labour cost management’ is the main reason for the significant use of contingent labour in hotels, it needs to be managed differently from full-time labour. This research sets out to identify who, in a hotel context, manages the organisation's contingent labour, their managerial style and associated challenges. Results indicate that it is middle managers who are responsible for this workforce (the majority of hotels’ employees), with themselves usually being the least experienced managers in the hotel. The major challenge for managers is the continual labour turnover and the pressure to choose between a rationalistic or humanistic managerial approach, with an implied bias to that of rationalism. However, the most successful manager (defined in this research as the ‘respected manager’) uses a humanistic managerial approach with elements of rationalism, one which encourages the development of organisational social capital. Yet, humanism struggles to fit into rational, system-based organisations like hotels, and is often so stressful for managers taking this approach that it leads to the manager resigning.

Internationally, contingent labour is increasingly used as a means to achieve organisational efficiencies, productivity and profitability (Bohle et al., 2004, Buonocore, 2010, Cappelli and Neumark, 2004, Ilmakunnas et al., 2005 and Lowe, 2002, p. 105; OECD, 2002 and Owens, 2001), via overall organisational ‘numeric and functional flexibility’ (Bohle et al., 2004, Conley, 1998, Larson and Ong, 1995, Milner and Pinker, 2001, Nayar and Willinger, 2001, Riley, 1990 and Riley, 1992). While such an approach enables control over labour costs, which in many businesses are the most significant cost, it can present challenges in terms of reduced commitment, loyalty and organisational productivity (Conley, 1998, de Gilder, 2003, Jacobsen, 2000, Kets de Vries and Balazs, 1997, Meldrum and McCarville, 2010, Muse et al., 2005 and Sheehan, 2001), and is potentially not easy to manage. The research that this article is based on initially sets out to establish (in the context of hotels) who manages contingent labour, what challenges this labour force presents, and how the workforce is managed. Results suggest that (1) it is middle managers who, in the main, manage contingent labour, (2) continual employee turnover is the biggest challenge, and (3) hotel structures and systems encourage middle managers to manage rationalistically. These immediate findings aside, there was an additional outcome from the research questions that highlighted how some managers positively engage a humanistic and rationalistic management style, and as such identified a new type of manager – the ‘respected manager’. This manager transcends the polarity of rationalism and humanism, achieving a blended managerial style, which is potentially what Collins and Porras (1994) termed ‘the genius of the AND’, rather than ‘the tyranny of the OR’. It is this management style that this article reports on. Hotels favour a rationalistic management style because it uses systems and structures (tasks, routines and set procedures) to manage their large contingent labour – rationalistic management and systems being symbiotic. These systems (1) enable (minimum) standards to be met, particularly when an organisation has a high staff turnover, (2) require less organisational planning intervention by the manager, and (3) are therefore straightforward and less stressful. This modus operandi sees ‘people’ supporting ‘systems’, whereas those who manage humanistically believe that ‘people’ should be the priority in the management of services, and that ‘systems’ should support ‘people’. There is a significant difference between these two approaches. The key finding of this research is that it may be possible to enhance outcomes for all stakeholders via a blended managerial approach by combining aspects of rationalism and humanism, with a weighting toward the latter. Furthermore, this approach enables the development of organisational social capital among the workforce – a key factor in becoming a ‘respected manager’. This research does not suggest that using contingent labour reduces organisational outcomes, but it does suggest that developing ‘positive’ social capital in a highly contingent workforce, and arguably any workforce construction, enhances outcomes. It is important, however, to acknowledge that developing social capital is complex, time consuming, and potentially stressful for those embarking on such a path (Buick and Thomas, 2001). Research also acknowledges that, on occasions, ‘negative’ social capital may eventuate (from negative modus operandi), given an organisation's mixture of sub-social groupings who, for a number of reasons, feel or are disengaged from the group as a whole, and whose close ties accentuate poor practices (Takahashi and Megalong, 2008). Finally, and holistically, this article sets out to engender discussion around the concept of organisational social capital in the workplace, particularly when working with contingent labour in the service industry. The literature review that follows considers contingent labour and the paradigm of rationalism and humanism before exploring the area of organisational social capital. The research methodology is then explained followed by findings, discussion and implications for the hotel and service industries.

As is normal in any grounded qualitative research, research questions have been used in this study to stimulate the development of grounded theory, which, by its fundamental nature, moves away from directly answering the questions. Instead, a series of themes relating to the management of contingent labour in hotels were offered and discussed. In order to complete the evaluation of this important subject, the original questions need to be re-visited. In addressing the first research question – “Who are the main managers of contingent labour?” – GM's, HRM's and supervisory managers agree that this is generally the middle managers; that is, managers and supervisors of departmental areas. Such managers usually achieve this position after firstly being part of the contingent labour pool themselves, before securing full-time employment status. Achieving supervisory or managerial positions can happen quickly, as they are the survivors of the high turnover that exists within hotels (Cheng and Brown, 1998). While this may be a positive opportunity for the individual, the contingent labour pool (the largest workforce in most hotels) is being managed by the least experienced managers. The second research question – “what challenges do contingent labour present?” – highlights the major issue of workforce turnover and the personal managerial style conflict between rationalism (what some managers termed ‘getting on with the job’) and humanism (building relationships). While (high) employee turnover in the hotel sector is not uncommon (Kacmar et al., 2006, Lashley, 2002, Simons and Hinkin, 2001, Steele and Ovalle, 1984 and Wasmuth and Davis, 1983), it is understandably a challenge for these often less experienced managers who have yet to develop people management skills and an appropriate management style. As a means of managing high employee turnover (the most significant managerial challenge), managers commented on being encouraged to adopt a managerial style that is efficient, effective and economical, that meets the organisation's objectives while attempting to reduce managerial stress – potentially the managerial genre of rationalism. In reality, however, this managerial style presents several conflicting and confusing sub-themes: (1) That ‘rationalism and systems’ can be anti-humanistic, a style that participants felt was beneficial in managing contingent labour; (2) That while the use of systems ensures achievement of minimal standards, it does not necessarily encourage performance beyond this point; (3) That hotels need to develop and support managers to build organisational social capital (humanism), as this was seen as an approach to retain a competitive advantage; and (4) That the hotel industry is perceived negatively, as noted by the participants in this research and as supported by literature (Costa et al., 1997, Kusluvan and Kusluvan, 2000, Manning et al., 2005 and Washington et al., 2003). This translates to high turnover, making the development of social capital difficult. The sub-theme of ‘an industry negatively perceived’ has been extensively reported by Ellis (1981), Breiter (1991), Bonn and Forbringer (1992), Baaron and Maxwell (1993), and Brien (2003), and demonstrates that hotels have not addressed this issue. The final research question – “How is contingent labour managed?” – was partly addressed in the second question (the challenges), and is addressed by participants who felt that they were being forced to choose between a rationalistic and a humanistic modus operandi. However, from observing other managers, a key research finding is that many practicing managers identified a new managerial style – the ‘respected manager’. This is a manager who uses a blended rationalistic/humanistic managerial approach that achieves the goals of both the hotel and the employee. While such a managerial style may not be totally new, the participating managers felt that it is important to highlight this observation. It is an approach not unlike what Collins and Porras (1994) describe as ‘the genius of the AND’; that is, it is not one style OR the other, but a mixture of both – the AND. What is new is how critical this management style is when managing contingent labour in the service industry.