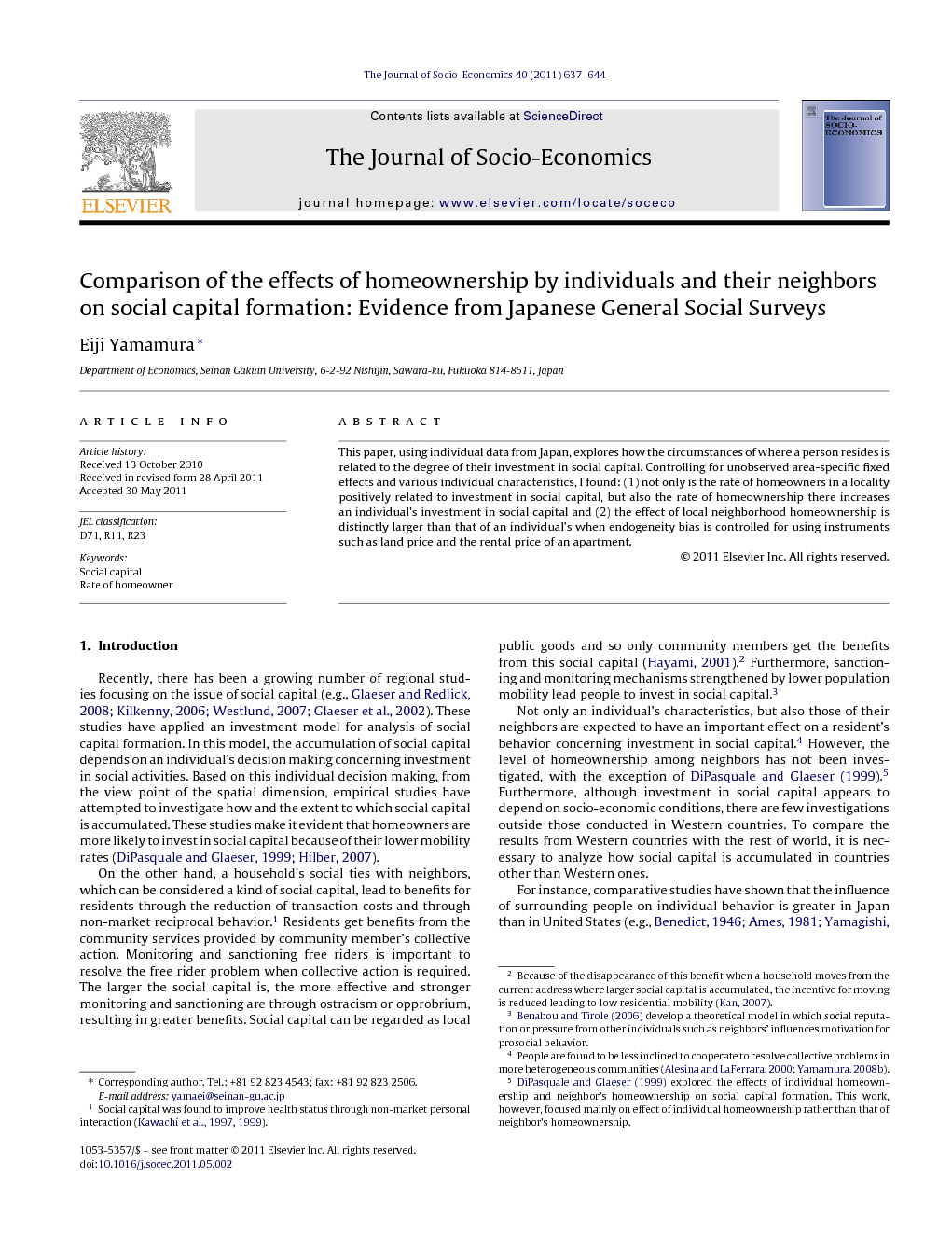 Recently, there has been a growing number of regional studies focusing on the issue of social capital (e.g., Glaeser and Redlick, 2008, Kilkenny, 2006, Westlund, 2007 and Glaeser et al., 2002). These studies have applied an investment model for analysis of social capital formation. In this model, the accumulation of social capital depends on an individual's decision making concerning investment in social activities. Based on this individual decision making, from the view point of the spatial dimension, empirical studies have attempted to investigate how and the extent to which social capital is accumulated. These studies make it evident that homeowners are more likely to invest in social capital because of their lower mobility rates (DiPasquale and Glaeser, 1999 and Hilber, 2007). On the other hand, a household's social ties with neighbors, which can be considered a kind of social capital, lead to benefits for residents through the reduction of transaction costs and through non-market reciprocal behavior.1 Residents get benefits from the community services provided by community member's collective action. Monitoring and sanctioning free riders is important to resolve the free rider problem when collective action is required. The larger the social capital is, the more effective and stronger monitoring and sanctioning are through ostracism or opprobrium, resulting in greater benefits. Social capital can be regarded as local public goods and so only community members get the benefits from this social capital (Hayami, 2001).2 Furthermore, sanctioning and monitoring mechanisms strengthened by lower population mobility lead people to invest in social capital.3 Not only an individual's characteristics, but also those of their neighbors are expected to have an important effect on a resident's behavior concerning investment in social capital.4 However, the level of homeownership among neighbors has not been investigated, with the exception of DiPasquale and Glaeser (1999).5 Furthermore, although investment in social capital appears to depend on socio-economic conditions, there are few investigations outside those conducted in Western countries. To compare the results from Western countries with the rest of world, it is necessary to analyze how social capital is accumulated in countries other than Western ones. For instance, comparative studies have shown that the influence of surrounding people on individual behavior is greater in Japan than in United States (e.g., Benedict, 1946, Ames, 1981, Yamagishi, 1988a and Yamagishi, 1988b). In addition, the importance of social capital on the process of economic development in Japan is increasingly recognized (e.g., Yamamura, 2008a, Yamamura, 2008b, Yamamura, 2008c and Yamamura, 2009a). These reports suggest that individual investment in social capital is significantly affected by the character of neighbors in Japan, thereby affecting economic performance. From a comparative view point of regional development, Japan as a case study is thought interesting. This paper uses individual level data from Japan to investigate the effects of individual homeownership and that of neighbors; I then compare the former with the latter. The organization of the remainder of this paper is as follows: in Section 2, the characteristics of Japanese society are outlined to provide a back ground for the study and highlight the features of social capital in Japanese society. Section 3 describes data, methods of analysis and estimation strategies. The results of the estimations and their interpretation are provided in Section 4. The final section offers concluding remarks.

Features of Japanese society concerning social capital appear to be different from those of Western societies, since Japanese people are more likely to be affected by long-term interpersonal relationships. Previous studies have well explored how and the extent to which the incentive to invest in social capital increases when individuals own their home. In western countries such as the United States, the characteristics of surrounding neighbors have an effect on an individual's perception even after controlling for various factors (Luttmer, 2001 and Luttmer, 2005). However, few works attempt to investigate the effects of a neighbor's homeownership on individual investment in social capital. In particular, the neighborhood effect stemming from population immobility is thought to have a greater effect in Japanese society than western ones, since monitoring and sanctioning mechanisms are more effective in Japan. This paper investigates how the circumstances of where a person resides are related to the degree of their investment in social capital using data of 1693 adult participants in the 2003 JGSS survey. Using instrumental variables to control for endogenous bias, I find the following; (1) Not only that an individual's homeownership is positively related to his/her investment in social capital, but also that the rates of homeownership in a locality increase an individual's investments in social capital. (2) The effect of local neighborhood homeownership on investment in social capital is approximately twice that of an individual's homeownership. (3) Residents in larger cities are more likely to invest in social capital than those in smaller ones. This study, by controlling for endogenous bias, showed that that the impact on social capital formation of a neighborhood's immobility is larger than that of an individual's when a person makes a decision regarding investment. What was highlighted in this exploration was that not only an individual‘s characteristics but also the positive externality stemming from neighborhood immobility make a contribution to the formation of social capital and hence should be considered in studies related to social capital. The evidence provided thus far, however, does not support the argument that Japanese people are more likely to behave based on some posited harmonious nature. The fact that residents in rural areas are less likely to invest in social capital than those in urban areas, after controlling for homeownership effects, suggests that traditional Japanese society is rather individualistic and rational when sanctioning and monitoring are not effective. This study did not control for unobservable individual characteristics although these are thought to cause estimation bias. To control for these, a panel data set needs to be used for estimations. That the local group defined in this work does not reflect the geographical scale, and so there is a possibility of measurement errors regarding the rate of homeowners in a locality, needs to be considered. This study was limited to Japan and the findings provided cannot be easily generalized. For the purpose of better verifying the generality of the arguments presented here, a study comparing results from other countries with different socio-cultural backgrounds would be required to be conducted using larger sample sizes. These are issues remaining to be addressed in future studies.