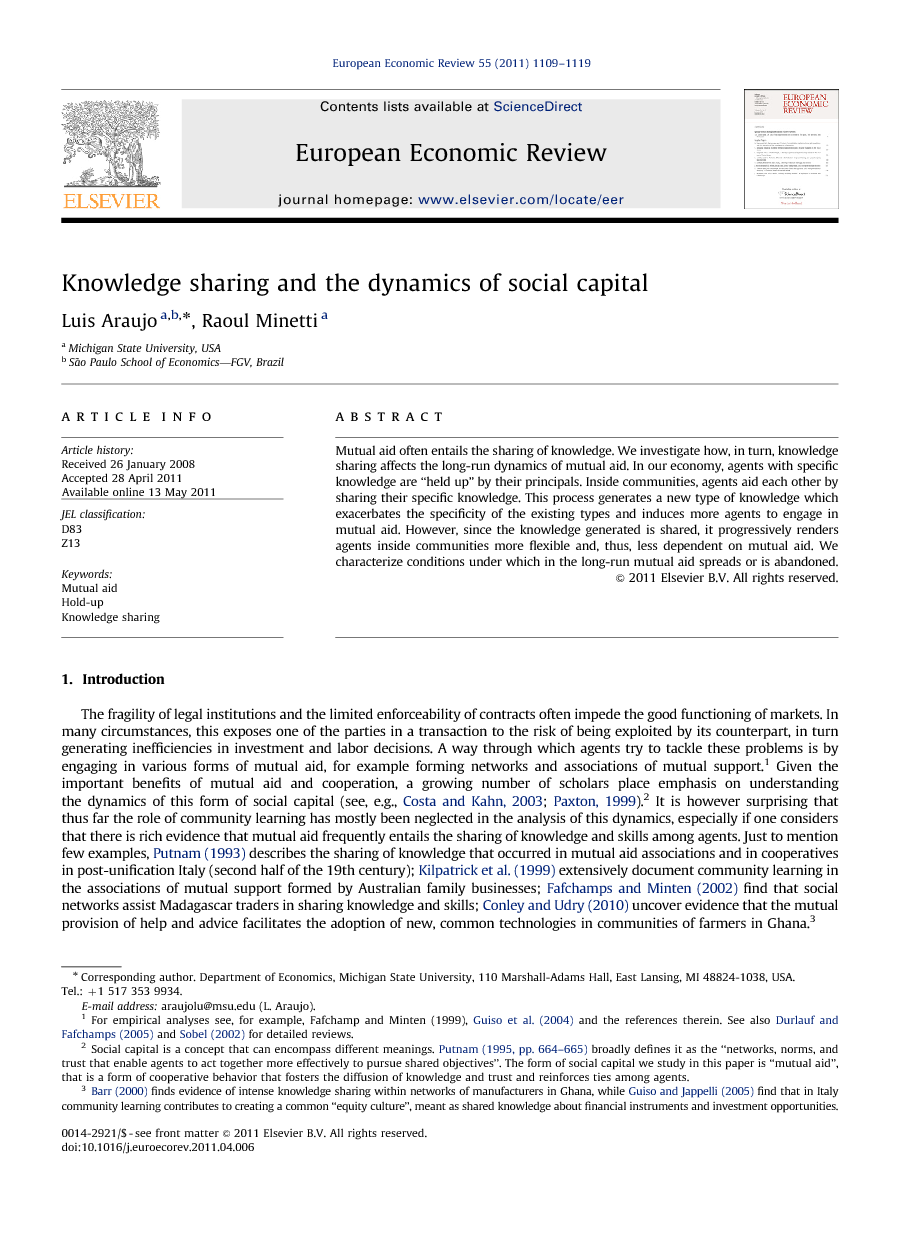 Mutual aid often entails the sharing of knowledge. We investigate how, in turn, knowledge sharing affects the long-run dynamics of mutual aid. In our economy, agents with specific knowledge are “held up” by their principals. Inside communities, agents aid each other by sharing their specific knowledge. This process generates a new type of knowledge which exacerbates the specificity of the existing types and induces more agents to engage in mutual aid. However, since the knowledge generated is shared, it progressively renders agents inside communities more flexible and, thus, less dependent on mutual aid. We characterize conditions under which in the long-run mutual aid spreads or is abandoned.

The fragility of legal institutions and the limited enforceability of contracts often impede the good functioning of markets. In many circumstances, this exposes one of the parties in a transaction to the risk of being exploited by its counterpart, in turn generating inefficiencies in investment and labor decisions. A way through which agents try to tackle these problems is by engaging in various forms of mutual aid, for example forming networks and associations of mutual support.1 Given the important benefits of mutual aid and cooperation, a growing number of scholars place emphasis on understanding the dynamics of this form of social capital (see, e.g., Costa and Kahn, 2003 and Paxton, 1999).2 It is however surprising that thus far the role of community learning has mostly been neglected in the analysis of this dynamics, especially if one considers that there is rich evidence that mutual aid frequently entails the sharing of knowledge and skills among agents. Just to mention few examples, Putnam (1993) describes the sharing of knowledge that occurred in mutual aid associations and in cooperatives in post-unification Italy (second half of the 19th century); Kilpatrick et al. (1999) extensively document community learning in the associations of mutual support formed by Australian family businesses; Fafchamps and Minten (2002) find that social networks assist Madagascar traders in sharing knowledge and skills; Conley and Udry (2010) uncover evidence that the mutual provision of help and advice facilitates the adoption of new, common technologies in communities of farmers in Ghana.3 The objective of this paper is to study the dynamics of mutual aid in an economy where agents support each other by sharing their specific knowledge or skills. We consider a model economy where principals and agents engage in productive matches. Agents have knowledge of different types and types have a limited degree of substitutability. This renders agents specific, exposing them to being “held up” by their principals (as in Caballero and Hammour, 1998, for example). In fact, principals can threaten to withhold “actions” necessary for the survival of the productive matches and, by exploiting agents' limited ability to rematch with other principals, extract rents. In turn, anticipating the hold-up, agents are discouraged from investing in specific productive knowledge. In our economy, a scheme of mutual aid among agents can prevent the hold-up. Inside a community, an agent can aid another by learning and implementing the action necessary for the continuation of her match. Therefore, knowledge sharing prevents principals from threatening to sever matches. We study the impact that the sharing of knowledge has on the diffusion of mutual aid and find that two forces compete with each other. On the one hand, agents inside communities generate a new type of shared knowledge. Over time, this progressively renders the knowledge of agents outside communities more specific, increasing their risk of being held up by principals. Through this force knowledge sharing thus tends to raise agents' incentive to join communities and, hence, fosters the diffusion of mutual aid. On the other hand, because the knowledge generated by mutual aid is shared by all agents inside communities, its diffusion renders agents inside communities more flexible. As a result of the increase in their flexibility, for these agents the hold-up problem becomes progressively less severe and mutual aid loses appeal. Through this force knowledge sharing thus tends to undermine the need for mutual aid inside communities. We investigate conditions under which one of the two forces prevails. We find that mutual aid monotonically increases in importance over time as long as its net benefit is sufficiently large or sufficiently small. When instead the net benefit of mutual aid is in an intermediate range, mutual aid spreads for some time but then begins to decline when the second force starts to dominate. In the latter scenario, mutual aid is abandoned in the long run. Before delving into the analysis a caveat is in order. In this paper, we are not interested in exploring the specific mechanisms though which the sharing of knowledge or skills occurs inside communities but rather its long run impact on the diffusion of mutual aid. Thus, we deliberately model the sharing of knowledge in a parsimonious way that could fit different contexts. The remainder of the paper is organized as follows. In the next section, we relate our contribution to the literature. Section 3 lays out the setup and solves for the dynamics and the steady state. In Section 4, we extend the setup. Section 5 concludes.

We have studied an economy where the diffusion of mutual aid and the flexibility of knowledge (or skills) interact with each other. In our economy, mutual aid represents a response to the risk of exploitation (hold-up) that stems from agents’ lack of flexibility. We have shown that, by facilitating knowledge sharing, mutual aid generates new knowledge, exacerbating the specificity of the existing types of knowledge and inducing more agents to engage in mutual aid. However, since the knowledge generated by mutual aid is shared by all agents inside communities, its diffusion renders agents inside communities more flexible. This progressively erodes the benefit of mutual aid, possibly leading to its decline. In our economy, mutual aid may exhibit a sizable drop and then smoothly decline. This may appear an unappealing feature of the environment. In a longer, working paper version, we show that a smooth dynamics can be attained if we allow for a sluggish adjustment in the diffusion of mutual aid. In particular, we allow for inertial adjustment using an evolutionary game-theoretic approach to describe dynamics. All the results of the paper carry through in this modified environment and the decline of mutual aid becomes smoother. This analysis may offer material for reflection in a methodological perspective. Scholars have recently been exploring the role of institutions in shaping socioeconomic behavior. The long-run impact of institutions on the environment and the feed-back effect on their own relevance is often neglected. For social capital, which inherently builds on interaction and mixing, this issue appears to be especially relevant. Therefore, treating the evolution of the environment as exogenous to the accumulation of social capital may distort the conclusions of researchers.