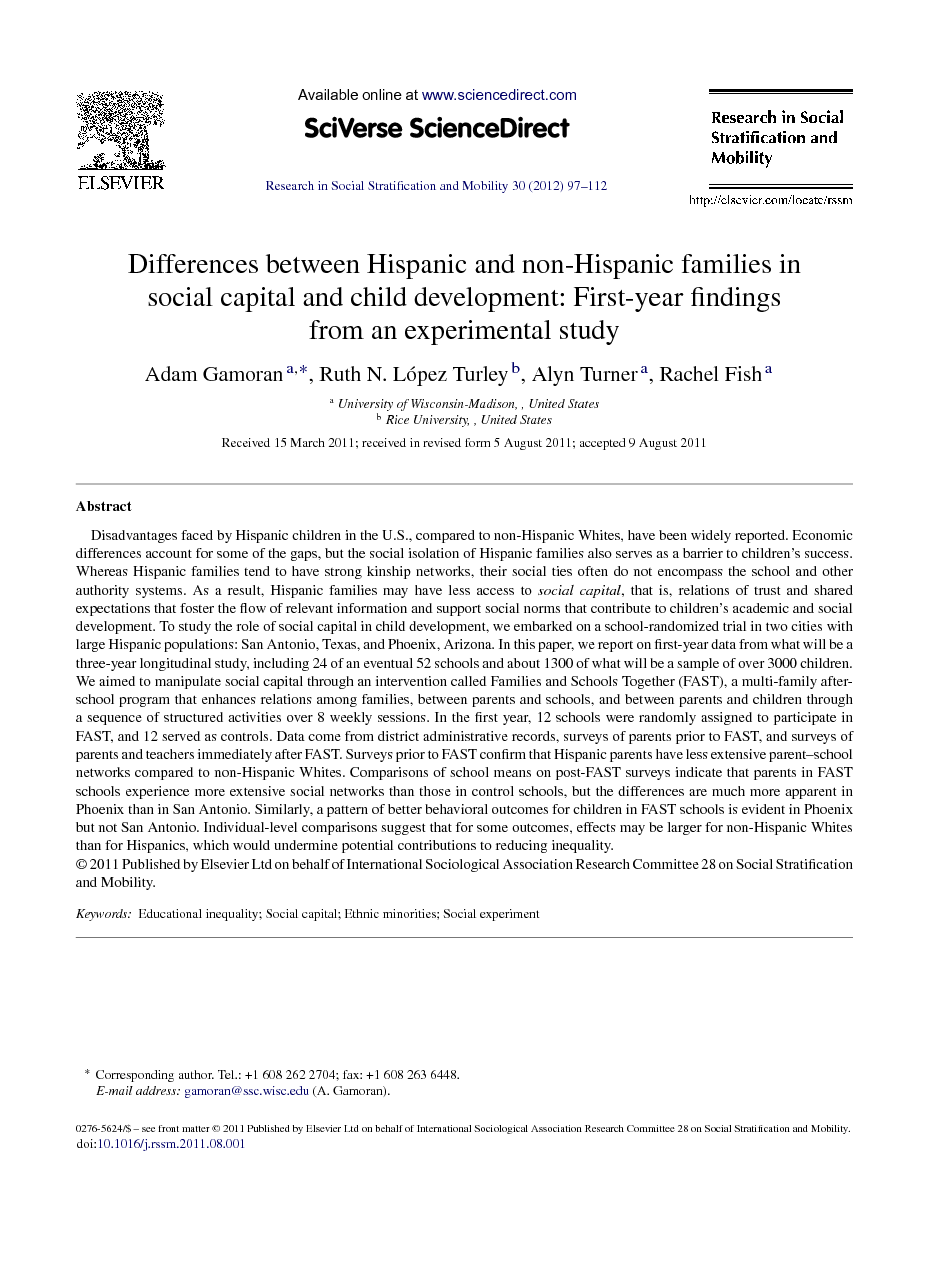 Disadvantages faced by Hispanic children in the U.S., compared to non-Hispanic Whites, have been widely reported. Economic differences account for some of the gaps, but the social isolation of Hispanic families also serves as a barrier to children's success. Whereas Hispanic families tend to have strong kinship networks, their social ties often do not encompass the school and other authority systems. As a result, Hispanic families may have less access to social capital, that is, relations of trust and shared expectations that foster the flow of relevant information and support social norms that contribute to children's academic and social development. To study the role of social capital in child development, we embarked on a school-randomized trial in two cities with large Hispanic populations: San Antonio, Texas, and Phoenix, Arizona. In this paper, we report on first-year data from what will be a three-year longitudinal study, including 24 of an eventual 52 schools and about 1300 of what will be a sample of over 3000 children. We aimed to manipulate social capital through an intervention called Families and Schools Together (FAST), a multi-family after-school program that enhances relations among families, between parents and schools, and between parents and children through a sequence of structured activities over 8 weekly sessions. In the first year, 12 schools were randomly assigned to participate in FAST, and 12 served as controls. Data come from district administrative records, surveys of parents prior to FAST, and surveys of parents and teachers immediately after FAST. Surveys prior to FAST confirm that Hispanic parents have less extensive parent–school networks compared to non-Hispanic Whites. Comparisons of school means on post-FAST surveys indicate that parents in FAST schools experience more extensive social networks than those in control schools, but the differences are much more apparent in Phoenix than in San Antonio. Similarly, a pattern of better behavioral outcomes for children in FAST schools is evident in Phoenix but not San Antonio. Individual-level comparisons suggest that for some outcomes, effects may be larger for non-Hispanic Whites than for Hispanics, which would undermine potential contributions to reducing inequality.

Numerous government reports and research studies have documented the disadvantages of Hispanic children in the United States.1 Differences in social, behavioral, and academic development are evident before children enter formal schooling and increase as they age (Downey et al., 2004, Entwisle et al., 1997, Lee and Burkam, 2002 and West et al., 2000). Test scores of Hispanic children lag far behind those of non-Hispanic Whites, and the gap has shown little sign of narrowing since the 1980s (Rampey et al., 2009).2 Persistent gaps reflect continued immigration, as Hispanics who are proficient in English have caught up slightly with Whites over the last decade, while differences between Hispanics who are English language learners and those who are proficient in English have grown (Hemphill & Vanneman, 2011). Cognitive inequalities among children are also closely linked to socioeconomic inequalities among their parents (Kao & Thompson, 2003). According to the National Center for Education Statistics (2009), only 68% of Hispanic adults have high school diplomas, compared to 94% of Whites. Hispanics are three times as likely as Whites to live in poverty, and Mexican Americans, who make up 59% of the Hispanic population (and almost all of the Hispanics in our study), are particularly disadvantaged economically (Chapa & De La Rosa, 2004). Furthermore, the salience of inequality between Hispanics and Whites will increase in the years to come, not only because Hispanics are the fastest-growing ethnic minority group in the U.S., but also because their population is significantly younger. About 34% of the Hispanic population is under the age of 18, compared to only 21% of the White population (U.S. Census Bureau, 2008). Among second-generation Hispanics, the median age is only 13, meaning that a large majority of them are currently in school (Tienda & Mitchell, 2006). Constituting about 15% of the total U.S. population, the Hispanic population grew by about 57% between 1990 and 2000, whereas the total U.S. population increased by only 13% during that time. If current levels of educational disadvantage are unabated as the Hispanic population expands, then an increasing fraction of the U.S. population will be insufficiently prepared for work and civic life. Thus, the problem is not one for the Hispanic community alone, but for U.S. society as a whole. Without effective intervention, many of these children will grow up to reproduce the disadvantages of their parents (Kao & Thompson, 2003).

For the most part, the results reported in this paper confirm initial expectations about differences between White and Hispanic families in parent social networks. They reveal that parents from Hispanic backgrounds identify fewer school staff whom they would feel comfortable approaching in case of a question or problem, yet those from Spanish language backgrounds have closer connections with other parents whose children attend the same school, compared to other demographic groups. Impact findings reported at this stage are limited in two ways. First, less than half the data are available because the FAST intervention has been implemented in only the first 12 of the 26 treatment schools (and, correspondingly, only the first 12 of the control schools have been studied). Second, the results addressed in this paper come from a very early point, immediately after the FAST intervention, in a study that will yield follow-up data after one year (for parents) and two years (for parents, teachers, and student achievement). With those caveats in mind, preliminary evidence points to promising FAST effects on social capital and child outcomes in Phoenix but not in San Antonio. The reason for the cross-city differences is not clear but two hypotheses may be identified. First, the populations of the two cities are very different. San Antonio is an older, more established community, whereas the districts in our Phoenix sample are growing rapidly and consist of more recent immigrants, including undocumented residents. One possibility, then, is that program impacts are greater in a less settled community. Second, it is possible that implementation occurred with higher quality or greater fidelity in Phoenix than in San Antonio. The preliminary analyses also revealed better behavioral outcomes for children whose families attended FAST than for children whose families did not. This pattern held in San Antonio as well as in Phoenix. We cannot yet say whether this is a causal pattern, but it directs us to examine FAST effects among those who participated in addition to effects among those who were in the FAST schools more broadly. The finding that FAST attendance was linked to more positive outcomes in both cities might suggest that implementation differences are not the main explanation for between-city differences in FAST effects, but at this point it is not clear whether these attendance (or “dosage”) effects should be granted a causal interpretation. Finally, we found possible evidence of differential treatment effects across ethnic groups. In particular the benefits of FAST in Phoenix, where the effects were largest, appear more pronounced for Whites than for either group of Hispanics. This discovery is clearer for parent relationships than for child outcomes, but it is suggestive in both cases. The possibility of differential effects by ethnic groups has profound implications for the larger issues that motivated this study. On the one hand, an intervention that boosts social capital may benefit Hispanic children. On the other hand, if the benefits are greater for Whites, as may be the case for several outcomes, then the social-capital-building intervention we examined will do little to reduce inequality between Hispanic and White children in the U.S. A major concern for the larger study from which this paper draws is whether social capital of parents exerts a causal impact on outcomes for children. We do not address this question directly in this paper, but the findings of this paper are relevant for the larger issue. We found that in one of our two research sites (Phoenix), a program designed to enhance social capital and introduced to schools randomly led to higher levels on both our social capital scales and child outcome scales. In the other site, we found no consistent effects on either social capital or child outcomes. These results are consistent with an interpretation that in Phoenix but not San Antonio, FAST elevated social capital, and social capital enhanced child outcomes. We will examine the full causal chain in our future studies. This paper demonstrates the feasibility of manipulating social capital through a designed intervention, and this points the way towards experimental studies of social capital and other social phenomena. It also shows, however, that interventions may not have the same effect in all population subgroups, a finding that is particularly striking in light of the way FAST embraces cultural adaptations in its implementation process. Finally, the paper reminds us of the importance of understanding the mechanisms through which inequalities are generated so as to better design interventions to combat them.