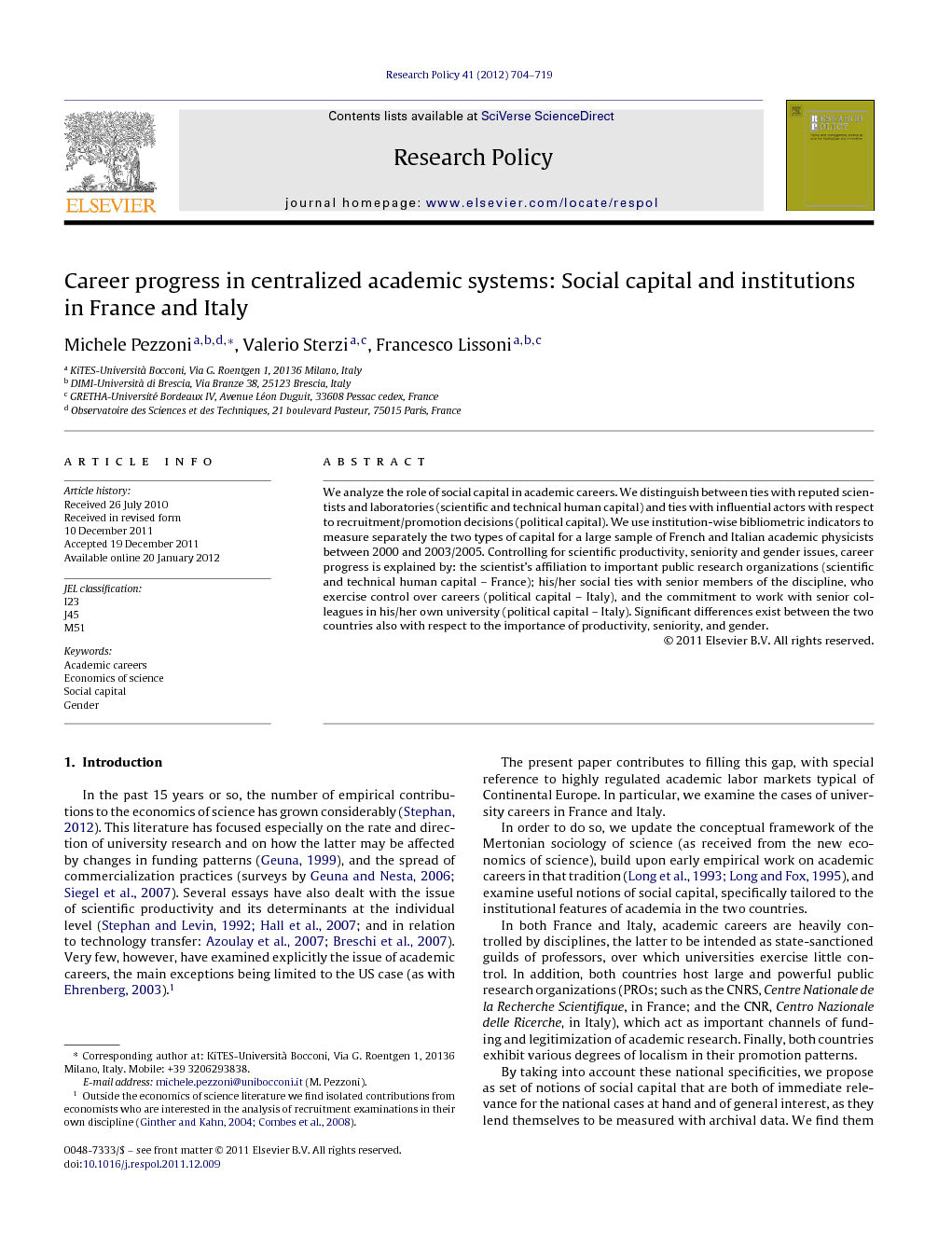 We analyze the role of social capital in academic careers. We distinguish between ties with reputed scientists and laboratories (scientific and technical human capital) and ties with influential actors with respect to recruitment/promotion decisions (political capital). We use institution-wise bibliometric indicators to measure separately the two types of capital for a large sample of French and Italian academic physicists between 2000 and 2003/2005. Controlling for scientific productivity, seniority and gender issues, career progress is explained by: the scientist's affiliation to important public research organizations (scientific and technical human capital – France); his/her social ties with senior members of the discipline, who exercise control over careers (political capital – Italy), and the commitment to work with senior colleagues in his/her own university (political capital – Italy). Significant differences exist between the two countries also with respect to the importance of productivity, seniority, and gender.

In the past 15 years or so, the number of empirical contributions to the economics of science has grown considerably (Stephan, 2012). This literature has focused especially on the rate and direction of university research and on how the latter may be affected by changes in funding patterns (Geuna, 1999), and the spread of commercialization practices (surveys by Geuna and Nesta, 2006 and Siegel et al., 2007). Several essays have also dealt with the issue of scientific productivity and its determinants at the individual level (Stephan and Levin, 1992 and Hall et al., 2007; and in relation to technology transfer: Azoulay et al., 2007 and Breschi et al., 2007). Very few, however, have examined explicitly the issue of academic careers, the main exceptions being limited to the US case (as with Ehrenberg, 2003).1 The present paper contributes to filling this gap, with special reference to highly regulated academic labor markets typical of Continental Europe. In particular, we examine the cases of university careers in France and Italy. In order to do so, we update the conceptual framework of the Mertonian sociology of science (as received from the new economics of science), build upon early empirical work on academic careers in that tradition (Long et al., 1993 and Long and Fox, 1995), and examine useful notions of social capital, specifically tailored to the institutional features of academia in the two countries. In both France and Italy, academic careers are heavily controlled by disciplines, the latter to be intended as state-sanctioned guilds of professors, over which universities exercise little control. In addition, both countries host large and powerful public research organizations (PROs; such as the CNRS, Centre Nationale de la Recherche Scientifique, in France; and the CNR, Centro Nazionale delle Ricerche, in Italy), which act as important channels of funding and legitimization of academic research. Finally, both countries exhibit various degrees of localism in their promotion patterns. By taking into account these national specificities, we propose as set of notions of social capital that are both of immediate relevance for the national cases at hand and of general interest, as they lend themselves to be measured with archival data. We find them to have non-negligible explanatory power for promotion events. In particular, we find that ties to large PROs matter in France, but not in Italy, where connections to senior members’ of one's own discipline are of greater importance. We also find significant differences between the two countries with respect to the importance of productivity, seniority, gender, and the importance of localism. In Section 2, we provide a brief summary of the relevant literature, and discuss the notion of social capital in scientific careers. In Section 3, we discuss the specificities of the Italian and French academic systems, along with the consequences they bear for our analysis. In Section 4 we put forward our analytical statements, and describe our data and methodology. In Section 5 we report and discuss the results of our empirical analysis. Section 6 concludes.

In this paper we have examined the determinants of academic careers in two European countries, Italy and France, whose university and research systems are very different from the US one, to which most of the available literature refers. We have studied the case of physics, and assembled data on academic scientists’ productivity, affiliation, and careers in between 2000 and 2003 (France) or 2000 and 2005 (Italy). We have considered both individual and social determinants of moves to professorial positions for French maîtres des conferences and Italian ricercatori. As for individual determinants (productivity, gender, and seniority), our results are in line with the US-based evidence, although some differences were found between the two countries considered. Coming to social determinants, we have distinguished between social capital that contribute to enhance an individual scientific potential (scientific and technical human capital) and political capital directly bearing an influence on decisions over promotion. In both cases, we have produced bibliometric indicators that try to capture the specificities of the two countries considered. As for scientific and technical human capital, we found that connections to public research organizations (PROs) help academic careers in France, but not in Italy. We take it as a sign of the different influence that PROs exert on universities in the two countries. At the same time, we found that our measures of political capital matter in Italy, but not in France. In particular, Italian potential candidates to professorial positions benefit from intensity of collaboration with full professors (professori ordinari) in their own (narrowly-defined) discipline, who bear direct influence on their selection committees; and also from local collaboration, again with full professors, in more broadly defined disciplines. At a theoretical level, our findings on social capital suggest that it is advisable to analyze networks of scientists not only in terms of knowledge diffusion (as typical of recent literature in the economics of science, and its main analysis of the structure of co-authorship networks), but also in terms of power and rewards for political exchanges. A better understanding of individual scientists’ career incentives and constraints, of the type we tried to provide with our study, may help to evaluate recent reforms in the two countries, which touch upon many aspects of academic life, including recruitment. Both reforms nominally address the problem of university administrations’ weaknesses with respect to the professoriate, but never mention nor address the issue of disciplines; nor they seem to “learn the lesson” from experiments already failed in other countries. In France, the key novelty introduced be the 2007 reform (see footnote 15) has consisted in replacing the commissions de spécialistes with the comités de sélection, with analogous tasks, but fewer links to the local professoriate (Schwartz, 2008). Committee members are now nominated by the non-academic members of the university's board of directors, stay in place only for one concours, and can see their choice of candidates vetoed by the university president (following a request by non-academic members of the university's board of directors). Some incentives have been also put in place that go in the direction of recruiting more external candidates. Still, the system has not changed its fundamentals, with all the academic staff classified by state-sanctioned disciplines, a discipline-based national level of habilitation, and an abundance of top-bottom rules and regulations. And the Italian experience shows (also in our analysis) that having committees in place for just one recruitment decision does not diminish localism. As for Italy, a recently approved, but not yet implemented reform has basically introduced many items typical of the French system, without much consideration for the critiques directed at the latter, and with some paradoxical extras.35 Italian professors will now be recruited following a French-like two-step procedure (habilitation plus local concorso), with local committees composed only of full professors (the same who exercised tight control so far, as shown by our Credit measure), to be in part elected and in part chosen by lot (a practice already experimented and discarded in France several years ago). State-sanctioned disciplinary control over recruitment still will be norm, and possibly strengthened. Besides, while France has coupled the introduction of its reform alongside to a major injection of funds in the academic system, Italy has done the opposite. For example, several budgetary restrictions for replacing retired academic staff with new recruits have been put in place, which will further worsen the current age composition problems. An Agency for the Evaluation of Research and Universities has been put in place, but still no separate sources of funding have been introduced for ordinary expenses (including wages) and research budgets; so it is not clear to anybody what consequences the evaluation exercise will have for universities, and how this should affect recruitment choices. Evaluating the effects of these reforms on academic careers in France and Italy will be the task of future research. Improved measures of political capital will be necessary, especially for disciplines that, differently from physics, do not lend themselves so easily to bibliometric analysis. More precise information on dates of recruitment will be also necessary. In any case, we believe that coupling the general investigation of major themes in the economics of science with country-level specification of career system is the way forward for informing the policy debate on current changes in the European academic system.