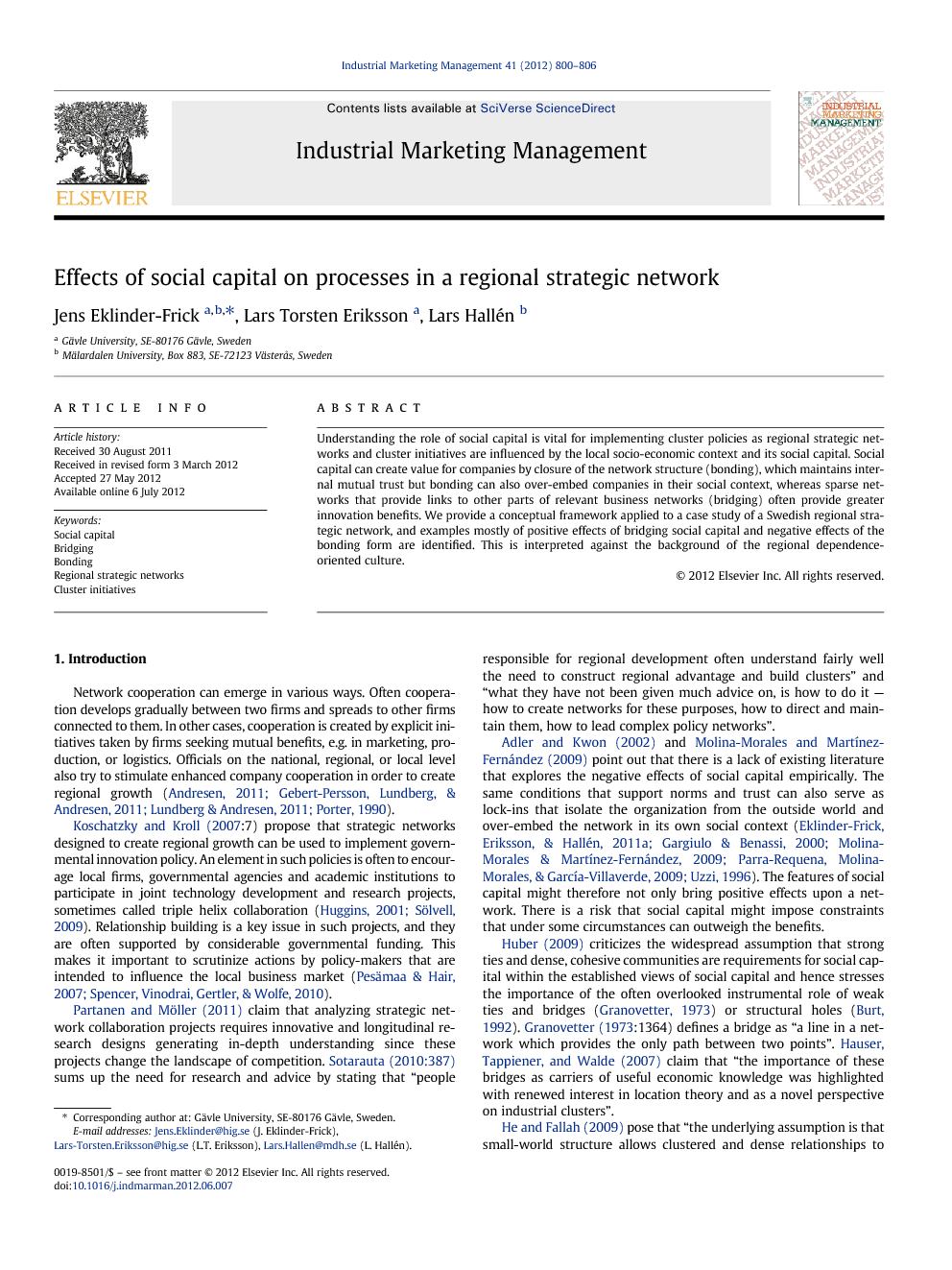 Understanding the role of social capital is vital for implementing cluster policies as regional strategic networks and cluster initiatives are influenced by the local socio-economic context and its social capital. Social capital can create value for companies by closure of the network structure (bonding), which maintains internal mutual trust but bonding can also over-embed companies in their social context, whereas sparse networks that provide links to other parts of relevant business networks (bridging) often provide greater innovation benefits. We provide a conceptual framework applied to a case study of a Swedish regional strategic network, and examples mostly of positive effects of bridging social capital and negative effects of the bonding form are identified. This is interpreted against the background of the regional dependence-oriented culture.

Network cooperation can emerge in various ways. Often cooperation develops gradually between two firms and spreads to other firms connected to them. In other cases, cooperation is created by explicit initiatives taken by firms seeking mutual benefits, e.g. in marketing, production, or logistics. Officials on the national, regional, or local level also try to stimulate enhanced company cooperation in order to create regional growth (Andresen, 2011, Gebert-Persson et al., 2011, Lundberg and Andresen, 2011 and Porter, 1990). Koschatzky and Kroll (2007:7) propose that strategic networks designed to create regional growth can be used to implement governmental innovation policy. An element in such policies is often to encourage local firms, governmental agencies and academic institutions to participate in joint technology development and research projects, sometimes called triple helix collaboration (Huggins, 2001 and Sölvell, 2009). Relationship building is a key issue in such projects, and they are often supported by considerable governmental funding. This makes it important to scrutinize actions by policy-makers that are intended to influence the local business market (Pesämaa and Hair, 2007 and Spencer et al., 2010). Partanen and Möller (2011) claim that analyzing strategic network collaboration projects requires innovative and longitudinal research designs generating in-depth understanding since these projects change the landscape of competition. Sotarauta (2010:387) sums up the need for research and advice by stating that “people responsible for regional development often understand fairly well the need to construct regional advantage and build clusters” and “what they have not been given much advice on, is how to do it — how to create networks for these purposes, how to direct and maintain them, how to lead complex policy networks”. Adler and Kwon (2002) and Molina-Morales and Martínez-Fernández (2009) point out that there is a lack of existing literature that explores the negative effects of social capital empirically. The same conditions that support norms and trust can also serve as lock-ins that isolate the organization from the outside world and over-embed the network in its own social context (Eklinder-Frick et al., 2011a, Gargiulo and Benassi, 2000, Molina-Morales and Martínez-Fernández, 2009, Parra-Requena et al., 2009 and Uzzi, 1996). The features of social capital might therefore not only bring positive effects upon a network. There is a risk that social capital might impose constraints that under some circumstances can outweigh the benefits. Huber (2009) criticizes the widespread assumption that strong ties and dense, cohesive communities are requirements for social capital within the established views of social capital and hence stresses the importance of the often overlooked instrumental role of weak ties and bridges (Granovetter, 1973) or structural holes (Burt, 1992). Granovetter (1973:1364) defines a bridge as “a line in a network which provides the only path between two points”. Hauser, Tappiener, and Walde (2007) claim that “the importance of these bridges as carriers of useful economic knowledge was highlighted with renewed interest in location theory and as a novel perspective on industrial clusters”. He and Fallah (2009) pose that “the underlying assumption is that small-world structure allows clustered and dense relationships to coexist with distant and weak relationships, as the dense and clustered relationships encourage trust and close collaboration, whereas distant ties act as bridges for fresh and non-redundant information to flow”. Parmigiani and Rivera-Santos (2011) agree and postulate that “organizations require a mix of both strong and weak ties, since strong ties involve deeper exchanges, while weak ties provide more breadth and diversity of knowledge and resources”. Combining different patterns of bonding and bridging is therefore seen as necessary for successful collaboration and for exploiting the creative potential of social capital (Daskalaki, 2010 and Slotte-Kock and Coviello, 2010). Osborne, Baum, and Ziersch (2009:214) claim that “much of the social capital literature relies upon the assumption that social capital arises from participation in a uniform fashion and leads to beneficial outcomes for all involved, rather than considering how participation in some types of groups, in some situations, may be beneficial, whereas other types of participation in different contexts may not”. According to Alguezaui and Filieri (2010), most scholars have highlighted the benefits of both cohesive and sparse networks, failing to analyze more deeply their detrimental effects. Alguezaui and Filieri (2010) therefore suggest that future research exploring social capital should close the gap and empirically prove the benefits of a balanced approach. Dense networks and trustful close relationships have been the focus of much prior research within the field of social capital (Daskalaki, 2010, Hauser et al., 2007 and Huber, 2009) although innovative collaboration is seen as dependent upon weak and bridging ties (Alguezaui and Filieri, 2010 and He and Fallah, 2009). This creates a need to investigate empirically both positive and negative effects of social capital within collaborative projects. Negative effects of bridging and bonding are reported by Eklinder-Frick, Eriksson, and Hallén (2011b), and by extending the analysis also to positive effects, we aim to answer the call for “closing the gap and empirically prove the benefits of a balanced approach” as posed by Alguezaui and Filieri (2010).

Social capital as a resource can be called a two-sided coin (Eklinder-Frick et al., 2011b) which implies both advantages and drawbacks for the involved companies and for regional development, and previous research states that social capital is a concept with causal implications that are far from clear (Hauser et al., 2007, Huber, 2009 and Sabatini, 2007). This implies that a balanced approach between bridging and bonding ties is preferable (Parmigiani & Rivera-Santos, 2011) and that a focus solely upon the positive effects of social capital might be detrimental (Alguezaui and Filieri, 2010 and Osborne et al., 2009). The results from our case study are in accordance with these observations, and problems with the effects of the bonding form of social capital were particularly clear. This is noteworthy, as the official aims of cluster initiatives and regional strategic networks often focus on strengthening bonds within the networks. There is a danger in relying too much on preconceived notions of the effects of social capital. There is an interaction effect between the bonding and bridging forms of social capital. It can be seen from the case study that the management group of the RSN focused on building bridges by strengthening weak ties between previously unconnected or merely loosely connected actors in a region dominated by the bonding form of social capital but with moderate success due to a rigid network structure. This highlights the importance of the managerial role in leading and defining the tasks of a regional strategic network and the complexity of encouraging other actors to participate. Our empirical data show more examples of positive effects of bridging social capital and more negative effects of the bonding form. This, however, does not imply any measurement of the resulting outcome. That would require both stricter definitions and formal operationalizations. Moreover, these effects often seem to oppose each other, which highlights the duality of social relations. The attempt made by the management group of the RSN to establish bridging ties between the two subgroups resulted in both deeper understanding among the member companies for the benefits of vertical collaboration and a less detached attitude regarding their own production. Still, the two subgroups did not merge, since the boundaries imposed between them by the bonding form of social capital kept network mobility low. No technology broker emerged distributing knowledge within the network, and no innovative environment was developed. However, some steps towards a more open climate for forming bridging ties were taken, and the constraints of the dependence-oriented culture imposed by the industrial history of the region were relaxed. Still, the RSN project did not reach its goal to foster innovation. This might be due to the limited time span often imposed by the funding conditions, as it takes time to change network structures. Knowingly balancing the bridging and bonding forms of social capital and being aware of the ensuing effects, are steps towards formulating realistic ambitions for strategic network collaboration.