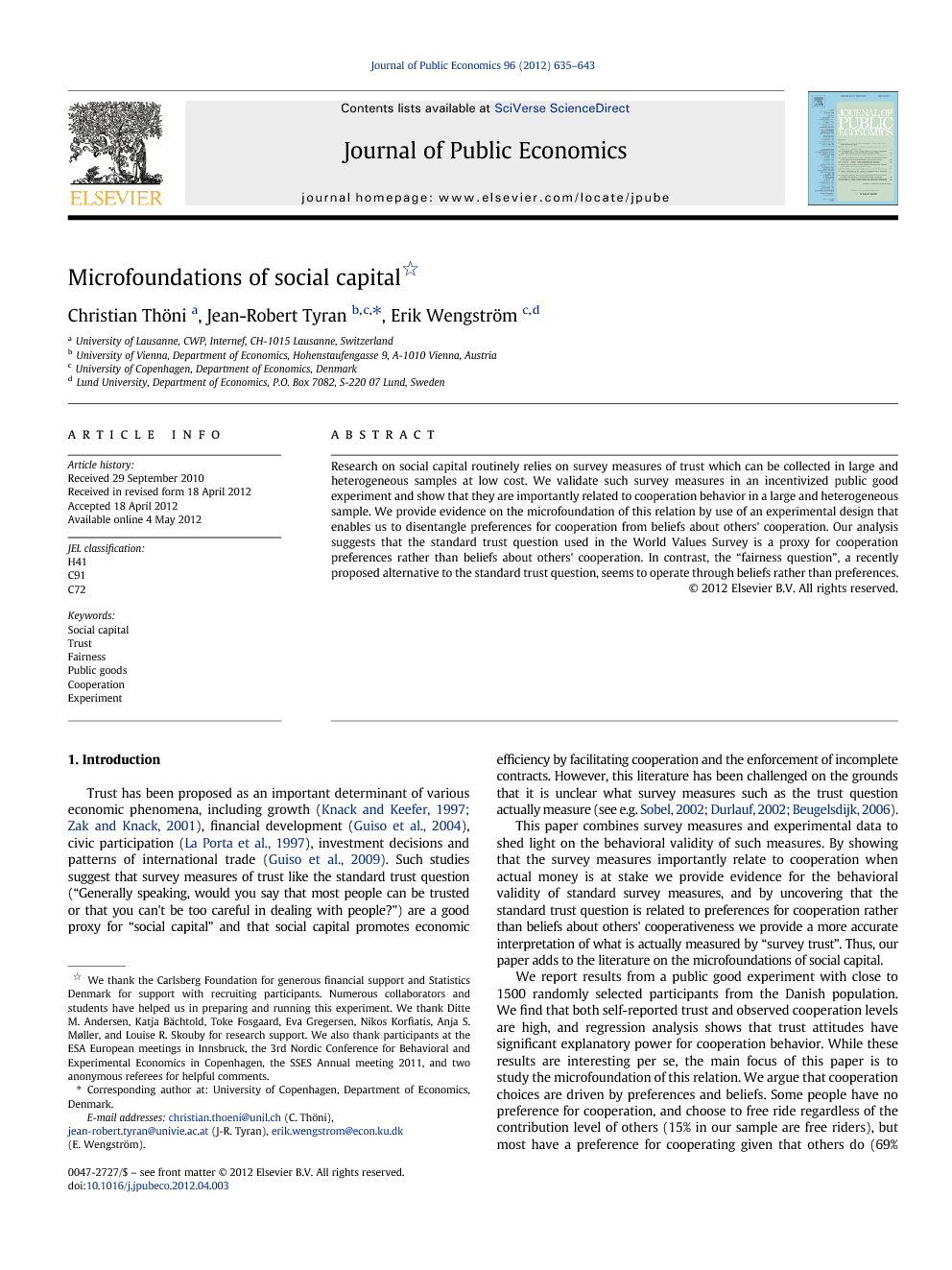 Research on social capital routinely relies on survey measures of trust which can be collected in large and heterogeneous samples at low cost. We validate such survey measures in an incentivized public good experiment and show that they are importantly related to cooperation behavior in a large and heterogeneous sample. We provide evidence on the microfoundation of this relation by use of an experimental design that enables us to disentangle preferences for cooperation from beliefs about others' cooperation. Our analysis suggests that the standard trust question used in the World Values Survey is a proxy for cooperation preferences rather than beliefs about others' cooperation. In contrast, the “fairness question”, a recently proposed alternative to the standard trust question, seems to operate through beliefs rather than preferences.

We use data from an experiment with close to 1500 participants from all walks of life in Denmark to show that the most prominent survey measure of trust (Trust) is an important predictor of social capital in the guise of voluntary contributions to public goods. Our analysis behaviorally validates survey measures and contributes to the microfoundations of social capital by suggesting that Trust proxies the preference-driven component of cooperation. Trust is a stronger predictor of cooperation preferences than gender, age, education or salary. In contrast, our analysis indicates that an alternative survey measure of social capital that has recently been introduced to the World Values Survey, the Fairness question, primarily explains optimistic beliefs about cooperation in others. These optimistic beliefs map into increased cooperation because most participants have preferences to cooperate given that others do, i.e. because they are conditional cooperators. Apart from this belief-mediated effect, we find no direct influence of Fairness on cooperation. The effects of Trust and Fairness on cooperation are statistically significant in regressions which control for socio-economic variables like age, gender, salary and education. The effects are not only statistically significant, they are also sizeable. For example, those who trust contribute about 10% more than those who do not, and those who indicate full confidence in other people's fairness contribute about 20% more than those who express minimal confidence in other's fairness. These effects are remarkably strong, both compared to findings in the literature and compared to alternative explanations. First, research in social psychology suggests that the relation between attitudes and behavior is often rather weak (e.g. Eagly and Chaiken, 1993), and previous studies on the relation between survey and experimental measures of social capital tend to find mixed effects (see introduction for references). Second, in line with much of the literature, we find that cooperation behavior is mainly driven by beliefs. However, if beliefs are not accounted for in regressions, Trust and Fairness variables account for more variation than our socio-economic variables. We show that Trust and Fairness are systematically related to cooperation in a one-shot interaction with fully anonymous counterparts, i.e. in a situation without prior information about or experience with their counterparts. Thus, Trust and Fairness capture important aspects of “thin” trust towards a “generalized other” which has been found to be a relevant determinant of economic prosperity. Beliefs are likely to be particularly relevant in such anonymous one-shot interactions. After all, optimism and pessimism about others' inclination to cooperate matter most when little is known about actual cooperation. However, in everyday life, cooperation problems often loom large in groups whose members repeatedly interact, as in the workplace or repeat customer relations. Based on our results, we speculate that “thick” trust which is required in this type of repeated interaction is better predicted by Trust than by Fairness. The reason is that beliefs about cooperation are adjusted to observed contributions over time and, therefore, are likely to eventually become largely irrelevant as an independent determinant of behavior. A long-standing debate in the social sciences concerns the appropriate choice of policies to improve cooperation. A recent focus of research in (experimental) economics has been on the relative merits of formal vs. informal sanctions to deter uncooperative behavior (see e.g. Markussen et al., 2011 for a discussion). While often effective, both types of policies can be rather costly because meting out sanctions is wasteful. In contrast, policies that rely on “belief-management” as e.g. proposed by the “broken windows” theory, do not rely on wasteful sanctions and may be effective in some circumstances (see Keizer et al., 2008 or Fellner et al., forthcoming for field experiments). Such policies aim at improving cooperation by correcting exceedingly pessimistic beliefs about other peoples' inclination to cooperate. According to our results, the survey measure of Fairness provides an inexpensive diagnostic tool indicating when resorting to policies involving belief-management may be worthwhile.