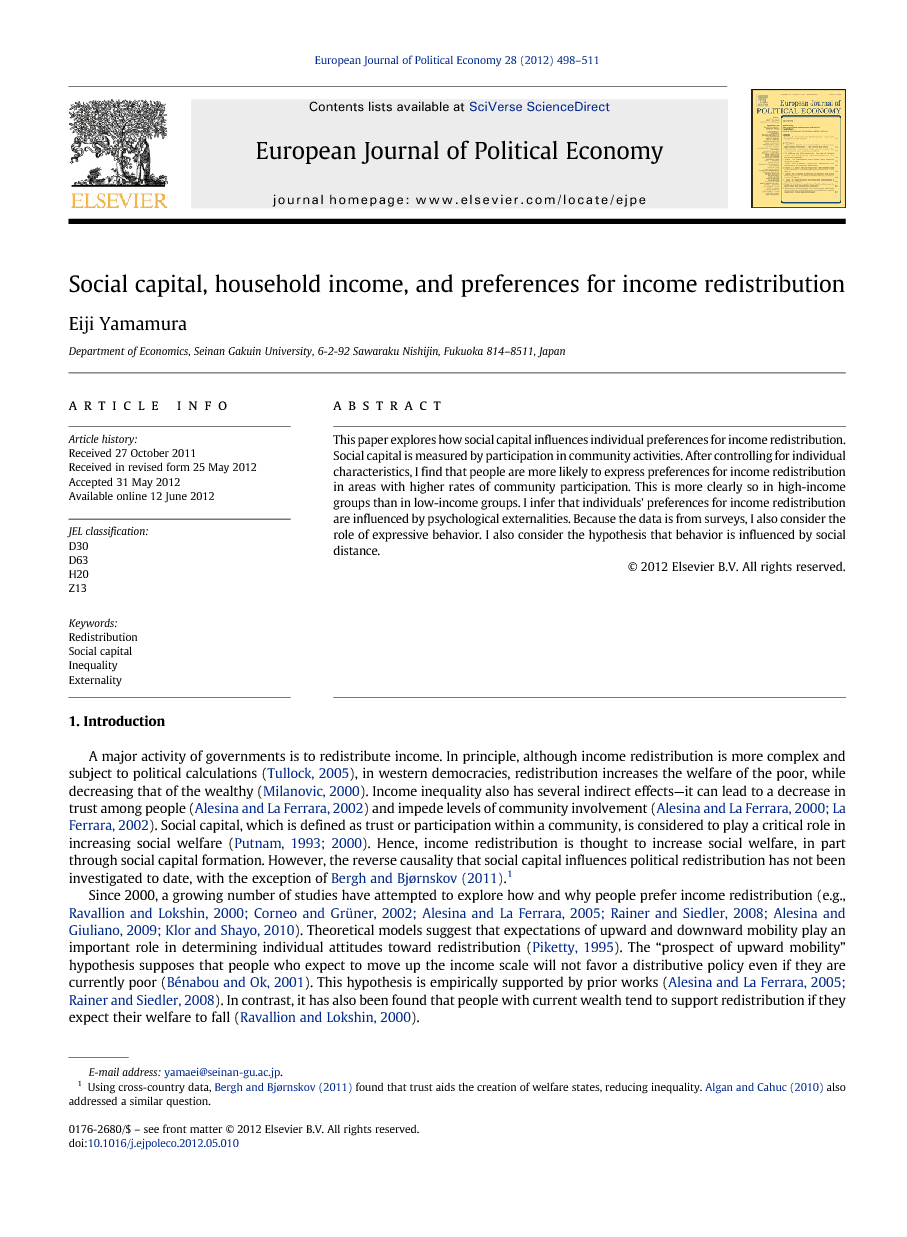 A major activity of governments is to redistribute income. In principle, although income redistribution is more complex and subject to political calculations (Tullock, 2005), in western democracies, redistribution increases the welfare of the poor, while decreasing that of the wealthy (Milanovic, 2000). Income inequality also has several indirect effects—it can lead to a decrease in trust among people (Alesina and La Ferrara, 2002) and impede levels of community involvement (Alesina and La Ferrara, 2000 and La Ferrara, 2002). Social capital, which is defined as trust or participation within a community, is considered to play a critical role in increasing social welfare (Putnam, 1993 and Putnam, 2000). Hence, income redistribution is thought to increase social welfare, in part through social capital formation. However, the reverse causality that social capital influences political redistribution has not been investigated to date, with the exception of Bergh and Bjørnskov (2011).1 Since 2000, a growing number of studies have attempted to explore how and why people prefer income redistribution (e.g., Ravallion and Lokshin, 2000, Corneo and Grüner, 2002, Alesina and La Ferrara, 2005, Rainer and Siedler, 2008, Alesina and Giuliano, 2009 and Klor and Shayo, 2010). Theoretical models suggest that expectations of upward and downward mobility play an important role in determining individual attitudes toward redistribution (Piketty, 1995). The “prospect of upward mobility” hypothesis supposes that people who expect to move up the income scale will not favor a distributive policy even if they are currently poor (Bénabou and Ok, 2001). This hypothesis is empirically supported by prior works (Alesina and La Ferrara, 2005 and Rainer and Siedler, 2008). In contrast, it has also been found that people with current wealth tend to support redistribution if they expect their welfare to fall (Ravallion and Lokshin, 2000). The existing literature that explores the determinants of preference for redistribution does not sufficiently consider the effect of interaction among people. However, an individual's perception and behavior are thought to be influenced by the people around them and the neighboring community structure (e.g., Alesina and La Ferrara, 2000, Alesina and La Ferrara, 2002, La Ferrara, 2002, Jensen and Harris, 2008 and Shields et al., 2009). There are empirical works that support the hypothesis that it is “relative” income rather than “absolute income” that has an effect on the degree of happiness (e.g., Clark and Oswald, 1996, Neumark and Postlewaite, 1998, McBride, 2001, Stutzer, 2004 and Luttmer, 2005). Veblen (1899) argued that “conspicuous consumption” by rich people serves to impress other people. However, it seems plausible that poor people envy rich people, and therefore hope that the rich will become poor. Owing to such externalities, rich people are likely to be unhappy. In this case, rich people tend to support income redistribution, thereby reducing the externality, and achieving increased levels of happiness.2 This possibility seems to be more likely when the rich and poor meet and interact more frequently. In other words, rich people are more likely to support income redistribution when people are more inclined to participate in social activities. However, little is known regarding the interaction mechanism for redistribution. Thus, it is worthwhile to examine how and the extent to which the preference for redistribution is affected by interactions among people. Furthermore, preference appears to be significantly affected by structure and traditional societal values (Alesina et al., 2004 and Chang, 2010). However, existing literature on redistribution preferences has focused largely on Western countries, with the exception of Ohtake and Tomioka (2004) and Chang (2010). Asian countries are characterized by the fact that their cultures and societies are different from those of Western countries, and as such it would be a valuable and necessary exercise to consider the preference for income redistribution in Asian countries. To this end, this paper attempts to compare the effect of social capital on preferences for redistribution between poor and rich groups using Japanese General Social Surveys (JGSS), which include more than 10,000 observations. I found that people are more inclined to prefer income redistribution in areas where residents are more actively involved in community activities. This tendency was more clearly observed for people from high-income groups than with people in low-income groups. This paper is in line with Alesina et al. (2004), which marks the crossroad for the determinants of happiness and preferences for redistribution. The remainder of this paper is organized as follows. In Section 2, the testable hypotheses are discussed. Section 3 provides an explanation regarding data and the empirical method used. Section 4 presents the estimation results and their interpretation. The final section offers some conclusions.

Individuals feel worse off when others around them earn more, and so residents are concerned not only about their income but also the average local income. The influence of relative income is greater for those who socialize more in their neighborhood (Stutzer, 2004 and Luttmer, 2005). Preference for income redistribution are inevitably influenced by relative income and also by social capital captured by frequency of contact with neighbors. However, little is known about the effect of social capital on preferences for income redistribution. Further, there is the possibility that people who feel happier are more likely to socialize with neighbors. Accordingly, the causality between socialization and happiness is ambiguous. To alleviate this bias, this paper focused on the degree of social capital present in the neighborhoods of individuals, rather than by looking at socialization. In this paper, social capital was measured by the rate of participation in community activities in 1996. Matching this data with micro data from JGSS for 2000–2008, I estimated the effect of social capital in residential areas on preferences for income redistribution. The major findings are that after controlling for various individual characteristics, people are more likely to prefer income redistribution in areas where there are higher rates of community participation. This is in line with Luttmer (2005), implying that the consumption externality suggested by Becker (1974) depends on the degree of frequency of personal interaction within a community. The effect of social capital on preference for income redistribution was more clearly observed in the high-income group than the low-income group. From this, I derive the argument that for rich people, frequency of interaction increases the effect of the negative externality caused by the envy of poorer people. Further, the effect of the negative externality outweighs the negative effect of reducing the income of the wealthy via income redistribution policies. Because the data is from surveys, the findings of this paper are also consistent with expressive behavior. The results also support the social distance hypothesis. In rural Asian villages, it has been observed that an individual with a higher socioeconomic status will use his/her own influence and resources to provide protection and/or benefits to someone with a lower status (Hayami, 2001). Such relationships are called patron–client relationships by anthropologists and sociologists (Scott, 1972). Rural Asian villages are characterized by long-term and intensive personal interactions between village members. Even in modern Japanese society, when community members frequently attend community events and interact with each other, the relationships between members mirror the relationships in rural villages. If such relationships exist to a certain extent in modern Japanese society, then the wealthy are expected to play the role of patron and offer patronage to the poor (client). The finding that social capital leads the rich to prefer income redistribution possibly reflects the cultural and anthropological characteristics of parts of Asia. However, the effect of the residential area characteristics appeared to vary according to individual characteristics. That is, even when individuals live in tightly knit communities with significant social capital, their preferences are not necessarily influenced by neighboring people if they do not socialize in the neighborhood. Owing to a lack of data, however, this paper cannot explore this issue further. Furthermore, Japan is generally characterized as a racially homogenous society. Aside from such homogeneity, Japan's historical and cultural backgrounds also distinguish it from Western countries. Effect of social capital varies according to institutional strength (Ahlerup et al., 2009). Hence, to test the generality of these findings, it is necessary to examine the hypotheses proposed in this paper using other countries with different characteristics. In addition, the generalized trust appears to be related to income inequality (Uslaner, 2008). Inevitably, generalized trust is thought to influence redistribution preferences. Thus, it would be worthwhile to investigate how generalized trust affects preferences by controlling for endogeneity bias. These remaining issues require attention in future studies.