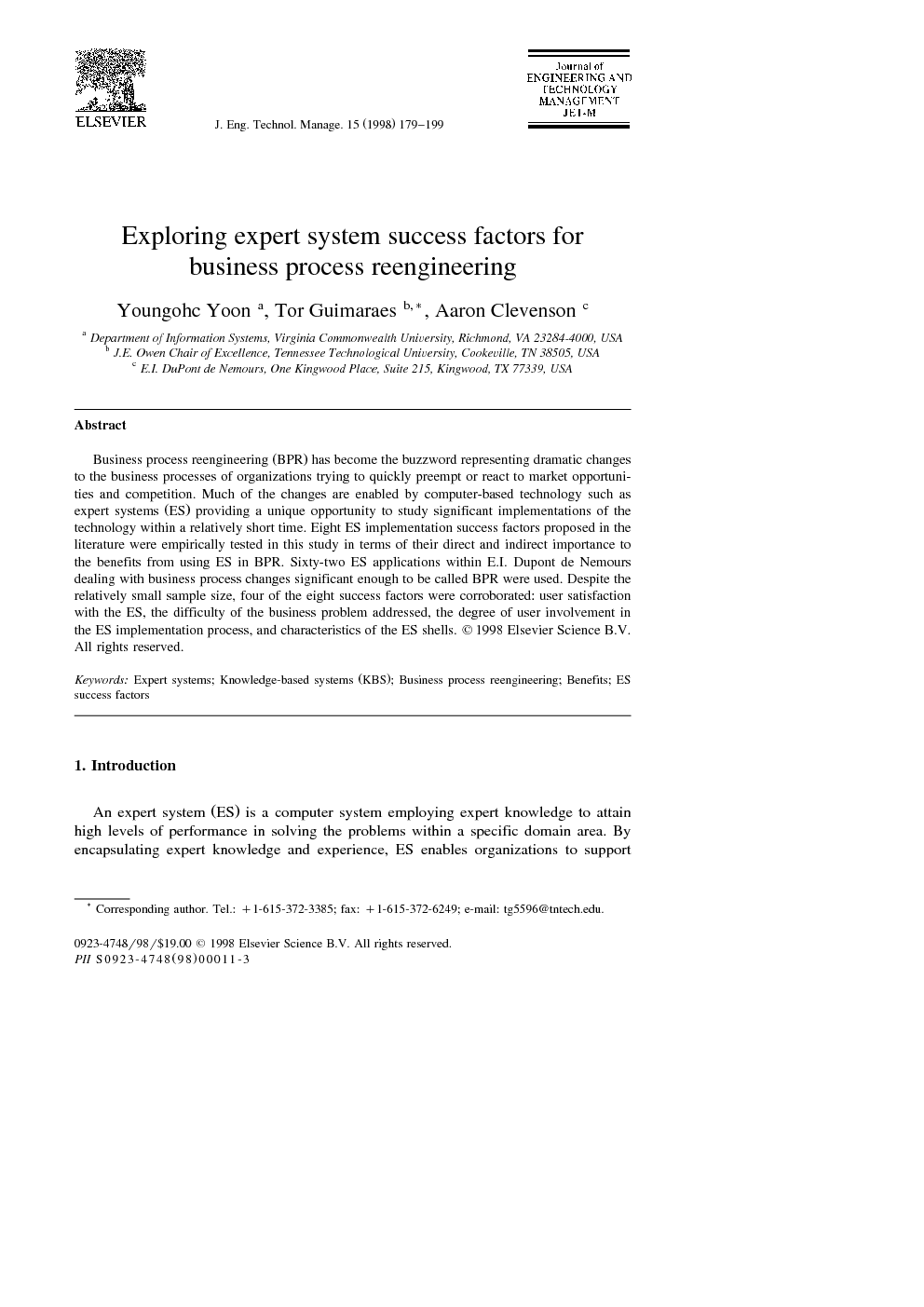 Business process reengineering (BPR) has become the buzzword representing dramatic changes to the business processes of organizations trying to quickly preempt or react to market opportunities and competition. Much of the changes are enabled by computer-based technology such as expert systems (ES) providing a unique opportunity to study significant implementations of the technology within a relatively short time. Eight ES implementation success factors proposed in the literature were empirically tested in this study in terms of their direct and indirect importance to the benefits from using ES in BPR. Sixty-two ES applications within E.I. Dupont de Nemours dealing with business process changes significant enough to be called BPR were used. Despite the relatively small sample size, four of the eight success factors were corroborated: user satisfaction with the ES, the difficulty of the business problem addressed, the degree of user involvement in the ES implementation process, and characteristics of the ES shells.

An expert system (ES) is a computer system employing expert knowledge to attain high levels of performance in solving the problems within a specific domain area. By encapsulating expert knowledge and experience, ES enables organizations to support important decision making and improve organization productivity. Today, ES have demonstrated their potential, gained credibility, and are being widely used to solve a variety of business problems in industry and government (Hayes-Roth and Jacobstein, 1994). Due to its capability to effectively improve the way an organization does business, many ES applications have been used to change a variety of business processes (Acorn and Walden, 1993; Hamscher, 1994a; Lazarus et al., 1993; McManus and Garland, 1993; Nguyen and Czerwinsksi, 1993; Pierson and Gallant, 1993). There are many examples of ES applications used to dramatically change old business processes. In one case, SMART at Compaq has enhanced the effectiveness of its customer support staff by distributing problem-solving knowledge to the entire support staff at the point it is needed (Acorn and Walden, 1993). Moreover, QuickSource has enabled Compaq to empower its customers with expert knowledge which allows them to solve advanced network printer problems entirely on their own (Nguyen and Czerwinsksi, 1993). With the use of ES technology, Compaq has reengineered its customer support strategy and implementation. In another organization, MPSA and COLES are two interrelated systems which offer automated expert support to AT&T's scheduling and customer service staffs by improving and expanding the utility of existing legacy mainframe systems (McManus and Garland, 1993). At Bell Atlantic, SNNS was developed to provide automated support for the sales-service negotiation process (Carr et al., 1994). This system has significantly improved sales efficiency and optimized customer contact time. Due to their effectiveness in improving existing business processes, ES have been recognized as important implementation vehicles for business process reengineering (BPR) (Friedenberg and Rice, 1994; Hamscher, 1994b). However, in many cases ES development and implementation has failed for a variety of reasons, including instances when systems were rejected by their target user communities (Coats, 1988; Keyes, 1989b; Sloane, 1991). Thus, a central issue deals with the factors affecting ES success or failure under the time constraints created by BPR projects. This also becomes increasingly important as managers contemplate investing company resources, time and effort into establishing the infrastructure for adopting or expanding the use of ES technology. The purpose of this study is to empirically test the various factors affecting ES success when the system is used for BPR, as contrasted with the use of ES for merely automating existing business processes or making relatively small changes. Much of the research on MIS implementation research has been focused on identifying the factors which appear to be conducive to either success or failure of other types of computer-based information systems (Guimaraes et al., 1992; Liang, 1986). In the context of ES, many success factors have been reported (Ignizio, 1991; Keyes, 1989b; Prerau, 1990; O'Neal, 1990; Turban, 1992b; Yoon et al., 1995). Although most of the findings have been on the basis of personal opinion, some recent studies have empirically tested ES success factors (Yoon et al., 1995). The independent variables in this study, the factors related to ES success reported in the literature, were categorized into seven groups: problem importance, problem difficulty, developer(s) skill, end-user(s) characteristics, shell characteristics, user involvement, and management support. Some of these success factors are not unique to ES implementations. The vast majority of the studies deal with transaction processing systems (TPS), decision support systems (DSS), executive information systems (EIS), or other computer-based information systems besides ES. The basis for an ES is the capture and use of knowledge from high-level experts to assist the less proficient ES end-users. The other systems deal with the flow of data and information through the organization unit, and their development requires considerable end-user input to define the nature, functions and features of the system. Therefore, for TPS, EIS and DSS, the end-users are the `domain experts.' ESs are also dramatically different from other types of systems in other ways. TPSs perform routine data processing and focus on business procedures. DSSs support decisions and focus on computational and statistical models. On the other hand, while ESs also make or support decisions, they focus on knowledge/expertise rather than on transaction processing or computational techniques (Duda and Shortliffe, 1983). ESs are heuristics-based and are particularly viable for problems that cannot be solved algorithmically (Writzel and Kerschberg, 1989). Given the dramatically different nature of ES, results obtained from previous studies are likely to provide at best a partial picture of the major issues surrounding ES development and implementation in practice. There are several reasons why studies dealing specifically with ES are important and must be undertaken: (1) despite widespread use and increasing importance of ES technology, little effort has been made to systematically identify and empirically test the determinants of ES success; (2) managers responsible for the development and implementation of ES cannot assume that the set of determinants for success with other system types are equally important for ES (even if one believes that to be so, this assumption must be tested empirically); (3) many important factors are unique to ES, i.e., their `expert mimicking' nature, the domain-oriented problems addressed, the characteristics of ES shells, the required activities and characteristics of domain experts and knowledge engineers, and their unique relationship with end-users; (4) the reports about ES (Barsanti, 1990; Ignizio, 1991; Keyes, 1989a; O'Neal, 1990; Prerau, 1990; Smith, 1988) are mostly based on the opinion and personal experience of one individual and have not been empirically tested; and (5) the strategic importance (thus a relative budget and time intensity) associated with BPR projects offers a unique opportunity to assess the impact of ES technology in a dramatically changed business environment. Empirical studies conducted by Yoon et al. (1995), Byrd (1992)and Tyran and George (1993)represent just the beginning of an effort to understand the factors surrounding ES implementation. Much more research is needed to build a theoretical foundation in this important area.