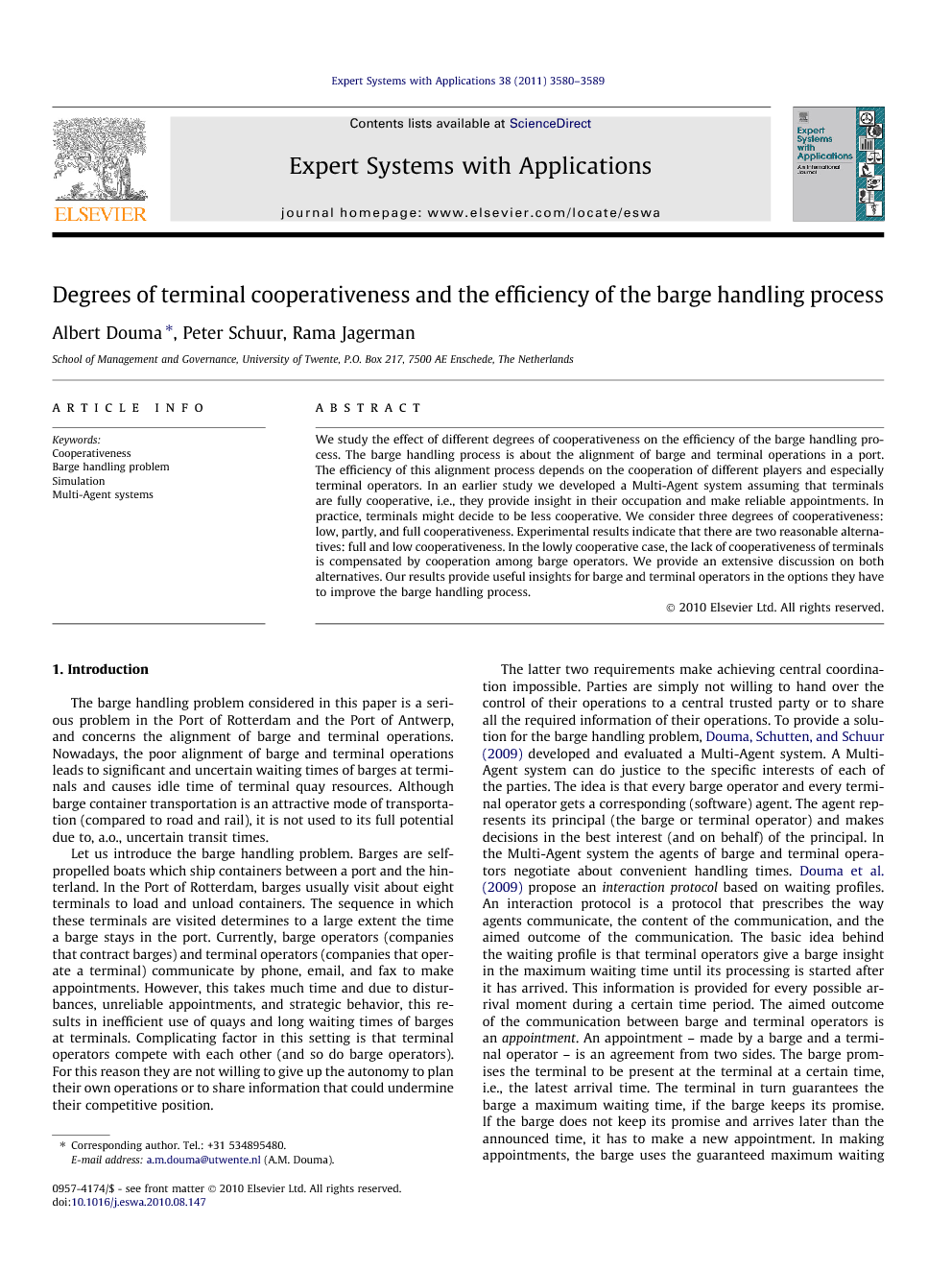 The barge handling problem considered in this paper is a serious problem in the Port of Rotterdam and the Port of Antwerp, and concerns the alignment of barge and terminal operations. Nowadays, the poor alignment of barge and terminal operations leads to significant and uncertain waiting times of barges at terminals and causes idle time of terminal quay resources. Although barge container transportation is an attractive mode of transportation (compared to road and rail), it is not used to its full potential due to, a.o., uncertain transit times. Let us introduce the barge handling problem. Barges are self-propelled boats which ship containers between a port and the hinterland. In the Port of Rotterdam, barges usually visit about eight terminals to load and unload containers. The sequence in which these terminals are visited determines to a large extent the time a barge stays in the port. Currently, barge operators (companies that contract barges) and terminal operators (companies that operate a terminal) communicate by phone, email, and fax to make appointments. However, this takes much time and due to disturbances, unreliable appointments, and strategic behavior, this results in inefficient use of quays and long waiting times of barges at terminals. Complicating factor in this setting is that terminal operators compete with each other (and so do barge operators). For this reason they are not willing to give up the autonomy to plan their own operations or to share information that could undermine their competitive position. The latter two requirements make achieving central coordination impossible. Parties are simply not willing to hand over the control of their operations to a central trusted party or to share all the required information of their operations. To provide a solution for the barge handling problem, Douma, Schutten, and Schuur (2009) developed and evaluated a Multi-Agent system. A Multi-Agent system can do justice to the specific interests of each of the parties. The idea is that every barge operator and every terminal operator gets a corresponding (software) agent. The agent represents its principal (the barge or terminal operator) and makes decisions in the best interest (and on behalf) of the principal. In the Multi-Agent system the agents of barge and terminal operators negotiate about convenient handling times. Douma et al. (2009) propose an interaction protocol based on waiting profiles. An interaction protocol is a protocol that prescribes the way agents communicate, the content of the communication, and the aimed outcome of the communication. The basic idea behind the waiting profile is that terminal operators give a barge insight in the maximum waiting time until its processing is started after it has arrived. This information is provided for every possible arrival moment during a certain time period. The aimed outcome of the communication between barge and terminal operators is an appointment. An appointment – made by a barge and a terminal operator – is an agreement from two sides. The barge promises the terminal to be present at the terminal at a certain time, i.e., the latest arrival time. The terminal in turn guarantees the barge a maximum waiting time, if the barge keeps its promise. If the barge does not keep its promise and arrives later than the announced time, it has to make a new appointment. In making appointments, the barge uses the guaranteed maximum waiting times at preceding terminals to calculate the arrival time at a succeeding terminal. Starting point of the above interaction protocol is that terminals are fully cooperative in the sense that they are willing to make guaranteed agreements with barges about maximum waiting times and that they give insight in their occupation during the day. However, in practice, terminals might consider to be less cooperative, e.g., by not keeping the agreements made with barges or by providing limited insight in their occupation. The aim of this paper is to provide insight in the effect of the degree of terminal cooperativeness on the efficiency of the barge handling process. The outline of this paper is as follows. In Section 2 we provide a discussion of related literature. Section 3 describes the assumptions we make. In Section 4 we introduce the notion ‘degree of cooperativeness’ and describe the different models we use. Section 5 presents the experimental settings used in the simulation study and for the off-line benchmark. In Section 6 we discuss the results and in Section 7 we complete the paper with a discussion and conclusions.

The results of this paper show that the way terminals deal with barges, influences to a large extent the performance of these barges. In this section we provide a discussion of the results and draw some conclusions. We defined the degrees of cooperativeness along two dimensions: the information provided by terminals and the way terminals process barges (FCFS or based on appointments). Based on the experimental results we conclude that the value of the information provided by a terminal is strongly depending on the way barges are processed. To illustrate this, consider the partly cooperative results. In this case, terminals issue waiting profiles based on arrival times that were announced by barges at the time they planned a rotation. These arrival times are determined by barges based on the assumption that waiting profiles give reliable information about the maximum waiting time at a terminal. However, terminals process barges FCFS and it is therefore likely that barges arrive at any time but the announced arrival time. Moreover, in practice barges might decide to visit terminals in a different sequence, since they do not have (binding) appointments. The result is that waiting profiles become misleading, since they provide poor information about the busyness of the terminal during the day. This situation is highly undesirable. In general we conclude that if terminals process barges more or less FCFS, then barges are better off when no appointments with terminals are made. The reason why is that FCFS processing results in very efficient performance of the terminals (they always process barges if there are waiting any) and that appointments (which are not met by terminals) pretend certainty about the handling times, but in fact frustrate the rotation planning of barges. If we compare the four different decision rules we considered for the lowly cooperative case, we see that the more equally the workload of all barges is spread over the port (in case of FCFS processing), the lower the average waiting times at terminals and the better the performance of the system. Although being lowly cooperative leads to good results compared to being fully cooperative, we note that in our experimental setting we had no sea vessels and restricted opening times of terminals. These aspects make it hard to decide which terminal to visit when and increase the risk of long waiting times at terminals. Additionally, not making appointments between barge and terminal operators has several other disadvantages. First, terminals have less information about the time a barge will arrive and have therefore more uncertainty in planning their quay operations (like the stacking of containers). Second, terminals have less influence on the balancing of their workload over the day. Third, barges need to be stowed flexibly to visit terminals in different sequences. This affects the utilization of the barges. Finally, the times barges leave the port is uncertain, which makes the sailing schedules offered to their customers less reliable. These drawbacks can be solved when terminals become fully cooperative. Reliable appointments give certainty in the operations and allow for optimization of terminal and barge operations. However, full cooperativeness requires that terminals stick to the ‘rules of the game’, even when an appointment is sometimes restricting and being lowly cooperative seems to be an attractive alternative. In addition, barges do not have a clear incentive to reduce the length of their rotation (as they would have when terminals process barges FCFS), since they can use the waiting time at one terminal to visit other terminals. More terminal visits in a rotation implies more dependencies between terminals, and on average smaller call sizes per barge. This results in more idle time of the crane during mooring of the barges. Although fully cooperative might be considered as restrictive by terminals, the experimental results indicate that barges and terminals can perform really well. It is subject to discussion which degree of cooperativeness is desirable from both a terminal and a barge perspective. Low cooperativeness seems to be an attractive option, since terminals have a lot of flexibility in their operations and can deal easily with disruptions. On the other hand, full cooperativeness gives certainty in the operations and allows for balancing of the terminal workload, the alignment of quay operations with other activities, stowage optimization etcetera. We expect that this certainty is of great value for barge and terminal operators. One can imagine that in practice also a mix of degrees of cooperativeness can be found among terminals; for instance, terminals that participate in the Multi-Agent system (and are fully cooperative) and terminals that are not willing to participate. The latter terminals will cause a lot of uncertainty about the time a barge needs to be processed at those terminals, which makes it harder to make appointments with fully cooperative terminals. In this hybrid setting it is essential for barges that they make appointments such, that they can visit the less cooperative terminals in between the appointments.