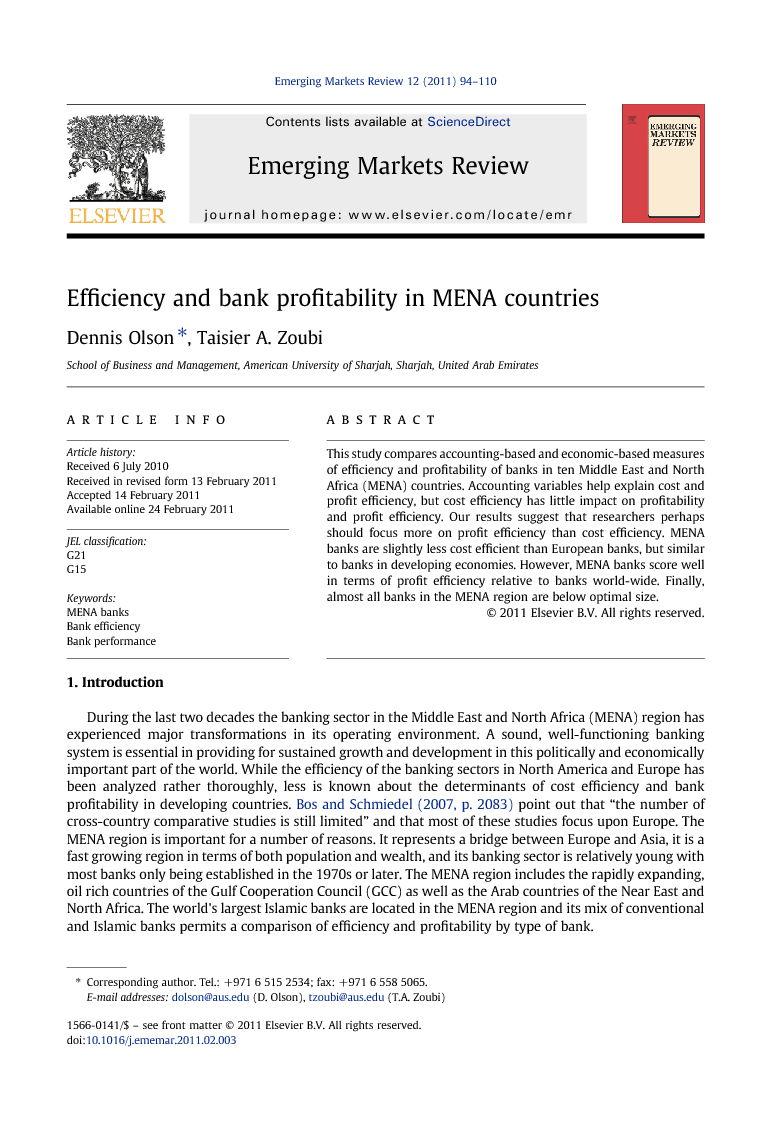 During the last two decades the banking sector in the Middle East and North Africa (MENA) region has experienced major transformations in its operating environment. A sound, well-functioning banking system is essential in providing for sustained growth and development in this politically and economically important part of the world. While the efficiency of the banking sectors in North America and Europe has been analyzed rather thoroughly, less is known about the determinants of cost efficiency and bank profitability in developing countries. Bos and Schmiedel (2007, p. 2083) point out that “the number of cross-country comparative studies is still limited” and that most of these studies focus upon Europe. The MENA region is important for a number of reasons. It represents a bridge between Europe and Asia, it is a fast growing region in terms of both population and wealth, and its banking sector is relatively young with most banks only being established in the 1970s or later. The MENA region includes the rapidly expanding, oil rich countries of the Gulf Cooperation Council (GCC) as well as the Arab countries of the Near East and North Africa. The world's largest Islamic banks are located in the MENA region and its mix of conventional and Islamic banks permits a comparison of efficiency and profitability by type of bank. Accounting-based studies of bank performance generally use comprehensive information from financial statements to identify the determinants of bank profitability, as measured by return on assets (ROA) or return on equity (ROE). Studies focusing on an individual country (Kosmidou et al., 2007 and Ben Naceur and Goaied, 2008) or a geographical region (Kwan, 2003 and Bonin et al., 2005) have examined bank-specific factors of profitability (e.g., size, revenue growth, risk, and control of expenses), while studies encompassing multiple countries (Hassan and Bashir, 2003, Valverde and Fernandez, 2007, Poghosyan, 2010 and Ben Naceur and Omran, 2011) have considered external factors (e.g., inflation, concentration, and GDP growth) in addition to a few internal factors of profitability. Economics-based research has focused on efficiency, as calculated by the distance away from some ideal frontier measured relative to the lowest cost or highest profit bank in the sample. Many studies have adopted nonparametric techniques, such as data envelopment analysis (DEA) that impose no functional form on the cost or production function, but the more prevalent approach in the economics-based literature is based on the parametric estimation of cost, production, or profit functions. Among the parametric approaches, the Aigner et al. (1977) stochastic frontier approach (SFA) or the Berger (1993) distribution free approach (DFA) are the most popular and generally provide consistent efficiency rankings among banks. Although SFA has been adopted more frequently than DFA, the primary advantage of DFA is that it makes less assumptions about the form of the error tem and the distribution error terms used to estimate cost or profit efficiency. Although the bank performance literature is generally either accounting-based or economics-based, in recent years some articles have combined aspects of both approaches. For example, Berger and Mester, 1997, Maudos et al., 2002, Hassan, 2005, Fries and Taci, 2005, Yildirim and Philippatos, 2007 and Staikouras et al., 2008 have examined the accounting-based correlates of economic efficiency measures. These studies have found that accounting based-variables, not included in the economics cost and profit functions, explain from 9% to 59% of the cost and profit efficiency differences between banks. Following this recent strand literature, the purpose of our paper is to estimate cost and profit efficiencies for banks in the MENA region and compares these results with the accounting-based determinants of bank profitability as measured by ROA and ROE. We estimate translog cost and profit functions to determine scale economies and the efficiency of individual banks in the MENA region over the period 2000–2008. We identify average bank efficiency by country, and compare the efficiency of Islamic versus conventional banks. Our approach permits a consistency check between the results of economics and accounting-based measures of bank performance. Our results have particular implications for the regulation and management of MENA banks. First, the average bank in the MENA region operates at a level below optimal size, so that bank consolidations and mergers should generally not be opposed. Second, since there is little relationship between cost efficiency and profitability or profit efficiency, we believe that economics-based studies of banking should focus more on profit efficiency rather than cost efficiency. The remainder of the paper is organized as follows. Section 2 provides a review of the literature on the determinants of profitability and bank efficiency and Section 3 describes the data. Section 4 defines the variables used to find the accounting-based determinants of profitability, while Section 5 estimates cost and profit efficiency using translog cost and profit functions. Section 6 compares accounting-based and efficiency measures for individual banks and Section 7 makes some concluding remarks.

This paper has looked at the accounting-based determinants of profitability of MENA banks and compared these results with the economics-based determinants of cost and profit efficiency over the period 2000–2008. Most MENA banks are somewhat smaller than the optimal size. Using the distribution free approach (DFA) for separating inefficiency from random error, the average bank (relative to the best practice banks in the region), operates at a cost efficiency lower than in North American banks, but in line with studies of the banking industry in many European countries and in developing economies. MENA banks are more profitable and show less discrepancy between cost and profit efficiency measures than has been found in other countries, while Islamic banks in the region are more profitable, but less cost efficient than conventional MENA banks. Possible implications of our study for bank management and regulation are as follows. Since the average bank in the MENA region is smaller than the optimal size, most bank consolidations and mergers should not be opposed by regulators. Similarly the positive correlation between bank size and accounting profitability suggests that MENA banks would be more cost and profit efficient if they were larger. Cost efficiency can be enhanced by controlling operating costs (as reflected by the inefficiency ratio in our analysis). Banks might also be able to control costs by employing optimal production plans, adopting new technologies, or reducing excess capacity through mergers. Although many variables related to profitability are outside the control of the bank manager (e.g., whether a bank is traded, percentage of government ownership, conventional versus Islamic, and inflation), our study shows that loan specialization and greater capital strength lead to higher profitability. Hence, regulators should insure that MENA banks remain highly capitalized and they should encourage banks to grant loans. Finally, we expect that the existence of substantial profit opportunities in the MENA region will encourage more foreign banks to open branches in MENA countries and that the observed profitability of Islamic banks will encourage conventional banks to expand their activities to include more Islamic products. Provided that bank regulators allow free entry, expansion of product lines, and bank mergers, we believe that MENA banks will display greater cost and profit efficiency in the future.