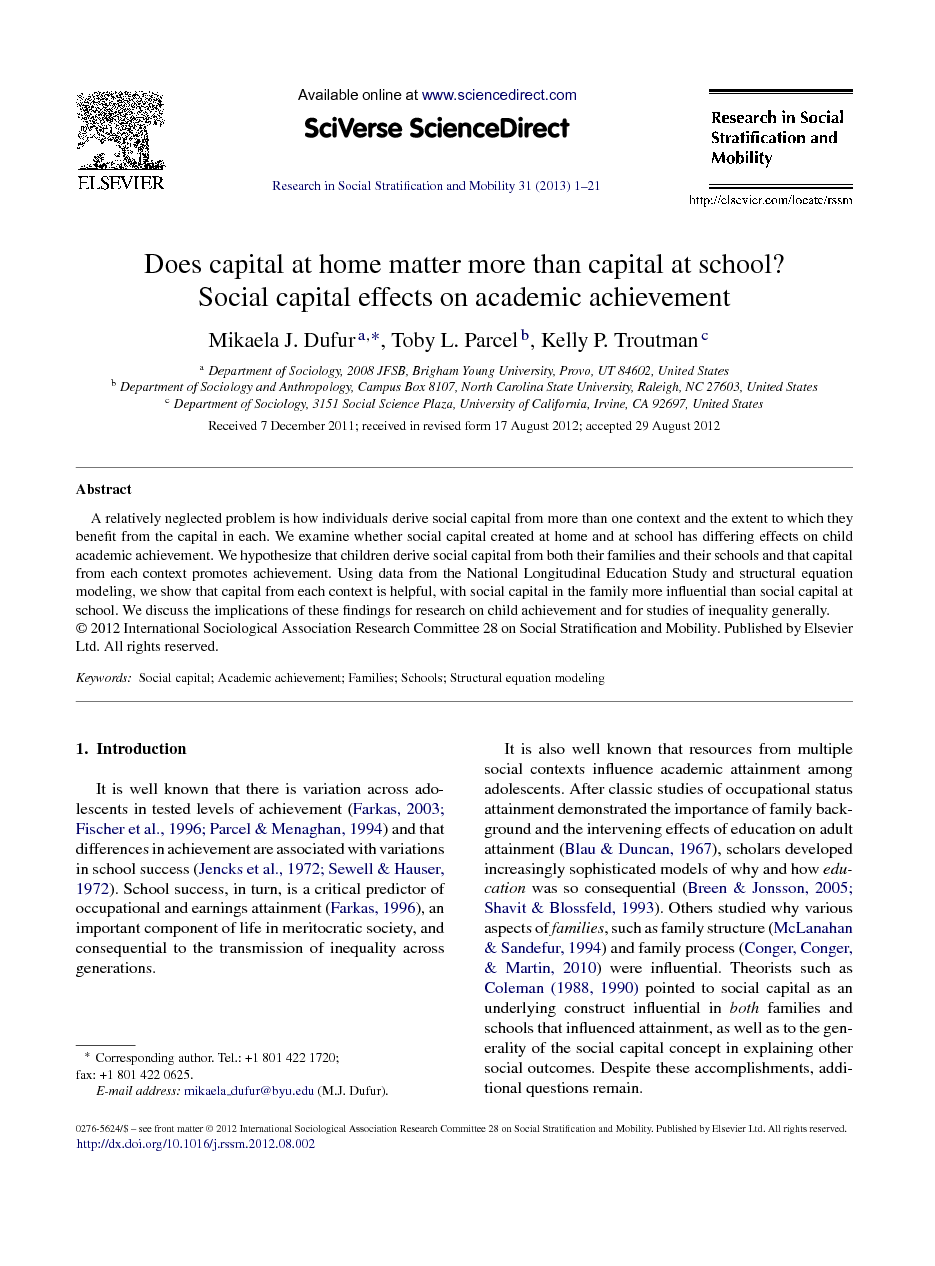 It is well known that there is variation across adolescents in tested levels of achievement (Farkas, 2003, Fischer et al., 1996 and Parcel and Menaghan, 1994) and that differences in achievement are associated with variations in school success (Jencks et al., 1972 and Sewell and Hauser, 1972). School success, in turn, is a critical predictor of occupational and earnings attainment (Farkas, 1996), an important component of life in meritocratic society, and consequential to the transmission of inequality across generations. It is also well known that resources from multiple social contexts influence academic attainment among adolescents. After classic studies of occupational status attainment demonstrated the importance of family background and the intervening effects of education on adult attainment (Blau & Duncan, 1967), scholars developed increasingly sophisticated models of why and how education was so consequential ( Breen and Jonsson, 2005 and Shavit and Blossfeld, 1993). Others studied why various aspects of families, such as family structure (McLanahan & Sandefur, 1994) and family process (Conger, Conger, & Martin, 2010) were influential. Theorists such as Coleman, 1988 and Coleman, 1990 pointed to social capital as an underlying construct influential in both families and schools that influenced attainment, as well as to the generality of the social capital concept in explaining other social outcomes. Despite these accomplishments, additional questions remain. Specifically, relatively little research explicitly addresses how family and school contexts affect the accumulation and use of social capital as it is transmitted to educational outcomes. For example, does social capital pay off regardless of where it is generated? Or is the benefit of social capital dependent on the context in which the investment is made? In addition, can social capital reflect resources in more than one context? In this paper we address these issues with a study of family and school social capital effects on adolescent academic achievement. We hypothesize that children derive social capital from their families and from their schools and that capital from each context is influential in promoting academic achievement. We demonstrate that social capital at home and social capital at school are distinct constructs. We also show that capital from each context is helpful in promoting child academic achievement. Our empirical strategies differ from previous work in allowing us to evaluate the extent to which specific measures of capital actually reflect more than one context simultaneously, as well as the overall effectiveness of capital from each context. We first review literature on social capital that identifies which aspects of families and schools may be important to study. We then review literature pointing to limitations in prior studies of social capital effects on academic achievement, followed by details of our empirical strategy and findings. We conclude by discussing how our strategies can inform questions in the study of inequality more generally by identifying how resources in other contexts, such as neighborhoods and workplaces, also differentially affect stratification outcomes.

Our goal in this paper is to investigate whether considering the context in which social capital is created and used refines our understanding of how investment in social resources affects child academic achievement. Because test scores are associated with later school success, inferences regarding where resources are most influential are important to those concerned with how inequality is transmitted across generations. We argue that social capital is not a monolith, but rather that investments in different social sites may potentially lead to different returns. Our analytic strategies help us move beyond prior research in several ways. Consistent with our first hypothesis, we demonstrate that children's social capital is site-specific. In doing so, we improve upon prior studies that were unable to attend to the context from which social capital indicators are derived. There is less support for our second hypothesis regarding social capital created jointly across contexts. Only one item, participation in extracurricular activities, acts as an indicator of social capital in both contexts. While this may suggest that children's social capital is created and used in two very distinct contexts, we note that this particular variable is indicative of shared effort between families and schools. Participation in extracurricular activities requires clear and considerable investments by school personnel, including time spent coaching, supervising, or otherwise training students. Similarly, these activities require considerable investments on the part of parents, who often have to arrange transportation, help raise funds, and chaperone events, bringing the parents into greater contact with their own children, their children's peers, and other parents and teachers. It is possible that activities or situations requiring heavy investment from two parties are best considered as being created across multiple contexts. Consistent with our third hypothesis, we also demonstrate that capital from two distinct contexts, families and schools, positively affects academic achievement. Our confirmatory factor analysis reveals the extent to which variables reflect the underlying concept of social capital, better enabling scholars to tie the specifics of social capital theory to everyday social interactions both at home and at school. As Coleman (1988) predicted, investment in the social ties that pass along information and create obligations and shared norms helps transmit human capital to the next generation. In addition, this analytic strategy allows investigators to assess the relative strength of social capital in various contexts, an approach that has value for scholars and policymakers alike. Consistent with our fourth hypothesis, we found that family social capital exerts stronger effects on academic achievement than does school social capital, a finding that clarifies ideas about sites of social investment and may aid practitioners in crafting intervention policies that focus resources where they will have the greatest benefit. These findings highlight the importance of the social capital children experience in the home as critical to promoting child development. In addition, we note that a comparable analysis of child behavior problems also demonstrated that families exerted stronger effects than schools; hence, the evidence appears to be accumulating across these two dependent variables that the location in which social capital is created matters in terms of promoting positive child development (Dufur et al., 2008).