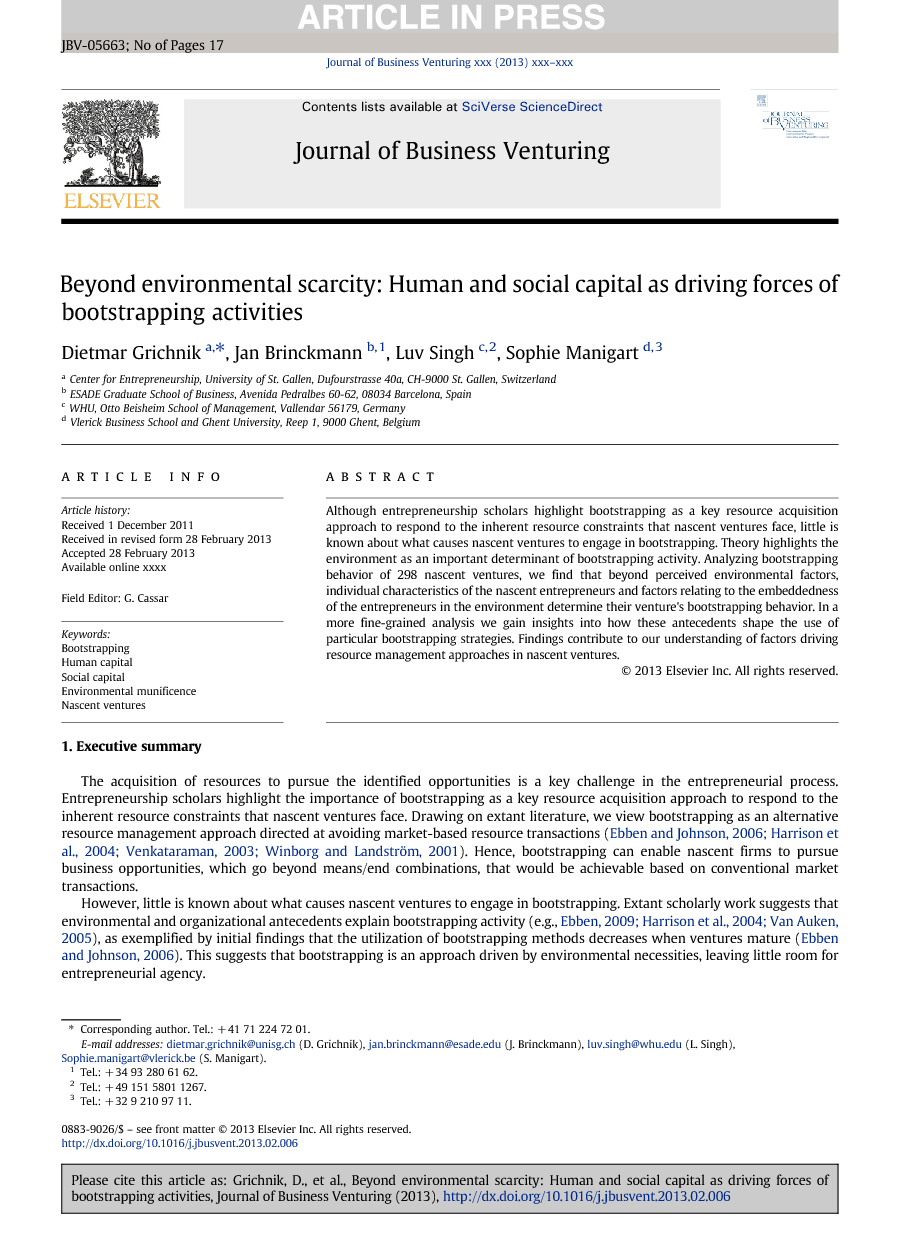 The entrepreneurship and strategic management literature stipulates that resource management is a key factor for initial survival and subsequent progress of organizations, especially in a context of environmental dynamism and resource scarcity (e.g., Brush et al., 2001 and Sirmon and Hitt, 2003). Purposeful resource management can optimize the way that resources are acquired, integrated, and deployed to cope with resource dependencies in a unique manner (Pfeffer and Salancik, 1978 and Sirmon et al., 2007). Nascent firms in the process of establishing new means/end relationships in the marketplace are inherently confronted with a dynamic and resource scarce business context (Davidsson and Honig, 2003). During the turbulent phase of organizational emergence, most nascent firms have to overcome the initial lack of substantial managerial, financial, organizational, and physical resources, which is usually supplemented by the burden of lacking legitimacy in the eyes of important resource providers (Stinchcombe, 1965 and Wiklund et al., 2010). These circumstances limit the bargaining power of nascent firms, resulting in unfavorable resource dependencies (Ebben and Johnson, 2006, Packalen, 2007, Pfeffer and Salancik, 1978 and Stinchcombe, 1965). Therefore, confronted with an unfavorable point of departure for competing on the resource markets, nascent firms must attract, develop, and utilize – that is, manage – their resources in purposeful ways (e.g., Bhidé, 1992 and Brush et al., 2001). Despite the immediate relevance of resource management for the survival and subsequent growth of nascent ventures, little is known about adequate resource management approaches in this context. Nonetheless, the entrepreneurship literature introduced the concept of bootstrapping as an approach to mitigate resource dependencies (e.g., Freear et al., 1995 and Winborg and Landström, 2001). Reconciling the multitude of prior descriptions of the bootstrapping phenomenon, we view bootstrapping as an alternative resource management approach directed at avoiding market-based resource transactions (Ebben and Johnson, 2006, Harrison et al., 2004, Venkataraman, 2003 and Winborg and Landström, 2001). Hence, bootstrapping can enable nascent firms to pursue business opportunities, which go beyond means/end combinations, that would be achievable based on conventional market transactions. Main contributions in the bootstrapping literature relate to establishing typologies for bootstrapping activities (Freear et al., 1995 and Winborg and Landström, 2001). Some studies created an initial understanding concerning how the utilization of different bootstrapping methods changes over the organization's life cycle (Ebben and Johnson, 2006) and how it relates to a venture's growth (Vanacker et al., 2011). Extant scholarly work suggests that environmental and organizational antecedents explain bootstrapping activity (e.g., Ebben, 2009, Harrison et al., 2004 and Van Auken, 2005), as exemplified by initial findings that the utilization of bootstrapping methods decreases when ventures mature (Ebben and Johnson, 2006). This suggests that bootstrapping is an approach driven by environmental necessities, leaving little room for entrepreneurial agency. However, strategy focused entrepreneurship literature suggests that the entrepreneurs have an important role in determining a nascent firm's trajectory (Edelman and Yli-Renko, 2010 and Haynie et al., 2010). Hence, questions arise whether firms' bootstrapping activities are mere responses to environmental demands or if bootstrapping is used beyond environmental conditions as a conscious or unconscious, yet characteristic, approach that reflects the background of the founders. With the current study, we aim to contribute to the scholarly understanding of bootstrapping by scrutinizing how the founders' backgrounds shape bootstrapping activities in nascent firms. Therefore, this analysis follows prominent literature that sees nascent firms as extensions of their founders and entrepreneurs as the driving force of strategic decisions and actions in their firms (Chandler and Hanks, 1994). Our analysis offers three main contributions to the literature. First, we strive to contribute to a better understanding of the bootstrapping phenomenon. Theoretical arguments refer to bootstrapping as an innovative resource management activity in the earliest phases of firm development, but empirical analyses predominantly analyze bootstrapping in young or small incumbent firms. However, resource scarcity, resource dependence, and unfavorable terms of market resource exchange likely are most pronounced when the firm is not yet existent, and the fledging entrepreneur is struggling to establish the firm. Therefore, this study focuses specifically on bootstrapping activities deployed in nascent firms. By analyzing bootstrapping in nascent ventures, we seek a better understanding of associated resource management behaviors and its antecedents. By comparing different bootstrapping conceptions and measurements in diverging contexts, we further aim to establish a core understanding of the bootstrapping phenomenon and to depict its contextual dependence. Second, we evaluate specific environmental antecedents that affect bootstrapping behavior in the nascent venture context. Following resource dependency theory, we investigate the effects of the founders' perceived environmental munificence and their social capital. In particular, we add to extant literature by comparing the effects of strong and weak ties of entrepreneurs on bootstrapping behavior, which allows us to identify the type of resource access or lack thereof that thrusts nascent ventures into bootstrapping. In addition, we further explore whether the environmental munificence, as perceived by the founders, or rather more objective regional economic conditions affect the bootstrapping activities of the nascent firms. This analysis contributes to prior literature that found that the regional context is a salient predictor of bootstrapping behavior (Winborg and Landström, 2001). Third, while controlling for various environmental conditions and the founders' access to resources in their environment, we analyze the importance that founders' human capital plays in determining bootstrapping behavior. By scrutinizing the effects of the founders' background – such as their education and work experience – on their bootstrapping behavior, we can infer resulting individual cognitions4 that determine unique resource management approaches and subsequently shape the trajectory of the emerging firms (Boeker, 1987). Our research contributes to this line of research by fostering our understanding of entrepreneurial agency as a way to address resource constraints and achieve outcomes that might not be attainable using more traditional resource management approaches. Entrepreneurship theorists underline that the central function which entrepreneurs fulfill is in introducing new means/end combinations in the market place (Schumpeter, 1934). Our analysis depicts specific mechanisms of how entrepreneurs achieve ends with means that would not be achievable using conventional approaches. In other words, while the innovative, entrepreneurial resource management approach can be an outcome of entrepreneurial agency, our research also indicates that certain founders apply this approach in the process of developing new offerings.