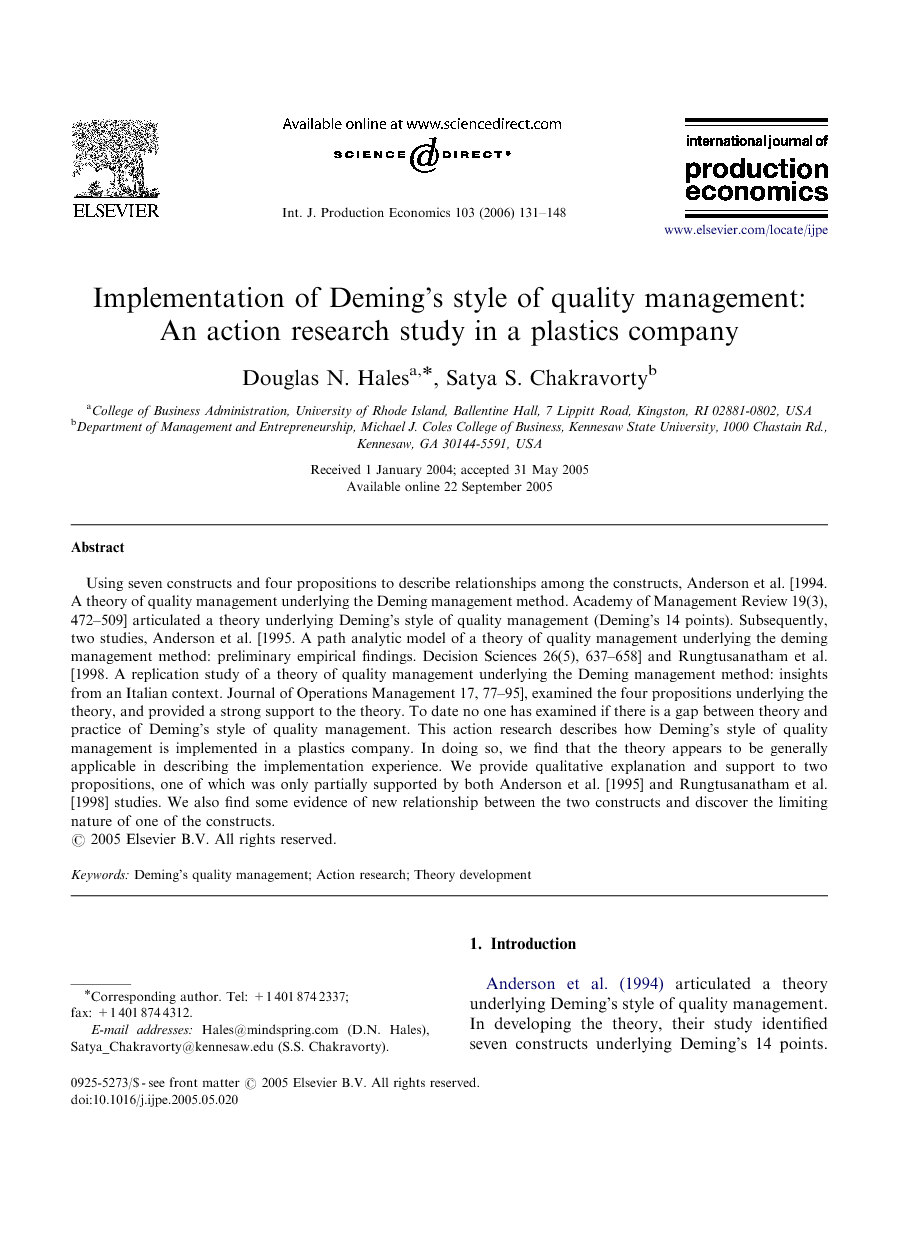 Anderson et al. (1994) articulated a theory underlying Deming's style of quality management. In developing the theory, their study identified seven constructs underlying Deming's 14 points. The constructs are: Visionary Leadership, Internal and External Cooperation, Learning, Process Management, Continuous Improvement, Employee Fulfillment, and Customer Service. Using the constructs, they specified four propositions to show the relationships among the constructs. To explain the effectiveness arising from adopting Deming's approach, Anderson et al. (1994, pp. 479–480) succinctly stated the essence of the propositions as: … leadership efforts toward the simultaneous creation of a cooperative and learning organization to facilitate the implementation of process-management practices, which, when implemented, support customer satisfaction and organizational survival through sustained employee fulfillment and continuous improvement of processes, products, and services. Continuing the theory development process, two studies, Anderson et al. (1995) and Rungtusanatham et al. (1998), examined the four propositions and provided strong support to the theory underlying the Deming's style of quality management. To date, no one has examined a possible gap between theory and practice of Deming's style of quality management. In other words, the difference in what this model describes and what actually happens when Deming's style of quality management is implemented in a real world setting. The purpose of this research is to describe how Deming's style of quality management is implemented in a plastics company. In doing so, we find that the theory is generally applicable in describing the implementation experience. We provide qualitative explanation and support to two propositions, one of which was only partially supported by both Anderson et al. (1995) and Rungtusanatham et al. (1998) studies. We also find some evidence of new relationship between Internal and External Cooperation and Learning constructs, and discover the limiting nature of the Internal and External Cooperation constructs. It is important to note that this research is not a formal test of the theory; however, the implementation experience provides an empirical basis to further the theory development process started by Anderson et al. (1994). In the next section, we present Deming's 14 points and the seven constructs of the theory underlying the14 points, including four propositions describing the relationships among the constructs. In Section 3, we discuss the methodology of the study. In Section 4, we organize our implementation experience around two of the four propositions. Lastly, we provide conclusions from our implementation experience and discuss implications for the theory including direction for future research.