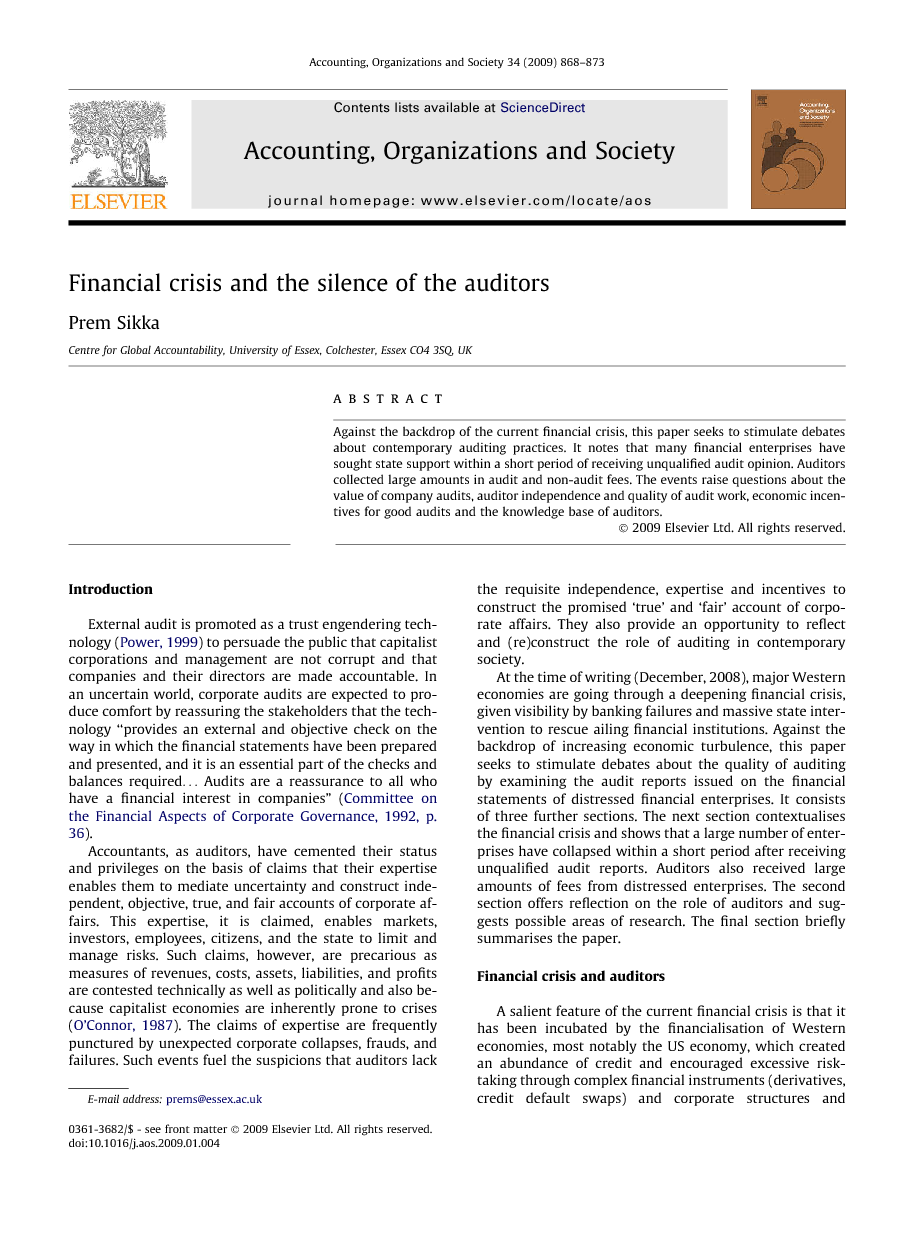 Against the backdrop of the current financial crisis, this paper seeks to stimulate debates about contemporary auditing practices. It notes that many financial enterprises have sought state support within a short period of receiving unqualified audit opinion. Auditors collected large amounts in audit and non-audit fees. The events raise questions about the value of company audits, auditor independence and quality of audit work, economic incentives for good audits and the knowledge base of auditors.

External audit is promoted as a trust engendering technology (Power, 1999) to persuade the public that capitalist corporations and management are not corrupt and that companies and their directors are made accountable. In an uncertain world, corporate audits are expected to produce comfort by reassuring the stakeholders that the technology “provides an external and objective check on the way in which the financial statements have been prepared and presented, and it is an essential part of the checks and balances required… Audits are a reassurance to all who have a financial interest in companies” (Committee on the Financial Aspects of Corporate Governance, 1992, p. 36). Accountants, as auditors, have cemented their status and privileges on the basis of claims that their expertise enables them to mediate uncertainty and construct independent, objective, true, and fair accounts of corporate affairs. This expertise, it is claimed, enables markets, investors, employees, citizens, and the state to limit and manage risks. Such claims, however, are precarious as measures of revenues, costs, assets, liabilities, and profits are contested technically as well as politically and also because capitalist economies are inherently prone to crises (O’Connor, 1987). The claims of expertise are frequently punctured by unexpected corporate collapses, frauds, and failures. Such events fuel the suspicions that auditors lack the requisite independence, expertise and incentives to construct the promised ‘true’ and ‘fair’ account of corporate affairs. They also provide an opportunity to reflect and (re)construct the role of auditing in contemporary society. At the time of writing (December, 2008), major Western economies are going through a deepening financial crisis, given visibility by banking failures and massive state intervention to rescue ailing financial institutions. Against the backdrop of increasing economic turbulence, this paper seeks to stimulate debates about the quality of auditing by examining the audit reports issued on the financial statements of distressed financial enterprises. It consists of three further sections. The next section contextualises the financial crisis and shows that a large number of enterprises have collapsed within a short period after receiving unqualified audit reports. Auditors also received large amounts of fees from distressed enterprises. The second section offers reflection on the role of auditors and suggests possible areas of research. The final section briefly summarises the paper.

The deepening financial crisis poses questions about the role and value of external audits. Markets do not seem to have been assured by unqualified audit opinions and many financial institutions either collapsed, or had to be bailed out within a short period of receiving unqualified audit opinions. The events fuel the suspicions that auditors lack the claimed expertise to render an independent and objective account of corporate affairs. The episodes encourage reflection on the role, value and independence of auditors. They also present opportunities for research into regulation, independence, politics, production and knowledge base of auditors. An independent inquiry into the role of auditing, especially at financial institutions, would help to highlight the shortcomings of the current practices. A UK legislator has accused accounting firms of delivering “dodgy auditing” (Hansard, House of Commons Debates, 13 October, 2008, col. 553) and demanded “a full scale inquiry into the conduct of the audit work that signed off the banks’ accounts” (Accountancy Age,13 23 October, 2008). Unsurprisingly, such calls are resisted by major auditing firms (Accountancy Age,14 13 November, 2008) though they are using the crisis to demand further liability concessions15 and increase their profits. The auditing regulators have shown little interest in exploring the issues raised in this paper and are content to claim that “auditing has had a good crisis”,16 i.e., it has received little sustained press scrutiny. The auditing industry has mediated previous crises by revising auditing standards and codes of ethics (Sikka & Willmott, 1995) and the early signs are that the same strategies will be deployed again. For example, without examining the processes associated with the production of audits, changes in capitalism, or limits of auditing, the US Public Company Accounting Oversight Board (PCAOB)17 has issued seven new draft auditing standards.18 Such myopic policies are unlikely to reinvigorate auditing.