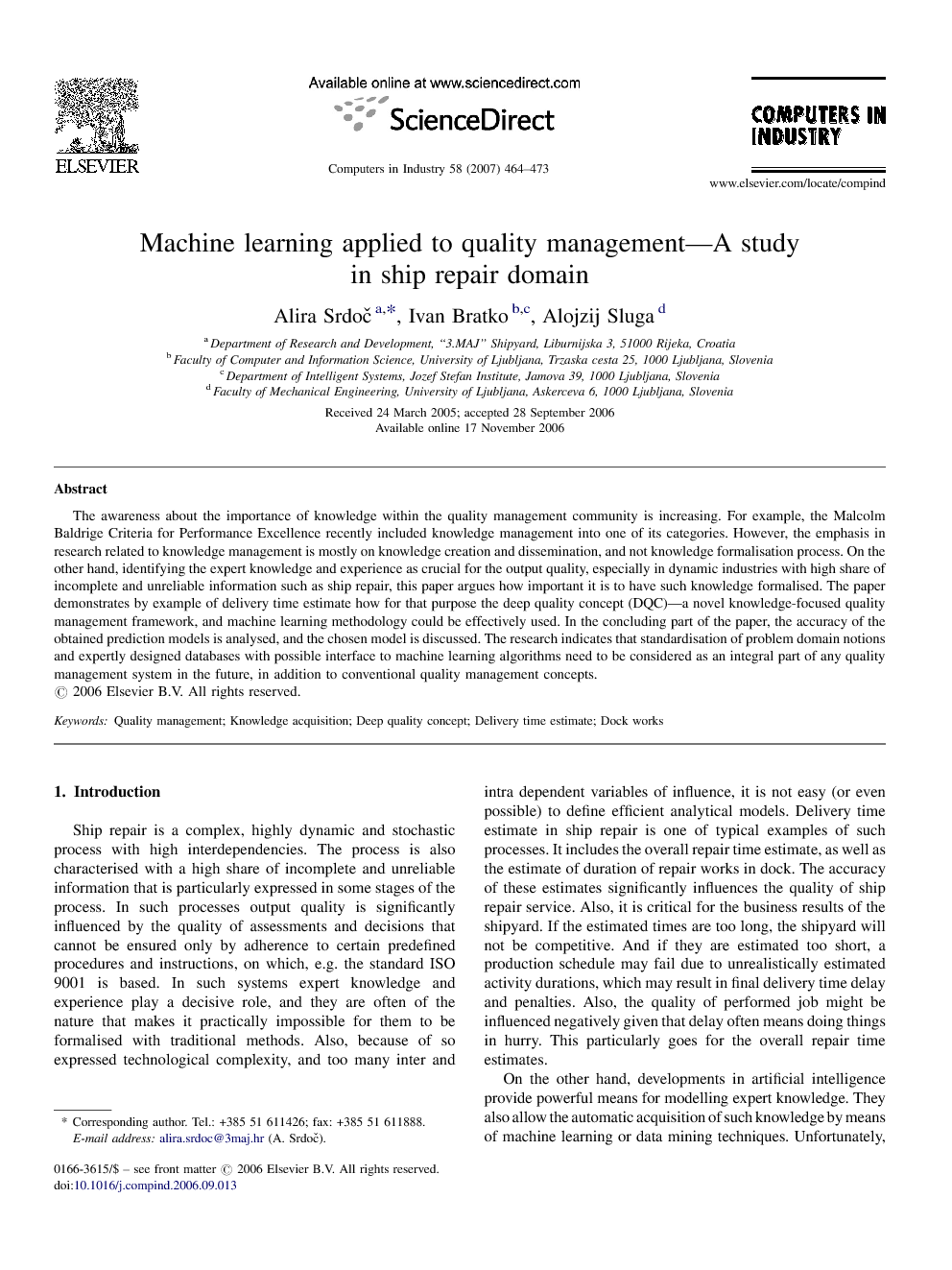 The awareness about the importance of knowledge within the quality management community is increasing. For example, the Malcolm Baldrige Criteria for Performance Excellence recently included knowledge management into one of its categories. However, the emphasis in research related to knowledge management is mostly on knowledge creation and dissemination, and not knowledge formalisation process. On the other hand, identifying the expert knowledge and experience as crucial for the output quality, especially in dynamic industries with high share of incomplete and unreliable information such as ship repair, this paper argues how important it is to have such knowledge formalised. The paper demonstrates by example of delivery time estimate how for that purpose the deep quality concept (DQC)—a novel knowledge-focused quality management framework, and machine learning methodology could be effectively used. In the concluding part of the paper, the accuracy of the obtained prediction models is analysed, and the chosen model is discussed. The research indicates that standardisation of problem domain notions and expertly designed databases with possible interface to machine learning algorithms need to be considered as an integral part of any quality management system in the future, in addition to conventional quality management concepts.

Increasingly, differences in a firm's performance are attributed to tacit knowledge (e.g. [27] and [28]). According to Simon [29], the reason why experts on a given subject can solve a problem more readily than novices is that the experts have in mind a pattern born on experience, which they can overlay on a particular problem and use to quickly detect a solution. On the other hand, the uncertainty associated with humans increases the need for knowledge formalisation. Rarity of real experts increases such need too. For example, in the examined shipyard after one expert was retired, only one capable of making reliable estimates on the problem explored remained. Consequently, the reliability of quality as well as of business systems, among others, lies in formalising as many as possible of patterns born on experience. In this paper an attempt to formalise one such pattern from the ship repair database is presented. The works required on the enquiries received by the shipyard have been analysed, and the related ship repair data model was created. The methodology of learning from examples was employed, and several models were induced eliciting and representing the implicit knowledge from the database. Finally, the model tree directly usable for estimating the possible repair time was chosen. The experiments confirmed that total quantity of steel within the renewal of steel on shell plating, and shell plating treatment are the most important attributes, appearing in all generated models. On the other hand, HP washing surface revealed as a more informative parameter than it is usually thought. The greatest improvements in results accuracy on unseen cases evaluated by 10-fold cross-validation were obtained using different learning algorithms. On the other hand, varying the datasets influenced the achieved performances the least. That clearly confirmed Witten and Frank's [19] thesis that in many practical situations perhaps the overwhelming majority of attributes are irrelevant or redundant. However, their statement about negative effect of irrelevant attributes on most machine learning schemes was not confirmed in this application—the results remain stable regardless of the discarded attributes, particularly when accuracy was evaluated on unseen cases. On the training data, these results were more dependent on the dataset used. The experiments also demonstrated that machine learning methods can offer an advantage over approaches based on linear and network analysis that are usually employed for the time estimate problem in shipyards, such as, e.g. Gant charts or activity networks, because they do not need any prior assumptions or knowledge about the relationships between the variables. Also, of 21 attributes used for learning, the machine-learning algorithm identified model with as few as seven attributes in the chosen tree. The comparison of the induced model predictions with the expert estimates, and analysis of the instances with the greatest deviation showed that such inconsistencies do not always have to indicate bad performance of the induced learner. They could indicate inconsistency in human reasoning, or in data available. In this study it is demonstrated how data mining could reveal such inconsistencies. For this reason, the checking of the results obtained using data mining techniques has to be always addressed in two directions—i.e. in (1) direction of checking accuracy of the learner, and (2) in checking consistency of predictions used for learning. Once the input data model was created and data standardised and cleansed, the estimate structures were obtained relatively quickly, although the process was not trivial, and required a high share of domain modelling knowledge and reasoning. In case of additional records on new projects, such models can be improved, of course, when estimating presumptions are not significantly changed. On the other hand, at least 10–15 years of experience are needed for graduated engineer or talented technician to be able to give reliable estimates. This includes supervised work with the experienced mentor. Inaccuracies of predictions of insufficiently experienced human predictors could exceed 30, and sometimes even 50% or higher. For example, in ship repair community it is well known the case for which difficulties in accurate delivery time estimate and tons of steel needed caused serious problems to one of renowned ship repair yards in Croatia. The fact that the shipyard has already had the standard ISO 9001 certificate did not prevent the final disaster. This is also consistent with Massow and Siksne-Pedersen [30] statement that shipbuilding as an extremely complex process requires special methods and tools for order processing. How overconfidence in forecasts based on expert judgement can be risky is also discussed in Armstrong [31]. In the handbook he edited, an overview of principles of forecasting, as well as methods of reducing the impact of inconsistency and bias in judgemental forecasting are also described. Many of the concepts discussed, such as careful identification of the most important causal forces (attributes in this case study), accurate records, use of models—especially computerised models, are also included in the DQC approach, and employed in this study. Of course, all these do not mean that conventional quality management principles have to be put apart. As shown in [4], it only means that all these concepts, as well as other concepts relevant for quality management that are still to be identified, need to be re-validated and put together, leading to a new, more sophisticated and complete quality management philosophy. The quality management community, as well as quality standardisation and award bodies need to recognise that need. The criteria for knowledge formalisation are stated in [4]. As it is suggested, besides now already established functions like quality managers and engineers, in designing, development and maintenance of quality systems knowledge engineers should be anticipated as well.