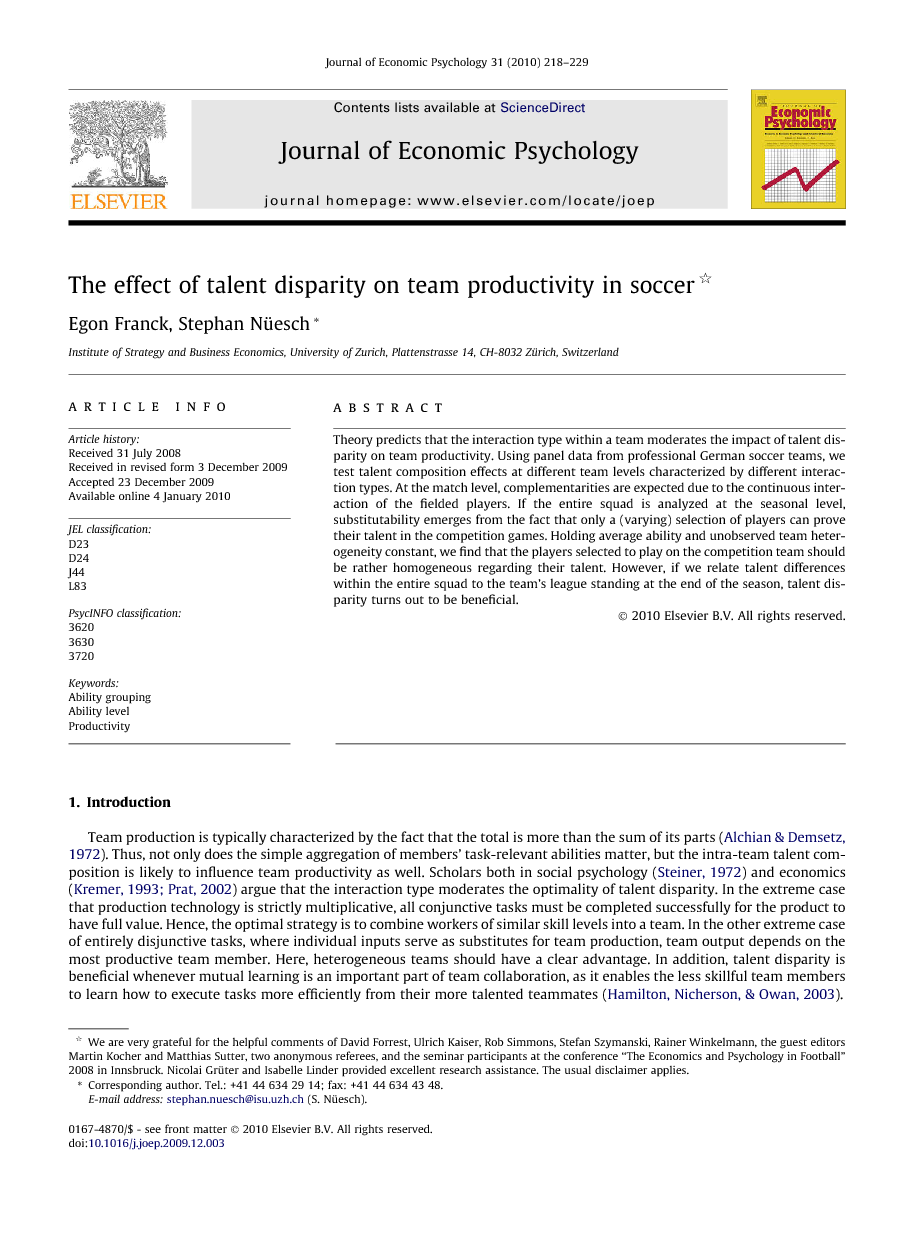 Theory predicts that the interaction type within a team moderates the impact of talent disparity on team productivity. Using panel data from professional German soccer teams, we test talent composition effects at different team levels characterized by different interaction types. At the match level, complementarities are expected due to the continuous interaction of the fielded players. If the entire squad is analyzed at the seasonal level, substitutability emerges from the fact that only a (varying) selection of players can prove their talent in the competition games. Holding average ability and unobserved team heterogeneity constant, we find that the players selected to play on the competition team should be rather homogeneous regarding their talent. However, if we relate talent differences within the entire squad to the team’s league standing at the end of the season, talent disparity turns out to be beneficial.

Team production is typically characterized by the fact that the total is more than the sum of its parts (Alchian & Demsetz, 1972). Thus, not only does the simple aggregation of members’ task-relevant abilities matter, but the intra-team talent composition is likely to influence team productivity as well. Scholars both in social psychology (Steiner, 1972) and economics (Kremer, 1993 and Prat, 2002) argue that the interaction type moderates the optimality of talent disparity. In the extreme case that production technology is strictly multiplicative, all conjunctive tasks must be completed successfully for the product to have full value. Hence, the optimal strategy is to combine workers of similar skill levels into a team. In the other extreme case of entirely disjunctive tasks, where individual inputs serve as substitutes for team production, team output depends on the most productive team member. Here, heterogeneous teams should have a clear advantage. In addition, talent disparity is beneficial whenever mutual learning is an important part of team collaboration, as it enables the less skillful team members to learn how to execute tasks more efficiently from their more talented teammates (Hamilton, Nicherson, & Owan, 2003). This paper empirically tests the effect of talent disparity on team productivity in a setting in which different interaction types are expected on different team levels within the same overall context, namely professional soccer. At the match level, only a (varying) selection of players competes in the single games that make up the championship race. The interaction type within the competition team is likely to be conjunctive: the team’s outcome depends on the complementary skills and on the continuous interaction of all fielded players performing up to some standard. If the entire team is analyzed at a seasonal level, a clearly substitutive relationship between the reserve and the fielded players is introduced. The different team levels in soccer also represent different stages of team production with unequal importance of mutual learning: the preparatory stage and the competition stage. Whereas at the preparatory stage all players of the squad are involved in an ongoing process of exercising and training, only winning matters at the competition stage. Using extensive panel data from German soccer teams, we proceed in two steps. On the one hand, we only analyze the fielded players and relate the talent composition of the competition team to the likelihood of winning the game. On the other hand, we examine the influence of talent disparity of the entire squad in a given season on the team’s (inverted) league standing at the end of the season as the ultimate measure of long-term team effectiveness. In this paper, we use productivity data to proxy a player’s ability. Individual productivity, however, is affected by inborn talent as well as time-varying aspects, like physical fitness or injuries. Since we assume that player inputs combine in a non-additive manner to produce the team’s output, productivity is also influenced by the playing ability of the other teammates. We therefore define a player’s talent by his permanent productivity, purged of possible intra-team spillover effects. First, we compute individual productivity as a weighted sum of various detailed performance statistics that affect winning. Then we model individual productivity as a function of player fixed effects, reflecting the unobserved talent of a player, of the average productivity of the rest of the team to incorporate intra-team spillovers, and of an idiosyncratic error term that captures unexplained productivity variation beyond playing ability and spillovers. The fixed effects obtained by fitting this model serve as talent proxies. As a second approach to proxy individual talent, we rely on expert evaluations. Using match-level data from all games in the German soccer league Bundesliga over a period of six seasons (i.e. 1836 games), we find evidence that homogeneous competition teams are more likely to win a game than heterogeneous teams, all else being equal. Talent disparity within the competition team decreases sportive performance. The empirical results of the second model including all team members at the seasonal level confirm that talent disparity improves a team’s standing in the championship race, holding average playing ability and other confounding factors constant. Hence, although teamwork is usually characterized by complementarities – otherwise, team output would be less, not more, than the sum of the individual contributions – talent disparity may still be beneficial when necessary substitutes and the training activities are taken into account. The remainder of this paper is structured as follows: Section 2 lays the theoretical foundations and presents related empirical papers. Subsequently, we explain team production in professional soccer and frame our hypotheses. In Section 4, we test our hypotheses. First, we explain how individual talent is measured. Then, the main features of our data, the estimation approaches and the results are illustrated. The last section presents the conclusions and general implications.

This paper analyzes the relationship between talent disparity and team productivity. Using panel data from professional soccer, the results show that talent disparity of the competition team decreases the likelihood of winning the game, whereas talent disparity of the entire squad improves the team’s final standing in the championship race, ceteris paribus. Our findings confirm the moderating influence of the interaction type on the relationship between talent disparity and team performance. Due to the high interaction in soccer, player inputs of the fielded players can be considered as complements. Analyzing the entire squad, the complementarities among the players on the pitch are supplemented by the clearly substitutive relationship between reserve players and fielded players. In addition, our results are consistent with explanations emphasizing the varying importance of mutual learning at the two stages of team production. Whereas continuous improvements of technical and tactical abilities play an important role at the preparatory stage, only winning matters at the competition stage. The main goal of this paper was to advance the knowledge on team production in soccer by applying theories and concepts from economics and psychology to soccer teams and by empirically testing their predictions. The generalizability of our findings to other contexts of team production raises the well-known concerns about external validity, as the same properties that make the sports context an advantageous area of research – accurate performance measures, a clear and simple institutional setting – also limit the transfer of results to other areas lacking these properties. However, on a rather abstract level of analysis, some general implications and wider lessons can be drawn nevertheless. What are these lessons? First, before making any judgments about the advantage or disadvantage of talent disparity within teams, it is crucial to select an appropriate team definition. Our study suggests that the more broadly a team is defined, the more likely it is that talent disparity will turn out to be beneficial. Although in professional soccer the two team levels and the substitutive relationship between fielded and reserve players are rather clear, work teams in the business world also act in institutional settings that may affect the type of interaction involved in team production. Critical team members may, for example, have predetermined substitutes in case of vacations or illness. Support teams, which intervene in the case of a breakdown in standard operations, are common in many production processes, for example, in automobile assembly. Obviously the team definition matters as it determines the inclusion or exclusion of substitutive relationships. Second, this paper suggests securing sufficient talent diversity whenever learning is important. As the learning cycles are usually very short-lived during the production phase, organizations often set up special education and training programs to develop their workers. In analogy to the training activities in professional soccer, it may be essential to have outstanding senior team members from whom newcomers can learn in these preparatory stages of team production. Overall, our findings may deliver additional insights for many work environments in which a work team is embedded in a wider institutional setting that is likely to introduce manifold interdependencies.