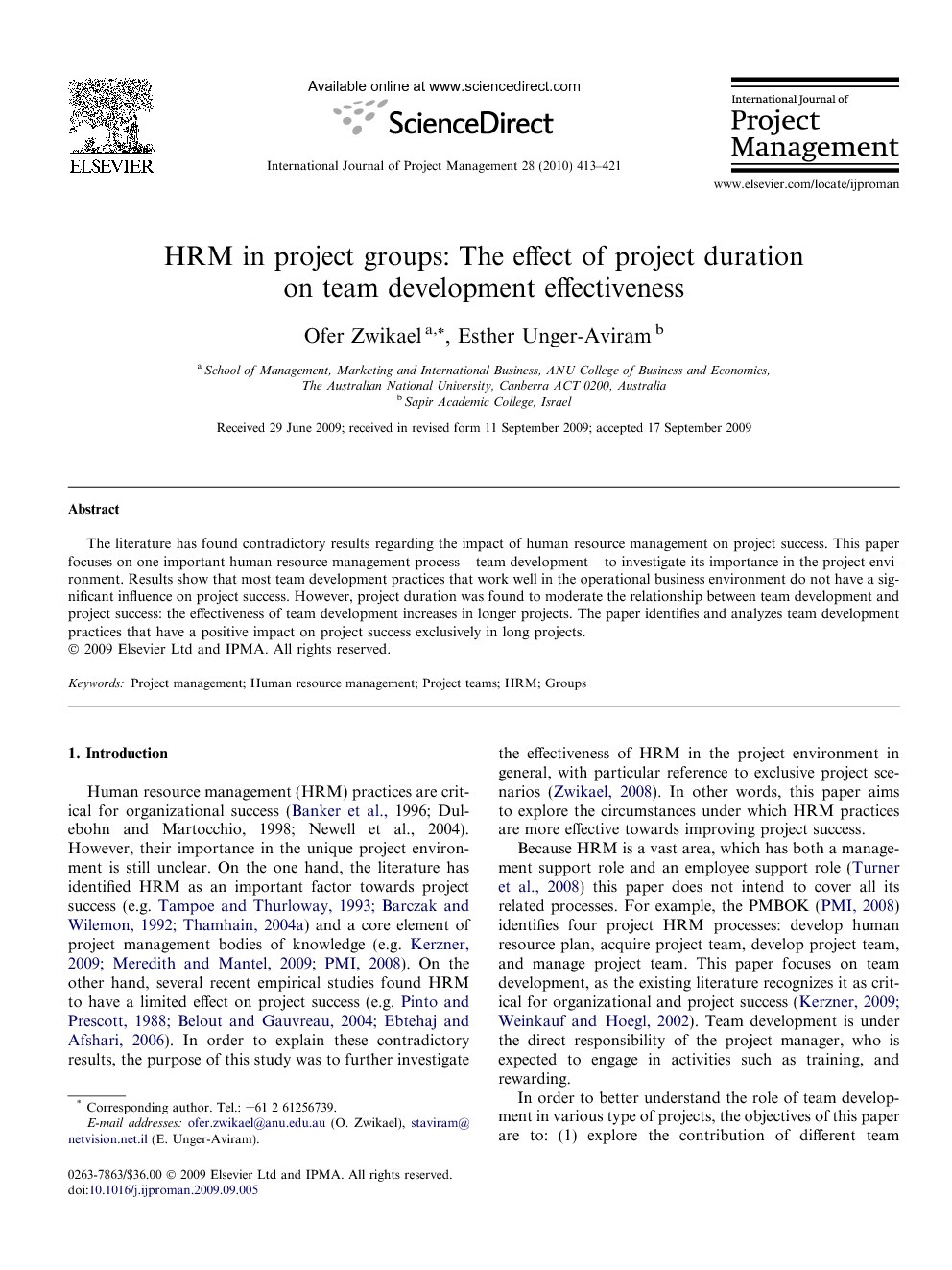 Human resource management (HRM) practices are critical for organizational success (Banker et al., 1996, Dulebohn and Martocchio, 1998 and Newell et al., 2004). However, their importance in the unique project environment is still unclear. On the one hand, the literature has identified HRM as an important factor towards project success (e.g. Tampoe and Thurloway, 1993, Barczak and Wilemon, 1992 and Thamhain, 2004a) and a core element of project management bodies of knowledge (e.g. Kerzner, 2009, Meredith and Mantel, 2009 and PMI, 2008). On the other hand, several recent empirical studies found HRM to have a limited effect on project success (e.g. Pinto and Prescott, 1988, Belout and Gauvreau, 2004 and Ebtehaj and Afshari, 2006). In order to explain these contradictory results, the purpose of this study was to further investigate the effectiveness of HRM in the project environment in general, with particular reference to exclusive project scenarios (Zwikael, 2008). In other words, this paper aims to explore the circumstances under which HRM practices are more effective towards improving project success. Because HRM is a vast area, which has both a management support role and an employee support role (Turner et al., 2008) this paper does not intend to cover all its related processes. For example, the PMBOK (PMI, 2008) identifies four project HRM processes: develop human resource plan, acquire project team, develop project team, and manage project team. This paper focuses on team development, as the existing literature recognizes it as critical for organizational and project success (Kerzner, 2009 and Weinkauf and Hoegl, 2002). Team development is under the direct responsibility of the project manager, who is expected to engage in activities such as training, and rewarding. In order to better understand the role of team development in various type of projects, the objectives of this paper are to: (1) explore the contribution of different team development practices to project success; (2) identify those team development practices that have the greatest influence on project success; and (3) investigate potential moderating variables that may influence the relationship between team development and project success. As a result, this paper aims at improving the knowledge on team development effectiveness in general and across different project scenarios in particular. The following sections review the relevant literature and present the research model, hypotheses, results, implications, and contribution of this study to theory.

The initial motivation for this study was to further explore the contradictory results that appear in the literature regarding the impact of project team development on project success. This study developed a model that specifies the effect of team development practices on project success. This basic model indicates that team development has no significant impact on project success. These findings are aligned with some other studies (e.g. Ebtehaj and Afshari, 2006 and Belout and Gauvreau, 2004). Common explanations for these results include Lack of project manager authority, limited team member availability, heterogeneous teams, late project manager assignment, and lack of proper training (Kerzner, 2009, Zwikael and Globerson, 2004, Huemann et al., 2007, Kavadias and Loch, 2003, Globerson and Zwikael, 2002, Foti, 2005 and Meredith and Mantel, 2009). However, this study also found that project duration moderates the relationship between team development and project success. Specifically, we found that ‘pay and reward’ and ‘coordination’ team development areas have a positive impact on project success only in long projects. According to the sample of this study, longer projects are those lasting more than a year. In shorter projects, the effectiveness of team development practices may not be worth the time and resources invested in them. As a result, project managers may insist on having the resources to reward team members in long-term projects, where the effect of a reward on behavior is noticeable. The inclusion of project duration as a moderating variable resulted with stronger results, as is witnessed with a high R squared. These results are particularly strong, given that the use of objective outcome measures (time and cost overrun) is known to produce lower results than subjective measures, and that several technical factors excluded from our models are strongly predictive of capital project outcomes (Nemes and Lukas, 1996). This study can partly explain the inconsistency found in the literature regarding the effectiveness of team development in projects. Indeed, it shows that team development does not fit all projects in the same manner. According to our results, the reason for this may be differences across projects, as can be noticed by their different durations. As a result, we suggest that the amount of effort that a project manager should put in team development depends on the unique nature of the project in hand.