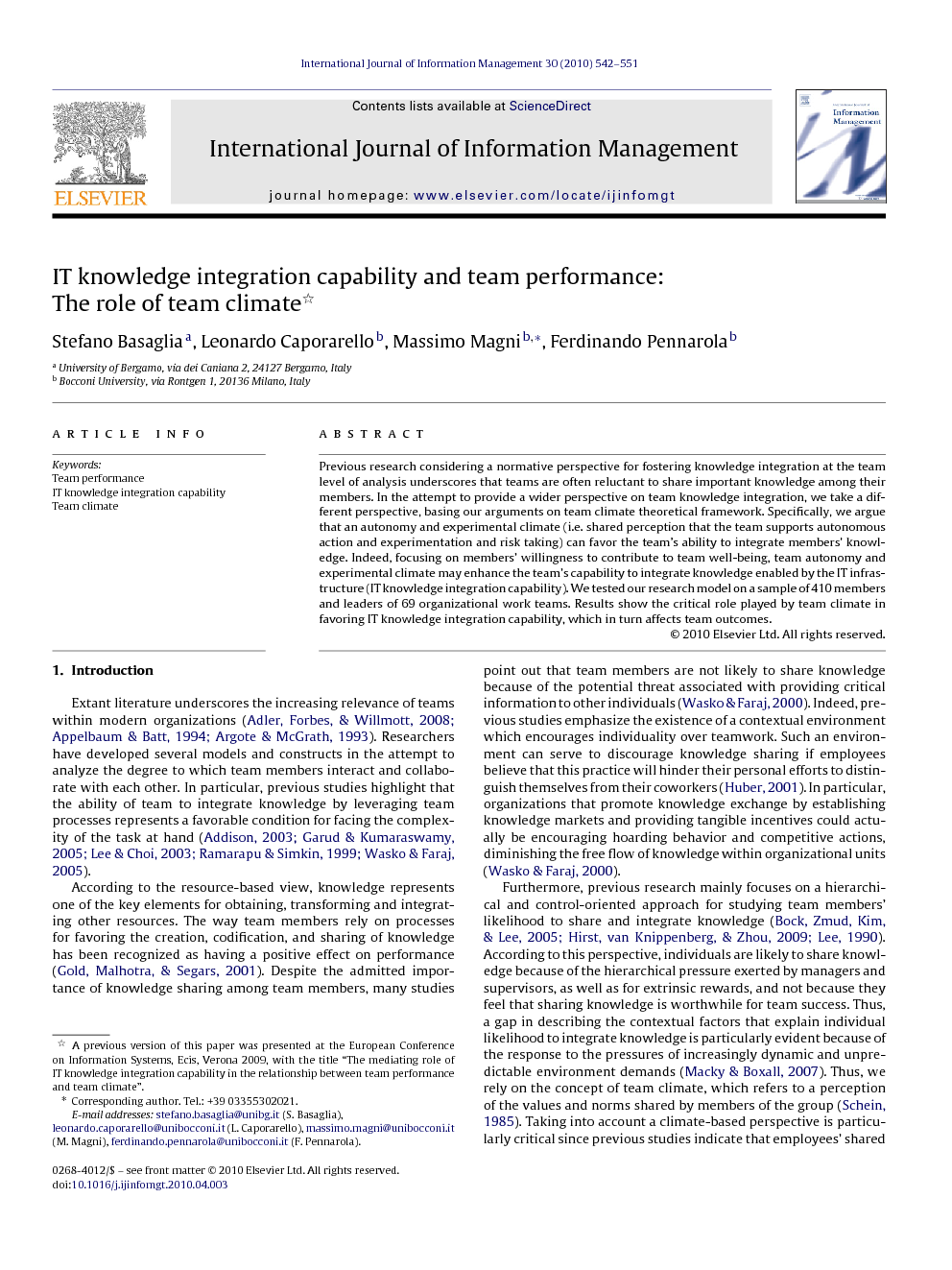 Previous research considering a normative perspective for fostering knowledge integration at the team level of analysis underscores that teams are often reluctant to share important knowledge among their members. In the attempt to provide a wider perspective on team knowledge integration, we take a different perspective, basing our arguments on team climate theoretical framework. Specifically, we argue that an autonomy and experimental climate (i.e. shared perception that the team supports autonomous action and experimentation and risk taking) can favor the team's ability to integrate members’ knowledge. Indeed, focusing on members’ willingness to contribute to team well-being, team autonomy and experimental climate may enhance the team's capability to integrate knowledge enabled by the IT infrastructure (IT knowledge integration capability). We tested our research model on a sample of 410 members and leaders of 69 organizational work teams. Results show the critical role played by team climate in favoring IT knowledge integration capability, which in turn affects team outcomes.

Extant literature underscores the increasing relevance of teams within modern organizations (Adler et al., 2008, Appelbaum and Batt, 1994 and Argote and McGrath, 1993). Researchers have developed several models and constructs in the attempt to analyze the degree to which team members interact and collaborate with each other. In particular, previous studies highlight that the ability of team to integrate knowledge by leveraging team processes represents a favorable condition for facing the complexity of the task at hand (Addison, 2003, Garud and Kumaraswamy, 2005, Lee and Choi, 2003, Ramarapu and Simkin, 1999 and Wasko and Faraj, 2005). According to the resource-based view, knowledge represents one of the key elements for obtaining, transforming and integrating other resources. The way team members rely on processes for favoring the creation, codification, and sharing of knowledge has been recognized as having a positive effect on performance (Gold, Malhotra, & Segars, 2001). Despite the admitted importance of knowledge sharing among team members, many studies point out that team members are not likely to share knowledge because of the potential threat associated with providing critical information to other individuals (Wasko & Faraj, 2000). Indeed, previous studies emphasize the existence of a contextual environment which encourages individuality over teamwork. Such an environment can serve to discourage knowledge sharing if employees believe that this practice will hinder their personal efforts to distinguish themselves from their coworkers (Huber, 2001). In particular, organizations that promote knowledge exchange by establishing knowledge markets and providing tangible incentives could actually be encouraging hoarding behavior and competitive actions, diminishing the free flow of knowledge within organizational units (Wasko & Faraj, 2000). Furthermore, previous research mainly focuses on a hierarchical and control-oriented approach for studying team members’ likelihood to share and integrate knowledge (Bock et al., 2005, Hirst et al., 2009 and Lee, 1990). According to this perspective, individuals are likely to share knowledge because of the hierarchical pressure exerted by managers and supervisors, as well as for extrinsic rewards, and not because they feel that sharing knowledge is worthwhile for team success. Thus, a gap in describing the contextual factors that explain individual likelihood to integrate knowledge is particularly evident because of the response to the pressures of increasingly dynamic and unpredictable environment demands (Macky & Boxall, 2007). Thus, we rely on the concept of team climate, which refers to a perception of the values and norms shared by members of the group (Schein, 1985). Taking into account a climate-based perspective is particularly critical since previous studies indicate that employees’ shared understanding of a situation drives their attitudes and behaviors (Hoegl et al., 2003 and Schneider, 2000). Along with the widely recognized importance of team capability to activate processes for integrating knowledge, previous studies underscore that the effectiveness of integration process capability needs information technologies that support such integration processes (Burgelman, 1983). Indeed, IT may enhance performance by facilitating team members’ interactions; this in turn enables people to get information that is pertinent to their interest and tasks (Kim, Chaudhury, & Rao, 2002). IT may influence performance by reducing the bounded rationality of decision-making (Bakos and Treacy, 1986 and Kim and Sanders, 2002). By incorporating the core knowledge of an organization, information technology can enhance the transformation of knowledge into action, and help employees to effectively share and integrate their knowledge (Armour, 2001). Therefore, information technology which is thoroughly interwoven with knowledge integration process can be conceptualized as IT knowledge integration capability (Kim et al., 2002 and Ray et al., 2005). Such a concept, in turn, represents a type of combinative capability (Kogut & Zander, 1992) consisting of knowledge process capability and technological infrastructure to abilitate such processes. Thus, drawing on knowledge-based view of the firm (Barney, 1991, Nelson and Winter, 1982 and Wernerfelt, 1984) as well as organizational climate theories (Denison, 1996, James et al., 1988 and Schneider and Reichers, 1983), our study proposes an integrative model for exploring the effect of team climate on IT knowledge integration capability. The basic argument underlying our model is that team climate may favor the circulation of information among team members thereby increasing the ability to integrate their knowledge through IT, which in turn influences team performance. The present study contributes to the extant literature in three ways. First, it provides a model that integrates the concepts of team climate, IT knowledge integration capability, and team performance. The understanding of team-level contextual antecedents of IT knowledge integration capability is likely to provide important insights associated with team design and management. Second, prior research considering the capabilities of knowledge integration primarily focuses on the firm level of analysis (Grant and Baden-Fuller, 1995, Ray et al., 2005 and Tiwana and McLean, 2005), while scant research conducted the analysis at a team level. Finally, the adoption of a team-level perspective on IT knowledge integration capability is consistent with the view that organizations do not “perform”; instead, individuals in an organization perform in ways that allow it exploit knowledge and to achieve desirable results (Klein & Kozlowski, 2000). Thus, such a perspective offers a finer level of granularity in understanding how employees integrate their knowledge to achieve higher performance.