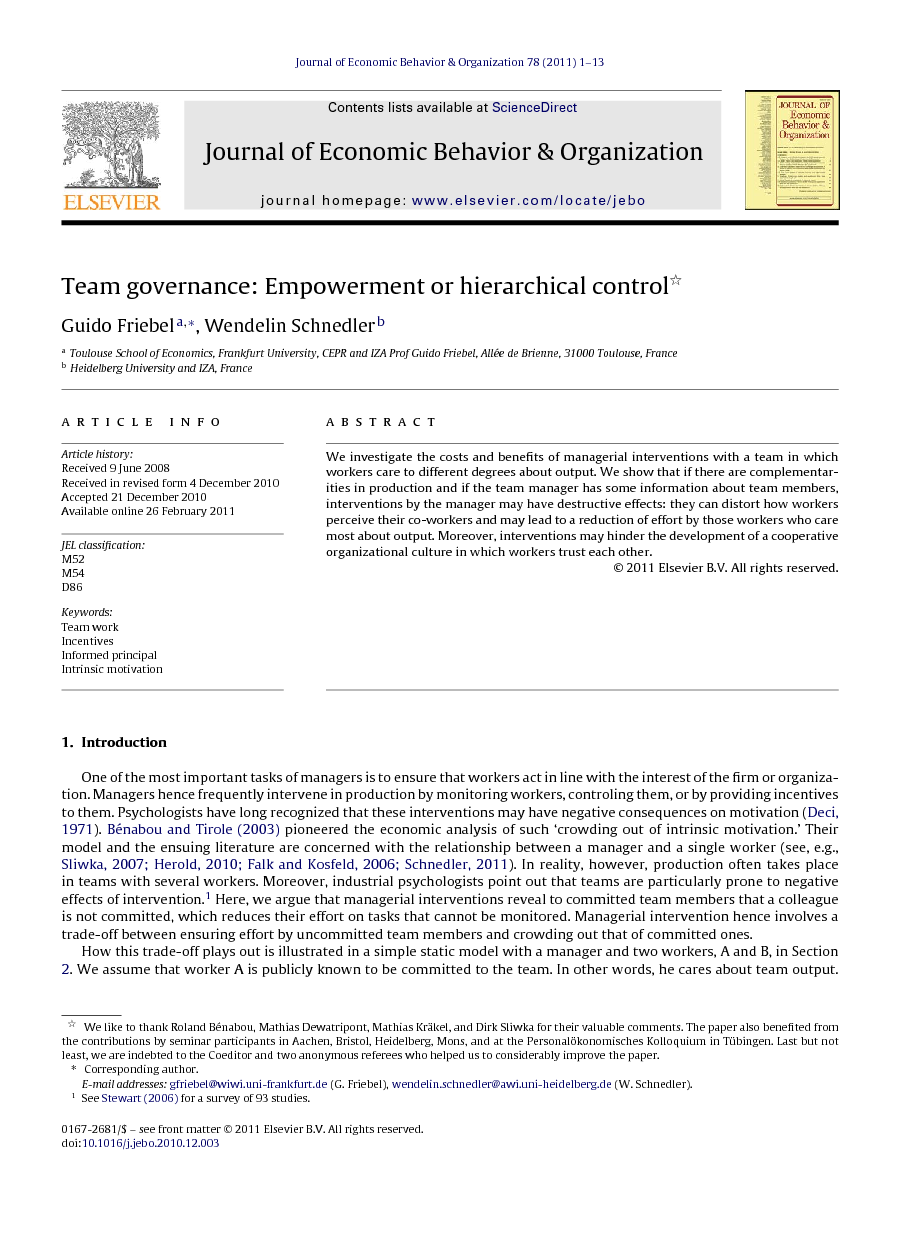 We investigate the costs and benefits of managerial interventions with a team in which workers care to different degrees about output. We show that if there are complementarities in production and if the team manager has some information about team members, interventions by the manager may have destructive effects: they can distort how workers perceive their co-workers and may lead to a reduction of effort by those workers who care most about output. Moreover, interventions may hinder the development of a cooperative organizational culture in which workers trust each other.

One of the most important tasks of managers is to ensure that workers act in line with the interest of the firm or organization. Managers hence frequently intervene in production by monitoring workers, controling them, or by providing incentives to them. Psychologists have long recognized that these interventions may have negative consequences on motivation (Deci, 1971). Bénabou and Tirole (2003) pioneered the economic analysis of such ‘crowding out of intrinsic motivation.’ Their model and the ensuing literature are concerned with the relationship between a manager and a single worker (see, e.g., Sliwka, 2007, Herold, 2010, Falk and Kosfeld, 2006 and Schnedler, 2011). In reality, however, production often takes place in teams with several workers. Moreover, industrial psychologists point out that teams are particularly prone to negative effects of intervention.1 Here, we argue that managerial interventions reveal to committed team members that a colleague is not committed, which reduces their effort on tasks that cannot be monitored. Managerial intervention hence involves a trade-off between ensuring effort by uncommitted team members and crowding out that of committed ones. How this trade-off plays out is illustrated in a simple static model with a manager and two workers, A and B, in Section 2. We assume that worker A is publicly known to be committed to the team. In other words, he cares about team output. B's commitment is the manager's private information. Production involves two tasks: a normal task with verifiable effort and an extra task with unverifiable effort. Efforts at the extra task are complements in the production of output; that is, any committed worker will only be willing to exert extra effort if his colleague is likely to be committed and matches this effort. So, worker A reduces extra effort when the manager's intervention signals that B is not committed. We use this model to predict the effects of intervention in teams in Section 3. The nature of the equilibrium depends on the importance of the extra task, and the general commitment in the workforce. First, when the extra task is not important, the manager empowers if and only if B is committed. The manager's information is then perfectly revealed. Compared to a self-managed team, two problems are eliminated: (i) the waste of extra effort by a committed worker who wrongly believes his colleague to be committed and (ii) the withholding of extra effort by a committed worker who wrongly believes his colleague to be uncommitted. The manager does not always intervene, which leads to the interesting observation that the mere presence of a manager sometimes suffices to improve on the outcomes of a self-managed team. Second, when the extra task is important and the general commitment in the workforce is high (so that B is likely to be committed), the manager always empowers the team and worker A always exerts extra effort. The manager hides her information because she does not want to lose this extra effort. As the manager never intervenes, her presence makes no difference, and the team may just as well be self-managed. Third, when the extra task is important but the general commitment in the workforce is low, the manager empowers committed workers, but only occasionally intervenes with uncommitted workers. The manager's information is then partially revealed: sometimes, the manager empowers uncommitted workers. In this case, empowerment deliberately deceives committed workers in order to induce them to exert extra effort. This extra effort is partially wasted because it is not matched by the uncommitted colleague. In Section 4, we examine three variations of the model to check for robustness. First, we relax the assumption that the manager is perfectly informed. As long as the information held by the manager is independent of that by the workers, interventions continue to be a potential signal for commitment and the essence of our results remains valid. However, since the manager's information may be wrong, sometimes she erroneously intervenes in the work of committed workers who then exert no extra effort. We call this the tragedy of committed but unmotivated workers, which is an unwanted side effect of having a manager. As another variation, we examine the case that all workers’ commitment is unknown and find that results are robust. Finally, we look at the possibility that committed workers repeatedly interact, so that effort can become a credible signal for commitment. We then discuss the limits of using this signal to re-establish trust after an unnecessary intervention. The next section relates our paper to the literature, while the last section concludes.

We have presented a first step toward an economic theory of team governance. A manager, who decides whether to empower the team or to intervene, faces a simple trade-off. While intervening increases effort for tasks that can be monitored easily, it may distort the effort incentives for tasks that cannot be monitored. The reason is that it affects team members’ beliefs about the commitment of their colleagues to the joint output. It follows that the optimality of intervention vs. empowerment depends on both prior beliefs about team members’ commitment and the importance of tasks that cannot be monitored. In a dynamic perspective, interventions may destroy the trusting atmosphere that is required for voluntary effort.