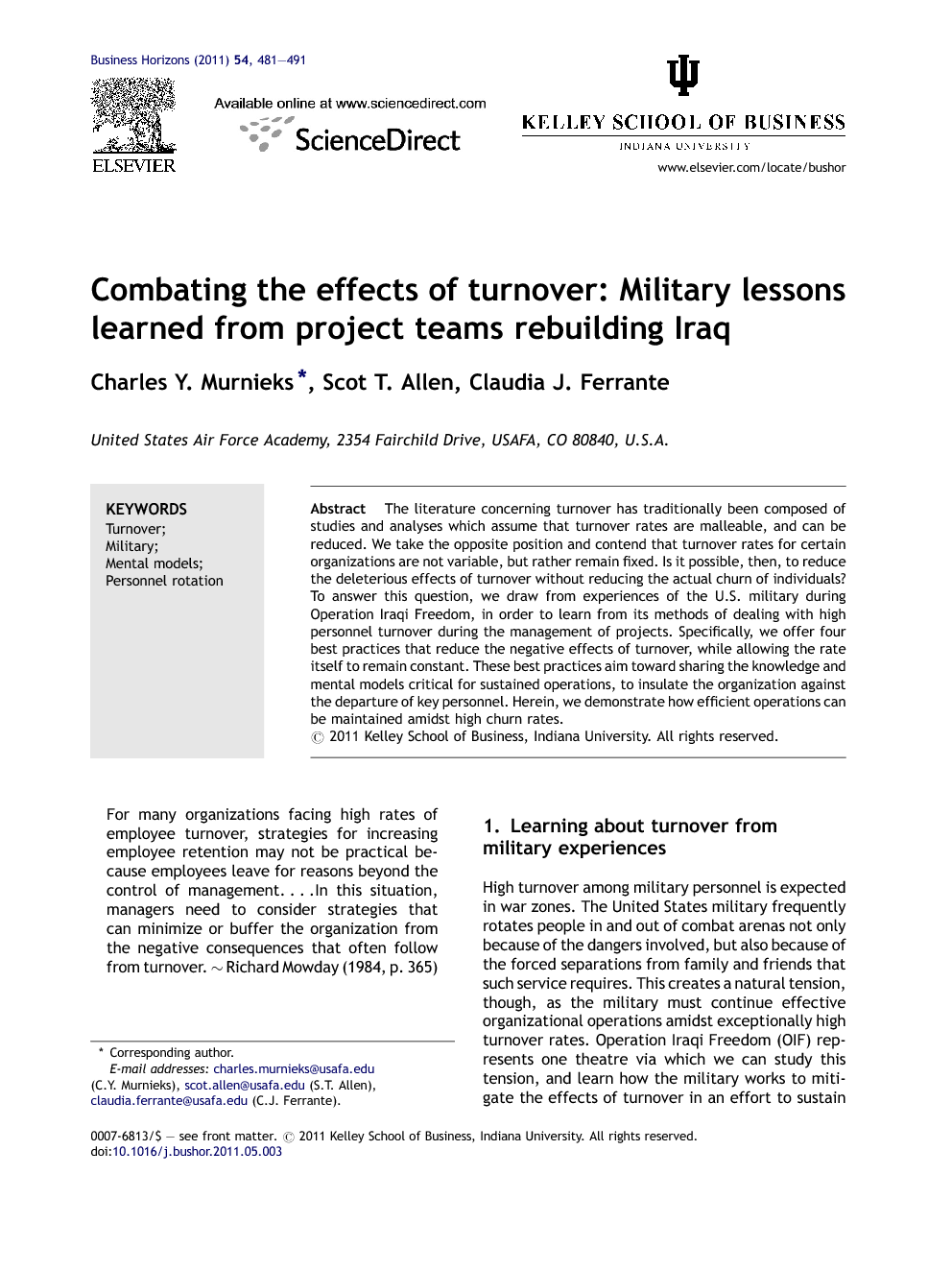 The literature concerning turnover has traditionally been composed of studies and analyses which assume that turnover rates are malleable, and can be reduced. We take the opposite position and contend that turnover rates for certain organizations are not variable, but rather remain fixed. Is it possible, then, to reduce the deleterious effects of turnover without reducing the actual churn of individuals? To answer this question, we draw from experiences of the U.S. military during Operation Iraqi Freedom, in order to learn from its methods of dealing with high personnel turnover during the management of projects. Specifically, we offer four best practices that reduce the negative effects of turnover, while allowing the rate itself to remain constant. These best practices aim toward sharing the knowledge and mental models critical for sustained operations, to insulate the organization against the departure of key personnel. Herein, we demonstrate how efficient operations can be maintained amidst high churn rates.

High turnover among military personnel is expected in war zones. The United States military frequently rotates people in and out of combat arenas not only because of the dangers involved, but also because of the forced separations from family and friends that such service requires. This creates a natural tension, though, as the military must continue effective organizational operations amidst exceptionally high turnover rates. Operation Iraqi Freedom (OIF) represents one theatre via which we can study this tension, and learn how the military works to mitigate the effects of turnover in an effort to sustain organizational effectiveness. Herein, we examine how the U.S. military has dealt with the massive turnover of its personnel in infrastructure reconstruction project teams working in Iraq under OIF. It is our hope that other organizations might learn from the tactics employed by the U.S. military to mitigate the deleterious effects that can emanate from high rates of personnel turnover. The phenomenon of ‘turnover’ has received much attention in the management literature, with over 100 articles published (Cotton & Tuttle, 1986). Although some turnover is considered functional (Dalton and Todor, 1979 and Dalton and Todor, 1982), most research highlights myriad negative aspects such as the cost of hiring and training replacements or disruptions to operations and productivity (Staw, 1980 and Steel et al., 2002). As regards project teams and their work, elevated turnover has been linked to poor performance (Parker and Skitmore, 2005 and Van der Vegt et al., 2010). To help organizations cope with these negative aspects, scholars have devoted much time and effort to studying the antecedents or causes leading to turnover. This approach inherently assumes turnover is a variable that can be manipulated. But what if this assumption is not valid for all organizations, as the introductory quote by Richard Mowday suggests? We approach the problem of turnover from a different angle: assuming the rate of turnover is a fixed variable, and as such, one that certain organizations cannot reduce (Dalton et al., 1981 and Mowday, 1984). We then ask: Is it possible to mitigate the unwanted effects of turnover on the organization, without reducing the actual churn of individuals? The contribution of our study lies in that we offer an effective alternative to dealing with the disruptive effects of turnover. Rather than try to reduce turnover rates themselves, we focus on reducing the deleterious effects of turnover, while allowing the rate to remain constant. We offer concrete tactical strategies employed at the ground level, every day, by the U.S. military to combat the damaging effects of personnel turnover. In this study, we employ a participant-observer methodology (cf. Rosenthal & Rosnow, 1991) where we draw on the first-hand observations and experiences of the first two authors during their tenure in OIF. From February 2008 to February 2010, the first two authors served tours of duty in Iraq; both worked as not only members of project teams, but also supervisors of project teams. During this time span, they observed over 45 personnel managing more than 450 projects valued at over $1.5 billion. Unfortunately, high personnel turnover is not a problem confined to the military. As such, our observations apply to organizations in several industries that are consistently plagued with high turnover rates and involuntary rotations in project teams. The data highlight vast turnover in industries such as hospitality (31.1%), services (18.9%), banking and finance (18.6%), and healthcare (18.2%), with significant levels—upwards of 39%—being involuntary (Bares, 2009). Moreover, the involuntary turnover experienced by the military among deployed project management teams is similar to that experienced by project teams in professional service firms (e.g., consulting, auditing, design, advertising/marketing), healthcare (e.g., surgical teams, patient treatment teams), and the airlines (e.g., cockpit and cabin crews). Workers in these organizations frequently rotate from one project or team to the next and must adjust to the nuances and culture of each new situation. In the sections that follow, we first describe the context of project management and turnover in the U.S. military to situate our discussion. Then, we integrate extant management theory on mental models with findings concerning turnover to propose a theoretical rationale for how to combat its deleterious effects. Finally, we populate this theoretical model with tactical strategies and examples from the U.S. military to demonstrate how it maintains effective operations in project teams, despite high turnover.

Turnover is a fact of life that businesses must accept. In the military, turnover of personnel in deployed environments is considered a joyful event, and is celebrated. When military personnel leave their deployed organizations, it means they are returning to friends and loved ones after being separated for up to a year. Most every soldier, sailor, and airman looks forward to this reunion. Nonetheless, the mission they leave behind must be accomplished, despite staff turnover. This situation creates an interesting laboratory in OIF, one where military project teams have innovated methods to reduce the detrimental effects of turnover without reducing the rate itself. We hope this study sparks conversation and imagination, and research to fill the gap of literature that currently exists regarding how to deal with the effects of systematic turnover. There exists a rich legacy of business and management scholars drawing from the experiences of the military to shed light on problems experienced by all firms (e.g., Douglas and Strutton, 2009 and Weeks, 2007). President Obama's former Chief of Staff, Rahm Emanuel, once said we should “never allow a crisis to go to waste” (Zeleny, 2009). We echo that sentiment in this context: organizations can learn from the experiences of the U.S. military to improve the way they deal with the effects of turnover.