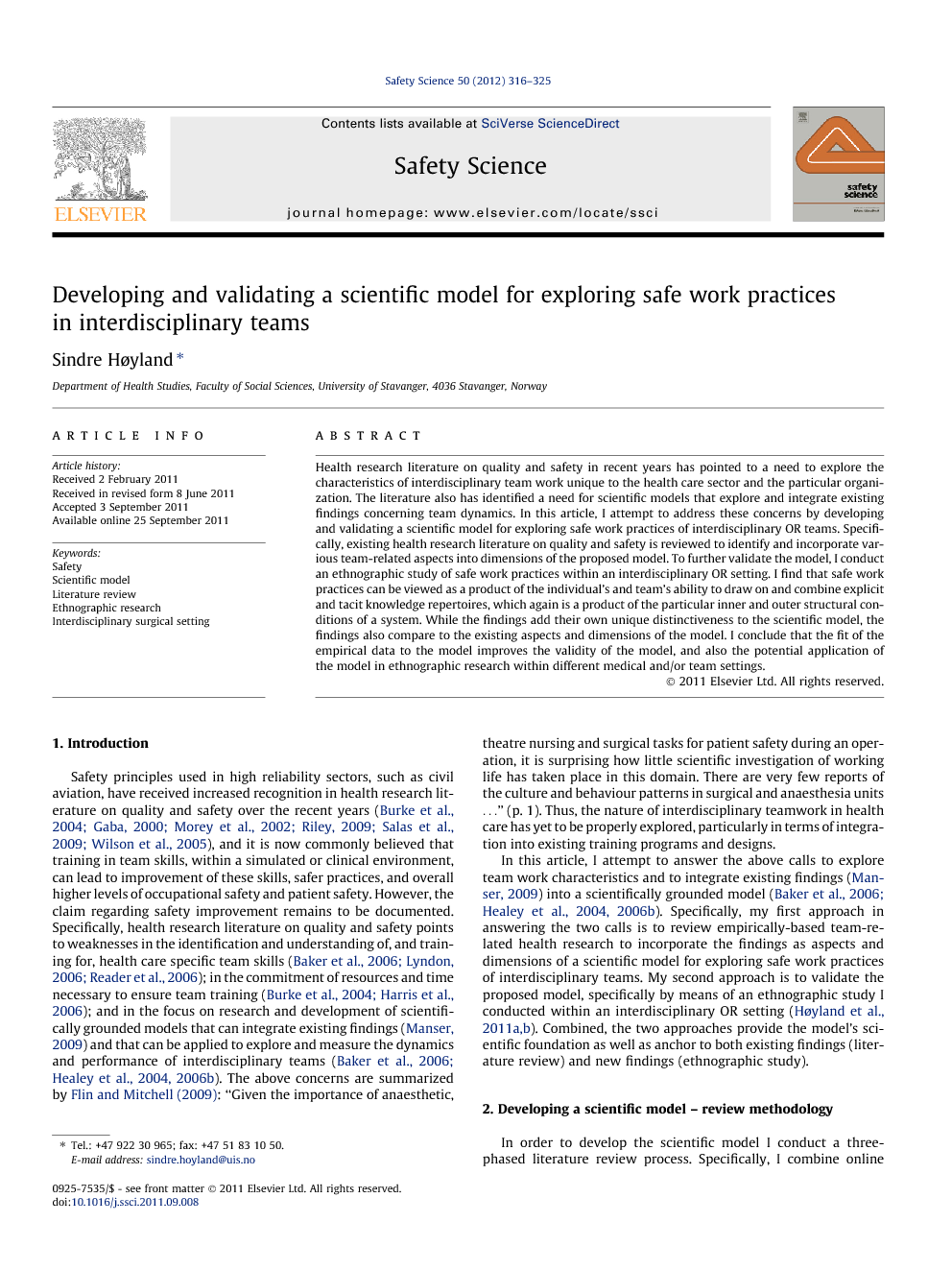 Health research literature on quality and safety in recent years has pointed to a need to explore the characteristics of interdisciplinary team work unique to the health care sector and the particular organization. The literature also has identified a need for scientific models that explore and integrate existing findings concerning team dynamics. In this article, I attempt to address these concerns by developing and validating a scientific model for exploring safe work practices of interdisciplinary OR teams. Specifically, existing health research literature on quality and safety is reviewed to identify and incorporate various team-related aspects into dimensions of the proposed model. To further validate the model, I conduct an ethnographic study of safe work practices within an interdisciplinary OR setting. I find that safe work practices can be viewed as a product of the individual’s and team’s ability to draw on and combine explicit and tacit knowledge repertoires, which again is a product of the particular inner and outer structural conditions of a system. While the findings add their own unique distinctiveness to the scientific model, the findings also compare to the existing aspects and dimensions of the model. I conclude that the fit of the empirical data to the model improves the validity of the model, and also the potential application of the model in ethnographic research within different medical and/or team settings.

Safety principles used in high reliability sectors, such as civil aviation, have received increased recognition in health research literature on quality and safety over the recent years (Burke et al., 2004, Gaba, 2000, Morey et al., 2002, Riley, 2009, Salas et al., 2009 and Wilson et al., 2005), and it is now commonly believed that training in team skills, within a simulated or clinical environment, can lead to improvement of these skills, safer practices, and overall higher levels of occupational safety and patient safety. However, the claim regarding safety improvement remains to be documented. Specifically, health research literature on quality and safety points to weaknesses in the identification and understanding of, and training for, health care specific team skills (Baker et al., 2006, Lyndon, 2006 and Reader et al., 2006); in the commitment of resources and time necessary to ensure team training (Burke et al., 2004 and Harris et al., 2006); and in the focus on research and development of scientifically grounded models that can integrate existing findings (Manser, 2009) and that can be applied to explore and measure the dynamics and performance of interdisciplinary teams (Baker et al., 2006, Healey et al., 2004 and Healey et al., 2006b). The above concerns are summarized by Flin and Mitchell (2009): “Given the importance of anaesthetic, theatre nursing and surgical tasks for patient safety during an operation, it is surprising how little scientific investigation of working life has taken place in this domain. There are very few reports of the culture and behaviour patterns in surgical and anaesthesia units …” (p. 1). Thus, the nature of interdisciplinary teamwork in health care has yet to be properly explored, particularly in terms of integration into existing training programs and designs. In this article, I attempt to answer the above calls to explore team work characteristics and to integrate existing findings (Manser, 2009) into a scientifically grounded model (Baker et al., 2006, Healey et al., 2004 and Healey et al., 2006b). Specifically, my first approach in answering the two calls is to review empirically-based team-related health research to incorporate the findings as aspects and dimensions of a scientific model for exploring safe work practices of interdisciplinary teams. My second approach is to validate the proposed model, specifically by means of an ethnographic study I conducted within an interdisciplinary OR setting (Høyland et al., 2011a and Høyland et al., 2011b). Combined, the two approaches provide the model’s scientific foundation as well as anchor to both existing findings (literature review) and new findings (ethnographic study).

In this paper, I found that reflections within health research literature on quality and safety have been oriented towards: • Identifying team related aspects, ranging from specific findings on and understandings of communication, training or performance and experience or learning to management or organization and complex or context. • Establishing specialized models that build on the findings of the particular study, such as models for addressing team skills and system factors (Catchpole et al., 2007), or models for understanding the mechanisms supporting team situation awareness (Mackintosh et al., 2009). I also found that reflections have yet to be properly extended beyond the frames of the specialized models and understandings above, to strengthen: • In-depth explorations that investigate and identify team specific behaviors, patterns, skills and so forth. unique to the particular health care organization and/or health care context (Baker et al., 2006, Flin and Mitchell, 2009, Lyndon, 2006 and Reader et al., 2006). • Follow-up initiatives that build on and integrate existing explorations and findings, to develop scientifically grounded models for understanding interdisciplinary team dynamics (Duguid, 2005, Henry, 2006, Infante, 2006 and Manser, 2009). The scientific model proposed in this article, represents one attempt at elevating efforts from specialized to more general applicable models for exploring team dynamics that also integrate existing explorations and findings. It follows that an implication for future studies and theoretical developments is to address the identified gaps or weaknesses in current team-related research within health care.