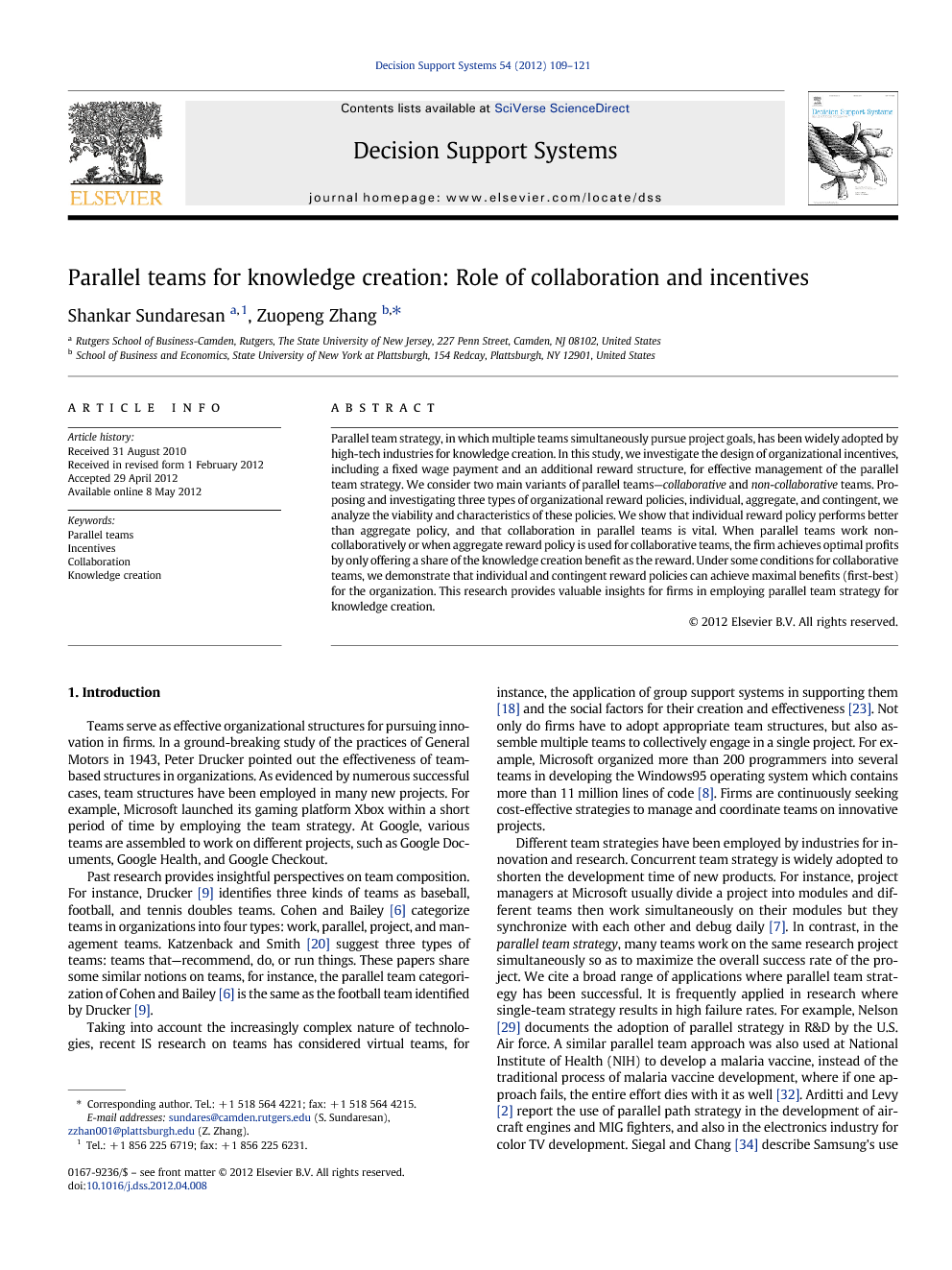 Parallel team strategy, in which multiple teams simultaneously pursue project goals, has been widely adopted by high-tech industries for knowledge creation. In this study, we investigate the design of organizational incentives, including a fixed wage payment and an additional reward structure, for effective management of the parallel team strategy. We consider two main variants of parallel teams—collaborative and non-collaborative teams. Proposing and investigating three types of organizational reward policies, individual, aggregate, and contingent, we analyze the viability and characteristics of these policies. We show that individual reward policy performs better than aggregate policy, and that collaboration in parallel teams is vital. When parallel teams work non-collaboratively or when aggregate reward policy is used for collaborative teams, the firm achieves optimal profits by only offering a share of the knowledge creation benefit as the reward. Under some conditions for collaborative teams, we demonstrate that individual and contingent reward policies can achieve maximal benefits (first-best) for the organization. This research provides valuable insights for firms in employing parallel team strategy for knowledge creation.

The increasingly competitive market has forced companies to seek more cost-effective ways to engage in knowledge creation. Recent trends in knowledge creation clearly indicate that companies are constantly searching for a better strategy to not only lower costs but also improve the quality of knowledge discovery. In this paper, we presented a model of parallel teams in which a firm employs multiple teams and designs incentives to motivate these teams to exert their best effort. We derive important managerial insights about the parallel team strategy and our analysis provides valuable guidelines for managers in deploying parallel teams as discussed below. First, incentivizing teams to effectively engage in knowledge creation is essential for firms to improve their productivity and overall performance. We show how to design incentives by choosing the combination of a fixed wage payment and rewards to induce workers' best efforts in knowledge innovation, enhancing the success rate of research projects for potential knowledge discovery. Second, when parallel teams work non-collaboratively due to organizational constraints, the firm should not offer any fixed payment to the teams, but only offer a share of the knowledge creation benefit as the reward. Third, under a collaborative structure, we demonstrate that the first-best solution can be achieved under certain conditions. Successful teams can be rewarded individually or all teams collectively when the project succeeds. Under the individual reward policy, although it is possible to achieve the first-best effort levels, the incentive to motivate collaboration may not be so strong because only successful teams get the reward. In contrast, under the aggregate reward policy, teams will equally share the total reward as long as a team succeeds, so the teams will collaborate voluntarily. However, the first-best solution cannot be achieved. To take the advantages of the positive features of both the individual and aggregate reward policies, we propose the contingent reward policy that rewards only successful teams and the amount of reward increases with the total number of successful teams. This contingent policy can be implemented to achieve the first-best solution and also facilitate the collaboration among teams. This study sheds light on how incentives and collaboration among teams affect organizational decisions on employing parallel teams in knowledge creation. Future research may explore the competition among parallel teams and how to exploit it for organizational benefit, study the uncertainty of innovation benefit with potential knowledge discovery, and investigate the impacts of information technology on team collaboration. In conclusion, our paper provides valuable insights for managers to determine the structure and level of rewards in managing parallel teams and achieving optimal organizational benefits.