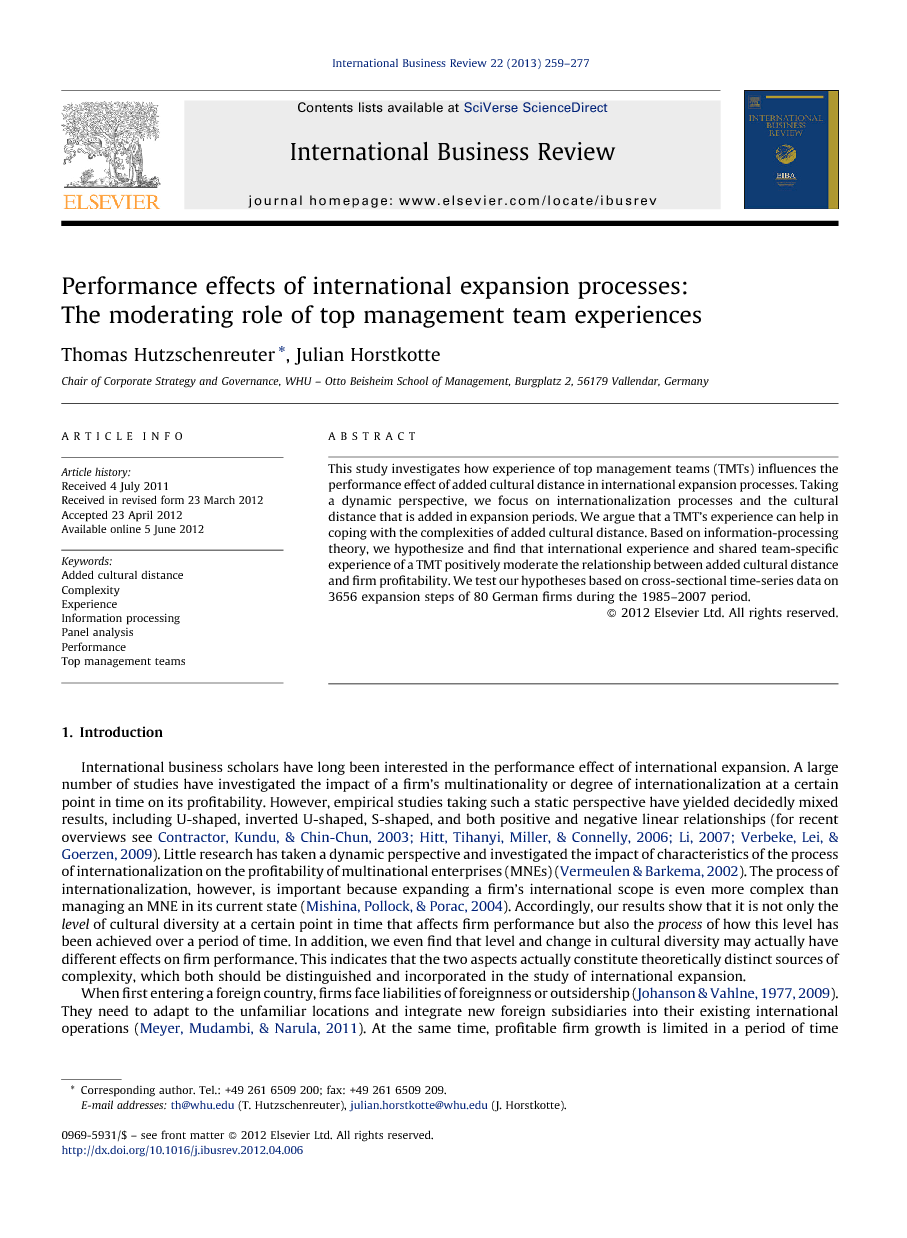 International business scholars have long been interested in the performance effect of international expansion. A large number of studies have investigated the impact of a firm's multinationality or degree of internationalization at a certain point in time on its profitability. However, empirical studies taking such a static perspective have yielded decidedly mixed results, including U-shaped, inverted U-shaped, S-shaped, and both positive and negative linear relationships (for recent overviews see Contractor et al., 2003, Hitt et al., 2006, Li, 2007 and Verbeke et al., 2009). Little research has taken a dynamic perspective and investigated the impact of characteristics of the process of internationalization on the profitability of multinational enterprises (MNEs) (Vermeulen & Barkema, 2002). The process of internationalization, however, is important because expanding a firm's international scope is even more complex than managing an MNE in its current state (Mishina, Pollock, & Porac, 2004). Accordingly, our results show that it is not only the level of cultural diversity at a certain point in time that affects firm performance but also the process of how this level has been achieved over a period of time. In addition, we even find that level and change in cultural diversity may actually have different effects on firm performance. This indicates that the two aspects actually constitute theoretically distinct sources of complexity, which both should be distinguished and incorporated in the study of international expansion. When first entering a foreign country, firms face liabilities of foreignness or outsidership (Johanson and Vahlne, 1977 and Johanson and Vahlne, 2009). They need to adapt to the unfamiliar locations and integrate new foreign subsidiaries into their existing international operations (Meyer, Mudambi, & Narula, 2011). At the same time, profitable firm growth is limited in a period of time (Penrose, 1959). Firms are constrained in their ability to expand and successfully cope with complexity added in the internationalization process in a limited period of time (Tan, 2003). For example, Vermeulen and Barkema (2002) and Wagner (2004) find that if firms expand too fast, i.e., undertake too many internationalization activities per period of time, their efficiency will suffer. Besides the mere number of expansion steps, the added complexity, and hence the additional costs of expanding internationally vary with the distance between newly entered markets and markets where the firm already has a presence (Ghemawat, 2001), with cultural distance, i.e., differences in national cultures between countries, being recognized as a particularly important source of complexity (e.g., Gomez-Mejia and Palich, 1997, Verbeke et al., 2009 and Yu et al., 2009). In this paper, we take a dynamic perspective and specifically focus on change. We investigate time periods and the cultural distance added by international expansion steps undertaken in those periods to address our first research question: What is the impact of complexity in the form of the amount of cultural distance added in a period of international expansion on the profitability of the expanding MNE? However, we believe that a central contingency factor in the empirical analysis of performance effects of internationalization has been largely neglected: the firm's management. It is highly relevant as complexity added in the international expansion process comes with additional information processing requirements for managers (Penrose, 1959). We believe that, in particular, a firm's top management team can make a difference since coordinating change and making strategic decisions, like expansion into foreign countries, is usually the task of the strategic apex of the organization (e.g., Barkema and Shvyrkov, 2007, Hambrick et al., 1996 and Mintzberg, 1971). Thus, it is the TMT that faces information processing requirements in the internationalization process, i.e., the need to gather, share, and attend to information, and then jointly analyze and integrate it as a team to handle complexity (Hinsz, Tindale, & Vollrath, 1997). Experience of the top management team affects its knowledge and its information processing ability, and as such its performance as a unit (Hambrick and Mason, 1984, Kor, 2003 and Stewart, 2006). As a consequence, such experience influences the team's ability to reap the benefits and cope with the costs of international expansion resulting, for instance, from cultural distance. In this way, top managers’ experience may moderate the performance effect of international expansion processes in general, and added cultural distance, in particular. Nonetheless, the role of top managers in dealing with change has received limited empirical attention in this context. This is especially surprising as multiple studies have made arguments based on managerial resources and limitations, which are key to Penrose's theory of the growth of the firm (1959), and yet they often do not include this aspect in the empirical analysis. As Hennart's review (2007) concludes, the “literature underplays the role of management”. In this paper, we directly address this issue with our second research question: How can experience of a firm's top management team moderate the relationship between added cultural distance – being one source of complexity in a period of international expansion – and firm profitability?