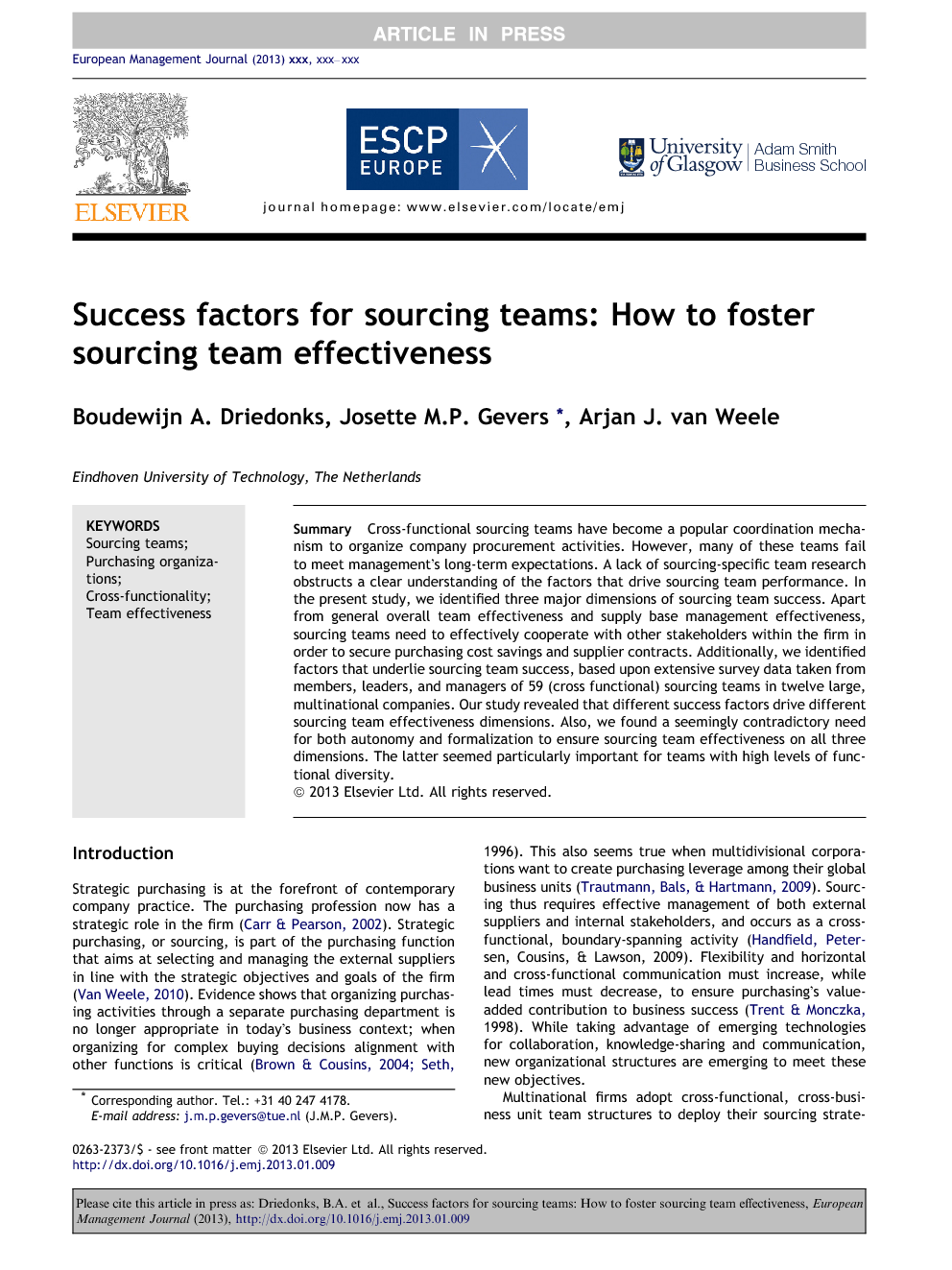 Strategic purchasing is at the forefront of contemporary company practice. The purchasing profession now has a strategic role in the firm (Carr & Pearson, 2002). Strategic purchasing, or sourcing, is part of the purchasing function that aims at selecting and managing the external suppliers in line with the strategic objectives and goals of the firm (Van Weele, 2010). Evidence shows that organizing purchasing activities through a separate purchasing department is no longer appropriate in today’s business context; when organizing for complex buying decisions alignment with other functions is critical (Brown and Cousins, 2004 and Seth, 1996). This also seems true when multidivisional corporations want to create purchasing leverage among their global business units (Trautmann, Bals, & Hartmann, 2009). Sourcing thus requires effective management of both external suppliers and internal stakeholders, and occurs as a cross-functional, boundary-spanning activity (Handfield, Petersen, Cousins, & Lawson, 2009). Flexibility and horizontal and cross-functional communication must increase, while lead times must decrease, to ensure purchasing’s value-added contribution to business success (Trent & Monczka, 1998). While taking advantage of emerging technologies for collaboration, knowledge-sharing and communication, new organizational structures are emerging to meet these new objectives. Multinational firms adopt cross-functional, cross-business unit team structures to deploy their sourcing strategies, to manage their suppliers, and to harmonize their supply operations. Team-based organizational structures with purchasing professionals working alongside representatives from other functional areas (e.g., research and development, quality, engineering, finance, depending on the specific sourcing category), replace traditional purchasing departments and mono-functional buying center structures and processes (Ellram and Pearson, 1993, Giunipero and Vogt, 1997, Johnson et al., 2002, Monczka et al., 2006, Seth, 1996, Trent and Monczka, 1994 and Trent and Monczka, 1998), a trend that is forecasted to continue (Zheng, Knight, Harland, Humby, & James, 2007). Scholars emphasize the role of team structures to align the interests of all internal stakeholders within a company with respect to sourcing and to deal with potential conflicts of interest among the stakeholders involved (Hardt, Reinecke, & Spiller, 2007). Team structures allow for more flexibility and improve horizontal- and cross-functional communication for complex purchasing decision-making. Such decision-making should result in better purchasing performance in terms of cost, quality, and innovation, and ultimately improve a company’s financial results (Carr & Pearson, 2002). The use of team structures in purchasing organizations seems to correlate with positive performance outcomes. However, success has no guarantee and extant research indicates that the implementation of sourcing teams knows many challenges. Companies that implement sourcing teams face the risk that, within months after start-up, teams’ ambition levels decrease as motivation and cohesiveness among team members flag (Johnson & Leenders, 2004). Also, not uncommonly teams report to lack a mandate, which delays projects significantly when the teams try to close a contract (Englyst, Jorgensen, Johansen, & Mikkelsen, 2008). Similar concerns were voiced in the companies we visited. Effective management of sourcing teams is a key lever for increasing the purchasing function’s contribution to company profitability. Although quite some research has been devoted to buyer–supplier relationships (e.g. Gadde and Hulthen, 2009, Hald et al., 2009 and Penttinen and Palmer, 2007), the internal organization of the purchasing function has achieved far less attention (Trent & Monczka, 2003). Ideas from prescriptive literature in the area of sourcing team management (e.g., Banfield, 1999 and Philippart et al., 2005) have hardly been tested empirically. Of course, team effectiveness has been studied extensively in other settings, such as in manufacturing, new product development, and service organizations. Yet these studies provide limited guidance for sourcing team management, since their contexts and performance requirements differ from those of sourcing teams in a number of ways. A combination of part-time team member allocations and cross-functional and cross-business unit team compositions characterizes the context of sourcing teams, whereas the teams referred to above often reside in one business unit, or have fulltime dedicated members (Trent, 1998). Sourcing teams often deal with conflicting interests of different stakeholders, who may perceive the purchasing function to be of limited strategic importance (Carr & Pearson, 2002). At the same time, sourcing teams depend on others external to the team, since operational buying activities typically occur elsewhere in the organization (Karjalainen, Kemppainen, & van Raaij, 2009). Prior research has not explored how this purchasing context affects different antecedents of team effectiveness. Empirical research could identify success factors underlying sourcing team effectiveness, and provide insight into the mechanisms that drive sourcing team effectiveness in practice. This article presents the results of a large-scale field survey study addressing the effectiveness of sourcing teams. Drawing a sample from a variety of companies that switched from more traditional purchasing structures to team-based structures, our aim was to identify critical success factors for these sourcing teams and to provide insight into the relationships between input factors, team processes, and specific dimensions of their effectiveness. The study translates implications from prior team effectiveness research in other areas into purchasing settings and offers guidance for companies that have introduced or plan to introduce sourcing teams. The article proceeds as follows. In the next section we describe a conceptual framework and review literature for factors of potentially high impact on sourcing team effectiveness. In section three we describe the method we used to test this framework empirically. Section four, then, presents the results. Finally, in section five, we summarize the findings, discuss the implications and limitations of the study and we raise additional questions for future research. The focus and scope of the present research do not allow for a detailed description of the set up, context, and activities of the sourcing teams under study. The interested reader is referred to an article by Englyst and colleagues (2008) for an elaborate case description of a sourcing team similar to the ones we studied.