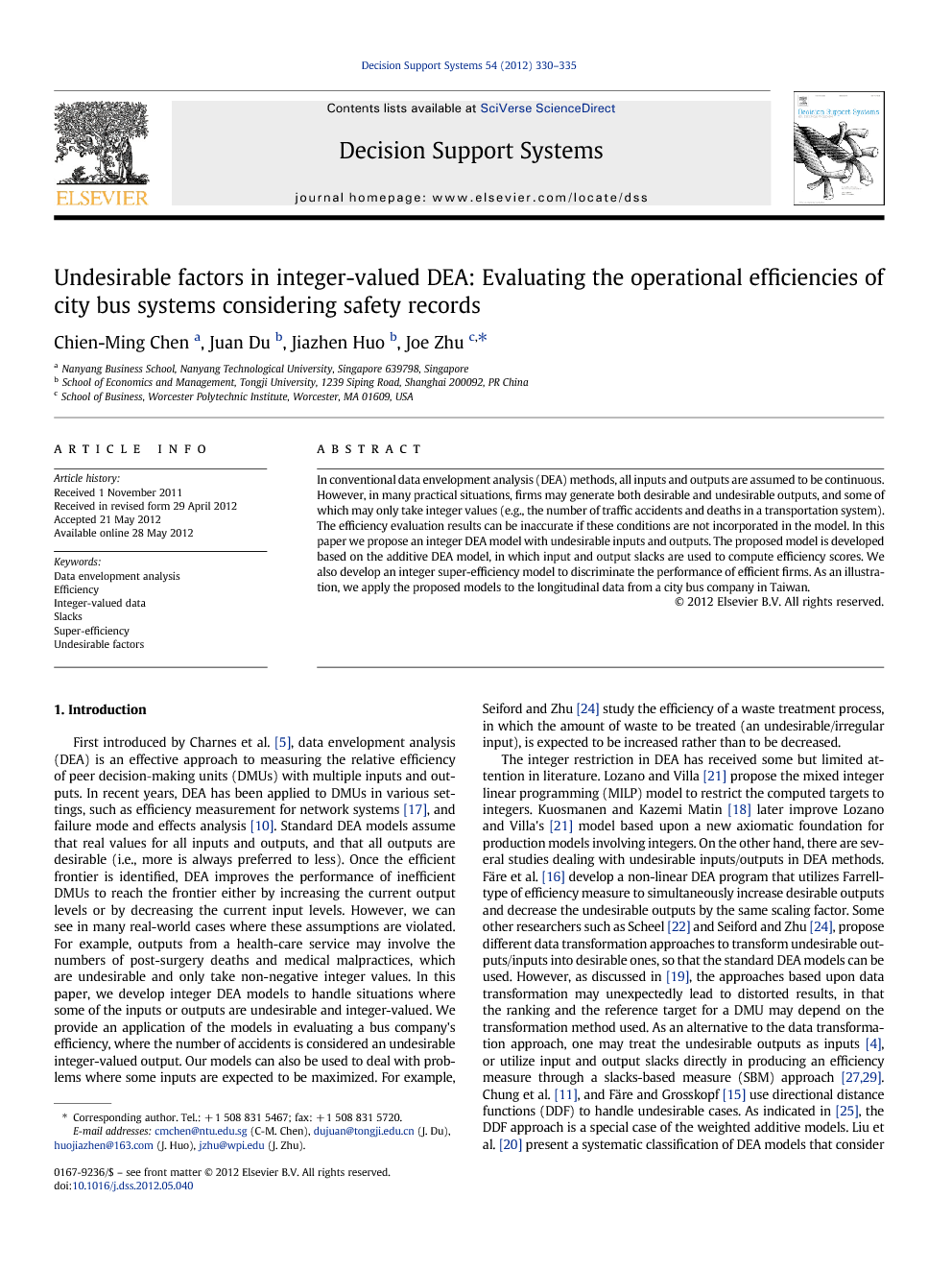 In conventional data envelopment analysis (DEA) methods, all inputs and outputs are assumed to be continuous. However, in many practical situations, firms may generate both desirable and undesirable outputs, and some of which may only take integer values (e.g., the number of traffic accidents and deaths in a transportation system). The efficiency evaluation results can be inaccurate if these conditions are not incorporated in the model. In this paper we propose an integer DEA model with undesirable inputs and outputs. The proposed model is developed based on the additive DEA model, in which input and output slacks are used to compute efficiency scores. We also develop an integer super-efficiency model to discriminate the performance of efficient firms. As an illustration, we apply the proposed models to the longitudinal data from a city bus company in Taiwan.

First introduced by Charnes et al. [5], data envelopment analysis (DEA) is an effective approach to measuring the relative efficiency of peer decision‐making units (DMUs) with multiple inputs and outputs. In recent years, DEA has been applied to DMUs in various settings, such as efficiency measurement for network systems [17], and failure mode and effects analysis [10]. Standard DEA models assume that real values for all inputs and outputs, and that all outputs are desirable (i.e., more is always preferred to less). Once the efficient frontier is identified, DEA improves the performance of inefficient DMUs to reach the frontier either by increasing the current output levels or by decreasing the current input levels. However, we can see in many real-world cases where these assumptions are violated. For example, outputs from a health-care service may involve the numbers of post-surgery deaths and medical malpractices, which are undesirable and only take non-negative integer values. In this paper, we develop integer DEA models to handle situations where some of the inputs or outputs are undesirable and integer-valued. We provide an application of the models in evaluating a bus company's efficiency, where the number of accidents is considered an undesirable integer-valued output. Our models can also be used to deal with problems where some inputs are expected to be maximized. For example, Seiford and Zhu [24] study the efficiency of a waste treatment process, in which the amount of waste to be treated (an undesirable/irregular input), is expected to be increased rather than to be decreased. The integer restriction in DEA has received some but limited attention in literature. Lozano and Villa [21] propose the mixed integer linear programming (MILP) model to restrict the computed targets to integers. Kuosmanen and Kazemi Matin [18] later improve Lozano and Villa's [21] model based upon a new axiomatic foundation for production models involving integers. On the other hand, there are several studies dealing with undesirable inputs/outputs in DEA methods. Färe et al. [16] develop a non-linear DEA program that utilizes Farrell-type of efficiency measure to simultaneously increase desirable outputs and decrease the undesirable outputs by the same scaling factor. Some other researchers such as Scheel [22] and Seiford and Zhu [24], propose different data transformation approaches to transform undesirable outputs/inputs into desirable ones, so that the standard DEA models can be used. However, as discussed in [19], the approaches based upon data transformation may unexpectedly lead to distorted results, in that the ranking and the reference target for a DMU may depend on the transformation method used. As an alternative to the data transformation approach, one may treat the undesirable outputs as inputs [4], or utilize input and output slacks directly in producing an efficiency measure through a slacks-based measure (SBM) approach [27] and [29]. Chung et al. [11], and Färe and Grosskopf [15] use directional distance functions (DDF) to handle undesirable cases. As indicated in [25], the DDF approach is a special case of the weighted additive models. Liu et al. [20] present a systematic classification of DEA models that consider undesirable factors, including slacks-based models, radial models, and models with Russell measurement. In this paper, we use the slacks-based measure (SBM) proposed in [20] and [27], and formulate additive efficiency and super-efficiency DEA models to deal with integer-valued undesirable data. Our slacks-based measure of super-efficiency analysis is capable of deriving a full ranking of efficient DMUs. Being able to distinguish the performance of efficient DMUs can not only provide decision makers with better insights into the performance of peer DMUs, but also help carry out further analysis for managerial decisions, such as resource-allocation decision (see, e.g., [9]). We illustrate our approach and models through an empirical study of Kaohsiung city bus transit from 1994 to 2009, in which the number of bus accidents represents an integer-valued undesirable output. The rest of this paper is organized as follows. Section 2 proposes an additive DEA model subject to integer restriction and undesirable factors. Section 3 presents an additive super-efficiency model to further distinguish efficient DMUs. We present an empirical application to Kaohsiung Municipal Bus in Section 4. Section 5 concludes with a summary of our contributions.

In practice, it is not uncommon to see production outputs that are undesirable or can only take integer values. Standard DEA models are not able to handle these situations because the models assume that inputs and outputs are both continuous and desirable. Therefore the reference targets indentified through conventional DEA models are likely to be fractional and hence cannot be implemented in practice. This paper proposes additive efficiency and super-efficiency models to cope with integer constraints and undesirable factors, in order to help distinguish the performance of all DMUs. We illustrate our models by an empirical efficiency evaluation of Kaohsiung City Bus operation spanning from the years 1994 to 2009. Each year's bus operation is viewed as a DMU, which utilizes inputs (both integer- and real-valued) to produce outputs (including an integer-valued undesirable output). All DMUs can be fully differentiated by additive super-efficiency scores. Also, we described some interesting managerial implications from the results obtained from the proposed models. As a final technical note, in this city bus application the number of passengers is modeled as an output measure, which may not be under the direct discretion of the bus company. In the presence of non-discretionary inputs and outputs, it is possible to develop similar additive efficiency and super-efficiency models as according to models (2) and (4) in this paper, simply by deleting the slack vectors from the corresponding constraints. However, if we take non-controllable/non-discretionary measures into consideration, the related super-efficiency model may become infeasible under the VRS assumption. We also see a wide variety of potential application areas where models developed in this paper can be used. Take health-care providers for example. The numbers of full-time physicians and nurses are good examples of integer-valued inputs, while total operating expenses can be modeled as a regular input that take real values. For outputs, total operating revenue and the number of total medical cases are examples of real-valued and integer-valued desirable outputs, respectively. The numbers of post-surgery deaths and medical malpractices can be modeled as undesirable integer outputs.