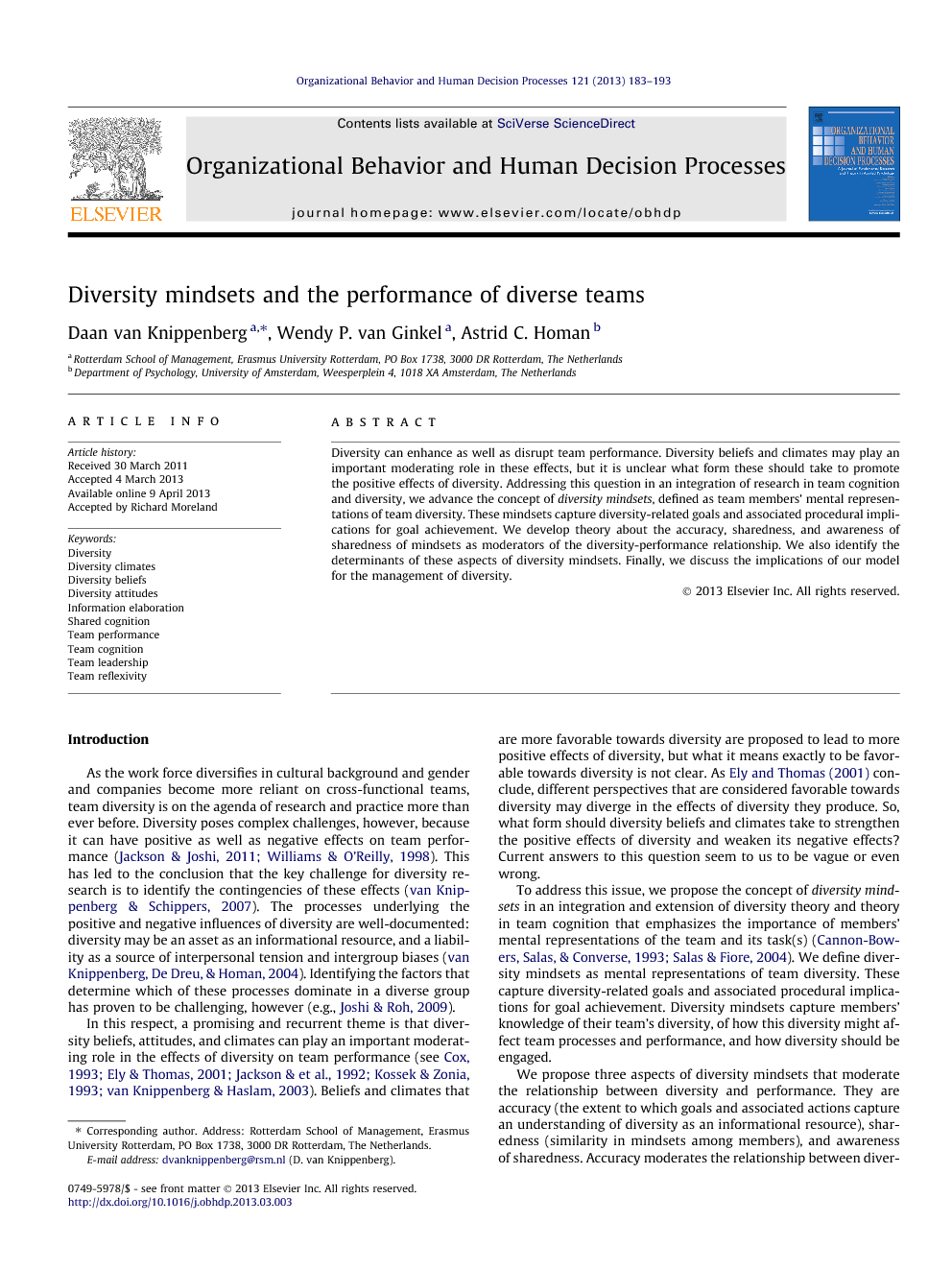 Diversity can enhance as well as disrupt team performance. Diversity beliefs and climates may play an important moderating role in these effects, but it is unclear what form these should take to promote the positive effects of diversity. Addressing this question in an integration of research in team cognition and diversity, we advance the concept of diversity mindsets, defined as team members’ mental representations of team diversity. These mindsets capture diversity-related goals and associated procedural implications for goal achievement. We develop theory about the accuracy, sharedness, and awareness of sharedness of mindsets as moderators of the diversity-performance relationship. We also identify the determinants of these aspects of diversity mindsets. Finally, we discuss the implications of our model for the management of diversity.

As the work force diversifies in cultural background and gender and companies become more reliant on cross-functional teams, team diversity is on the agenda of research and practice more than ever before. Diversity poses complex challenges, however, because it can have positive as well as negative effects on team performance (Jackson and Joshi, 2011 and Williams and O’Reilly, 1998). This has led to the conclusion that the key challenge for diversity research is to identify the contingencies of these effects (van Knippenberg & Schippers, 2007). The processes underlying the positive and negative influences of diversity are well-documented: diversity may be an asset as an informational resource, and a liability as a source of interpersonal tension and intergroup biases (van Knippenberg, De Dreu, & Homan, 2004). Identifying the factors that determine which of these processes dominate in a diverse group has proven to be challenging, however (e.g., Joshi & Roh, 2009). In this respect, a promising and recurrent theme is that diversity beliefs, attitudes, and climates can play an important moderating role in the effects of diversity on team performance (see Cox, 1993, Ely and Thomas, 2001, Jackson et al., 1992, Kossek and Zonia, 1993 and van Knippenberg and Haslam, 2003). Beliefs and climates that are more favorable towards diversity are proposed to lead to more positive effects of diversity, but what it means exactly to be favorable towards diversity is not clear. As Ely and Thomas (2001) conclude, different perspectives that are considered favorable towards diversity may diverge in the effects of diversity they produce. So, what form should diversity beliefs and climates take to strengthen the positive effects of diversity and weaken its negative effects? Current answers to this question seem to us to be vague or even wrong. To address this issue, we propose the concept of diversity mindsets in an integration and extension of diversity theory and theory in team cognition that emphasizes the importance of members’ mental representations of the team and its task(s) ( Cannon-Bowers et al., 1993 and Salas and Fiore, 2004). We define diversity mindsets as mental representations of team diversity. These capture diversity-related goals and associated procedural implications for goal achievement. Diversity mindsets capture members’ knowledge of their team’s diversity, of how this diversity might affect team processes and performance, and how diversity should be engaged. We propose three aspects of diversity mindsets that moderate the relationship between diversity and performance. They are accuracy (the extent to which goals and associated actions capture an understanding of diversity as an informational resource), sharedness (similarity in mindsets among members), and awareness of sharedness. Accuracy moderates the relationship between diversity and performance, and both sharedness and awareness of sharedness make this moderating influence stronger. And there are three related but conceptually distinct characteristics of mindset accuracy that co-determine the positive effects of mindsets. Those characteristics are promotion rather than prevention goals, exploration rather than exploitation goals, and team-specific understanding of diversity as an informational resource. For the development of accurate and shared mindsets, we point to the role of team leadership and identify contingencies that affect the impact of leadership on mindset development.