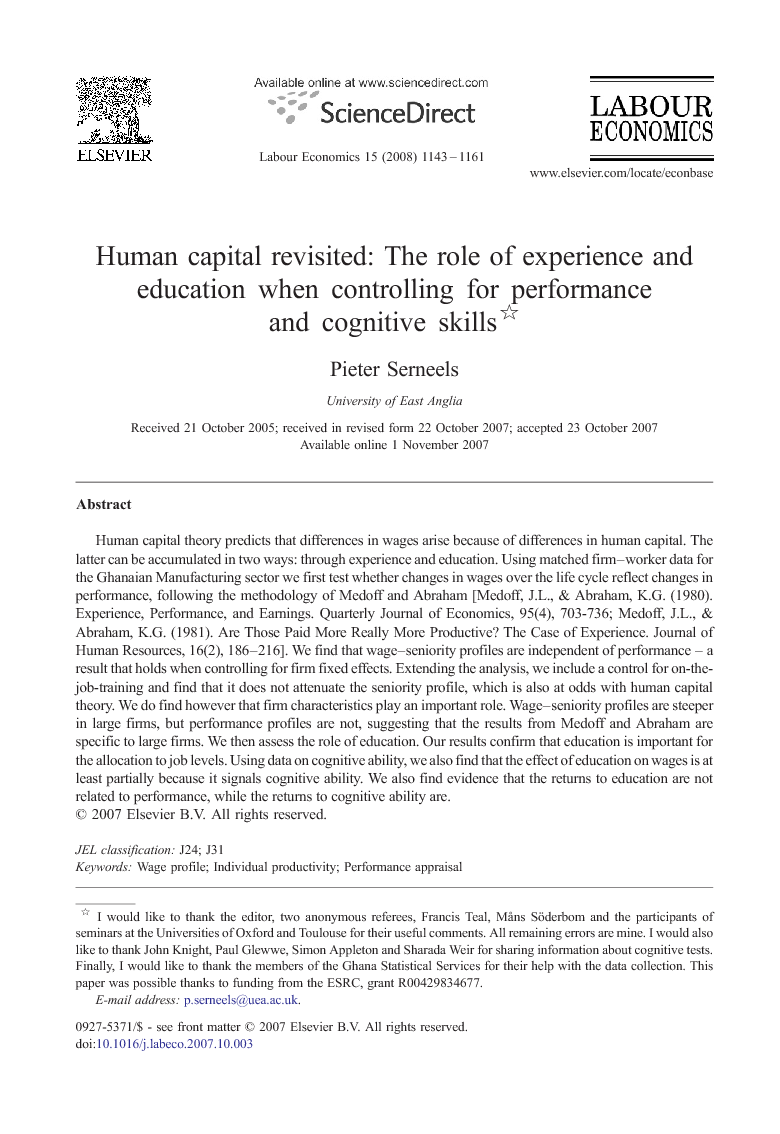 Human capital theory predicts that differences in wages arise because of differences in human capital. The latter can be accumulated in two ways: through experience and education. Using matched firm–worker data for the Ghanaian Manufacturing sector we first test whether changes in wages over the life cycle reflect changes in performance, following the methodology of Medoff and Abraham [Medoff, J.L., & Abraham, K.G. (1980). Experience, Performance, and Earnings. Quarterly Journal of Economics, 95(4), 703-736; Medoff, J.L., & Abraham, K.G. (1981). Are Those Paid More Really More Productive? The Case of Experience. Journal of Human Resources, 16(2), 186–216]. We find that wage–seniority profiles are independent of performance – a result that holds when controlling for firm fixed effects. Extending the analysis, we include a control for on-the-job-training and find that it does not attenuate the seniority profile, which is also at odds with human capital theory. We do find however that firm characteristics play an important role. Wage–seniority profiles are steeper in large firms, but performance profiles are not, suggesting that the results from Medoff and Abraham are specific to large firms. We then assess the role of education. Our results confirm that education is important for the allocation to job levels. Using data on cognitive ability, we also find that the effect of education on wages is at least partially because it signals cognitive ability. We also find evidence that the returns to education are not related to performance, while the returns to cognitive ability are.

Human capital theory argues that changes in wages arise because of differences in human capital. Assuming that changes in wages reflect changes in productivity, it claims that accumulation of human capital increases productivity, and thus wages. Human capital is accumulated in two ways: through experience and education. More experienced and more educated workers are therefore expected to earn more (see for example Becker, 1964 and Mincer, 1974). Empirical evidence confirms that there is a positive relationship between wages and experience, and between wages and education1, but, as is well known, these may by explained by alternative theories.2 Regarding the positive relationship between wages and experience, an alternative view is that changes in earnings are unrelated to changes in productivity, but arise from institutional factors, like explicit or implicit contracts (see for example Lazear, 1979, Doeringer and Piore, 1971 and Azariadis, 1979). In the case of education, an alternative view is that schooling does not necessarily increase human capital but that it works as a signalling device, implying that students with higher cognitive ability reach higher levels of education (Spence, 1973). How to test between human capital theory and these alternative views? Regarding the effect of experience, to test accurately whether changes in wages reflect changes in productivity over the life cycle, one needs data on earnings and performance at the individual level. Data on individual productivity is, however, still uncommon, as a measure of individual output is costly to collect and also difficult to apply to most production processes.3 However, an alternative approach, often used in personnel psychology, is to measure individual performance through the assessment of the worker's supervisor (see Sacket et al., 1988). This is the approach followed by Medoff and Abraham (henceforth MA) in their seminal papers in the Quarterly Journal of Economics (1980) and the Journal of Human Resources (1981). MA argue that, if human capital theory holds, including performance evaluation in the wage equation should reduce the effect of seniority on wages. They find that it does not. Two recent papers have sought to reproduce these results. Flabbi and Ichino (2001) complement supervisor's evaluation with ‘more objective’ measures like recorded absenteeism and misconduct, and reach a similar conclusion. Dohmen (2004) shows, using data for a large Dutch firm, that seniority–wage profiles are largely independent of controls for reported performance in cross–sectional wage regressions, and, using panel data, that performance evaluation also shapes life cycle earnings profiles since it affects how fast a worker climbs the firm's career (and wage) ladder. These papers all focus on one or two large firms. Bishop (1987) uses data across a sample of firms, and, applying a different methodology, finds that large and unionized firms have steeper earnings profiles, but not performance profiles. We collected a measure of performance appraisal identical to the one used by MA. Although the measure remains somewhat controversial for many, research by personnel economists and psychologists provides supportive evidence in favour of the measure, as discussed by MA and by work that has appeared since then, which we will discuss in the next section. We first reproduce MA's analysis and confirm their results. We also test whether these results are robust for the difference in our sample design by controlling for firm fixed effects, and find that they are. We then extend the analysis by using on-the-job training data. If human capital is accumulated on the job, including a measure for on-the-job training in the wage equation should attenuate the effect of seniority on wages. We find that it does not. Exploiting the fact that we have data across firms, we further assess the role of firm characteristics. We find that wage–seniority profiles are steeper in large firms, but performance profiles are not, suggesting that the results from MA hold especially for large firms. To test the second prediction, that higher educated workers earn more because their accumulated human capital increases their productivity, we include a measure for cognitive ability in the wage equation. Other work has followed a similar approach but has typically focused on the returns to cognitive skills.4 In our approach we are interested in how including cognitive ability in the wage equation affects the coefficient of schooling. If the main function of the education system is to screen more cognitive able students (rather than to accumulate human capital), including this measure should reduce the effect of schooling on wages. Using a non-verbal test for cognitive ability (IQ) that is commonly used in cognitive psychology, we find that its inclusion reduces the effect of education, suggesting that schooling works as a screening device. We also find evidence that the returns to cognitive ability, rather than those to education, are related to performance. The next section discusses the context, data, and key variables. In Section 3 we assess the role of experience, both reproducing and extending the analysis carried out by MA. Section 4 analyzes the role of education, while Section 5 concludes.

Human capital theory predicts that differences in wages arise because of differences in human capital. The latter can be accumulated in two ways: through experience and education. Using matched firm–worker data for the Ghanaian Manufacturing sector, this paper tests two predictions that are associated with human capital theory. In a first part we test whether the changes in wages over the life cycle reflect changes in performance due to changes in human capital accumulated on the job. Using a measure of performance evaluation identical to the one used by Medoff and Abraham, 1980 and Medoff and Abraham, 1981, we confirm their result, namely that wage seniority profiles are independent of performance evaluation. Thus, performance evaluation is not taken into account in the wage setting process. This result holds when we control for firm fixed effects – to account for the fact that our data spans across a sample of firms. We extend the analysis by including a measure for on-the-job training in the wage equation. Although the variable has a positive effect on wages, its inclusion does not attenuate the effect of experience, as expected from human capital theory. This suggests that either on-the-job training serves as a reason to increase wages without increasing performance, or that seniority is not related to productivity. Both are at odds with the human capital interpretation. Exploiting the fact that we have data across firms, we also assess the role of firm characteristics and find that especially firm size plays a role. While seniority profiles are steeper in large firms, performance profiles are not, indicating that the results from existing work – Medoff and Abraham, 1980 and Medoff and Abraham, 1981, Flabbi and Ichino (2001) and Dohmen (2004), which all use data on one or two large firms – do not necessarily hold for small firms, where earnings profiles are less steep. Thus, although human capital theory may have limited explanatory power in a more institutionalised setting, like large (and unionized) firms, it may still be powerful in a more competitive environment (like small firms in a developing country). We also assess the role of education and find that education is important for the allocation to a job level and a firm. The direct effect of education on wages is at least partially because it signals cognitive ability. We find no evidence that the returns to education are related to performance, while the returns to cognitive ability are. The analysis in this paper, like the work of Medoff and Abraham and the reproductions thereof, is based on a measure of performance evaluation. We report evidence in support of this measure, including empirical proof from our own data on the strong relationship between average performance evaluation in the firm and average output per worker. We find that adding performance evaluation does not add value to the wage equation and that education and experience are sufficient indicators to explain the variation in wages. However, caution is needed in the interpretation of their coefficients as the returns to experience and education do not necessarily reflect returns to accumulated human capital.