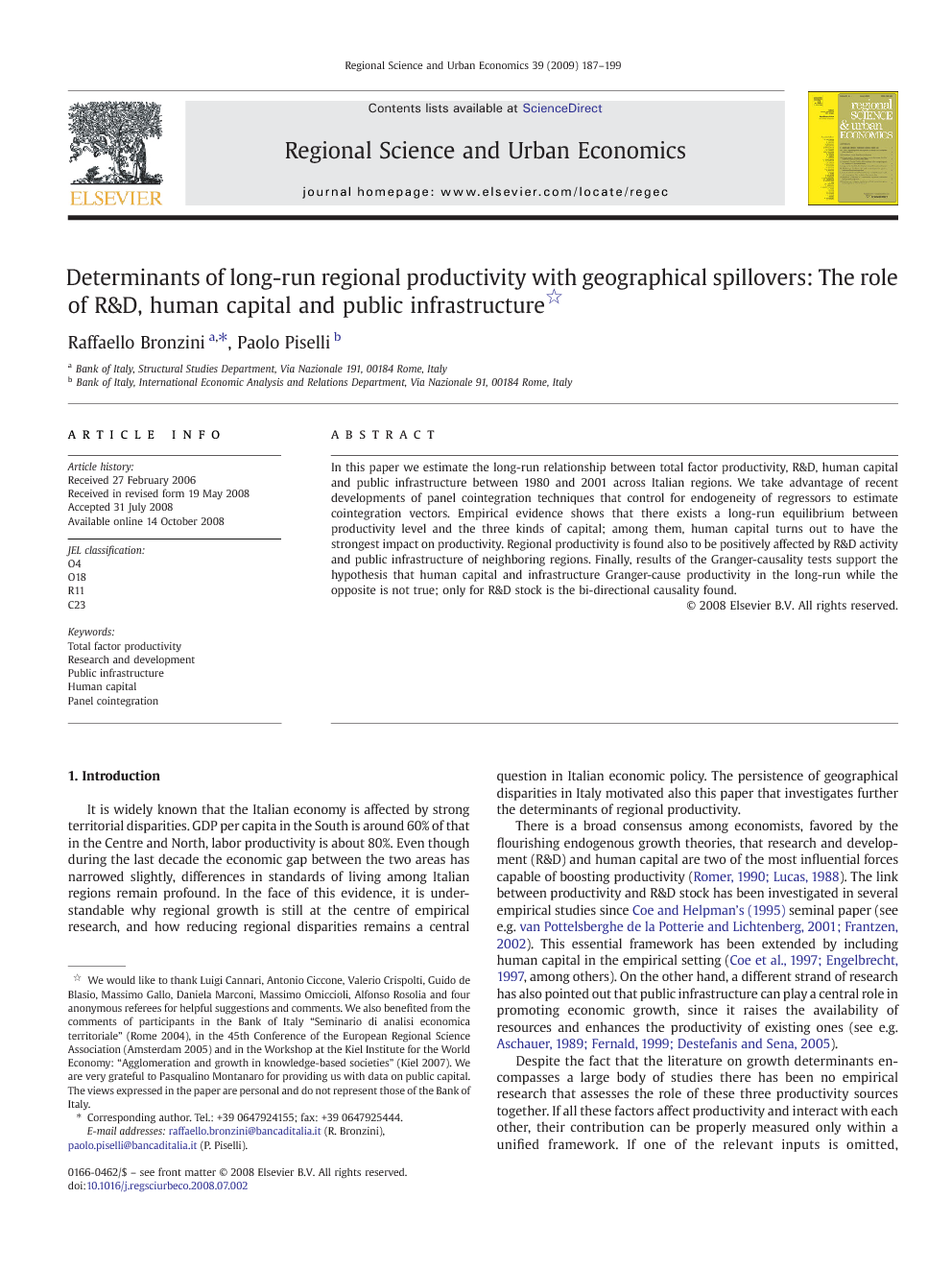 In this paper we estimate the long-run relationship between total factor productivity, R&D, human capital and public infrastructure between 1980 and 2001 across Italian regions. We take advantage of recent developments of panel cointegration techniques that control for endogeneity of regressors to estimate cointegration vectors. Empirical evidence shows that there exists a long-run equilibrium between productivity level and the three kinds of capital; among them, human capital turns out to have the strongest impact on productivity. Regional productivity is found also to be positively affected by R&D activity and public infrastructure of neighboring regions. Finally, results of the Granger-causality tests support the hypothesis that human capital and infrastructure Granger-cause productivity in the long-run while the opposite is not true; only for R&D stock is the bi-directional causality found.

It is widely known that the Italian economy is affected by strong territorial disparities. GDP per capita in the South is around 60% of that in the Centre and North, labor productivity is about 80%. Even though during the last decade the economic gap between the two areas has narrowed slightly, differences in standards of living among Italian regions remain profound. In the face of this evidence, it is understandable why regional growth is still at the centre of empirical research, and how reducing regional disparities remains a central question in Italian economic policy. The persistence of geographical disparities in Italy motivated also this paper that investigates further the determinants of regional productivity. There is a broad consensus among economists, favored by the flourishing endogenous growth theories, that research and development (R&D) and human capital are two of the most influential forces capable of boosting productivity (Romer, 1990 and Lucas, 1988). The link between productivity and R&D stock has been investigated in several empirical studies since Coe and Helpman’s (1995) seminal paper (see e.g. van Pottelsberghe de la Potterie and Licthenberg, 2001 and Frantzen, 2002). This essential framework has been extended by including human capital in the empirical setting (Coe et al., 1997 and Engelbrecht, 1997, among others). On the other hand, a different strand of research has also pointed out that public infrastructure can play a central role in promoting economic growth, since it raises the availability of resources and enhances the productivity of existing ones (see e.g. Aschauer, 1989, Fernald, 1999 and Destefanis and Sena, 2005). Despite the fact that the literature on growth determinants encompasses a large body of studies there has been no empirical research that assesses the role of these three productivity sources together. If all these factors affect productivity and interact with each other, their contribution can be properly measured only within a unified framework. If one of the relevant inputs is omitted, estimations of elasticity of the other factors are bound to be biased (Frantzen, 2000). In this paper we try to fill this gap. We assess the role of the technological knowledge, as measured by the stock of R&D capital, the human capital, and the stock of public infrastructure, in enhancing the Total Factor Productivity (TFP) of Italian regions over the period 1980–2001. Our contribution to empirical literature on regional growth lies also in the investigation of geographical spillovers. Given the small scale of our territorial units we consider the interplays among regions potentially relevant, thus we test whether, and to what extent, the factors enhancing productivity in one region can also affect the productivity in the neighboring regions. We hope that our analysis, ranking the forces according to their relative importance in driving regional productivity, can provide some useful insights to design regional policies attempting to narrow territorial gaps. Unlike the majority of empirical models, we focus on the level of the variables instead of on growth rates. As Hall and Jones (1999) have argued, the investigation of the level may be a more natural research question since differences in the level of productivity or income reflect differences in welfare, and growth rates are studied only for their effect on the level of variables. In addition, by estimating models in growth rates information on the relationships between the levels of the variables are lost. However, the estimation of a model in which the variables are in level poses the well-known problem of spurious regression if the variables are I(1) and are not cointegrated. We handle this question by taking advantage of the recent panel cointegration techniques, that allow us to explore long-run relations controlling for omitted or unobservable factors through time and regional fixed effects. Moreover, as Temple (1999) pointed out, endogeneity of the regressors and reverse causality can bias the results of the econometric estimates of growth models such as ours. In order to deal with these issues we use an appropriate estimator that controls for endogeneity of the regressors as well as for autocorrelation of the error term (Pedroni, 1996 and Pedroni, 2000). Next, we carry out Granger-causality tests in the error correction models to verify both the long and the short-run causality. With respect to the majority of similar works based on panels of countries, this paper takes advantage of the sub-national perspective that reduces the weakness of cross-country analyses, plagued by the scant cross-country comparability of data on education systems, R&D expenditures and infrastructure. Results show that there exists a long-run equilibrium between the productivity level and the three kinds of capital; among them, human capital turns out to have the strongest impact on TFP. Regional productivity is found to be positively affected also by R&D activity and the public infrastructure of neighboring regions. Finally, results of the Granger-causality tests support the hypothesis that human capital and public capital cause productivity in the long run while the opposite is not true; only for R&D capital stock is the bi-directional causality found. The remainder of the paper is organized as follows. In the second section we discuss the theoretical background and the related empirical literature. In the third and fourth sections we present the empirical model and the econometric strategy. The results of the econometric exercises are reported in section five, while some extensions, together with the robustness checks and some summarizing remarks, are discussed in the final two sections.

The empirical literature stimulated by the endogenous growth theories is large. In this paper we have made a step forward by analyzing simultaneously the impact of three crucial engines of growth, for the first time altogether, on the level of TFP of Italian regions. This allowed us to compare the different contribution of each factor on growth and single out the main policy-relevant instruments to promote regional development. We have also assessed the role of geographical spillovers verifying whether R&D and public capital stocks in one region affect productivity of the close regions. Our contribution to the existing literature is on the methodological ground as well: we have estimated long-run relationships among the variables in level using recent panel cointegration method and we have run Granger causality tests to explore direction of causality among regressors and productivity. Our results summarize the evidence consistently in favor of the positive long-run effect of these factors on productivity. A long-run relationship has been detected and the coefficients, estimated using Pedroni’s method, are all positive and statistically significant, included those of the variables measuring geographical spillovers. Through Granger-causality tests we show that human capital and public capital are exogenous in the long run, while R&D comes out endogenous. A larger stock of R&D is associated with productivity expansion. However, the contribution to productivity is rather small and less than that of the other variables. This might be due to inter-regional knowledge spillovers, which attenuate the effect of local R&D activity on local TFP. This belief is confirmed by our data. When we estimate a model with geographical spillovers we find that R&D activity of the other regions has a positive impact on local productivity and that knowledge spillovers occur not only among the closest regions but also across distant ones. In addition, according to Granger-causality tests, R&D efforts turns out to be endogenous in the long and short run, that is R&D stock is Granger-caused by productivity and the other variables of the model. Even though empirical research has found that R&D efforts are important in boosting countries’ economic growth, on the whole our results suggest that encouraging R&D activity can be considered only a weak instrument for reducing regional disparities. On the other hand, human capital and infrastructure seem to play an important role in explaining regional productivity dynamics. Both have a positive and quite remarkable effect on productivity. In the baseline model an increase of 1% in human capital or public infrastructure raises productivity by approximately 0.38 and 0.11%, respectively. Our results indicate also that inter-regional spillovers from public capital occur – infrastructure of proximate regions positively affect local productivity – and that such spillovers turn out to be rather spatially concentrated. Finally, both human and public capital are found to be exogenous in the long run by our causality tests: this means that in the Granger sense a causality direction from human and public capital to productivity is verified, but not vice versa. Overall, these findings have several policy implications. Human capital seems to have the strongest direct impact on regional productivity, appearing also exogenous in sense of Granger. According to our estimates, investment in human capital show also larger returns than investment in public infrastructure. Such a result qualifies human capital as the most suitable and effective instrument to design a regional policy aimed at narrowing regional gaps. Also public capital can be seriously considered as a relevant policy instrument owing to his non-negligible, yet smaller, impact on productivity and its capability of activating inter-regional spillovers. These conclusions are in part similar to those drawn by Ciccone et al. (2004), who find a remarkably stronger influence of human capital but, unlike our paper, no role of public capital. In this paper we focused on the long-run driving forces of regional productivity. It would be worthwhile to extend the present analysis at least in two directions. First, by investigating the potential interplay between these productivity sources, and between them and labor or private physical capital; second, by exploring in more detail to what extent, and through which channels, inter-regional spillovers occur. Empirical analyses on these topics would be particularly useful to shed additional light on the forces behind regional economic development.