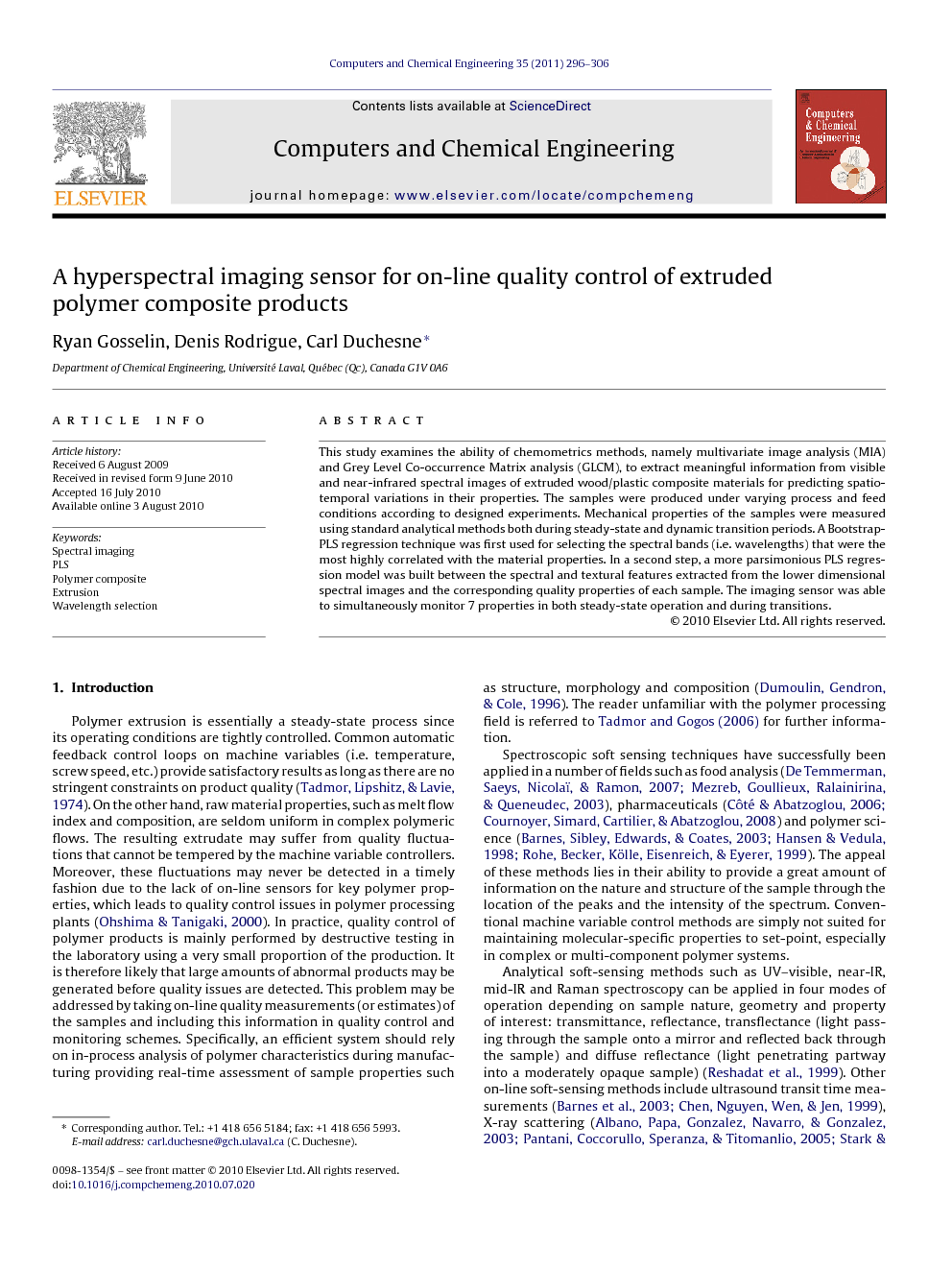 This study examines the ability of chemometrics methods, namely multivariate image analysis (MIA) and Grey Level Co-occurrence Matrix analysis (GLCM), to extract meaningful information from visible and near-infrared spectral images of extruded wood/plastic composite materials for predicting spatio-temporal variations in their properties. The samples were produced under varying process and feed conditions according to designed experiments. Mechanical properties of the samples were measured using standard analytical methods both during steady-state and dynamic transition periods. A Bootstrap-PLS regression technique was first used for selecting the spectral bands (i.e. wavelengths) that were the most highly correlated with the material properties. In a second step, a more parsimonious PLS regression model was built between the spectral and textural features extracted from the lower dimensional spectral images and the corresponding quality properties of each sample. The imaging sensor was able to simultaneously monitor 7 properties in both steady-state operation and during transitions.

Polymer extrusion is essentially a steady-state process since its operating conditions are tightly controlled. Common automatic feedback control loops on machine variables (i.e. temperature, screw speed, etc.) provide satisfactory results as long as there are no stringent constraints on product quality (Tadmor, Lipshitz, & Lavie, 1974). On the other hand, raw material properties, such as melt flow index and composition, are seldom uniform in complex polymeric flows. The resulting extrudate may suffer from quality fluctuations that cannot be tempered by the machine variable controllers. Moreover, these fluctuations may never be detected in a timely fashion due to the lack of on-line sensors for key polymer properties, which leads to quality control issues in polymer processing plants (Ohshima & Tanigaki, 2000). In practice, quality control of polymer products is mainly performed by destructive testing in the laboratory using a very small proportion of the production. It is therefore likely that large amounts of abnormal products may be generated before quality issues are detected. This problem may be addressed by taking on-line quality measurements (or estimates) of the samples and including this information in quality control and monitoring schemes. Specifically, an efficient system should rely on in-process analysis of polymer characteristics during manufacturing providing real-time assessment of sample properties such as structure, morphology and composition (Dumoulin, Gendron, & Cole, 1996). The reader unfamiliar with the polymer processing field is referred to Tadmor and Gogos (2006) for further information. Spectroscopic soft sensing techniques have successfully been applied in a number of fields such as food analysis (De Temmerman et al., 2007 and Mezreb et al., 2003), pharmaceuticals (Côté and Abatzoglou, 2006 and Cournoyer et al., 2008) and polymer science (Barnes et al., 2003, Hansen and Vedula, 1998 and Rohe et al., 1999). The appeal of these methods lies in their ability to provide a great amount of information on the nature and structure of the sample through the location of the peaks and the intensity of the spectrum. Conventional machine variable control methods are simply not suited for maintaining molecular-specific properties to set-point, especially in complex or multi-component polymer systems. Analytical soft-sensing methods such as UV–visible, near-IR, mid-IR and Raman spectroscopy can be applied in four modes of operation depending on sample nature, geometry and property of interest: transmittance, reflectance, transflectance (light passing through the sample onto a mirror and reflected back through the sample) and diffuse reflectance (light penetrating partway into a moderately opaque sample) (Reshadat et al., 1999). Other on-line soft-sensing methods include ultrasound transit time measurements (Barnes et al., 2003 and Chen et al., 1999), X-ray scattering (Albano et al., 2003, Pantani et al., 2005 and Stark and Matuana, 2007), fluorescence spectroscopy (Barnes et al., 2003), and nuclear magnetic resonance (NMR) spectroscopy (Bergmann, 1981 and Pelsoci, 2007). According to Barnes et al. (2003), the polymer industry has so far mainly applied spectroscopic methods in either off-line or near-line (e.g. pellet composition) applications. Nevertheless, several sample properties have now been investigated on-line. These include estimation of the melt viscosity (Broadhead et al., 1993, Hansen and Vedula, 1998, Merikoski et al., 2001 and McAfee and McNally, 2006), yield stress (Broadhead et al., 1993), polymer density (Watari et al., 1996), composition (Barnes et al., 2003, Hansen and Vedula, 1998 and Rohe et al., 1999), extrudate temperature (Chen et al., 1999) and surface chemistry (Gupta et al., 2007 and Stark and Matuana, 2007). However, most sensing methods are based on single point or averaged measurements. Estimating sample quality distribution over a larger area using these approaches is difficult to perform on a high-speed production line. At best, a coarse spatial coverage of the surface can be achieved using probe arrays. Nevertheless, fine spatial measurements greatly enhance the probability of identifying local weaknesses that may compromise the quality of the whole. The mechanical, optical and barrier properties of an entire sample may fall below specifications because of local discrepancies that may be overlooked by a coarse spatial analysis. Historically, modelling the open-loop response of a plasticating extrusion process can be traced back to the 1970 s. During this period, research aimed at proposing relationships between screw speed, die pressure, extrudate flowrate and melt temperature (Reber et al., 1973 and Tadmor et al., 1974). Later, work was done on the dynamics and control of the extruder pressure in cases where variations in feed quality and feed rates were present (Akdogan and Rumsey, 1996, Costin et al., 1982 and Chan et al., 1986). More recently, Mudalamane and Bigio (2003) studied the transmission of external disturbances through the extruder whereas McAfee and McNally (2006) determined the extruder dynamics using the melt viscosity. More complex modelling techniques were also applied to the extrusion process, for example using finite element methods (Bajimaya et al., 2007, Ha et al., 2008 and Yuan et al., 1994), artificial neural networks (Shihani, Kumbhar, & Kulshreshtha, 2006) and fuzzy logic (Fodil-Pacha, Arhaliass, Aït-Ahmed, Boillereaux, & Legrand, 2007). This work investigates a new machine vision approach for on-line monitoring of product quality obtained by an extrusion process. On-line visible-NIR spectral imaging is used for rapid and non-destructive detection of spatio-temporal variations in the polymer properties in far greater detail than spectroscopic probes or probe arrays may achieve. Furthermore, rich spatial data would also be useful for precise diagnostic of operational problems in the production line. The proposed methodology uses chemometrics methods for extracting the spatial and spectral features that are most highly correlated with the material properties, and use this information to predict the properties of samples unknown to the model. To illustrate the concepts, the proposed techniques will be applied to the production of extruded wood/plastic composites (WPC). The rational behind this approach is twofold: (1) WPCs are complex multiphase systems that are not as well understood and controlled as neat polymers and (2) the production of WPCs has been increasing steadily in response to growing concerns over waste plastic management. In fact, the production of WPCs quadrupled between 1997 and 2000 (Li & Wolcott, 2004) and is expected to reach $2.4 billion US by 2011 (Wrap, 2003). Nevertheless, these methods are not specific to WPCs. They are intended for any product that may be distinguished by its spectral and/or spatial surface characteristics.

The objective of this work was to develop a rapid and non-intrusive on-line imaging sensor for monitoring spatio-temporal variations in quality across the surface of thin polymer composite materials. This paper discusses the ability of chemometrics methods, to extract relevant spectral and textural information from the visible/NIR spectral images and link it to sample quality. On one hand, the spectral signature of a sample reflects its chemical composition and small-scale physical structure. The significant wavelength intervals included in the model were computed using a PLS-bootstrap based method previously developed by Gosselin et al. (2010). On the other hand, the spatial information (visual texture) represents large-scale variations throughout the sample. It was quantified through the Grey Level Co-occurrence Matrix (GLCM) algorithm, a common, simple and effective texture analysis method. The proposed approach was tested on extruded wood plastic composites. These samples were produced under conditions varying in barrel temperature, screw speed, throughput rate and wood content. Several properties were quantified: enthalpy of fusion, modulus, stress at yield and at break, strain at yield and at break as well as the energy at break. Overall, 11 steady-state samples were produced to build the PLS regression model. The model was subsequently used to predict the quality of samples produced while changing from one steady-state condition to another (transient state). The results show that the proposed methodology can (1) distinguish between the quality of the product obtained under the 11 sets of steady-state operating conditions, (2) predict the 7 quality variables of the samples in both the steady-states and the transition states, (3) estimate the extrusion dynamics, and (4) provide an early detection scheme for undesired changes in feed composition (e.g. wood content) as well as in the severity of the thermo-mechanical energy delivered to the systems, which may lead to degradation in product quality. It is believed that such a spectral imaging sensor can provided valuable information for establishing an on-line product quality control strategy for the polymer processing industry.