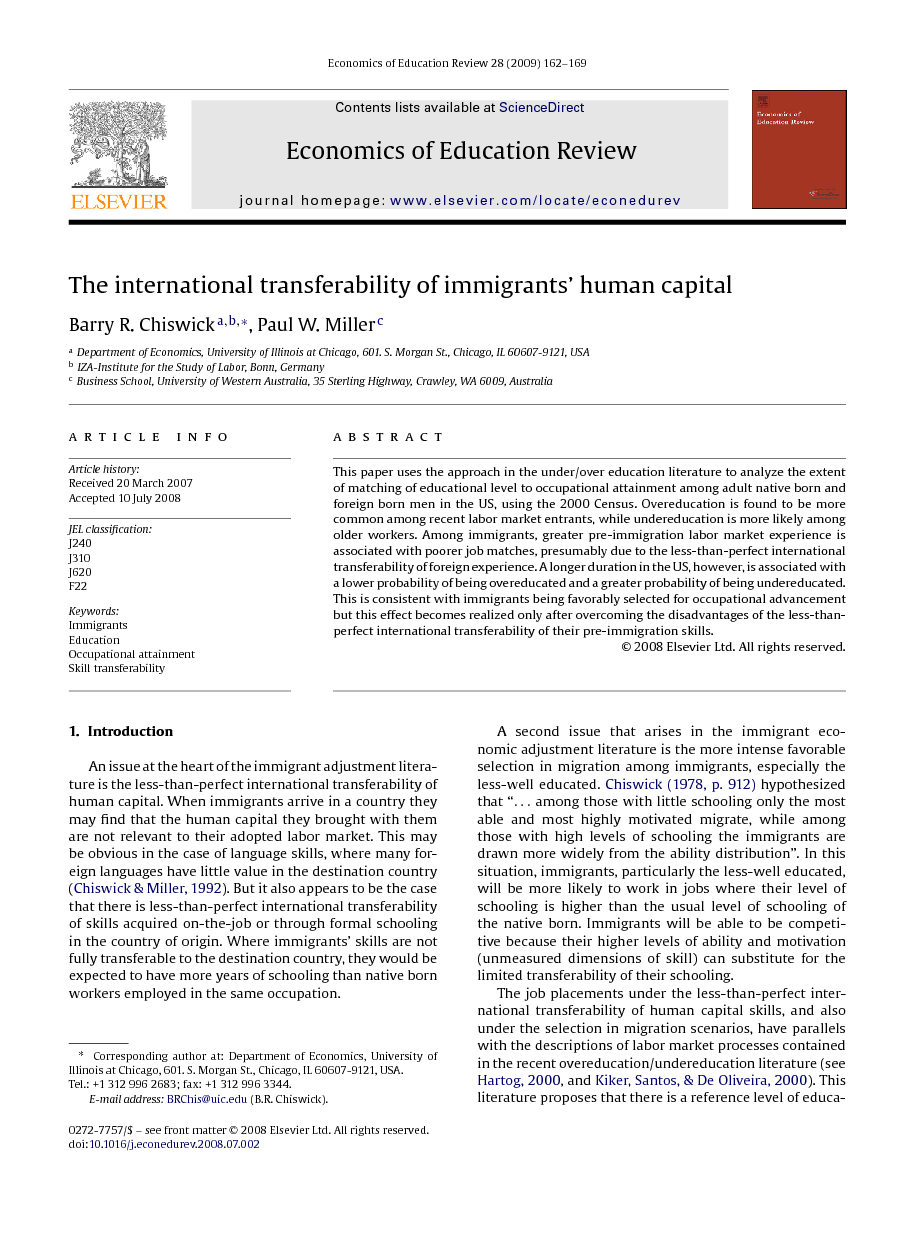 This paper uses the approach in the under/over education literature to analyze the extent of matching of educational level to occupational attainment among adult native born and foreign born men in the US, using the 2000 Census. Overeducation is found to be more common among recent labor market entrants, while undereducation is more likely among older workers. Among immigrants, greater pre-immigration labor market experience is associated with poorer job matches, presumably due to the less-than-perfect international transferability of foreign experience. A longer duration in the US, however, is associated with a lower probability of being overeducated and a greater probability of being undereducated. This is consistent with immigrants being favorably selected for occupational advancement but this effect becomes realized only after overcoming the disadvantages of the less-than-perfect international transferability of their pre-immigration skills.

An issue at the heart of the immigrant adjustment literature is the less-than-perfect international transferability of human capital. When immigrants arrive in a country they may find that the human capital they brought with them are not relevant to their adopted labor market. This may be obvious in the case of language skills, where many foreign languages have little value in the destination country (Chiswick & Miller, 1992). But it also appears to be the case that there is less-than-perfect international transferability of skills acquired on-the-job or through formal schooling in the country of origin. Where immigrants’ skills are not fully transferable to the destination country, they would be expected to have more years of schooling than native born workers employed in the same occupation. A second issue that arises in the immigrant economic adjustment literature is the more intense favorable selection in migration among immigrants, especially the less-well educated. Chiswick (1978, p. 912) hypothesized that “… among those with little schooling only the most able and most highly motivated migrate, while among those with high levels of schooling the immigrants are drawn more widely from the ability distribution”. In this situation, immigrants, particularly the less-well educated, will be more likely to work in jobs where their level of schooling is higher than the usual level of schooling of the native born. Immigrants will be able to be competitive because their higher levels of ability and motivation (unmeasured dimensions of skill) can substitute for the limited transferability of their schooling. The job placements under the less-than-perfect international transferability of human capital skills, and also under the selection in migration scenarios, have parallels with the descriptions of labor market processes contained in the recent overeducation/undereducation literature (see Hartog, 2000, and Kiker, Santos, & De Oliveira, 2000). This literature proposes that there is a reference level of education for each job. Some workers may, however, be employed in jobs where their actual level of education diverges from this reference level, either because they are overeducated (i.e., have surplus education compared to the reference level), or undereducated (i.e., have a measured education deficiency compared with the reference level). In this context, immigrants, predominantly the better educated, whose human capital skills have not been fully transferable to the labor market of the destination country, will be categorized as overeducated. Those immigrants, predominantly the less-well educated, who work in jobs where the usual level of schooling is greater than their particular level of schooling, will be categorized as undereducated. In this paper the perspectives of the overeducation/undereducation literature are applied to offer a comparative assessment of the occupational distributions of immigrants and the native born. Section 2 provides a brief overview of the overeducation/undereducation literature, and outlines how the concepts can be modified for the study of immigrants’ labor market outcomes. Section 3 presents descriptive statistics on the adult male labor market, based on the 2000 US Census. The central focus of Section 4 is a multinomial logit model of the determination of the distribution of workers across “overeducated”, “undereducated” and “correctly matched” categories. This model is estimated separately for adult male immigrants and the native born. Differences across major birthplace groups among the foreign born are also discussed. Section 5 offers a summary and conclusion.

The results in Table 3, together with the predictions displayed in Table 4 and Table 5, show that among the native born and the foreign born the incidence of overeducation, undereducation, and being correctly matched to the requirements of the job vary with workers’ characteristics in the US labor market in 2000. Overeducation is more likely among recent labor market entrants, and undereducation is more likely among older members of the workforce. There is a marked inverse relationship between pre-immigration labor market experience and the likelihood of being correctly matched to the skill requirements of the job. This presumably reflects uncertainties on the part of US employers over the value of skills acquired on-the-job in foreign countries. This difference in the impacts of pre- and post-immigration labor market experience among the foreign born is intuitively reasonable, and accords with discussion of immigrant adjustment in Chiswick (1978) and elsewhere. In particular, due to the less-than-perfect international transferability of human capital, there is less successful job matching of a foreign born worker's skills the longer they have worked in the country of origin prior to immigration. After arrival in America, however, workers tend to move into jobs that require higher skill levels than indicated by the immigrant's level of schooling. The destination-specific skills that immigrants acquire in the US presumably substitute for formal schooling levels to enable the immigrant to perform satisfactorily in the job. This presumably arises from the favorable selectivity of immigrants for success in the destination labor market that enables them, after a period of adjustment, to be employed in occupations in which the native born tend to have a higher level of schooling. The educational mismatch is most intense for immigrants from the former Soviet Union (highly educated and highly overeducated given their jobs) and Mexico (low education and greatly undereducated given their jobs).