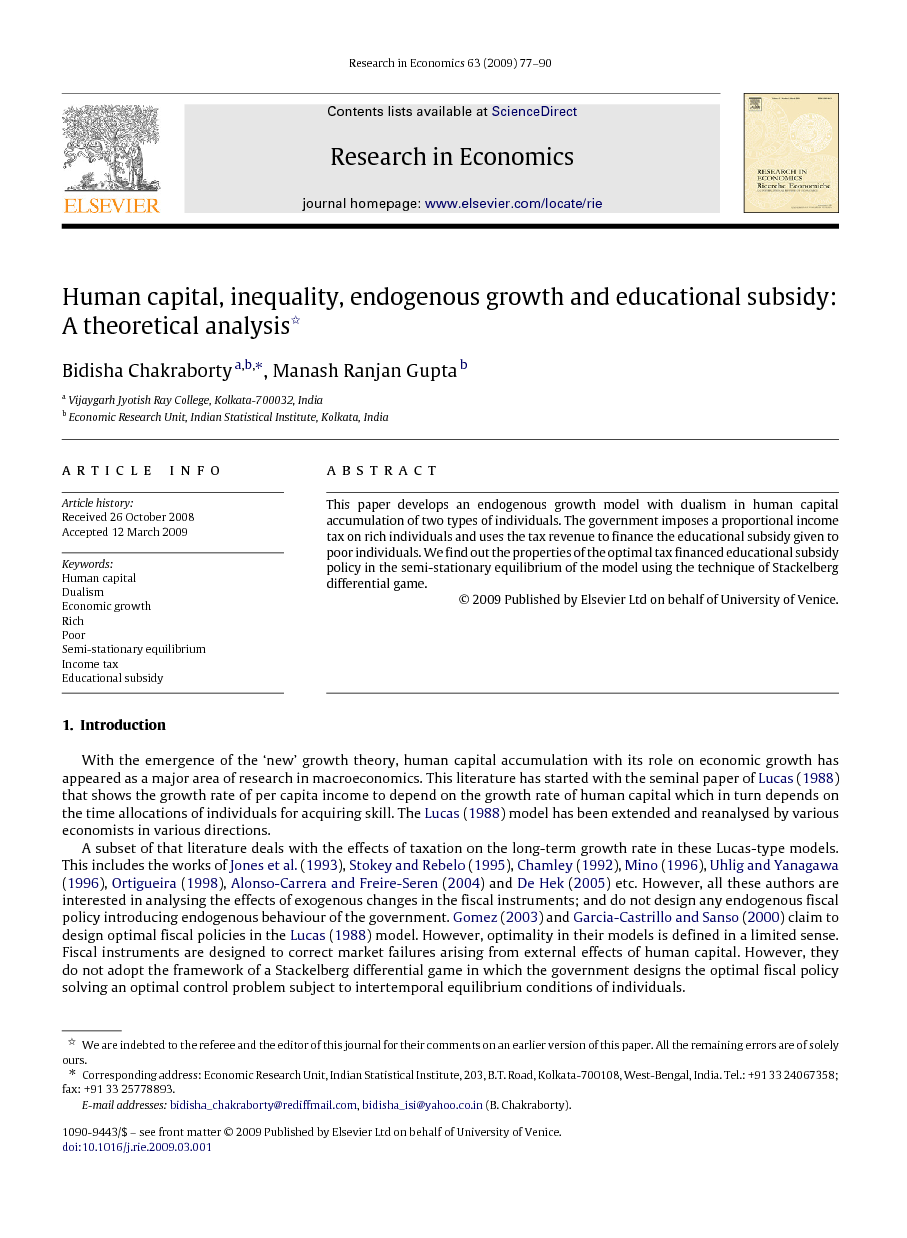 This paper develops an endogenous growth model with dualism in human capital accumulation of two types of individuals. The government imposes a proportional income tax on rich individuals and uses the tax revenue to finance the educational subsidy given to poor individuals. We find out the properties of the optimal tax financed educational subsidy policy in the semi-stationary equilibrium of the model using the technique of Stackelberg differential game.

Existing endogenous growth models dealing with human capital accumulation do not consider dualism in the human capital formation among different groups of individuals. This paper attempts to develop a theoretical model of endogenous growth involving redistributive income taxation and educational subsidy to build up human capital of individuals belonging to the less privileged sections of the society. Here we analyse the model of an economy in which dualism exists in the nature of human capital accumulation of two types of individuals. The government imposes a proportional tax on the income of rich individuals and uses that tax revenue to finance the educational subsidy given to poor individuals. The optimal tax financed subsidy rate is found out solving a Stackelberg differential game with government being the leader. We derive some interesting theoretical properties of this optimal tax financed educational subsidy policy. It appears to be optimal to adopt such a policy in the semi-stationary equilibrium of this model. This optimal tax financed educational subsidy rate varies negatively with the relative social welfare weight given to the consumption of the poor individual and with the learning ability of that individual. However, this tax rate varies positively with the learning ability of the rich individual and negatively with the consumption rate of discount. The degree of inequality in human capital (income) in the long-run equilibrium varies positively with the relative social welfare weight given to the consumption of the rich individual and varies negatively with the the learning ability of the representative poor individual and degree of effectiveness of the training programme. The government of India has given special emphasis on the subsidized general education programme and special training programmes for people belonging to scheduled castes and scheduled tribes. Majority of them are economically backward. The fruitfulness of this policy is subject to a lot of debates among intellectuals. The present paper points out some theoretical justifications behind this policy. The model, in this paper, does not consider many important features of less developed countries. The accumulation of physical capital is ruled out; and there is no justification of this apart from the weak excuse of technical simplicity. The present model does not consider many other problems of a dual economy e.g. unemployment of labour, market imperfections etc. There is no exchange or socio-economic relation between two groups of individuals. Technical complications prevent us from analysing the transitional dynamic properties of the model. Our purpose is to focus on the dualism in the human capital accumulation in a less developed economy and to analyse the properties of optimal educational subsidy policy in this context. In order to keep the analysis otherwise simple, we do all kinds of abstraction—a standard practice often followed in the theoretical literature.