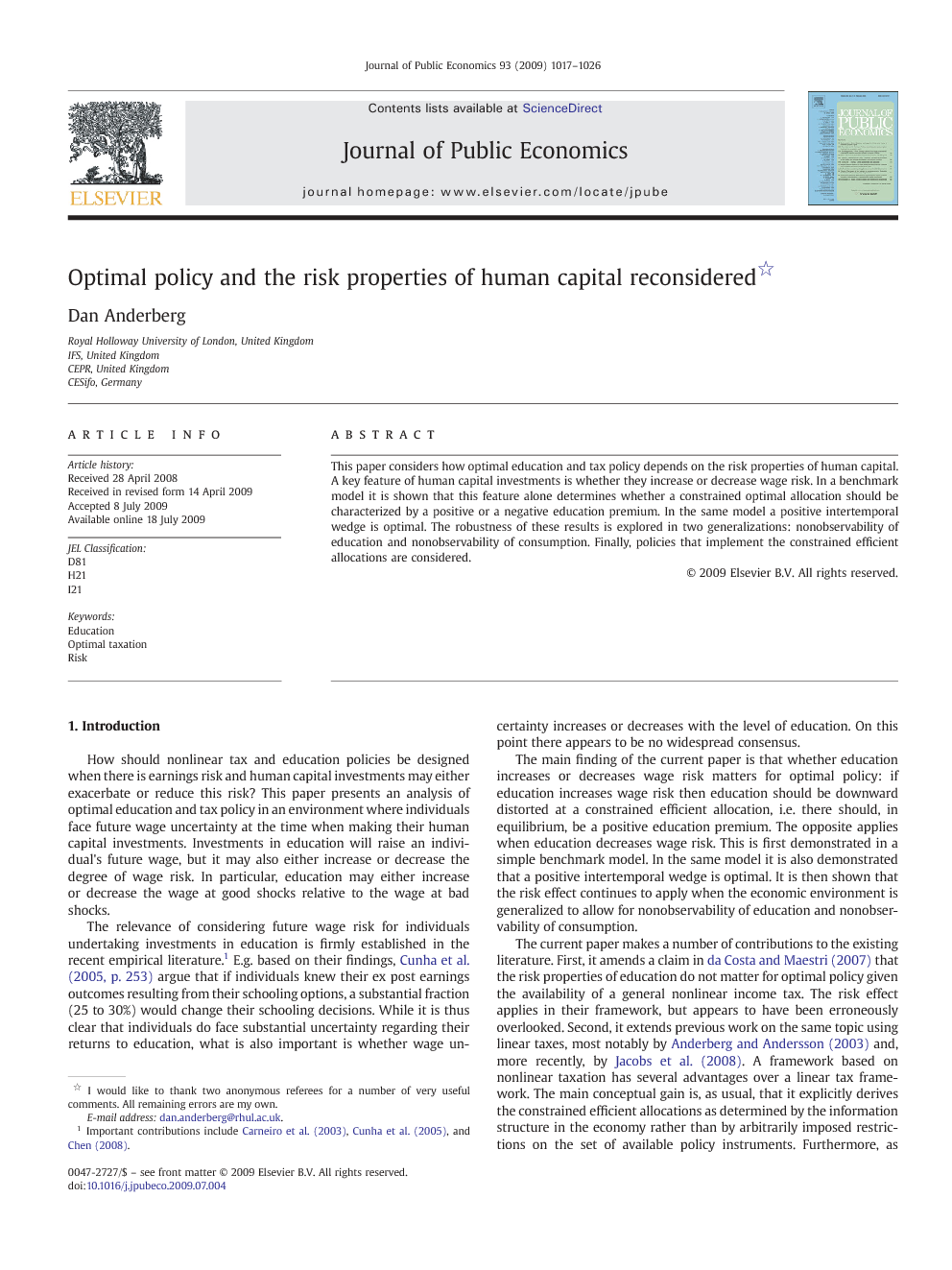 This paper considers how optimal education and tax policy depends on the risk properties of human capital. A key feature of human capital investments is whether they increase or decrease wage risk. In a benchmark model it is shown that this feature alone determines whether a constrained optimal allocation should be characterized by a positive or a negative education premium. In the same model a positive intertemporal wedge is optimal. The robustness of these results is explored in two generalizations: nonobservability of education and nonobservability of consumption. Finally, policies that implement the constrained efficient allocations are considered.

This paper has considered the optimal design of education and redistributive policies in an environment where individuals invest in education and face idiosyncratic wage risk. We paid particular attention to three questions. The first question was whether there should optimally be a positive or negative education premium. We showed that the optimal education premium depends on whether education increases or decreases wage risk. This finding was found to be robust to the potential existence of a hidden market where individuals can retrade consumption intertemporally. When education is not observable the relationship between education and wage risk still play a key role; however, the nonobservability of education also causes a second generic downward distortion in the efficient level of human capital investments. The second question was whether, at the constrained efficient allocation, there should be a positive intertemporal wedge. Here we found that there should, in all cases, be a positive wedge; however, the structure and size of the wedge will in general depend on the exact environment. E.g. nonobservability of education strengthens the case for a positive intertemporal wedge since it lowers the private marginal cost of investing in human capital. Finally, we considered what type of policy can implement a constrained efficient allocation. It was shown that, in all cases, some strong form of policy is required, e.g. a minimum education policy or an asset test. One main message of the current paper is thus that the empirical risk properties of education play a key role for optimal education/tax policy. These risk properties are the focus of current empirical research. Hence in future research we hope to combine theoretical models of the type presented here with the growing empirical evidence in order to obtain empirically-based policy prescriptions. However, doing so also requires extending theory to allow for both uncertainty and heterogeneity, a task that poses a significant challenge.