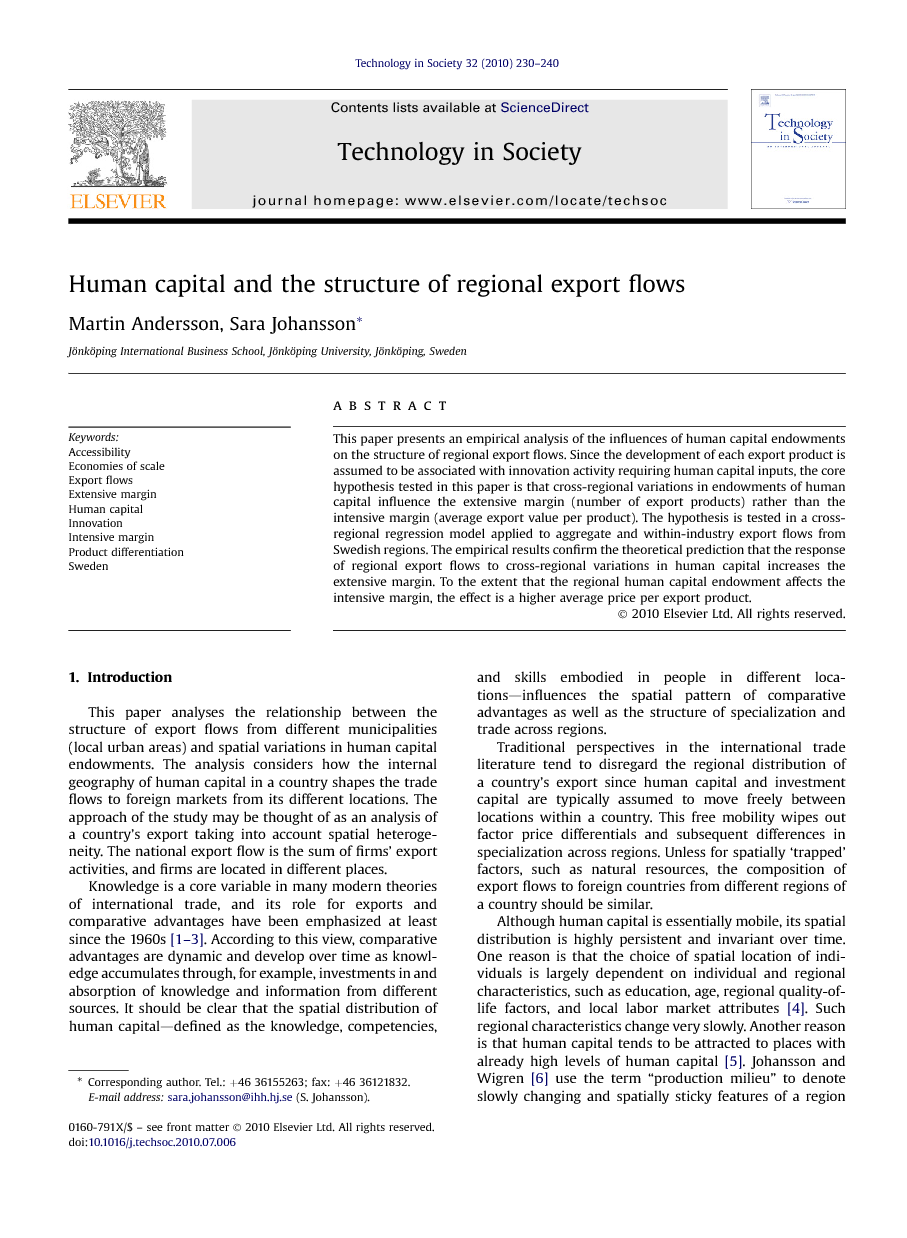 This paper analyses the relationship between the structure of export flows from different municipalities (local urban areas) and spatial variations in human capital endowments. The analysis considers how the internal geography of human capital in a country shapes the trade flows to foreign markets from its different locations. The approach of the study may be thought of as an analysis of a country’s export taking into account spatial heterogeneity. The national export flow is the sum of firms’ export activities, and firms are located in different places. Knowledge is a core variable in many modern theories of international trade, and its role for exports and comparative advantages have been emphasized at least since the 1960s [1], [2] and [3]. According to this view, comparative advantages are dynamic and develop over time as knowledge accumulates through, for example, investments in and absorption of knowledge and information from different sources. It should be clear that the spatial distribution of human capital—defined as the knowledge, competencies, and skills embodied in people in different locations—influences the spatial pattern of comparative advantages as well as the structure of specialization and trade across regions. Traditional perspectives in the international trade literature tend to disregard the regional distribution of a country’s export since human capital and investment capital are typically assumed to move freely between locations within a country. This free mobility wipes out factor price differentials and subsequent differences in specialization across regions. Unless for spatially ‘trapped’ factors, such as natural resources, the composition of export flows to foreign countries from different regions of a country should be similar. Although human capital is essentially mobile, its spatial distribution is highly persistent and invariant over time. One reason is that the choice of spatial location of individuals is largely dependent on individual and regional characteristics, such as education, age, regional quality-of-life factors, and local labor market attributes [4]. Such regional characteristics change very slowly. Another reason is that human capital tends to be attracted to places with already high levels of human capital [5]. Johansson and Wigren [6] use the term “production milieu” to denote slowly changing and spatially sticky features of a region that influence production and specialization opportunities. Human capital in a region is one such feature. It may be obvious that the geographic distribution of human capital plays a fundamental role in shaping spatial patterns with regard to comparative advantages, specialization, and export market performance [7]. Less clear, however, is what way regional endowments of human capital influence regional export. What components of regional export flows reflect the fact that human capital endowments differ between regions? This analysis focuses on supply-side influences on export flows and asks the question how export flows from municipalities that are well endowed with human capital differ from export flows from other municipalities. With the objective of analyzing this question, the study contributes to the literature in two respects: (1) focusing on human capital, it presents empirical evidence of the role of regional supply-side factors for understanding the internal geography of a country’s aggregate exports; and (2) the paper contributes to the literature on how different margins in trade flows adjust to variations in supply-side factors. This study follows Hummels and Klenow [8], who inquire into how large countries export more than small countries, by distinguishing between different margins of trade flows. Specifically, we make a distinction between intensive margin (exports per product) and extensive margin (number of products). The intensive margin is further divided into one price and one volume component.1 The empirical analysis is designed to reveal the contribution of each margin to the overall relationship between exports and human capital across regions. Theoretical arguments from the literature on innovation and product life cycles stress that the level of human capital in a region and the potential for knowledge flows should be associated primarily with the extensive margin of trade, i.e., the number of exported product varieties and the average quality of the exported goods. The extensive margin of a region’s aggregate export flow is assumed to reflect the number of product varieties developed by firms located in that region. The development of each is assumed to be associated with innovation activity that requires input from human capital. The basic conjecture is that environments with a richness and density of human capital are conducive to ideas for product varieties (e.g., through knowledge flows). Thus, at any point in time, the product varieties of a region reflect the stock of realized “innovation ideas” [9]. Regions with abundant human capital can also offer accessibility to sufficient human capital to realize such ideas. Moreover, high-quality products can be assumed to include more knowledge content and human capital than other products. Therefore, we expect that regions that are well endowed with human capital can specialize in and export high-quality products. For a given sector in a region, this is assumed to apply to the influence of the human capital employed in the given sector and other sectors. Making use of detailed export data, cross-tabulated on sectors and municipalities, our empirical results confirm both hypotheses. The remainder of the paper is organized as follows: The next section presents the theoretical background and discusses previous empirical results in related research. Section 3 presents the empirical strategy for analyzing how regional variations in human capital endowment affect the structure of regional export flows. The results of the econometric estimations are presented and discussed in Section 4, followed by conclusions in Section 5.

Larger municipalities with well-endowed human capital are expected to have larger export flows. In this paper, we asked: how do they export more? Previous research analyzed this question for exports of varying sized countries. This analysis examines the contribution of different components (i.e., the intensive and extensive margin) of exports across municipalities in Sweden. Instead of focusing on how the different components of export flows vary with size, however, our analysis focused on how they vary with spatial variations in endowment of human capital, including the potential for spatial knowledge flows. The basic hypothesis was that extensive margin is driven by innovative efforts, and these efforts require human capital. Regions rich in human capital are, therefore, better equipped to produce differentiated products. At the aggregate level, our analysis yields the following results: • Larger municipalities have larger export flows. The elasticity of export flows with respect to a size variable (total employment) can be attributed to both the intensive and extensive margins. Export prices are negatively related to municipality size, whereas export quantities are positively related to the size variable. • In line with our expectations, the elasticity of export flows with respect to accessibility to human capital is due solely to adjustments of the extensive margin. Also, average unit prices of exported product varieties are higher in municipalities with higher accessibility to human capital. These results at the aggregate level reflect different industry structures in different regions, e.g., human capital-intensive regions can be more specialized in sectors characterized by differentiated products as well as differences within industries across regions. Our within-industry analyses show that industries in regions that are well endowed with human capital have a more diversified export flow, and consist of goods of relatively higher unit value. They also show that human capital employed in other sectors correlates significantly with the extensive margin and export prices in given sectors. Based on these findings, this paper contributes to the literature in two major respects. First, focusing on human capital, it presents empirical evidence of the role of regional supply-side characteristics for understanding the internal geography of a country’s aggregate exports. Second, the paper contributes to the literature on how different margins of trade adjust to supply-side factors. Specifically, the paper addresses how endowments of human capital influence trade flows. In relation to previous research, this paper shows that the relationship between exports and human capital at the regional level goes beyond specialization patterns (e.g., as indicated by RCA indices), and also comprises variations in the extensive and intensive margins as well as prices and quantities. They show that the structure of a region’s export flows is highly related to its production milieu in terms of accessibility to human capital. The ability of industries to differentiate their products (horizontally and vertically), and to achieve the associated competitive advantages from such differentiation, appears to be strongly related to access to human capital in other sectors in their own region. How the co-location of different economic activities stimulates the arrival of new products, and expansions of regional export bases would be an important issue for further research.