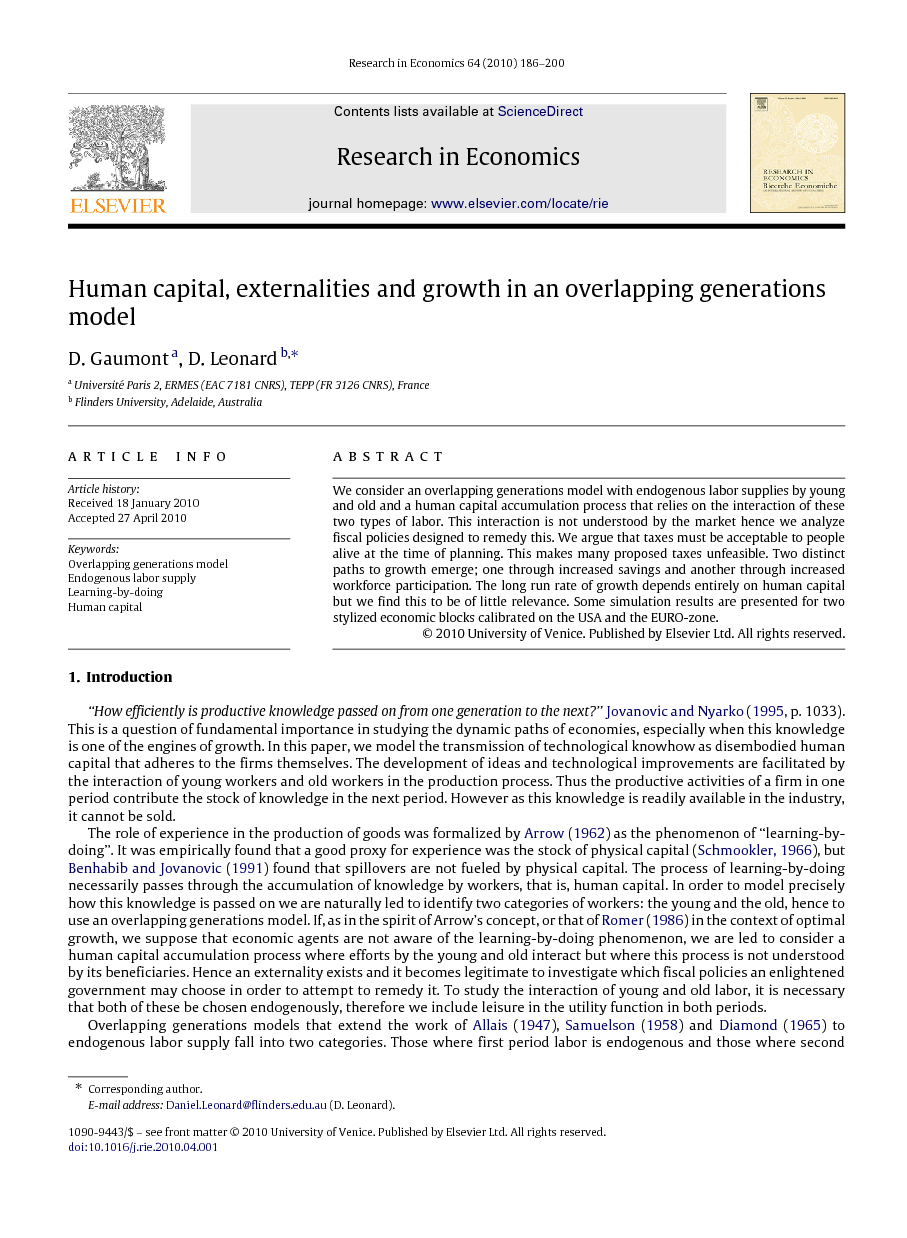 We consider an overlapping generations model with endogenous labor supplies by young and old and a human capital accumulation process that relies on the interaction of these two types of labor. This interaction is not understood by the market hence we analyze fiscal policies designed to remedy this. We argue that taxes must be acceptable to people alive at the time of planning. This makes many proposed taxes unfeasible. Two distinct paths to growth emerge; one through increased savings and another through increased workforce participation. The long run rate of growth depends entirely on human capital but we find this to be of little relevance. Some simulation results are presented for two stylized economic blocks calibrated on the USA and the EURO-zone.

“How efficiently is productive knowledge passed on from one generation to the next?” Jovanovic and Nyarko (1995, p. 1033). This is a question of fundamental importance in studying the dynamic paths of economies, especially when this knowledge is one of the engines of growth. In this paper, we model the transmission of technological knowhow as disembodied human capital that adheres to the firms themselves. The development of ideas and technological improvements are facilitated by the interaction of young workers and old workers in the production process. Thus the productive activities of a firm in one period contribute the stock of knowledge in the next period. However as this knowledge is readily available in the industry, it cannot be sold. The role of experience in the production of goods was formalized by Arrow (1962) as the phenomenon of “learning-by-doing”. It was empirically found that a good proxy for experience was the stock of physical capital (Schmookler, 1966), but Benhabib and Jovanovic (1991) found that spillovers are not fueled by physical capital. The process of learning-by-doing necessarily passes through the accumulation of knowledge by workers, that is, human capital. In order to model precisely how this knowledge is passed on we are naturally led to identify two categories of workers: the young and the old, hence to use an overlapping generations model. If, as in the spirit of Arrow’s concept, or that of Romer (1986) in the context of optimal growth, we suppose that economic agents are not aware of the learning-by-doing phenomenon, we are led to consider a human capital accumulation process where efforts by the young and old interact but where this process is not understood by its beneficiaries. Hence an externality exists and it becomes legitimate to investigate which fiscal policies an enlightened government may choose in order to attempt to remedy it. To study the interaction of young and old labor, it is necessary that both of these be chosen endogenously, therefore we include leisure in the utility function in both periods. Overlapping generations models that extend the work of Allais (1947), Samuelson (1958) and Diamond (1965) to endogenous labor supply fall into two categories. Those where first period labor is endogenous and those where second period workers retire (see for instance Ordover, 1976, Flemming, 1977, Phelps and Riley, 1978 and Park, 1991). Other models assume that labor is inelastically supplied in the first period and endogenously chosen in the second (for instance Hu, 1979 or Crettez and Le Maitre, 2002). This allows the analysis of the effects of superannuation schemes on retirement behavior. However these authors only consider the system in the steady-state. Kohn and Marion (1992) point out that overlapping generation models are particularly suited to the analysis of the externality that forms the core of our model. It allows for endogenous savings and, in our model, the endogenous supply of labor. Our model is close in spirit to the third model of Lucas (1988, p. 27) where the time spent producing a consumption good also contributes to the accumulation of human capital useful in the production of that good. Lucas calls it a learning-by-doing process. Jovanovic and Nyarko (1995) also argue that learning-by-doing takes place on the factory floor when young and old work together. Although they recognize that this process is plagued by inefficiencies they allow the young to purchase training from the old whereas we do not, arguing that the knowledge will be readily available in the next period. Bottazzi and Peri (2003) also consider that existing ideas are a public (not private) input into the process of generating new ideas, hence not purchasable. Iqbal and Turnovski (2008) study optimal capital and labor income taxes when the benefits of public goods are age-dependent. There, government sets its expenditures in each generation as specified fractions of output. A uniform taxation of labor across generations, with an equal consumption subsidy, allows the planner to reach the first-best allocation of resources with a zero tax on capital. They also consider policies where a consumption tax is not an option. Our model goes beyond these papers in several ways: we allow for endogenous labor choice in both periods thereby permitting the analysis of the impact of taxes on labor supply; the labor of young and old are substitutes in both physical production and the accumulation of human capital. The main features of our model are as follows. The interaction of young and old in the formation of human capital requires an overlapping generations structure. This interaction is not perceived by the interested parties and generates an externality, thus providing scope for a corrective fiscal scheme. The endogenous nature of the labor supply allows for taxes and subsidies to influence it, hence the accumulation of human capital. Some of the following results are of particular interest. The long run rate of growth is shown to be entirely dependent on the human capital accumulation process. However this turns out to be true only for the very long run (several centuries). In the short or medium term, growth in physical capital plays the dominant role in the case where the externality commands to tax the old. In the other case human capital accumulation again dominates. Therefore we identify two distinct paths to improved performance, depending on the relative strength of the contribution of young or old to human capital accumulation. Policies that attempt to maximize the long run rate of growth are shown to be undesirable because they requires drastic reductions in standard of living for earlier generations. The paper is organized as follows. Section 2 presents the basic model. Section 3 analyzes the dynamic equilibrium path with taxes. Section 4 briefly examines alternative modeling of human capital accumulation, Section 5 discusses planning criteria, Section 6 provides some simulations for three typical examples and Section 7 offers some concluding comments.

We have analyzed the impact of endogenous workforce participation by young and old workers on the accumulation of human capital. In this model, paying workers the value of their marginal physical product is a reward system that might be improved upon because while they work together young and old modify the stock of human capital to be available in the next period, but are not rewarded for it. We devised a tax/subsidy scheme on wages and solved for the dynamic equilibrium path. Taxes affect the rates of growth and the levels of all variables. Except for labor supplies (which are constant) and the interest rate, all variables including wages grow at the same rate as output. In the long run this rate is determined by the human capital accumulation process, hence workers’ participation. This is a standard result but we find that its significance is overstated in this model because maximizing the long run growth rates very poorly in many respects. Simulation exercises for two versions of the model, each calibrated on a large industrialized economic block, have been carried out. •In selecting and evaluating policies we have deemed them to be politically feasible only if they provide a higher aggregate utility for people alive at the time of planning. Many policies are thus rejected. •The criteria used to select a tax policy are discounted aggregate utilities over several generations, with various horizons. We find that a 20-generation horizon criterion is a very good approximation to infinity for the choice of taxes, but that more sensible shorter horizons (30 or 60 years) yield very different results. •Attempting to maximize the long run tax rate is always politically unfeasible, never desirable and always dominated by another policy. Therefore the proven fact that human capital accumulation alone determines the long run growth rate of the economy loses much of its appeal. •Taxes either favoring young workers or old workers can very significantly improve the performance of the economy, in the short, medium or long term. The simulations have shown that economies with different rates of contribution by young and old to the accumulation of human capital require very different taxes. Therefore a good knowledge of their rates of contribution is crucial for setting taxes; it is not just the relative values of their contribution which is important, but their actual values. •Two distinct mechanisms influence the way taxes operate. Subsidizing the young results in increased savings, hence in increased capital stock. This increase is effective from the next period, but reduces old workers participation, often substantially, with the effect of reducing the accumulation of human capital which, over the generations undermines productivity and output. Taxing the young has the opposite effect. Our simulations show that understanding this basic mechanism is not sufficient to predict the effect of taxes. Depending on whether the young are well paid or not to start with, the impact of a subsidy to them will have different consequences. Whether the accumulation of human capital is strongly dependent on the participation of old workers will also determine the impact of taxes. Therefore although our model is essentially theoretical, it does make the point that empirical studies are needed to assess these contributions if any beneficial fiscal scheme is to be designed.