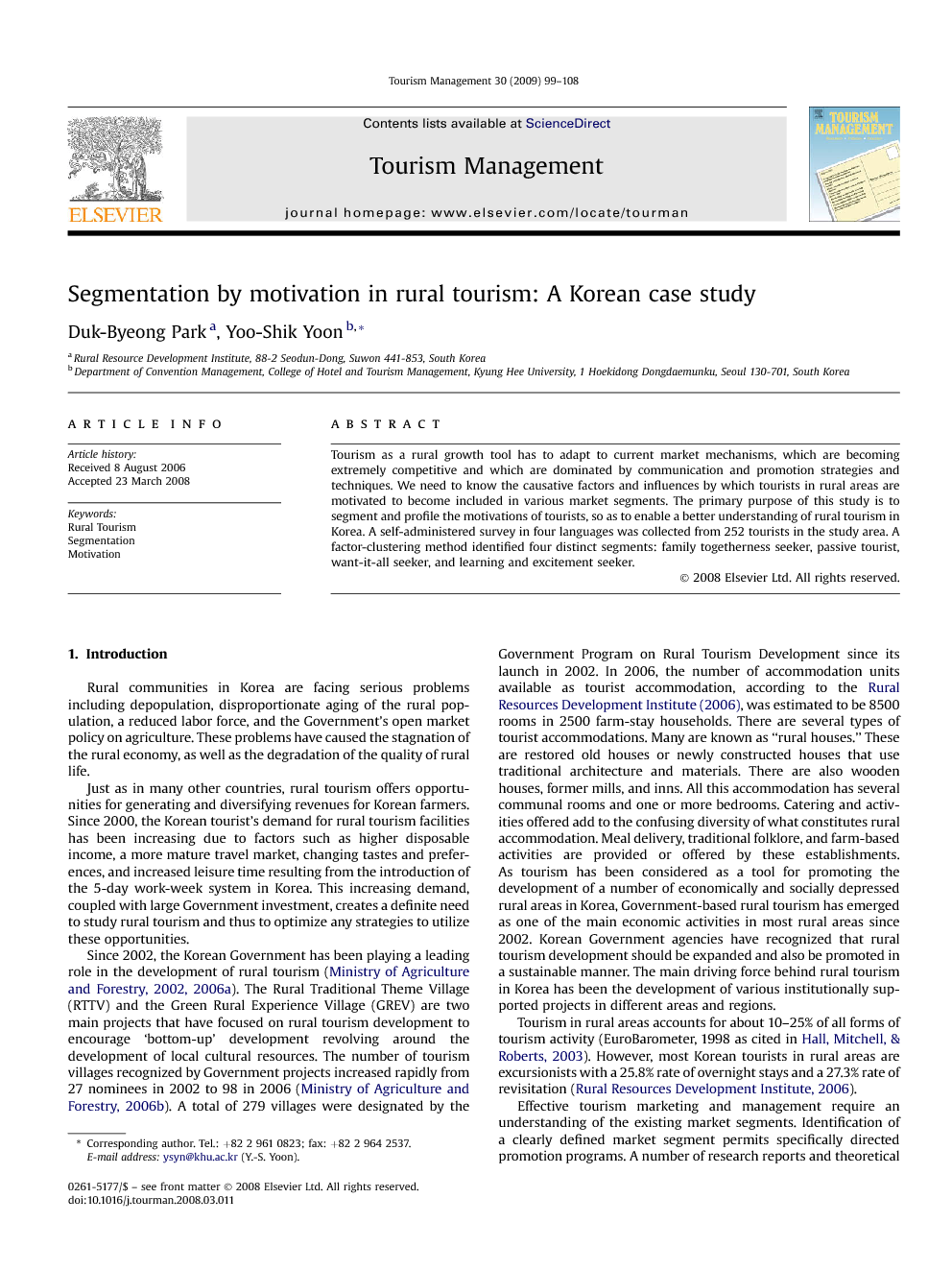 Tourism as a rural growth tool has to adapt to current market mechanisms, which are becoming extremely competitive and which are dominated by communication and promotion strategies and techniques. We need to know the causative factors and influences by which tourists in rural areas are motivated to become included in various market segments. The primary purpose of this study is to segment and profile the motivations of tourists, so as to enable a better understanding of rural tourism in Korea. A self-administered survey in four languages was collected from 252 tourists in the study area. A factor-clustering method identified four distinct segments: family togetherness seeker, passive tourist, want-it-all seeker, and learning and excitement seeker.

Rural communities in Korea are facing serious problems including depopulation, disproportionate aging of the rural population, a reduced labor force, and the Government's open market policy on agriculture. These problems have caused the stagnation of the rural economy, as well as the degradation of the quality of rural life. Just as in many other countries, rural tourism offers opportunities for generating and diversifying revenues for Korean farmers. Since 2000, the Korean tourist's demand for rural tourism facilities has been increasing due to factors such as higher disposable income, a more mature travel market, changing tastes and preferences, and increased leisure time resulting from the introduction of the 5-day work-week system in Korea. This increasing demand, coupled with large Government investment, creates a definite need to study rural tourism and thus to optimize any strategies to utilize these opportunities. Since 2002, the Korean Government has been playing a leading role in the development of rural tourism (Ministry of Agriculture and Forestry, 2002 and Ministry of Agriculture and Forestry, 2006a). The Rural Traditional Theme Village (RTTV) and the Green Rural Experience Village (GREV) are two main projects that have focused on rural tourism development to encourage ‘bottom-up’ development revolving around the development of local cultural resources. The number of tourism villages recognized by Government projects increased rapidly from 27 nominees in 2002 to 98 in 2006 (Ministry of Agriculture and Forestry, 2006b). A total of 279 villages were designated by the Government Program on Rural Tourism Development since its launch in 2002. In 2006, the number of accommodation units available as tourist accommodation, according to the Rural Resources Development Institute (2006), was estimated to be 8500 rooms in 2500 farm-stay households. There are several types of tourist accommodations. Many are known as “rural houses.” These are restored old houses or newly constructed houses that use traditional architecture and materials. There are also wooden houses, former mills, and inns. All this accommodation has several communal rooms and one or more bedrooms. Catering and activities offered add to the confusing diversity of what constitutes rural accommodation. Meal delivery, traditional folklore, and farm-based activities are provided or offered by these establishments. As tourism has been considered as a tool for promoting the development of a number of economically and socially depressed rural areas in Korea, Government-based rural tourism has emerged as one of the main economic activities in most rural areas since 2002. Korean Government agencies have recognized that rural tourism development should be expanded and also be promoted in a sustainable manner. The main driving force behind rural tourism in Korea has been the development of various institutionally supported projects in different areas and regions. Tourism in rural areas accounts for about 10–25% of all forms of tourism activity (EuroBarometer, 1998 as cited in Hall, Mitchell, & Roberts, 2003). However, most Korean tourists in rural areas are excursionists with a 25.8% rate of overnight stays and a 27.3% rate of revisitation (Rural Resources Development Institute, 2006). Effective tourism marketing and management require an understanding of the existing market segments. Identification of a clearly defined market segment permits specifically directed promotion programs. A number of research reports and theoretical essays published over the years have directly or indirectly dealt with tourist motivation, but much of the previous research was focused on the attitudes of locals and residents to tourism development-related issues, rather than tourist behavior and demand in Korea. In this regard, issues such as visitation patterns, visitor behavior, visitor motivation, and benefits sought have largely been overlooked in the current empirical rural tourism literature. Of particular interest is the identification of unique market segments on the basis of the different motivations of tourists in rural areas. So far, demographic and socio-economic characteristics have mainly been used as the basis of segmentation. However, the predictive power of age, gender, and wealth to affect purchasing behavior is markedly situation-dependent, because they are only indirectly related to purchase intentions. Therefore, marketers have increasingly pointed out that the most effective predictor of tourist behavior should be the behavior itself, including benefits and motivations (Goeldner and Ritchie, 2003, Johns and Gyimothy, 2002 and Kotler et al., 2003). In this connection, the profiles of different rural tourism motivational market segments provide detailed information on the niche markets of rural tourism, and the information on these tourists can be used to develop marketing strategies for rural tourism. Tourist motivations have also been studied extensively in the literature (Bansal and Eiselt, 2004, Crompton, 1979, Dann, 1981, Fodness, 1994, Hanqin and Lam, 1999, Iso-Ahola, 1982, Josiam et al., 2004, Kozak, 2002, Nicholson and Pearce, 2001, Oh et al., 1995 and Uysal and Jurowski, 1994). However, few studies have specifically considered motivation in rural tourism, and the resulting segmentation. This study aims to segment and profile the needs of rural tourists, so as to provide a better understanding of rural tourism, by using a cluster market segmentation approach. This study aims at providing tourism marketers with insights into the travel behavior of people living in Korea and helping them in planning appropriate marketing strategies. For researchers, one particular aim of the study is to contribute to the discussion of appropriate market segmentation criteria and the use of multivariate statistical methods in marketing research.