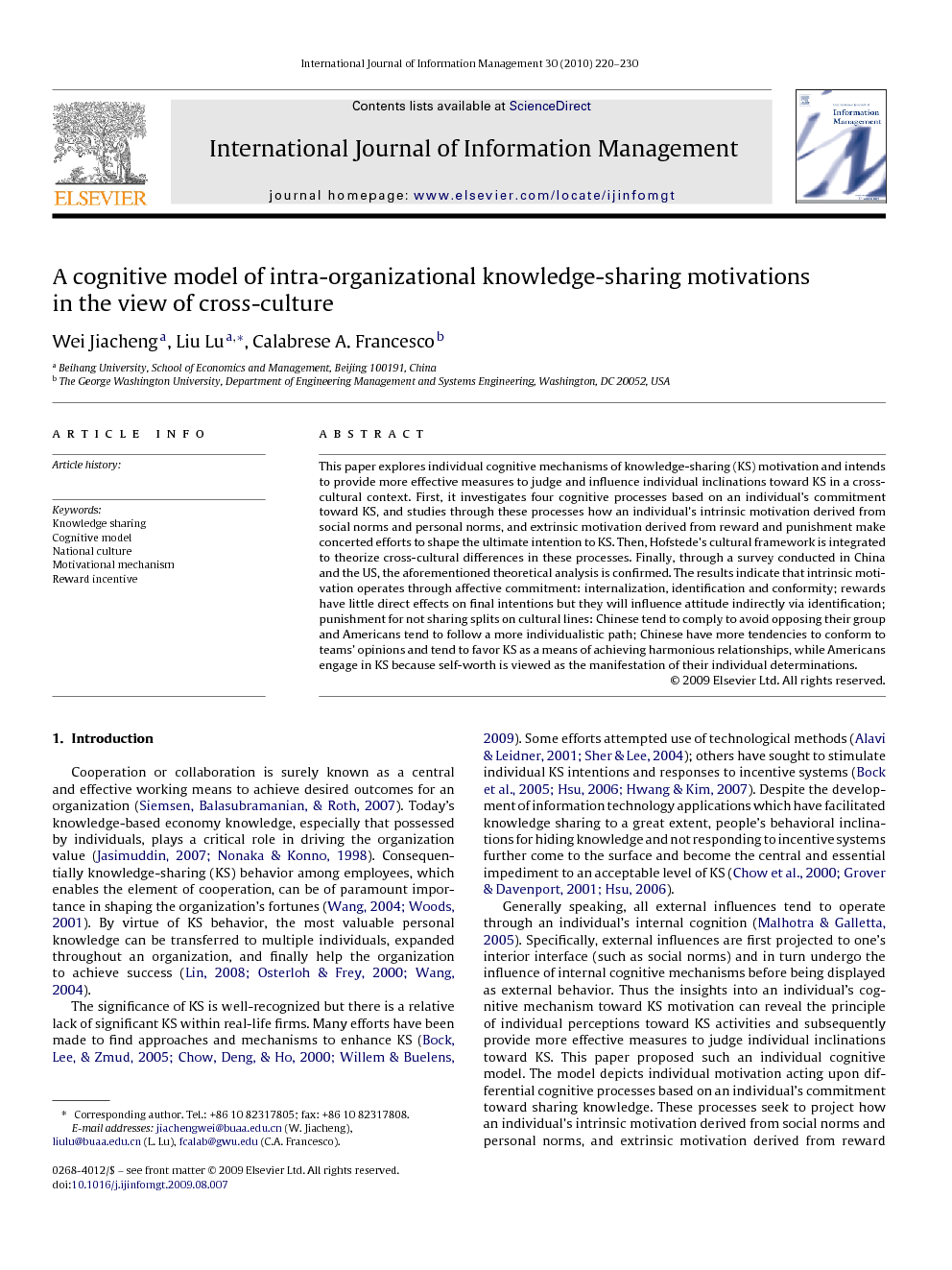 This paper explores individual cognitive mechanisms of knowledge-sharing (KS) motivation and intends to provide more effective measures to judge and influence individual inclinations toward KS in a cross-cultural context. First, it investigates four cognitive processes based on an individual's commitment toward KS, and studies through these processes how an individual's intrinsic motivation derived from social norms and personal norms, and extrinsic motivation derived from reward and punishment make concerted efforts to shape the ultimate intention to KS. Then, Hofstede's cultural framework is integrated to theorize cross-cultural differences in these processes. Finally, through a survey conducted in China and the US, the aforementioned theoretical analysis is confirmed. The results indicate that intrinsic motivation operates through affective commitment: internalization, identification and conformity; rewards have little direct effects on final intentions but they will influence attitude indirectly via identification; punishment for not sharing splits on cultural lines: Chinese tend to comply to avoid opposing their group and Americans tend to follow a more individualistic path; Chinese have more tendencies to conform to teams’ opinions and tend to favor KS as a means of achieving harmonious relationships, while Americans engage in KS because self-worth is viewed as the manifestation of their individual determinations

Cooperation or collaboration is surely known as a central and effective working means to achieve desired outcomes for an organization (Siemsen, Balasubramanian, & Roth, 2007). Today's knowledge-based economy knowledge, especially that possessed by individuals, plays a critical role in driving the organization value (Jasimuddin, 2007 and Nonaka and Konno, 1998). Consequentially knowledge-sharing (KS) behavior among employees, which enables the element of cooperation, can be of paramount importance in shaping the organization's fortunes (Wang, 2004 and Woods, 2001). By virtue of KS behavior, the most valuable personal knowledge can be transferred to multiple individuals, expanded throughout an organization, and finally help the organization to achieve success (Lin, 2008, Osterloh and Frey, 2000 and Wang, 2004). The significance of KS is well-recognized but there is a relative lack of significant KS within real-life firms. Many efforts have been made to find approaches and mechanisms to enhance KS (Bock et al., 2005, Chow et al., 2000 and Willem and Buelens, 2009). Some efforts attempted use of technological methods (Alavi and Leidner, 2001 and Sher and Lee, 2004); others have sought to stimulate individual KS intentions and responses to incentive systems (Bock et al., 2005, Hsu, 2006 and Hwang and Kim, 2007). Despite the development of information technology applications which have facilitated knowledge sharing to a great extent, people's behavioral inclinations for hiding knowledge and not responding to incentive systems further come to the surface and become the central and essential impediment to an acceptable level of KS (Chow et al., 2000, Grover and Davenport, 2001 and Hsu, 2006). Generally speaking, all external influences tend to operate through an individual's internal cognition (Malhotra & Galletta, 2005). Specifically, external influences are first projected to one's interior interface (such as social norms) and in turn undergo the influence of internal cognitive mechanisms before being displayed as external behavior. Thus the insights into an individual's cognitive mechanism toward KS motivation can reveal the principle of individual perceptions toward KS activities and subsequently provide more effective measures to judge individual inclinations toward KS. This paper proposed such an individual cognitive model. The model depicts individual motivation acting upon differential cognitive processes based on an individual's commitment toward sharing knowledge. These processes seek to project how an individual's intrinsic motivation derived from social norms and personal norms, and extrinsic motivation derived from reward and punishment make concerted efforts to shape the ultimate intention to share knowledge. As revealed by many previous studies, individuals from various nations usually hold diverse cognitive mechanisms influenced by national cultural norms, which as the antecedent of individual beliefs and values predispose employees to certain behavioral attitudes and intentions (Ford et al., 2003, Hofstede, 1980 and Srite and Karahanna, 2006). Though employee motivation toward KS has been the subject of much academic research, this sort of research has mainly consisted of single-country studies (Bock et al., 2005, Hsu, 2006, Taylor, 2006 and Willem and Buelens, 2009). The economic globalization trend urges continual interaction among different nations, which in turn intensifies the multicultural conflicts in knowledge sharing and management (Hofstede and Bond, 1988 and Zakaria et al., 2004). Hofstede (1994) postulated that cultural values shape theories and practices of organizational management. Furthermore, Hofstede (1993) pointed out that the present view of management was established in the western-oriented frame of reference, especially the Anglo-American/North American orientation. Although that view generally continues to prevail today, those concepts of management are no longer viewed as universally applicable. Under this perspective the “best” western-style knowledge-sharing practices and management control tools can be ineffective or even dysfunctional in non-western environments (Chow, Kato, & Merchant, 1996). Consequently, organizational practices to enhance employees’ knowledge sharing under non-western cultural contexts should be explored. This study seeks to transcend single-culture KS motivation research and take the influence of cross-cultural background into account. It specifically contributes to the following two aspects: (1) It offers a cognitive model to present how individual motivation operates through differential cognitive processes to output the final intention to KS. The model can integrate the functional mechanisms of both intrinsic and extrinsic motivation “through the eyes of action subjects”. Thus it can deepen our understanding of KS motivation mechanisms and intention formation. (2) It integrated Hofstede's (2001) multidimensional national cultural framework to theorize cross-cultural differences in the KS cognitive mechanisms and shed light on the direct and moderating effects of national culture. Consequentially, it can provide researchers and practitioners with the in-depth understanding of how people from different national cultures perceive KS motivation and shape their final attitudes and intentions to KS in different ways. Given the salient gap between Anglo-American and Chinese-based cultures and the influence of their intercultural and intra-cultural economies in the global environment (Chow et al., 2000, Hofstede and Bond, 1988 and Huang et al., 2008), our study conducted an empirical investigation on equivalent sample populations from both the USA and China, which were respectively projected as cross-sections of Anglo-American and Chinese-based cultures. The survey found strong support for both the cognitive model and the proposed hypotheses associated with cross-cultural differences on this model. The findings from this study should have far reaching theoretical and pragmatic implications for global perspectives. Especially we expect that they will be of particular value for the design and implementation of subtle management systems to boost KS in consonance with diverse cultural backgrounds (Tsui, 2001). The remainder of this paper is organized as follows. In the next section, the theoretical bases of the study are described, correspondingly the research model and the research hypotheses are proposed. The third section describes our research methods. The fourth section discusses our research findings, and their implications for research and practice. The last section concludes with the study's limitations and proposes the future research possibilities.