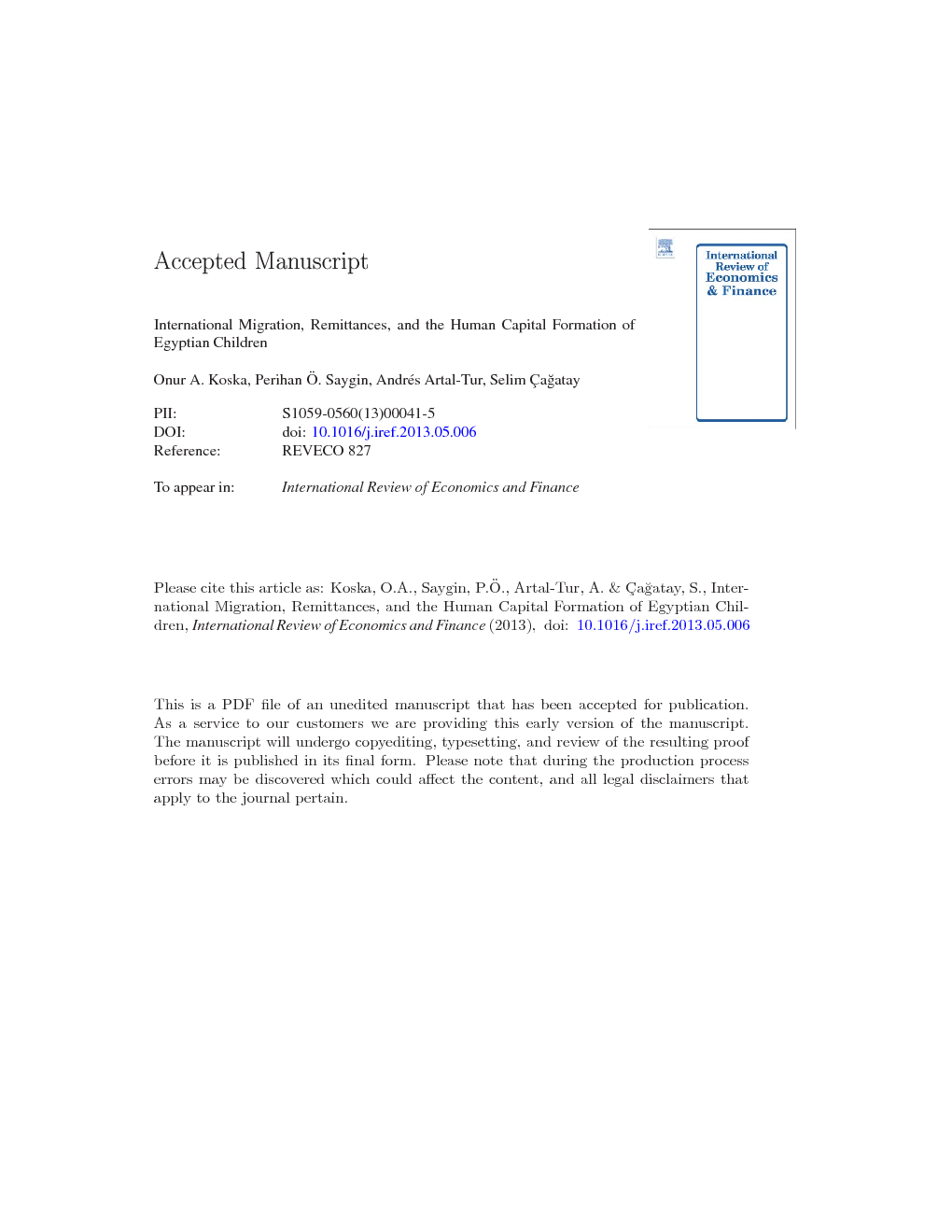 We study the roles that migration and remittances play in the human capital formation of children in Egypt. Our estimations reveal a significant association between remittances and human capital formation: the higher the probability of receipt of remittances, the higher the probability of school enrollment, and the older the age at which children enter the labor force. Although, with regard to the likelihood of school enrollment and the age of the first participation in the labor force, the family disruption effect of migration dominates the income effect of remittances, the likelihood of labor force participation decreases even in households from which both parents migrated.

In the past three or so decades, countries have become significantly integrated, not only through international trade and investment but also through the movement of people. According to estimates of the World Bank and the United Nations, currently more than 215 million people live outside their countries of birth, typically sending home remittances, the effect of which, especially on source countries' development, has become increasingly important. This study, thus, scrutinizes the role of such migration and remittances in human capital formation of children and in child labor. We focus on Egyptian children that are left behind by a migrant parent, or by both parents. There are different channels through which migration of a household member affects non-migrant household members' human capital formation. Different channels may generate different incentives for schooling/child labor, especially depending on household organization and the economic environment. Remittances have a positive income effect, especially if they overcompensate for the loss of income due to migration, and may, thus, increase the household's consumption of normal goods including education, thereby leading to an increase in the demand for child schooling. Remittances may also have a detrimental effect if they signal that unskilled work can be rewarding, and additional income can be earned independently of schooling (Boucher et al., 2009). Migration may lead to disruption and to the restructuring of roles in the household, increasing non-migrant household members' domestic workload, which increases the opportunity cost of their schooling, decreases the time allocated to schooling, and impairs school performance. The plan of the remainder of this paper is as follows. In the next section, we briefly discuss about Egyptian migration and remittances; we delineate the different channels through which migration affects human capital formation; and we list conditions under which remittances foster human capital formation in remittance-receiving countries and households. In Section 3, we introduce our data, and present descriptive statistics. In Section 4, we delineate our methodology. In Section 5, we present our estimation results. Section 6 concludes.