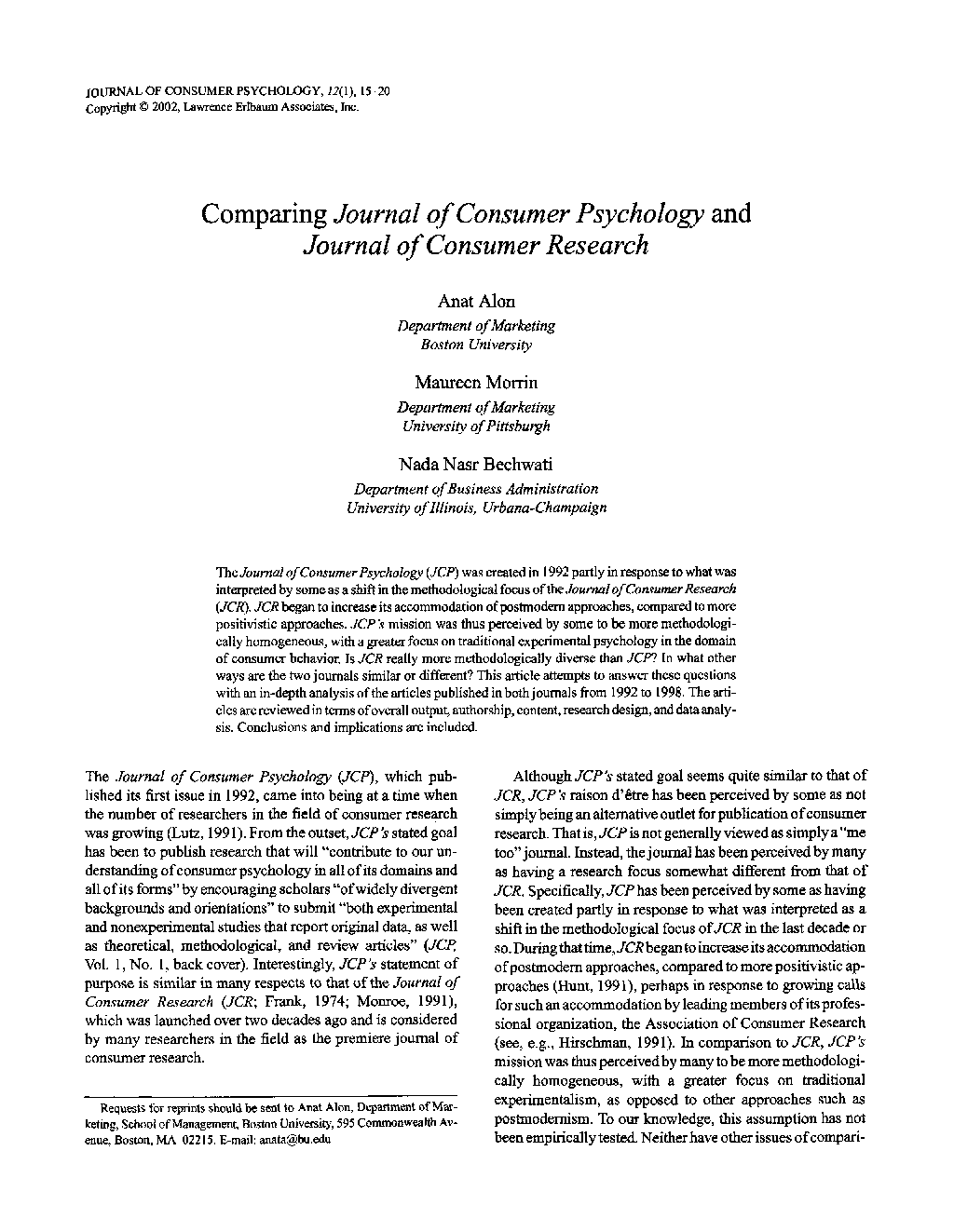 The Journal of Consumer Psychology (JCP) was created in 1992 partly in response to what was interpreted by some as a shift in the methodological focus of the Journal of Consumer Research (JCR). JCR began to increase its accommodation of postmodern approaches, compared to more positivistic approaches. JCP's mission was thus perceived by some to be more methodologically homogeneous, with a greater focus on traditional experimental psychology in the domain of consumer behavior. Is JCR really more methodologically diverse than JCP? In what other ways are the two journals similar or different? This article attempts to answer these questions with an in-depth analysis of the articles published in both journals from 1992 to 1998. The articles are reviewed in terms of overall output, authorship, content, research design, and data analysis. Conclusions and implications are included.

The number of academic journals devoted to marketing has proliferated in the past several decades. The Journal ofMarketing, which used to be the main outlet for publication, has been supplemented by the Journal of Marketing Research, the Journal of Consumer Research, and Marketing Science, to name just a few. This review suggests that a relatively recent addition to this group, JCP, is emerging as arespected journal, as is evidenced by its stabilized publication schedule, its ability to attract researchers from academic disciplines outside ofbusiness, and its willingness to encourage lively intellectual debate. The journal also appears to exhibit increasing methodological rigor in terms of the mean number of studies and mean sample sizes reported in its empirical articles over time. Has JCP maintained a unique place in the universe of marketing journals? The results of this review suggest that it has. To avoid a head-to-head attack on the market leader in the area of consumer research (i.e., JCR), JCPappears to have pursued a niche or focused strategy. It has not become just a "me too" journal. The results of the current review of JCP's first 7 years ofpublication in comparison to that ofJCR suggest that its positioning to date lies toward the positivist, empirical, and experimental camp (vs. the relativist, interpretivist, and postmodern camp)--witness the focus on laboratory-based experimental studies using student participants, and the relatively smallnumbers ofpostmodernarticles anddiscussions. Based on a citation analysis, Tellis et al. (1999) concluded that JCR was not very diverse, relative to other major marketing journals. In this analysis, we measured diversity in a number of different ways and compared the level of diversity between two more similar journals: JCR and JCR The current analysis suggests that, of the two major journals devoted to publishing research related to consumer behavior, JCR is more diverse in several respects such as content coverage and data analytic approaches. JCe however, is more diverse in terms of the range of authors it attracts from the academic disciplines, with a significantly greater proportion of nonbusiness researchers, particularly those in the basic discipline of psychology.Is JCP less diverse than desired? Journal diversity can be measured in many ways. It could be argued that interdisciplinary diversity is as important or more important than is diversity of content coverage or analytic approach, in assessing journal quality. It is also open to argument whether diversity, in all its forms, should be a primary goal of every major journal in the field. Discovering here that most of JCPS articles are focused on positivistic and experimental type research approaches should not necessarily be interpreted in a negative light. Perhaps, rather than all journals striving for all types of diversity, they should attempt to carve out aniche strategy, deciding in what ways they should be focused (i.e., not diverse) and in what ways they should be diverse. We would suggest that it is advantageous for JCP to not simply be a "me too" journal; that is, that it should not necessarily aim for the same types of diversity as other journals such as JCR. The issue of journal positioning is critical. Given that where we publish plays an essential role in defining who we are in an academic field, the way a journal positions itself will likely impact the body of researchers it draws. Hence, whether the decision is to be more diverse or more focused on one or more of the attributes discussed herein, active measures should be taken to support this decision. Although the question of whether the mission of a journal is defined by what it strives (or aspires) to be or by what it ends up being, that is, de facto, remains to be answered, having a factual r e view of what it has been is definitely a prerequisite to review this mission. This article constitutes an attempt to tell the JCPstory the way it is, that is, to provide a factual review.