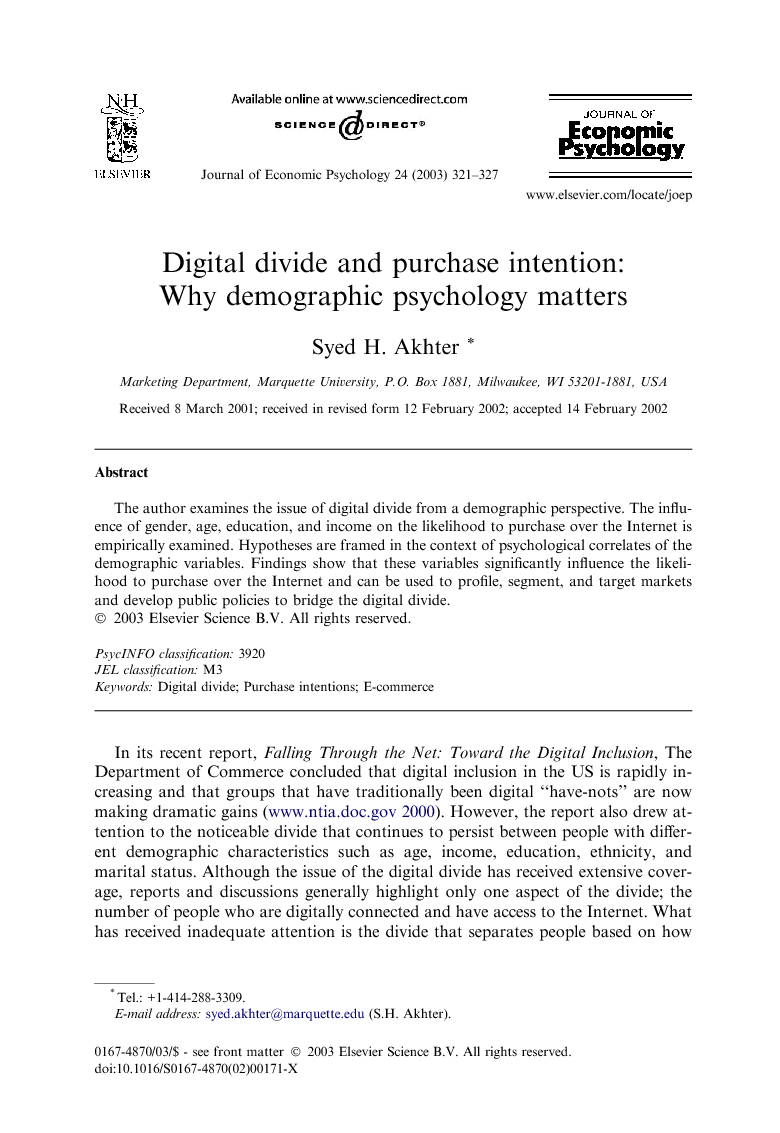 The author examines the issue of digital divide from a demographic perspective. The influence of gender, age, education, and income on the likelihood to purchase over the Internet is empirically examined. Hypotheses are framed in the context of psychological correlates of the demographic variables. Findings show that these variables significantly influence the likelihood to purchase over the Internet and can be used to profile, segment, and target markets and develop public policies to bridge the digital divide.

Building on the works of Robertson (1967), Bass (1969), and Rogers, 1983 and Rogers, 1995, scholars have attempted to understand the influence of consumer characteristics on the adoption of new products. Two types of characteristics commonly studied are demographic characteristics (LaBay & Kinnear, 1981; Marks & Hughes, 1976) and personality traits (Brittingham, Goff, & Haring, 1989; Ehrlich & Lee, 1969; Gatignon & Robertson, 1989). Together these studies have enhanced our understanding of the product adoption process, especially of single-use products. With the ongoing crisis in the dot-com business-to-consumer sector, the understanding of relations between demographic characteristics and the use of the Internet, a multiple-use product, is becoming increasingly important. Although there are many descriptive studies of Internet users (Ernst & Young, 2000; Smith & Clurman, 1997), there is a lack of empirical studies focusing on Internet shopping (Particelli & Angela da Rocha, 2001). The study of the Internet is important because, compared to other technological innovations, such as radios, TVs, and cellular phones, the Internet is different both in terms of the demand it places on users’ cognition and willingness to learn to use the product. In particular, the multiple use of the Internet requires an understanding of the technology, the hardware as well as the software. The Internet is a multi-function, discontinuous innovation, and determining the influence of demographics on the likelihood of using the Internet to make a purchase becomes worthy of research.

The issue of digital divide has emerged as one of the critical issues facing businesses and public policy makers. Although the current debates on digital divide focus on the issue of accessibility, the premise of this paper is that the divide focusing on the use of the Internet will become more critical in the future. This paper examined the phenomenon of digital divide from an intra-ethnic perspective. Findings from this study suggest that demographic characteristics and their psychological correlates significantly influence the likelihood of purchasing tickets over the Internet. Overall, the results suggest that males in contrast to females, younger people in contrast to older, more educated in contrast to less educated, and wealthier people in contrast to less wealthy are more likely to use the Internet for purchasing symphony tickets. This profile can be used by marketers to segment and target their customers, and by public policy officials to reach people and encourage Internet usage. A limitation of this study is that the respondents are all symphony goers and thus may not be representative of the overall population. The digital divide will continue to be an important issue for our society. It would thus be theoretically meaningful to see if the relationships obtained in this study generalize to other ethnic groups. As the Internet becomes an integral part of our lives, future studies can explore the social effects of the use of the Internet, and the different reasons for which people use the Internet.