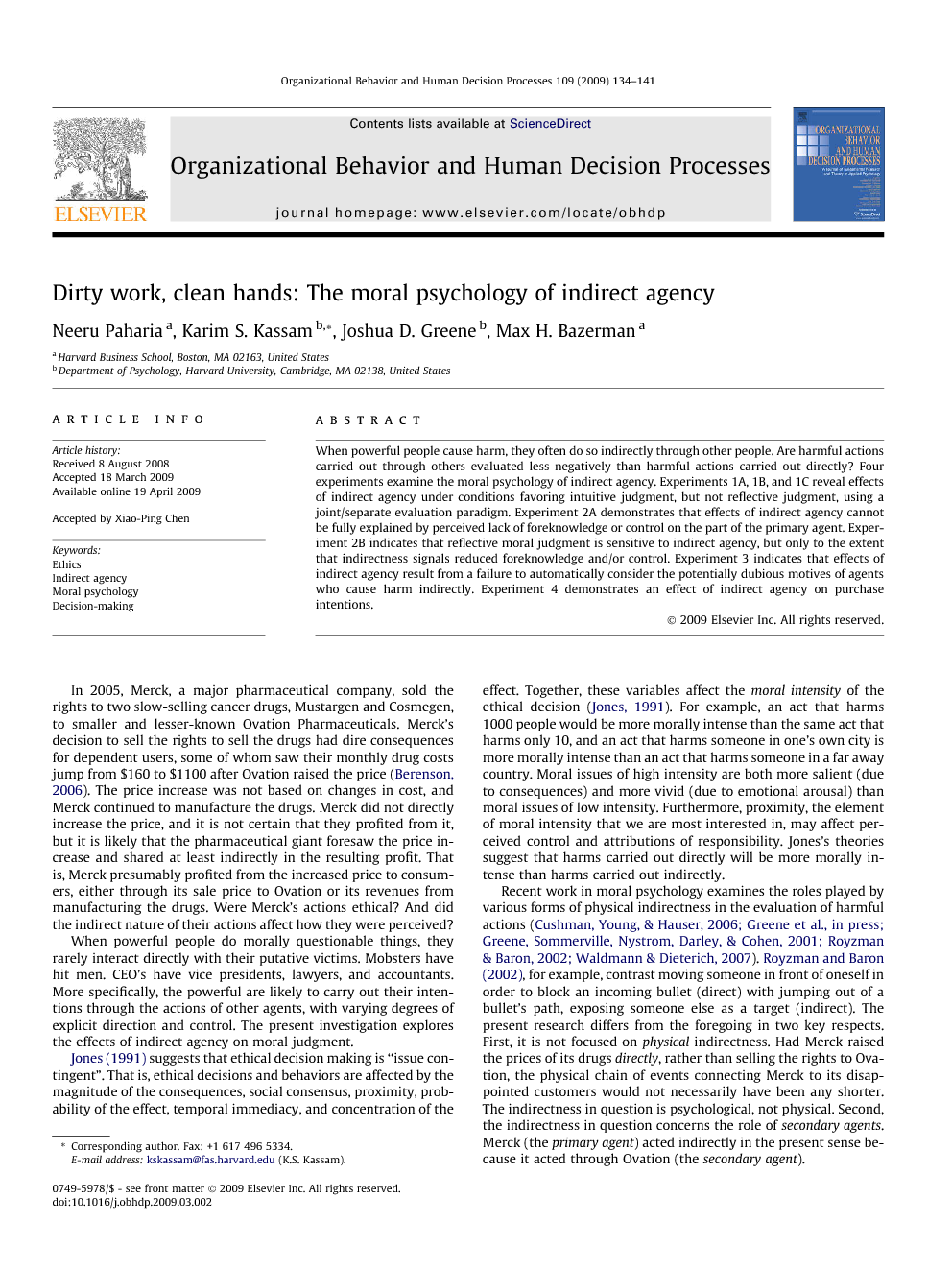 In 2005, Merck, a major pharmaceutical company, sold the rights to two slow-selling cancer drugs, Mustargen and Cosmegen, to smaller and lesser-known Ovation Pharmaceuticals. Merck’s decision to sell the rights to sell the drugs had dire consequences for dependent users, some of whom saw their monthly drug costs jump from $160 to $1100 after Ovation raised the price (Berenson, 2006). The price increase was not based on changes in cost, and Merck continued to manufacture the drugs. Merck did not directly increase the price, and it is not certain that they profited from it, but it is likely that the pharmaceutical giant foresaw the price increase and shared at least indirectly in the resulting profit. That is, Merck presumably profited from the increased price to consumers, either through its sale price to Ovation or its revenues from manufacturing the drugs. Were Merck’s actions ethical? And did the indirect nature of their actions affect how they were perceived? When powerful people do morally questionable things, they rarely interact directly with their putative victims. Mobsters have hit men. CEO’s have vice presidents, lawyers, and accountants. More specifically, the powerful are likely to carry out their intentions through the actions of other agents, with varying degrees of explicit direction and control. The present investigation explores the effects of indirect agency on moral judgment. Jones (1991) suggests that ethical decision making is “issue contingent”. That is, ethical decisions and behaviors are affected by the magnitude of the consequences, social consensus, proximity, probability of the effect, temporal immediacy, and concentration of the effect. Together, these variables affect the moral intensity of the ethical decision (Jones, 1991). For example, an act that harms 1000 people would be more morally intense than the same act that harms only 10, and an act that harms someone in one’s own city is more morally intense than an act that harms someone in a far away country. Moral issues of high intensity are both more salient (due to consequences) and more vivid (due to emotional arousal) than moral issues of low intensity. Furthermore, proximity, the element of moral intensity that we are most interested in, may affect perceived control and attributions of responsibility. Jones’s theories suggest that harms carried out directly will be more morally intense than harms carried out indirectly. Recent work in moral psychology examines the roles played by various forms of physical indirectness in the evaluation of harmful actions (Cushman et al., 2006, Greene et al., in press, Greene et al., 2001, Royzman and Baron, 2002 and Waldmann and Dieterich, 2007). Royzman and Baron (2002), for example, contrast moving someone in front of oneself in order to block an incoming bullet (direct) with jumping out of a bullet’s path, exposing someone else as a target (indirect). The present research differs from the foregoing in two key respects. First, it is not focused on physical indirectness. Had Merck raised the prices of its drugs directly, rather than selling the rights to Ovation, the physical chain of events connecting Merck to its disappointed customers would not necessarily have been any shorter. The indirectness in question is psychological, not physical. Second, the indirectness in question concerns the role of secondary agents. Merck (the primary agent) acted indirectly in the present sense because it acted through Ovation (the secondary agent). Milgram (1974) examined the role of secondary agents in a variant of his classic obedience experiment. He found that subjects were even more likely to shock a victim (when directed by an authority figure) when the subjects were allowed to act through a secondary agent (another confederate of the experimenter) who could be directed to administer shocks to the victim from a remote location. Milgram proposed that the presence of a secondary agent created psychological distance between the subject and the victim, and that this distance reduced the strain on the participant and made disobedience less likely. Milgram’s experiments suggest that the presence of secondary agents can reduce strain for the actor, but do not address the question of how observers perceive harmful actions that are carried out through secondary agents. We conducted four experiments to examine the moral psychology of indirect agency. Experiments 1A, 1B, and 1C document the effects of indirect agency under conditions favoring intuitive vs. reflective judgment. Experiments 2A and 2B aim to determine whether effects of indirect agency result from uncertainty concerning the primary agent’s foreknowledge of, or control over, harmful outcomes. Experiment 3 tests the hypothesis that effects of indirect agency result from a failure to automatically consider the potentially dubious motives of agents who cause harm indirectly. And Experiment 4 moves from judging the ethicality of decisions to the conditions under which indirect agency affects purchase intention.

It is possible that Merck’s decision to sell its cancer drugs to Ovation was entirely innocent. But, if their decision was a deceptive strategy, it may have been more clever than they realized. Acting indirectly through another can hide the fact that one has caused harm, hide the fact that one knowingly chose to cause harm, and hide the extent of one’s control over the harmful outcome. But the present results indicate that causing harm indirectly through another can protect harm-doers, and thus harm society, in a more subtle and insidious way. This is important to know, given that many of the greatest crimes against society are perpetrated by powerful people who carry out their intentions through others. The present results suggest that heightened awareness of people’s sometimes dubious motivations for acting indirectly, and the organizational structures that facilitate them, may be a useful safeguard against the abuse of power.