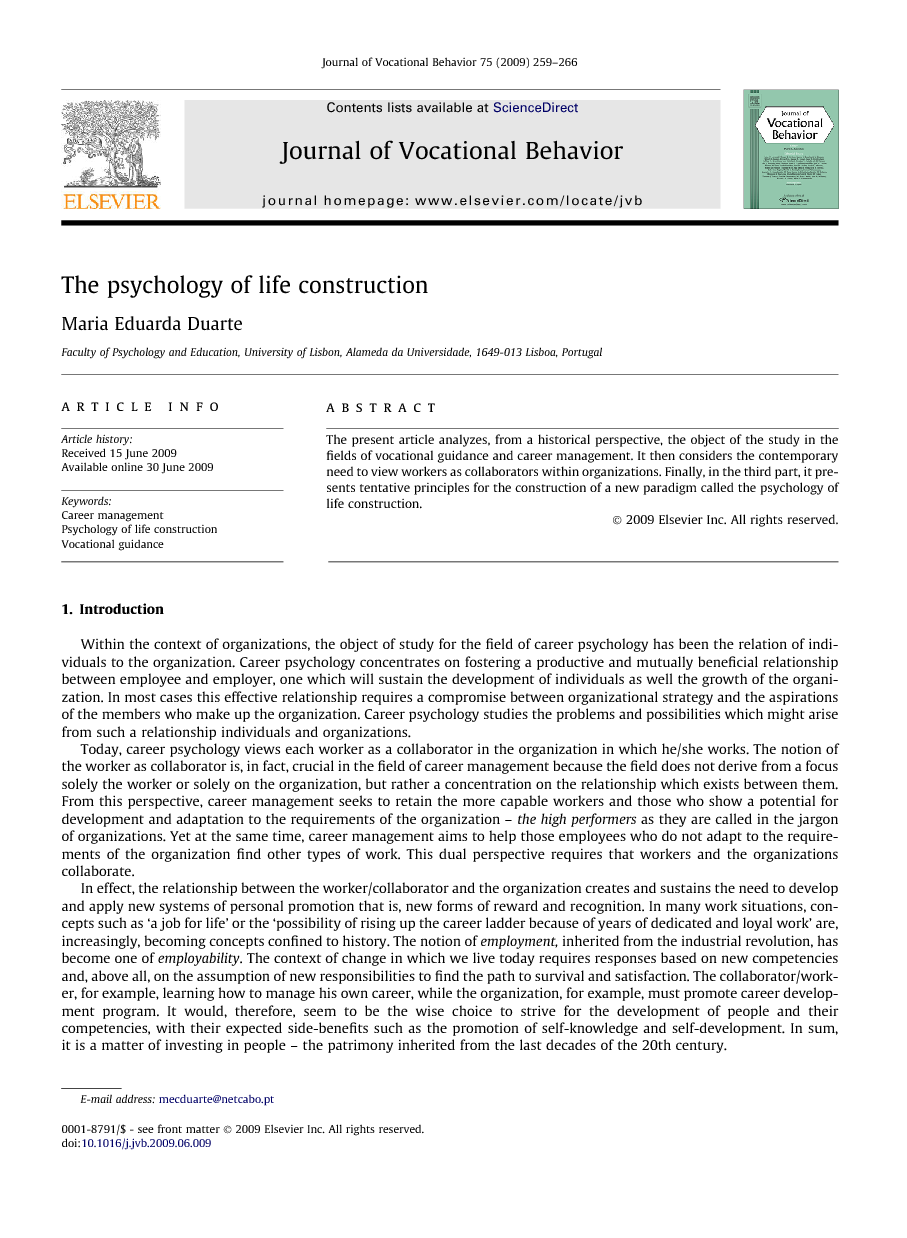 The present article analyzes, from a historical perspective, the object of the study in the fields of vocational guidance and career management. It then considers the contemporary need to view workers as collaborators within organizations. Finally, in the third part, it presents tentative principles for the construction of a new paradigm called the psychology of life construction.

Within the context of organizations, the object of study for the field of career psychology has been the relation of individuals to the organization. Career psychology concentrates on fostering a productive and mutually beneficial relationship between employee and employer, one which will sustain the development of individuals as well the growth of the organization. In most cases this effective relationship requires a compromise between organizational strategy and the aspirations of the members who make up the organization. Career psychology studies the problems and possibilities which might arise from such a relationship individuals and organizations. Today, career psychology views each worker as a collaborator in the organization in which he/she works. The notion of the worker as collaborator is, in fact, crucial in the field of career management because the field does not derive from a focus solely the worker or solely on the organization, but rather a concentration on the relationship which exists between them. From this perspective, career management seeks to retain the more capable workers and those who show a potential for development and adaptation to the requirements of the organization – the high performers as they are called in the jargon of organizations. Yet at the same time, career management aims to help those employees who do not adapt to the requirements of the organization find other types of work. This dual perspective requires that workers and the organizations collaborate. In effect, the relationship between the worker/collaborator and the organization creates and sustains the need to develop and apply new systems of personal promotion that is, new forms of reward and recognition. In many work situations, concepts such as ‘a job for life’ or the ‘possibility of rising up the career ladder because of years of dedicated and loyal work’ are, increasingly, becoming concepts confined to history. The notion of employment, inherited from the industrial revolution, has become one of employability. The context of change in which we live today requires responses based on new competencies and, above all, on the assumption of new responsibilities to find the path to survival and satisfaction. The collaborator/worker, for example, learning how to manage his own career, while the organization, for example, must promote career development program. It would, therefore, seem to be the wise choice to strive for the development of people and their competencies, with their expected side-benefits such as the promotion of self-knowledge and self-development. In sum, it is a matter of investing in people – the patrimony inherited from the last decades of the 20th century. The responsibility of career management, therefore, is of necessity shared; the notions of implication and involvement are determining factors in the web of relationships between the behavior of the individual faced with the management of his/her own career, and the characteristics of the different models of career management which may offer avenues of development. However, not all organizations are prepared to respond to this alternative approach to professional (though personal) development, of its workforce. For example, there will be no participation here by those organizations of a more traditional character where the concept of ‘career’ goes no further than ‘an increase in salary’ or ‘automatic promotion.’ These are relics of industrialization and Taylorist procedures in the ‘scientific’ management of work, whose long history produced such disturbing results as those depicted by Charlie Chaplin in Modern Times (1936). Career management is, consequently, taken here as a process which has recourse to the contributions of different domains of applied psychology, integrating them in such a way as to constitute its own domain whose efficacy will be judged according to its potential to provide effective answers for individuals and organizations. In the next part of this article, an episodic analysis is made of the development of the concept of career since its origin, and of the evolution of the importance given to people within organizational contexts. An exploration is made of the web of relationships and the ever-growing complicity which is now being established between the individual in search of personally satisfying avenues of development, and the organization which brings together a set of conditions in order to establish itself as the mobilizing agent of that search. In the last part of this article, voice is given to new conceptual adjustments. And perhaps a clue to a new paradigm. Finally, I present a challenge for the future.

Taking up a musical metaphor, we can say that theories can function as scores which show all the parts of a musical composition. Each theory seeks to record and systematize in total, the rules applicable to its own specific area. In any theory, in order for the works to be perfect, one should always have a global overview of them. They result from the construction of a new paradigm, of a new way of ordering and systematizing sounds (in music), or (in science) observation notes. This is why a perfect work, in the sense that we consider it complete – whether a piece of music or a scientific thesis – is endowed with internal organization, sustained by the score, or the theory, thus constituting an identifiable and meaningful unity Accordingly, it has more possibility of being heard or of being put into practice. The famous phrase, attributed to Leonardo Da Vinci says that “La pittura è cosa mental” (Painting is a mental thing). This should be inscribed on the controversy surrounding the discussion of what is original – in other words, the essence – or a copy – that is, appearance. Although running the risk of overuse of metaphor, it could be said that, as in painting – or other form of art or human creativity, including science – the career of an individual shares with the artistic spirit this characteristic. It is a mental thing. This interpretation derives from the manner in which the individual grasps reality and adapts to it, without in any way betraying his/her essence, or in other words, his/her personal history is structured, like any other work of human spirit (the “mental thing” in the meaning of Da Vinci’s phrase) it is unique and unrepeatable. It could be said, then, that new paradigms have to consider individual differences as opposed to uniformization which led to, in modern times, the mechanization of behaviors – as if all individuals were copies of a lost original. What does this mean for a psychology of life construction? It seems important to identify idiographic definitions of success, and those mechanisms which underlie them. We must evaluate adaptations the individual makes to the environment. It will be important to specify the components of knowledge acquisition and the level of experience needed for this knowledge to be applied. We will also have to identify the competencies needed in the negotiation of events, and the adaptability by which individuals maintain identity while dealing with the change (Morrison & Hall, 2002). It is a demand to the near future to eliminate the habitats referred to by Savickas and Baker (2005) and it will be, probably, one of the challenges for the near future to (re)integrate the false dichotomies we have drawn in the 20th century: investigation and action, choice and adjustment, guidance and selection, differentialist and developmental perspectives, the study of the individual and of the organization, and the study of education and of industry. Career management and life design psychology must develop the eclecticism shown by vocational psychology at the beginning of the 20th century. We need a domain of applied psychology exactly as required by both the individual and the organization, exactly as required for the understanding of life. This is how understanding can be reached. In this process, psychology assumes the responsibility, which is incumbent upon it, to manage the great inheritance of the last decades of the 20th century, increasing its richness, always considering that construction is only effective if the voice of the individual and the voice of the organization speak in harmony, seeking to anticipate one another in the search for satisfaction.