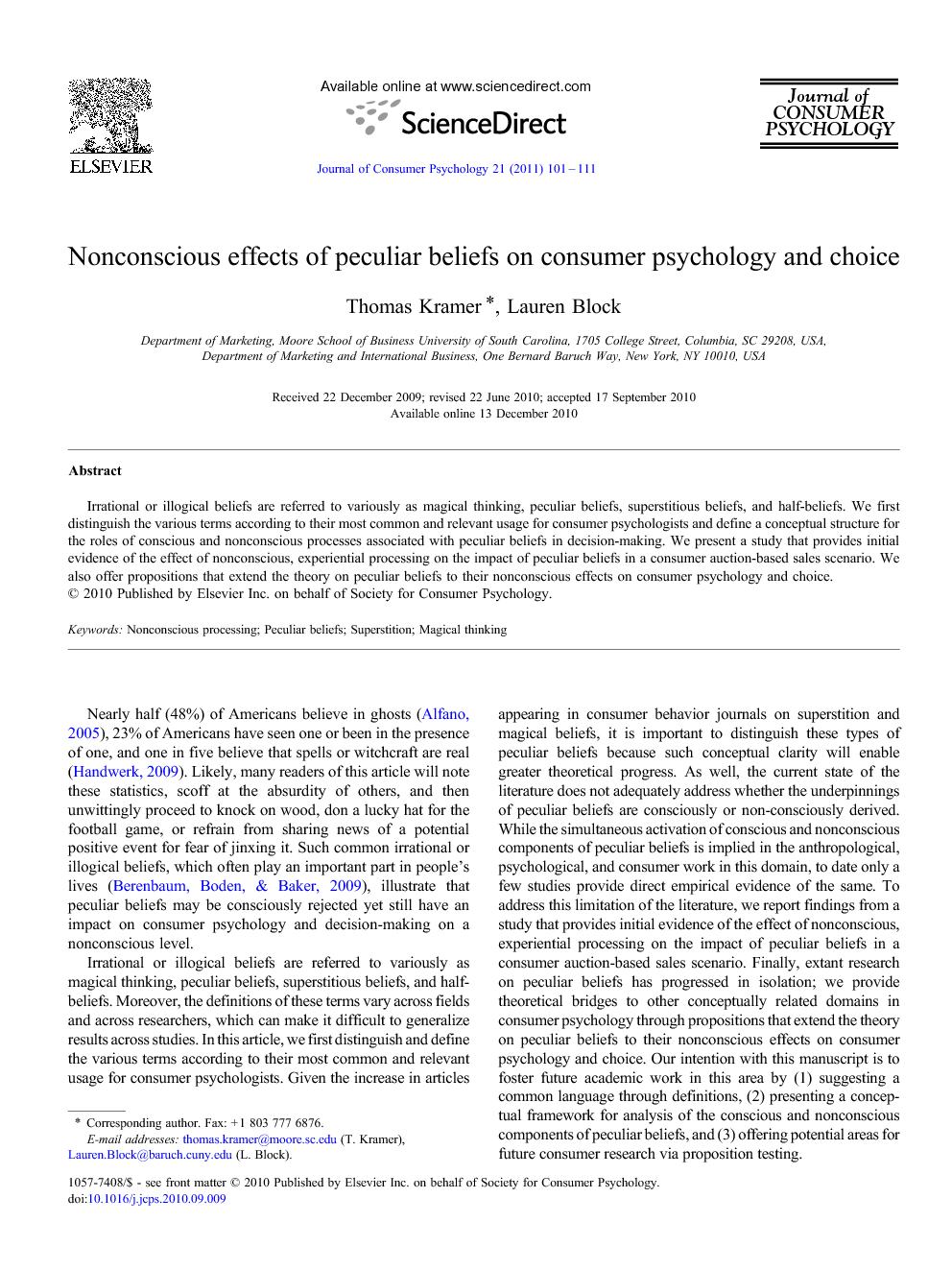 Nearly half (48%) of Americans believe in ghosts (Alfano, 2005), 23% of Americans have seen one or been in the presence of one, and one in five believe that spells or witchcraft are real (Handwerk, 2009). Likely, many readers of this article will note these statistics, scoff at the absurdity of others, and then unwittingly proceed to knock on wood, don a lucky hat for the football game, or refrain from sharing news of a potential positive event for fear of jinxing it. Such common irrational or illogical beliefs, which often play an important part in people's lives (Berenbaum, Boden, & Baker, 2009), illustrate that peculiar beliefs may be consciously rejected yet still have an impact on consumer psychology and decision-making on a nonconscious level. Irrational or illogical beliefs are referred to variously as magical thinking, peculiar beliefs, superstitious beliefs, and half-beliefs. Moreover, the definitions of these terms vary across fields and across researchers, which can make it difficult to generalize results across studies. In this article, we first distinguish and define the various terms according to their most common and relevant usage for consumer psychologists. Given the increase in articles appearing in consumer behavior journals on superstition and magical beliefs, it is important to distinguish these types of peculiar beliefs because such conceptual clarity will enable greater theoretical progress. As well, the current state of the literature does not adequately address whether the underpinnings of peculiar beliefs are consciously or non-consciously derived. While the simultaneous activation of conscious and nonconscious components of peculiar beliefs is implied in the anthropological, psychological, and consumer work in this domain, to date only a few studies provide direct empirical evidence of the same. To address this limitation of the literature, we report findings from a study that provides initial evidence of the effect of nonconscious, experiential processing on the impact of peculiar beliefs in a consumer auction-based sales scenario. Finally, extant research on peculiar beliefs has progressed in isolation; we provide theoretical bridges to other conceptually related domains in consumer psychology through propositions that extend the theory on peculiar beliefs to their nonconscious effects on consumer psychology and choice. Our intention with this manuscript is to foster future academic work in this area by (1) suggesting a common language through definitions, (2) presenting a conceptual framework for analysis of the conscious and nonconscious components of peculiar beliefs, and (3) offering potential areas for future consumer research via proposition testing.