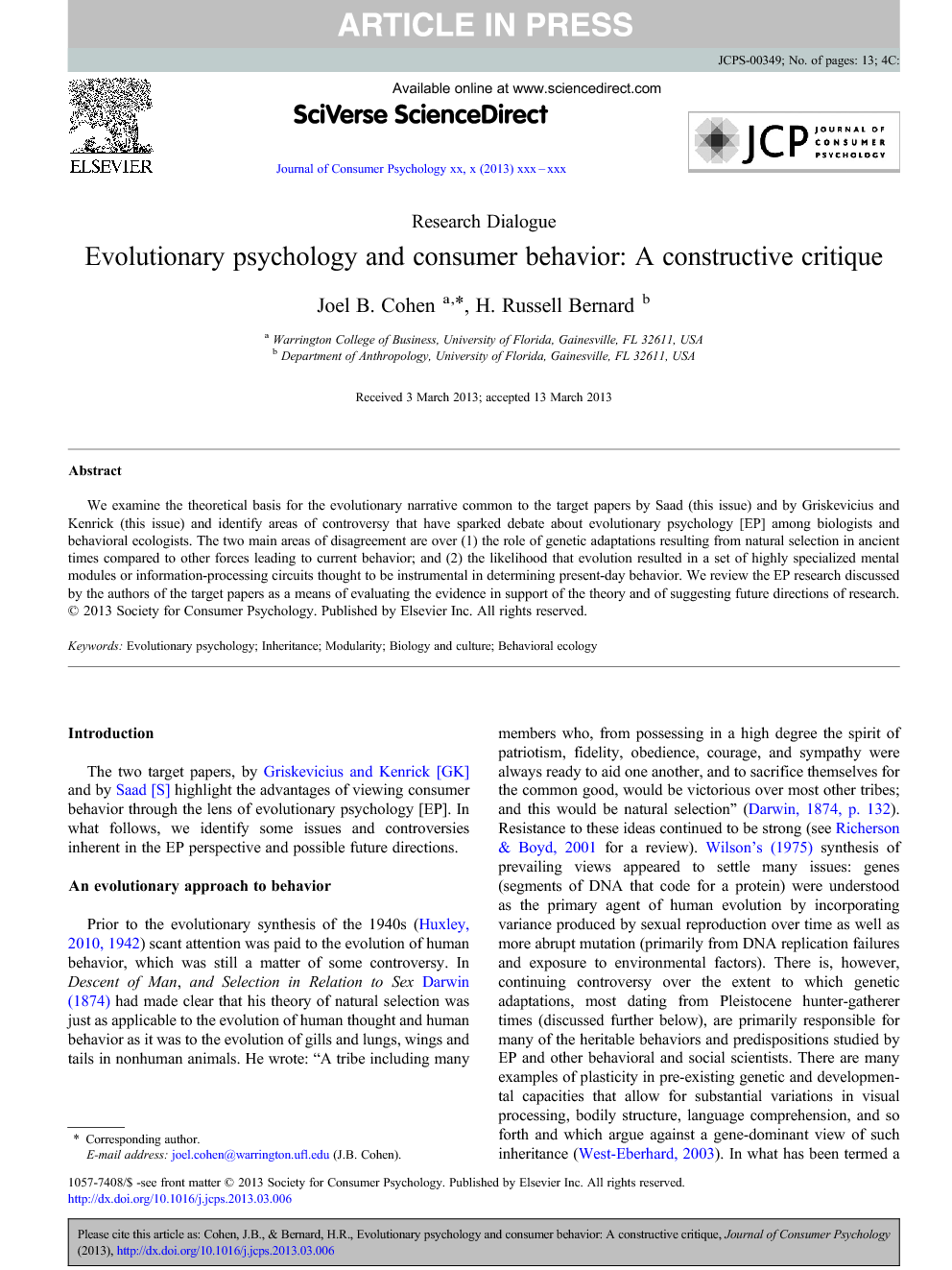 We examine the theoretical basis for the evolutionary narrative common to the target papers by Saad (this issue) and by Griskevicius and Kenrick (this issue) and identify areas of controversy that have sparked debate about evolutionary psychology [EP] among biologists and behavioral ecologists. The two main areas of disagreement are over (1) the role of genetic adaptations resulting from natural selection in ancient times compared to other forces leading to current behavior; and (2) the likelihood that evolution resulted in a set of highly specialized mental modules or information-processing circuits thought to be instrumental in determining present-day behavior. We review the EP research discussed by the authors of the target papers as a means of evaluating the evidence in support of the theory and of suggesting future directions of research.

Prior to the evolutionary synthesis of the 1940s (Huxley, 2010, 1942) scant attention was paid to the evolution of human behavior, which was still a matter of some controversy. In Descent of Man, and Selection in Relation to SexDarwin (1874) had made clear that his theory of natural selection was just as applicable to the evolution of human thought and human behavior as it was to the evolution of gills and lungs, wings and tails in nonhuman animals. He wrote: “A tribe including many members who, from possessing in a high degree the spirit of patriotism, fidelity, obedience, courage, and sympathy were always ready to aid one another, and to sacrifice themselves for the common good, would be victorious over most other tribes; and this would be natural selection” (Darwin, 1874, p. 132). Resistance to these ideas continued to be strong (see Richerson & Boyd, 2001 for a review). Wilson's (1975) synthesis of prevailing views appeared to settle many issues: genes (segments of DNA that code for a protein) were understood as the primary agent of human evolution by incorporating variance produced by sexual reproduction over time as well as more abrupt mutation (primarily from DNA replication failures and exposure to environmental factors). There is, however, continuing controversy over the extent to which genetic adaptations, most dating from Pleistocene hunter-gatherer times (discussed further below), are primarily responsible for many of the heritable behaviors and predispositions studied by EP and other behavioral and social scientists. There are many examples of plasticity in pre-existing genetic and developmental capacities that allow for substantial variations in visual processing, bodily structure, language comprehension, and so forth and which argue against a gene-dominant view of such inheritance (West-Eberhard, 2003). In what has been termed a “paradigm shift,” the science of genetics now sees DNA as dynamic (rather than largely static) and “subject to a wide array of rearrangements, insertions, and deletions” (Charney, 2012, p. 331).